by Editorial
in Exclusive, Featured, Leader Speak
Reading Time: 5 mins read
A A

Silly Monks Entertainment Ltd, founded in 2013, is one of the leading digital entertainment companies in India that got successfully listed in Stock Market. On its second year after going public, Silly Monks has aggressively expanded in South Indian digital entertainment space with its own offices and team of talents propelling the organization towards growth path in its respective markets.

In this Leaderspeak, Anil Pallala, Co-founder & CEO of Silly Monks has shared his future plans for the company.

How was the Journey and progress of Silly Monks after going public?

We are in our second year since going public. Initially, when we started Silly Monks, It was largely 3rd party content distribution and monetization company through YouTube and various digital platforms in order to create multiple revenue streams. So, We were identified as a digital marketing company. However, before going public, we wanted to position ourselves as an entertainment content company rather than just remaining a digital marketing entity.

Coming to YouTube, We have spread our roots so strong in the south market that we are growing at a rate of 40% YoY. Currently we have nearly 700 YouTube channels in our YouTube MCN (Multi Channel Network) . In this 2019, we are introducing the most popular celebrities in south as YouTube creators. Along with YouTube Ad revenue, we are also focused on branded content for our YouTube creators.

In terms of film production, though our 1st project 24 kisses theatrically didn’t meet our viewers expectations fully, but from a business point of  view being present in the digital monetisation space we are recovering our investments through various digital platforms. Movie is now  available on Amazon Prime Video Direct. Today, movies are not just made for theatrical release. They are produced keeping multi-platform deployment in mind. We are now partnered on three more film projects that are under production and are looking promising.

Being a corporate content production company, we also act as executive producers for other corporate companies who wants to produce native films in south.

Today, We have fully expanded in South India with our branches in each market and they are activated in full throttle mode that confides me to proudly say that Silly Monks is the largest Digital Entertainment company in South India. 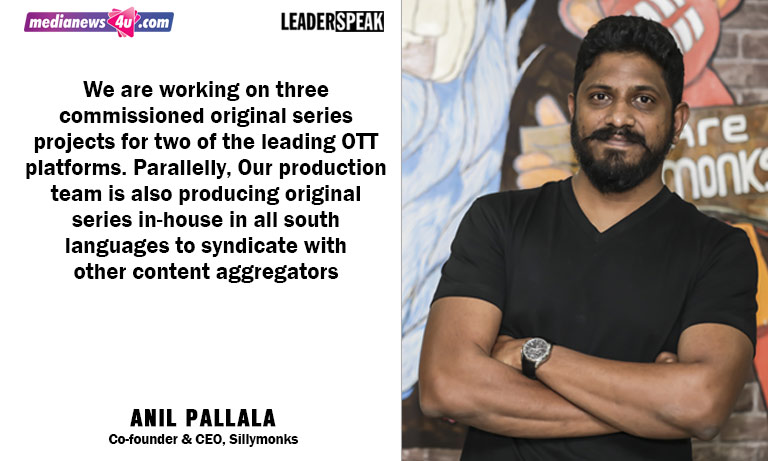 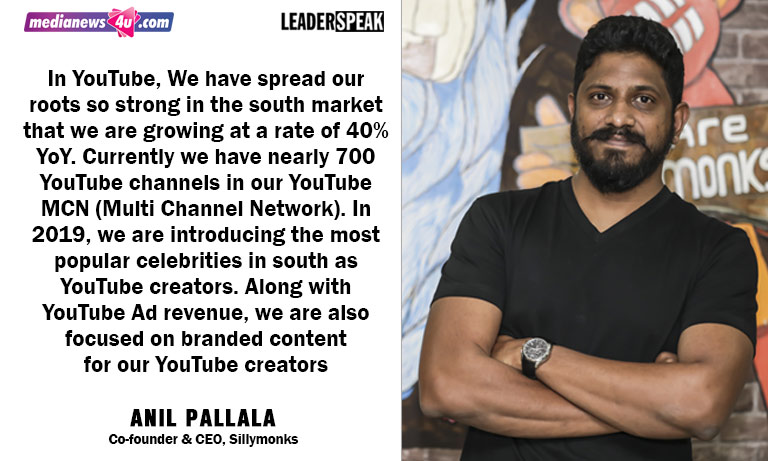 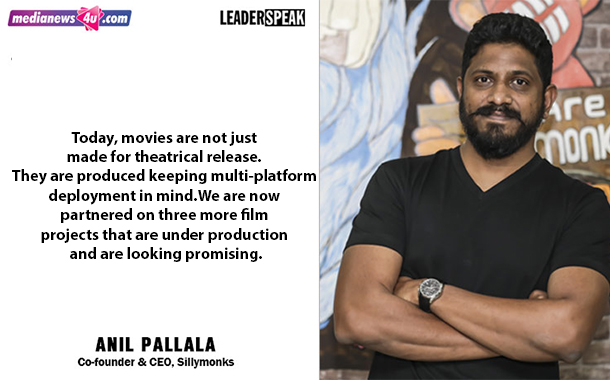 2) Could you brief us on your partnership initiatives with Corporate film Production Companies?

Anil: Media and Entertainment industry has turned out to be a favorite investment destination for many corporates. While they are very successful in Bollywood, they were not able to penetrate similarly in south regional market due to structural and accountability issues. This is where Silly Monks will be acting as a connecting channel between the corporate and the film market by addressing their pain points and offer them end to end solutions from production to distribution with a set process and greater accountability.

Earlier, these corporates came to South markets and returned back due to bitter experiences. Whereas, I am sure that all of them will come back in a few years through Silly Monks.

3) So, how will the Local content Production houses in South benefit out of Silly Monks?

Silly Monks enables the filmmakers to exploit their content to harvest better monetization and exercise various other rights which played underdog till now. All these years content producers did not have much contemplation of what can be done to boost revenues. But today, there are plenty of avenues in digital world to amplify their revenues along satellite and various other rights like air/sea/road Borne.

In addition, Silly Monks also helps the content producers to repurpose their content and unfolds a new IP and generate additional revenue.

4) YouTube is constantly redefining its monetization practices, Will that impact Silly Monks in anyway?

I must say that the recent changes implemented by YouTube had positive impact on us. Like any other network we did not go through that crunch as our YouTube channel acquisition process is quality based.

5) As a YouTube enterprise partner, will you be having edge over others individual channel owners on YouTube. How will they benefit by partnering with you?

Being an enterprise partner our first set of support that we offer is Content copyright protection, network cross promotion, guide them to create brand friendly content to maximise their reach and revenue. There will always be a difference by running as an independent and a group of experts working on a channel leveraging the network’s subscribers.

An individual or small group of content creators will not be able to address all the above parameters, as they won’t have manpower & resources. 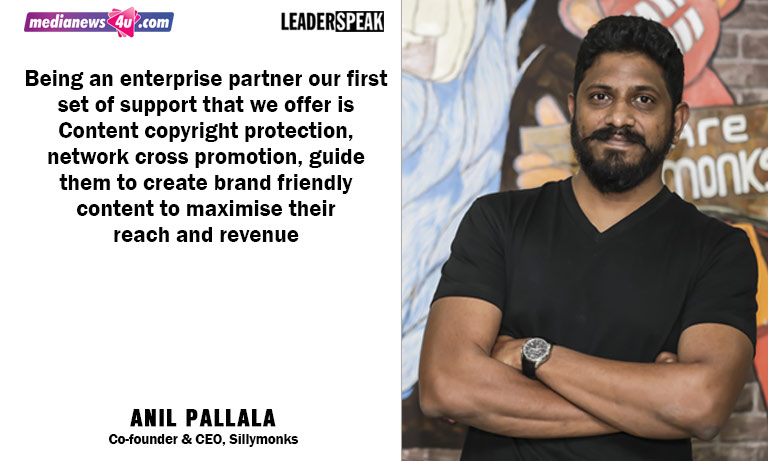 6) Silly Monks is now very strong in South, Do you have plans for Pan India expansion?

South India is one of the biggest markets in the world. After Hindi, Telugu and Tamil are the biggest markets where there is enough content generated. We understand this market better in terms of content valuation and audience pulse  that puts us in front of others.

However, Silly Monks will be expanding its presence in national markets for amplifying our branded content sales force and not to create any content. We are working with so many content creators and we intend to integrate them with brands. Influencer marketing is the big thing for all the brands to penetrate business in regional markets. 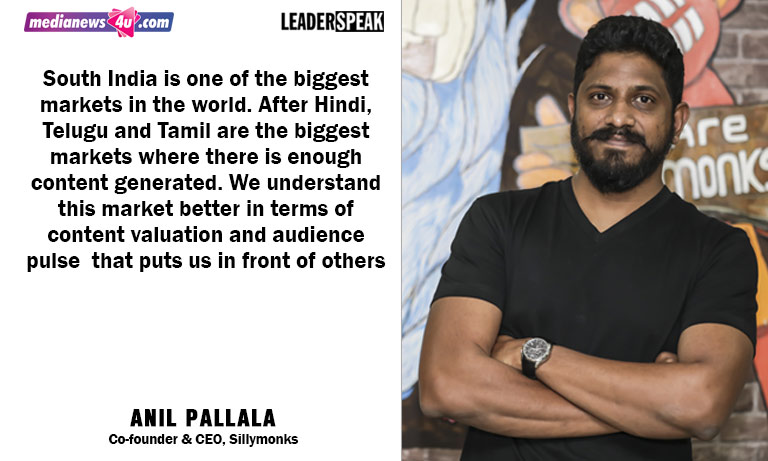 7) Do you have plans to invest in building in-house content team and creating own properties?

All these years we have never been into full-fledged content production, Silly Monks was majorly into distributing content produced by others. This is because of paucity of funds, whereas, after going IPO, we have enough resources to invest towards in-house content team and building our own IP.

Going forward, we will be creating our own IP as we know the last mile of monetisation very well. Our strategy is to design a foolproof project with zero spillovers in spending. As we know the revenue possibilities, the projects will be structured accordingly.

8) You have mentioned earlier that Branded Content and Influencer marketing are the new buzz in digital market; Can you elaborate?

Unlike spots aired or placed in other traditional mediums, Branded Content and Influencer marketing has a high impact  on consumers. This makes them the most sought after campaign mediums for brands to target captive audience. This also comes with a rider that influencers and brands need to be cautious in what they are suggesting to their followers. If anything goes wrong, it will lead to an outrage on the Internet and social media.

Silly monks on its part, trying to create brand friendly influencers who will be aware of their obligations, they will be groomed to be responsible towards the society and also be aware of the brand safety issues.

Branded content and Influencer marketing practices are widely deployed in national market and it is in nascent stage when it comes to South. We will be in the forefront to work with brands and influencers to amplify the scope of the medium in the near future.