Ad volumes of the BFSI sector on Television rose by 2% during Jan-Apr ’21 compared to the same period in the previous year, as per the TAM AdEx report on Banking and Finance Investments (BFSI). In the Television medium, UPstox was the top new brand followed by SEBI during Jan-Apr’21 compared to Jan- Apr’20. More than 150 unique brands appeared for the BFSI sector during Jan-Apr ’21. 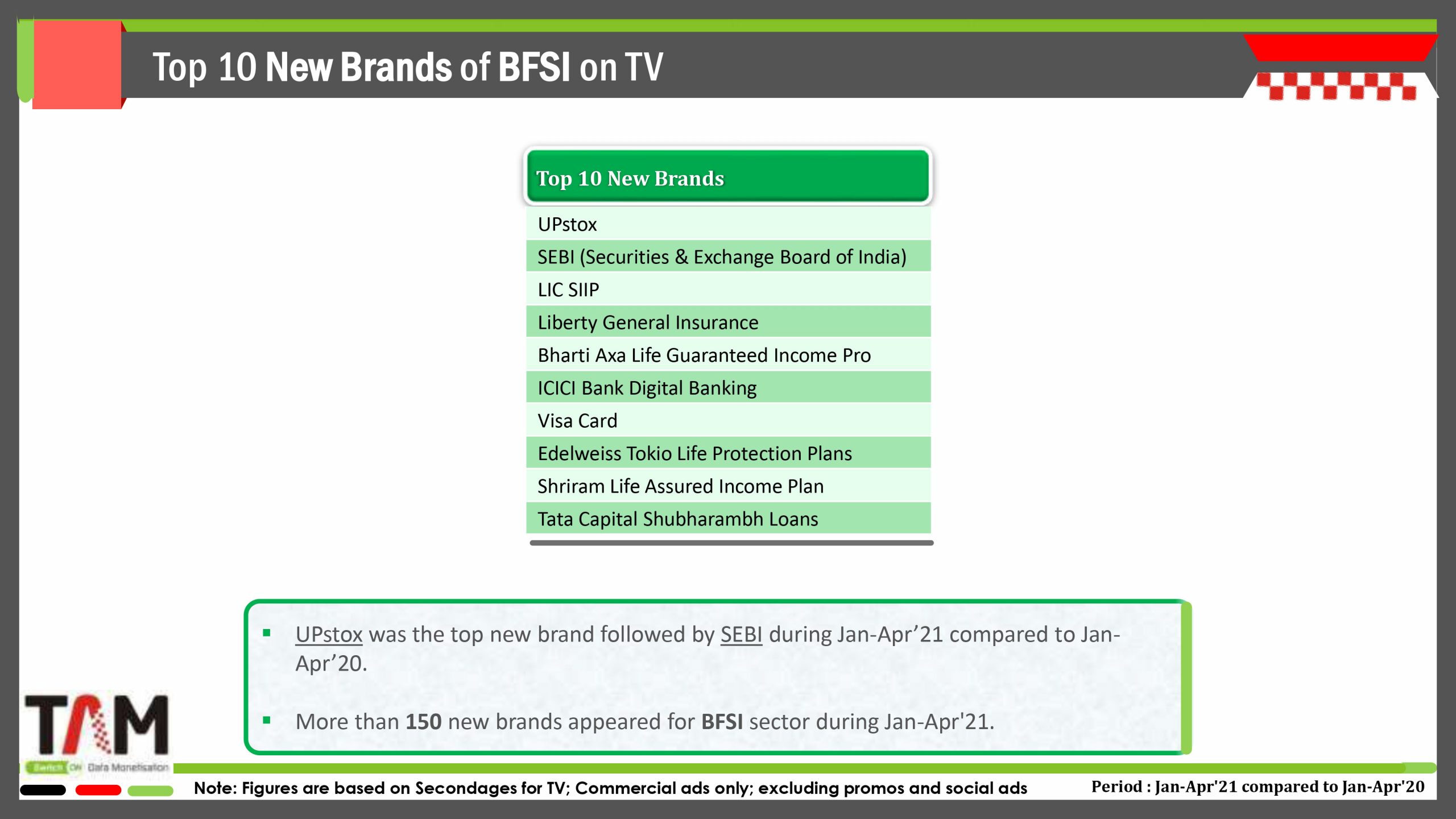 The News genre alone had nearly 70% of the sector’s ad volumes, followed by GEC in 2nd position.  Top 3 channel genres grabbed 90% of ad volume share for the BFSI sector during Jan-Apr’21. 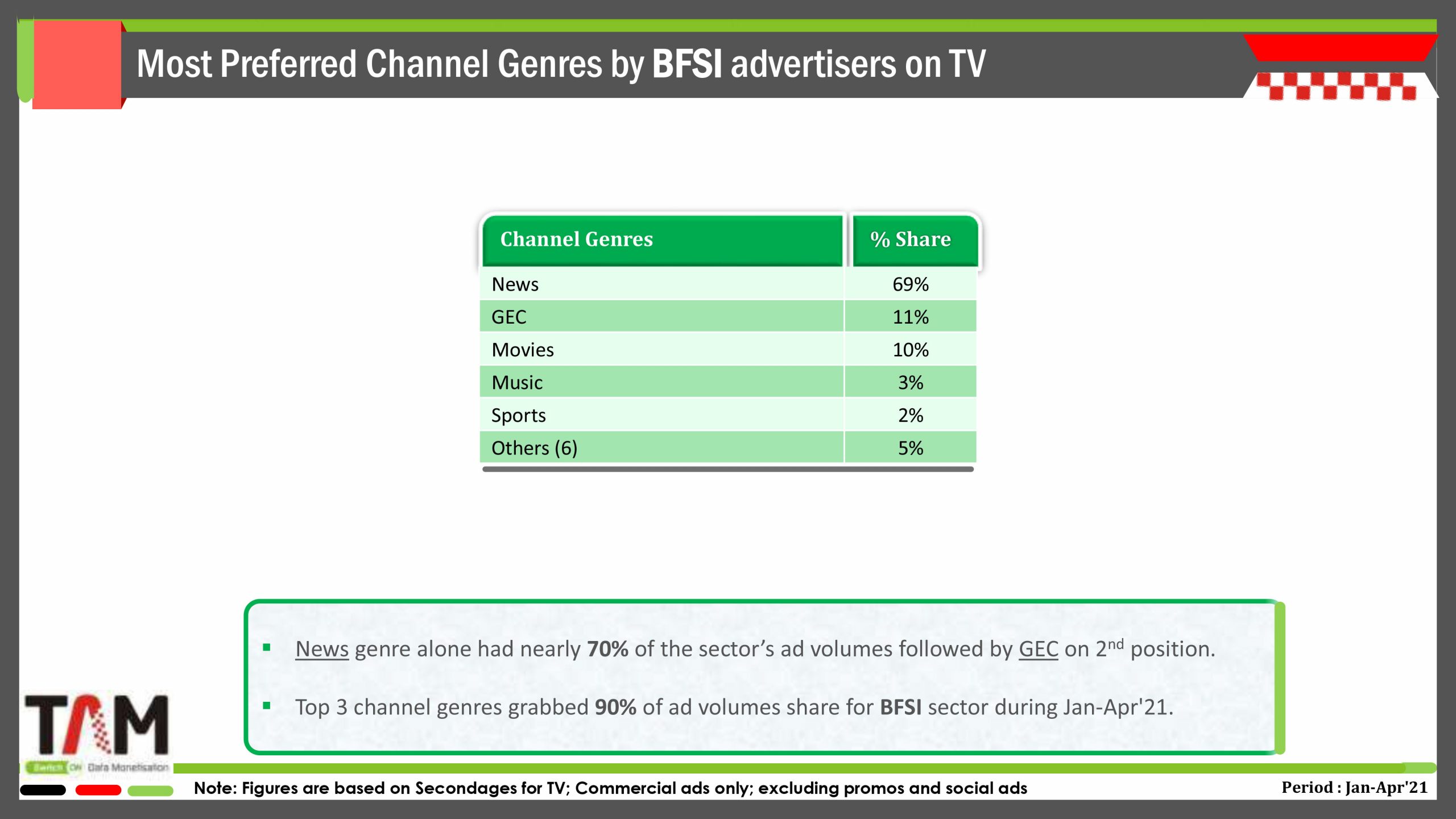 Prime Time was the most preferred time band on TV, followed by Afternoon.

Together, the Prime Time, Afternoon, and Morning time bands combined for more than 70% of ad volume.

Print medium witnessed Advertising growth of 49% in Jan-Apr’21 over Jan-Apr’20. LIC of India topped with a 30% share of the sector’s ad space.

Life Insurance topped among the categories of the BFSI sector in Print with 1/4th of the ad space’s share. The top 10 categories added more than 80% of sector ad space during Jan-Apr’21. LIC of India was the top advertiser in the sector with a 30% share of ad space during Jan-Apr’21.  Top 10 advertisers accounted for more than 40% share of ad space. 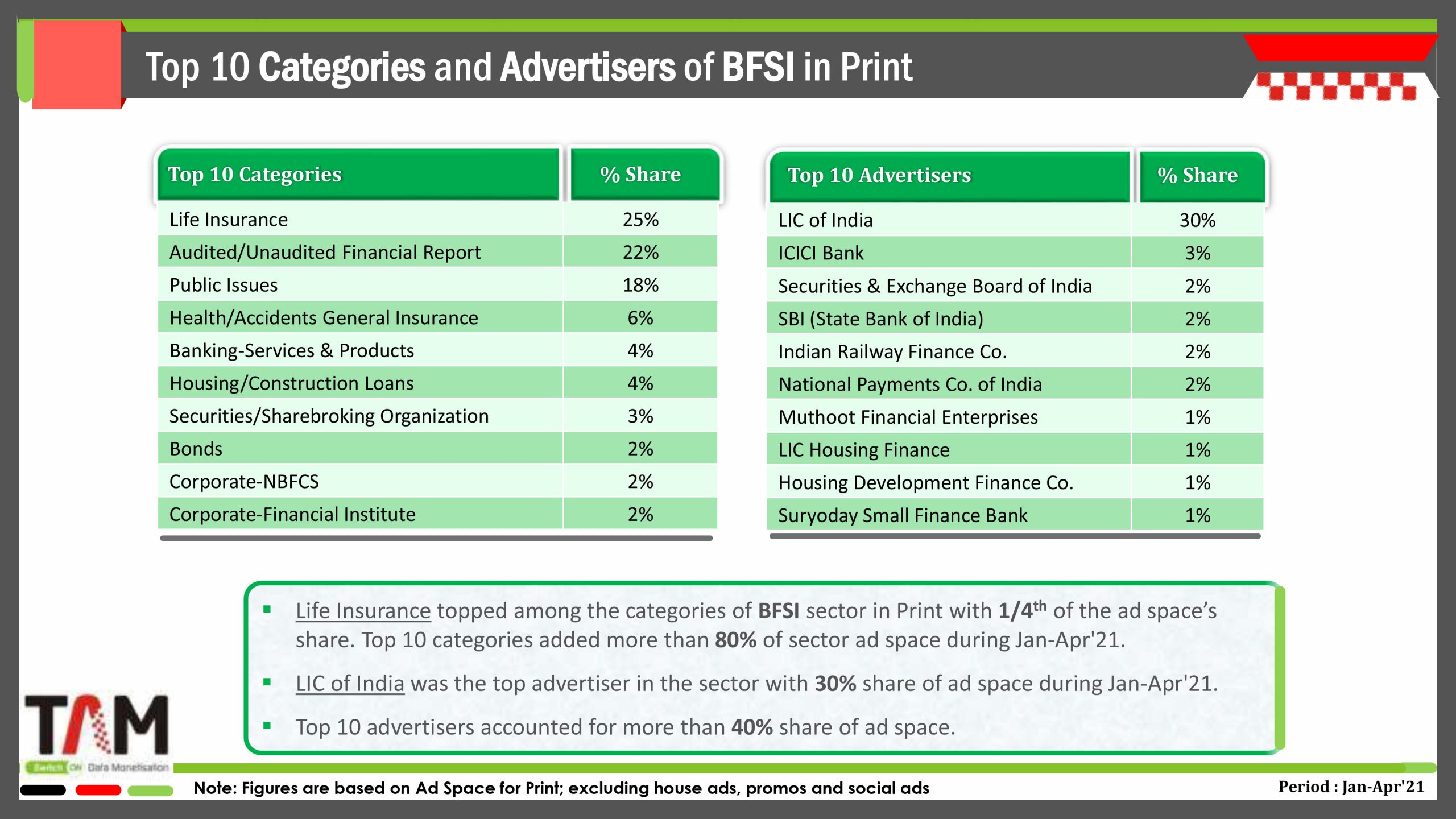 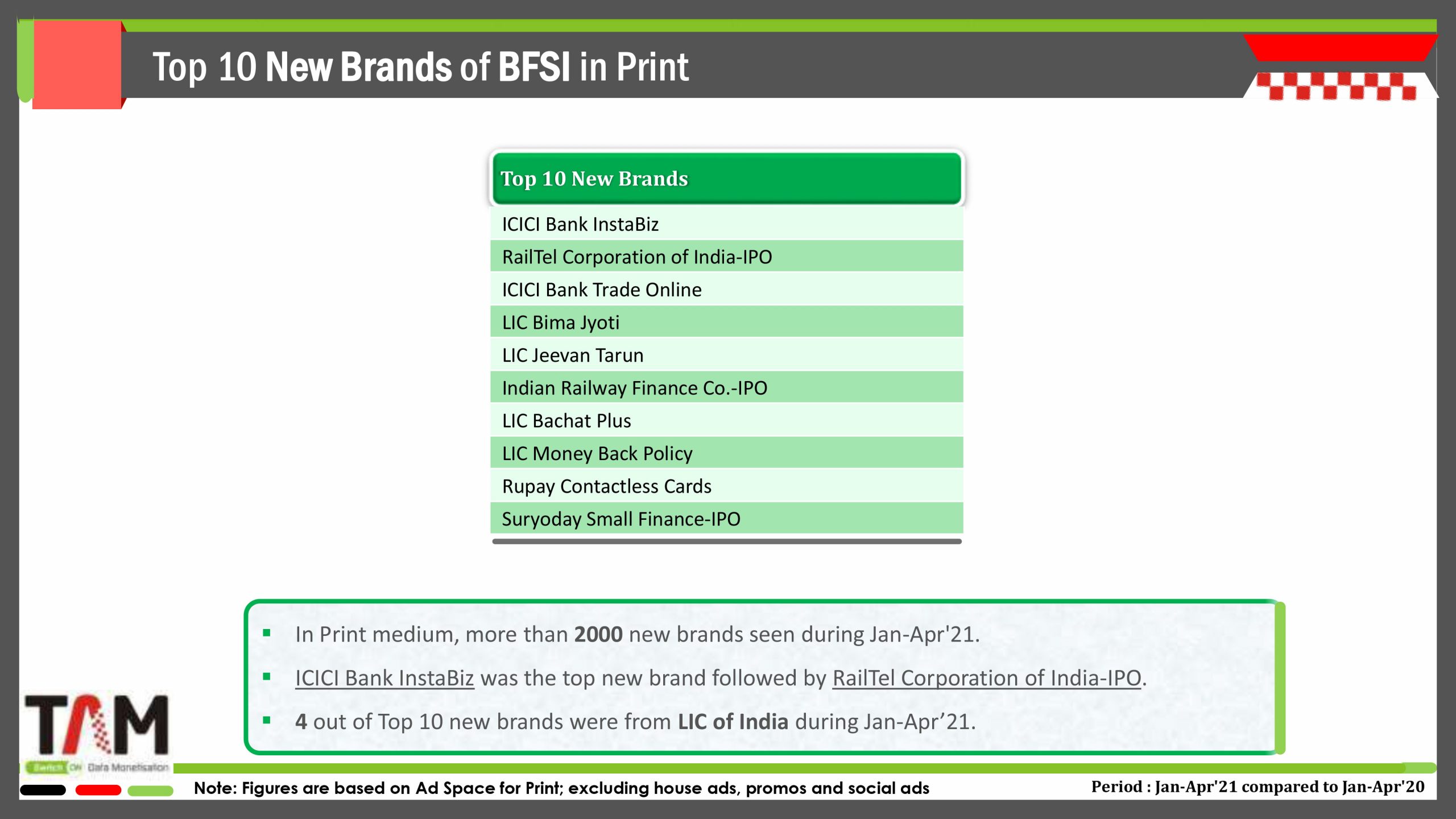 Among 4 zones, South Zone topped in BFSI advertising with 35% share during Jan-Apr’21.  Mumbai & New Delhi were Top 2 cities in overall India for advertising in the sector.

BFSI ad volumes on Radio grew by 27% in Jan- Apr’21 over Jan-Apr’20. The Life Insurance category topped with 33% of the BFSI ad volumes 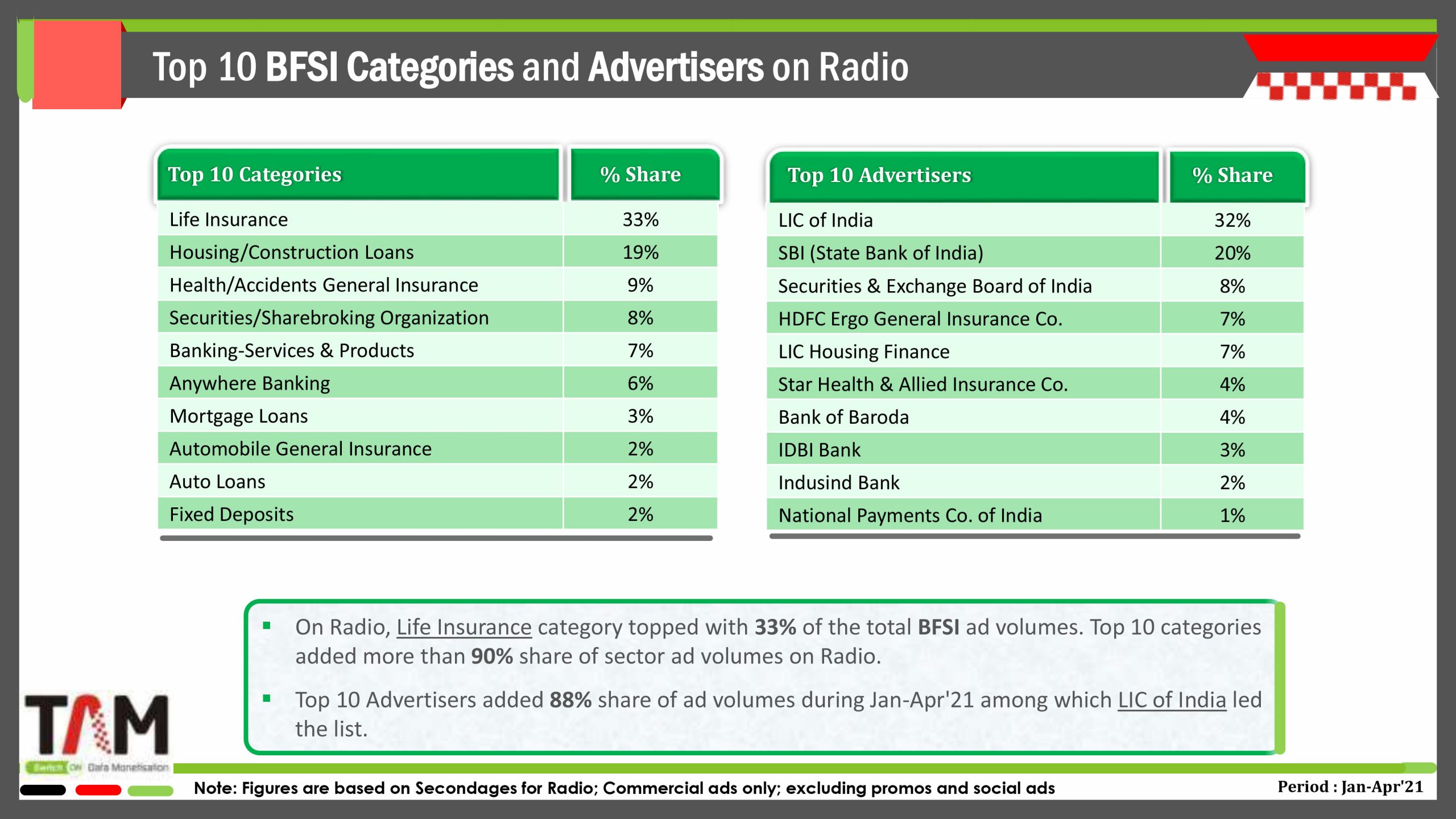 The top 10 categories added more than 90% share of sector ad volumes on Radio. Top 10 Advertisers added 88% share of ad volumes during Jan-Apr’21, among which LIC of India led the list.

SEBI (Securities & Exchange Board of India) was the top new brand on Radio medium, followed by LIC SIIP in 2nd position. 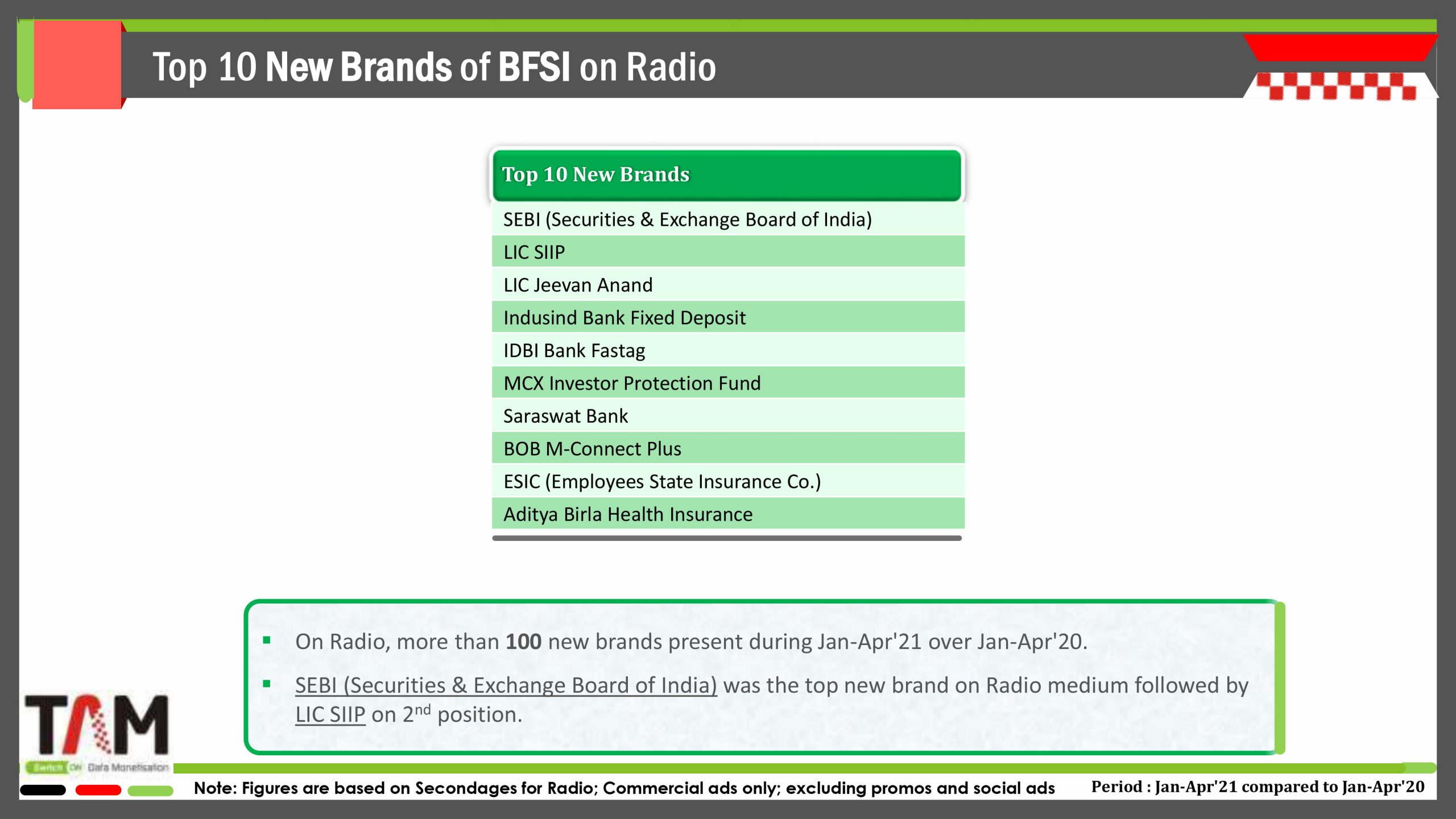 Advertising for the BFSI sector was preferred in the Evening and Morning time-band, combining 87% share of sector ad volumes on Radio.

On the Digital medium, ad insertions increased significantly by 84% during Jan-Apr’21 than in the same period last year. 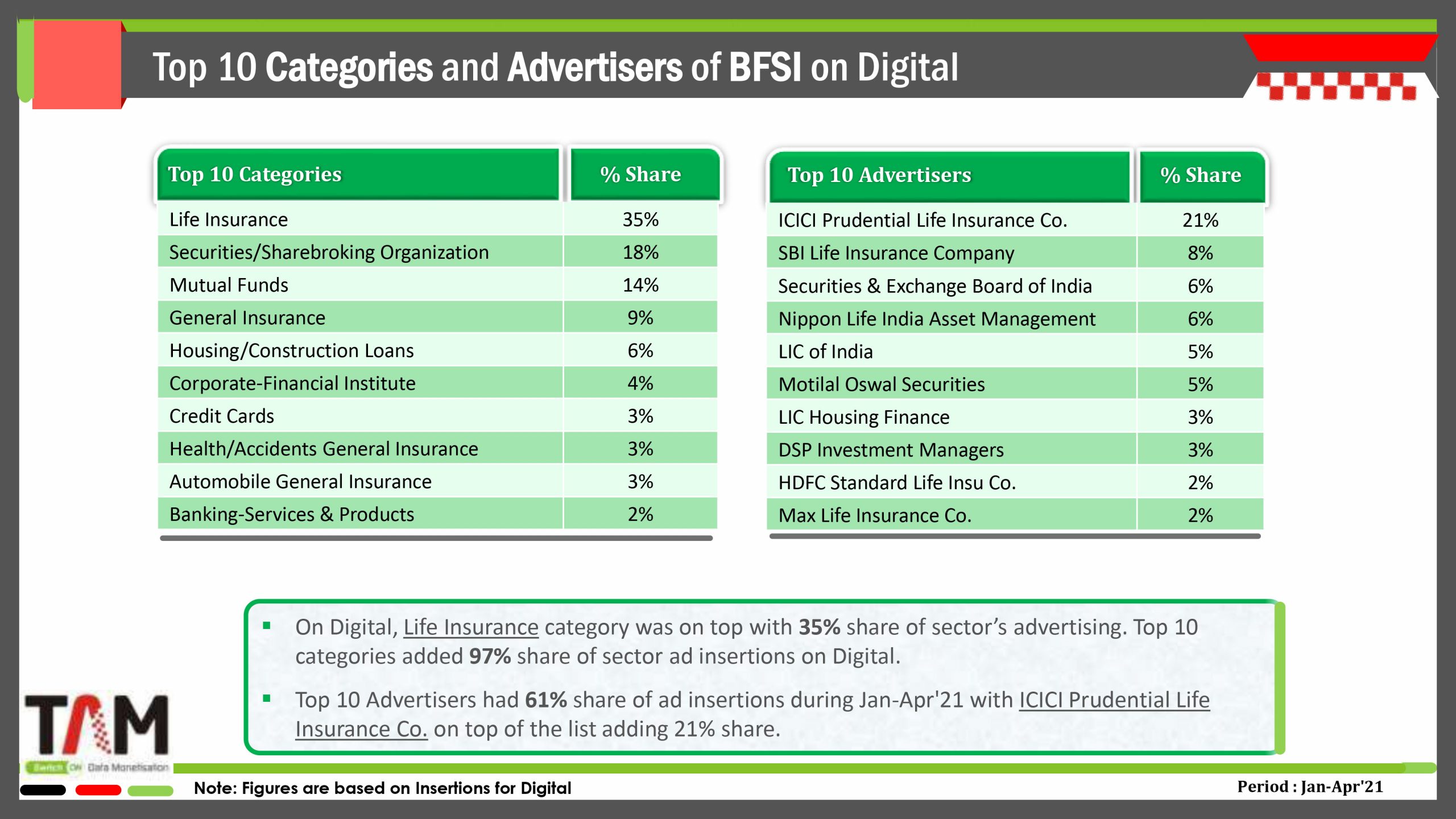 Mumbai: A young IPS Officer Amrita Singh is handed over a special investigation from the past; only to discover her father...

Bangalore: Yodaa, a smart money card and neo bank for teens, designed to empower smart teenagers with the tools to...

Colive will be the most loved brand in the Coliving space with a deep understanding of the customer requirements: Suresh Rangarajan, Colive

The launch of the Tata Sky Binge Mobile app is in sync with our endeavour towards making our products available to a larger stratum of the audience: Pallavi Puri, Tata Sky

Something happened on 24th May; A cue for the India ahead story

We help brands work with the right influencers to help the brands achieve their goals: Pratik Gour, Footprynt