Following a brief pause earlier this year, VIVO Indian Premier League (IPL) 2021 is set to resume on September 19 and is set to enthral its viewers and fans with cricketing action.

Now YouGov BrandIndex, the daily brand health tracker, shows that as fans prepare for the second edition of IPL 2021, the Buzz score for its official streaming partner has been on the rise over the past 30 days. Disney Hotstar’s Buzz score, which measures whether one has heard something positive or negative about the brand in the past two weeks, has increased from 28.4 to 32.9 between 15th August and 9th September 2021.

The increase is more prominent among cricket followers (those who either actively read about the sport, watch it or attend matches in-person). For the same time period, Disney Hotstar’s Buzz score among cricket followers registered an increase of +7.3 points (from +30.8 to +38.1), suggesting that these cricket enthusiasts could be driving the overall buzz for the platform over the last few days. 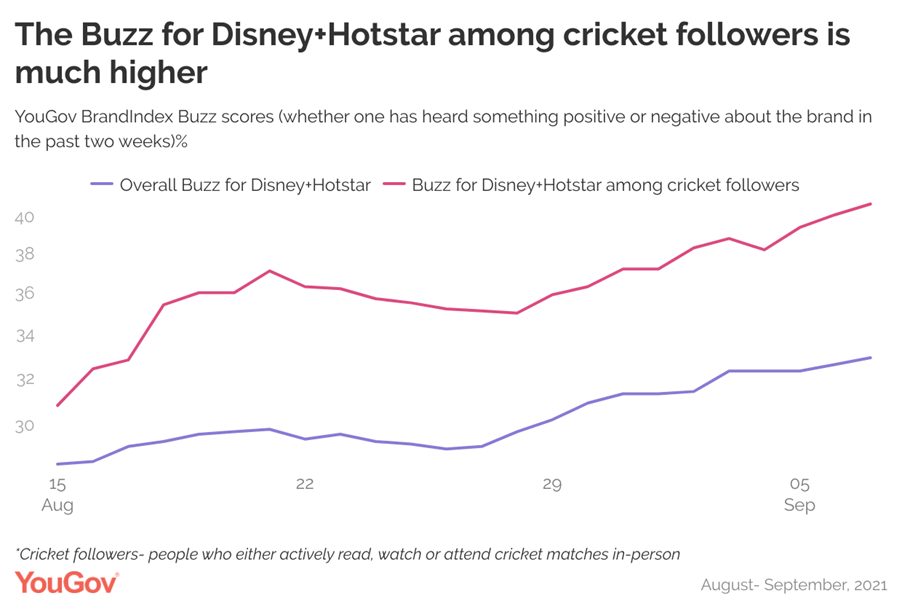 Even among cricket fans, the excitement for IPL is much stronger among the youngest adults than the rest. Between 15th August to 9th September, Buzz score for Disney+Hotstar among GenZ (18-24 years) cricket followers increased by +32.6 points. Whereas for Millennials and Gen X change in score recorded over this time period was +3.3 and +17.1, respectively. 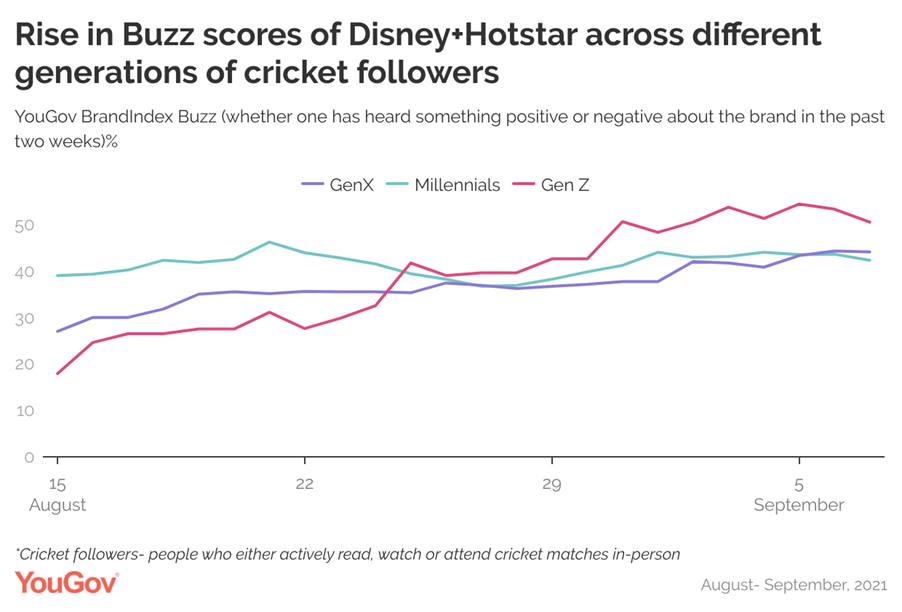 While IPL has a notable presence among the youngsters in the country, the continuous efforts of broadcasters and streaming partners to build interest among fans has helped create noise ahead of launch of the second edition.

Disney Hotstar has not just noted increase in Buzz score but even Word of mouth scores (whether one has talked about the brand in the past two weeks) for the brand among the cricket followers showed an upswing from 30.8 to 35.1 between 15th August- September 9th, further building positive chatter around the brand.

As IPL 2021 second edition is set to commence, YouGov will continue tracking the streaming platform to see if it is able to translate this positive noise into commercial success.