I always feel that work only works if it solves a problem: Swati Bhattacharya, Creative Chairperson, FCB India

SOS Children Villages of India is an independent, non-governmental and non-profit organization working for the holistic development of parentless children, women, and children belonging to vulnerable families. The organization takes notice of the child and announces him as their brand ambassador.

On Children’s Day 2021, a 10-year-old boy – Chatpat, from the streets of Mumbai shares ‘Gyan’ videos around the quirks he learned on the streets. The videos feature him along with his friends, all of who live on the streets. While his videos instantly started winning hearts, there was an underlying message of the harsh reality of a 10-year-old living and surviving on the streets that got noticed. People start taking notice, sharing his content, and also notice the harsh realities of his living condition, way of life on the streets, and lack of education. His videos start getting more attention, shareability, and within two days he amasses a follower base of 20K.

Chatpat meets the children of SOS Villages and with that, we announce the fundraiser campaign -NO CHILD ALONE.

In the next phase, Chatpat starts creating ads for brands and asking them to donate to the cause. As his followers grew, Chatpat created a rap video for the famous rapper KR$NA, where he urged him to reach out to his fans and encourage them to donate.

FCB India and Kinnect in collaboration with SOS Children Villages of India created a campaign to build awareness about the homeless and destitute.

In an exclusive chat with Medianews4U Swati Bhattacharya, Creative Chairperson – FCB India, and Kartikeya Tiwari, National Creative Director – Kinnect talks to us about the campaign, the search for Chatpat, and much more…

The Strategy behind the campaign?

Swati: Chin Si has an incredible body of work in SOS Children’s Villages and is the only Indian on their International Board. When they approach you, it’s an honor and an opportunity to work with someone like that. He had mentioned that SOS is a very quiet organization and works on a ground level, but this time they would like you to do a campaign that widens its reach. He also stated that we had to do the campaign with minimal budgets. However, the beauty of FCB India is that we always look at work as an opportunity to do something different. The Kinnect team had just come on board, and I wanted to work with them. I had done a workshop with them; they have a bright group of sharp young minds. So, I said, let’s do it. Sometimes that is the beauty of low budgets because the currency is passion and nothing else. That became the selection ground for our two big partners – Kinnect and Amit Roy, the director. I had earlier worked with Amit on the ‘SindoorKhela’ campaign. 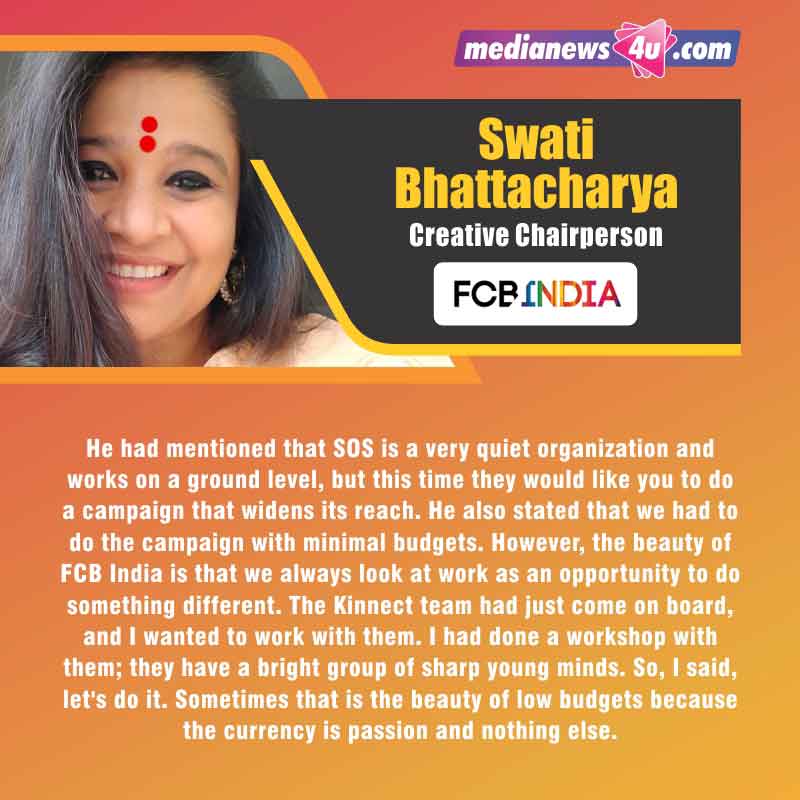 The issue before us was to open people’s heartstrings and purse strings by telling them what a great cause SOS Children’s Villages support and the kind of work they do. To convey all this, we needed a spokesperson, famous enough to rake in people’s attention, but we couldn’t afford a celebrity. So the onus was on us to create this celebrity. But how do we go ahead and create a celebrity? As the child is in the center of SOS’s body of work, we decided to make the child a celebrity. Once we decided on the campaign idea, driving communications for it became easier. This was very different from what I have done in my long career.

Kartikeya: The one thing we wanted to do strategically through this campaign was to expand the roster of corporate donors for the brand. That is where the deep pockets lie. Whilst they generate a lot of donations from individuals every year, awareness amongst the corporate sector about the brand was limited. Now it is a different story; the corporates are aware and participating. Brands like CRED, P&G, and GoodKnight participated, and today their roster boasts of some very big Indian corporates donating. That was one of the strategic aims behind the campaign. 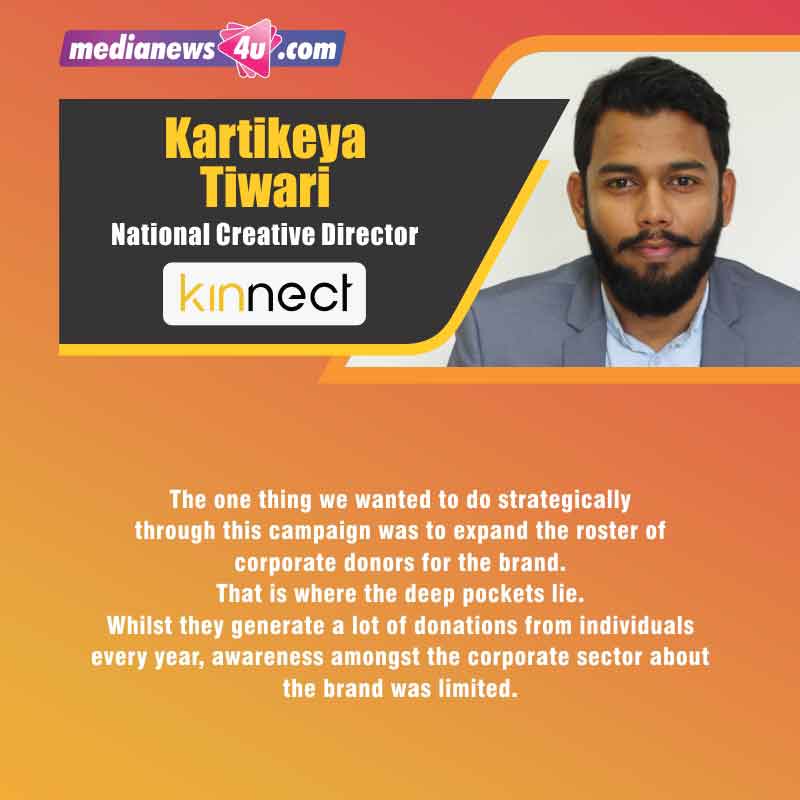 How was the experience working with Swati?

Kartikeya: It was way beyond my imagination; I have seen Swati’s body of work in my career and admire it. The purity of the work, intention, work ethics, and creative nuances took our work and my sensibilities to another level.

Swati: There is something called energy, the quality of our intent, and the belief in that organization was so much that everybody came with their best interest. What was good about working with this new team, which I am now addicted to, is the kind of openness. It wasn’t that I am older and I know what is right; this partnership allowed us to learn a lot.

Kartikeya: The fun of working with Swati is that she wants to know your inputs and readily accepts them given a logical reason. The energy just clicked between our teams and us.

Until yesterday, nobody has now become the face of the homeless and SOS; how did this transition happen?

Kartikeya: We did a nationwide hunt, we had visualized a persona and a sketch of the boy’s character, but to make it come alive, we needed that ‘street’ interaction. We contacted casting agencies and worked with organizations like Salaam Bombay to get a talented cast. Working on the ground level and not opting for kids from privileged backgrounds was the best part. We did about 200 auditions, and between me and my team, Amit Roy, and Swati, we shortlisted about 40 kids. Amit and I finalized on 4-5 kids we liked. We sent the tapes to Swati, and she didn’t like any of them. We then sent all the audition tapes to her. She went through all of them and selected one boy, Amit, and I had rejected him. I tried convincing her, but she was sure what she wanted. Amit explained that casting is something he and Swati have always disagreed on, but somehow Swati has an eye for the right person to be cast, so let’s go with her suggestion as later it always ends up being right. We went with her advice, and Swati had the last laugh. 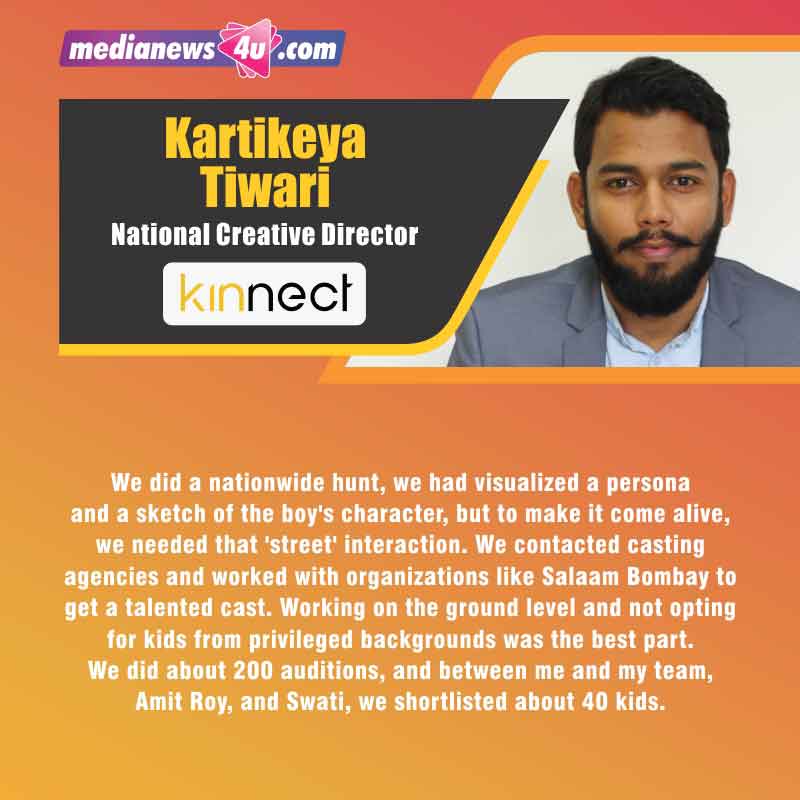 Swati: I was very clear when I chose the boy. It was clear that I had 30 secs to make India fall in love with this boy and now look all three of them, i.e. Amit, Kartikeya, and the boy, gelled beautifully. 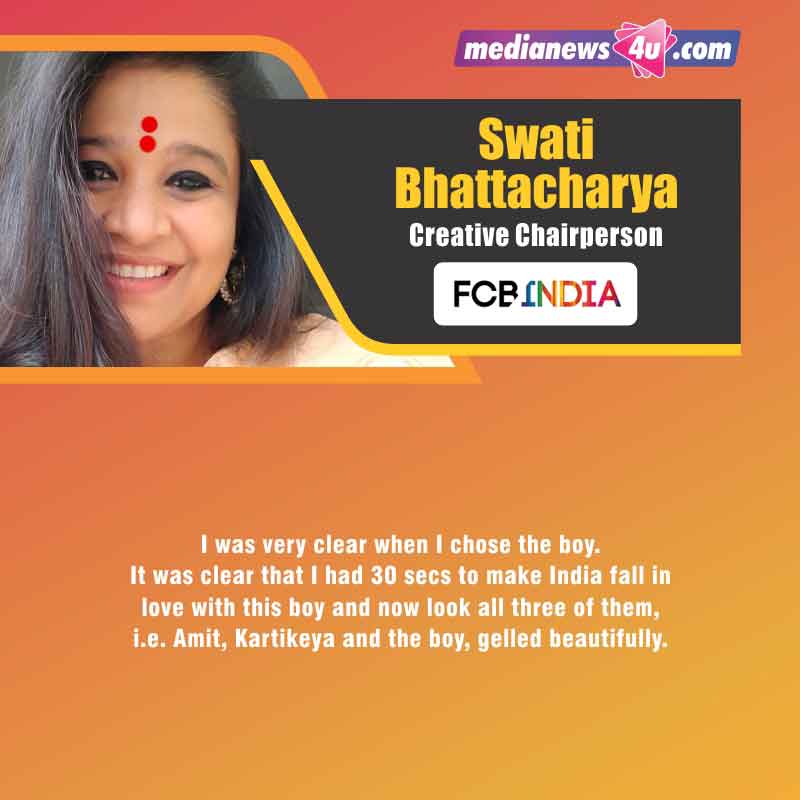 Partnership in fundraising for SOS

Swati: Yes. HUL, P&G are our clients. P&G reacted to Chatpat very positively. But we cannot push a client too much as the marketing teams work very differently. But in this case, once the films were getting ready, I personally started calling people for donations. I always feel that work only works if it solves a problem.

Kartikeya: Most of the clients on the Kinnect roster were not even aware that we did the films.

Swati: I was very strict about that, and it was such a beautiful piece of work. When the first film went viral, people followed and shared the work we were doing. Imagine for two months none of us put it on social media. I felt it would become all about the agency and how creative it is, and I didn’t want anything to be taken away from the power of Chatpat. We made a conscious effort not to like or share the viral posts.

Kartikeya: Some of our clients in meetings would show us Chatpat’s films and say, you guys need to do something like this, and then we had to sheepishly tell them that you know what, we did this film. Then when we asked them if they would want to be part of it, they were happily willing to. We have been working on these films for 5 months while the campaign is just 2 months long, and we never spoke about it in public. The power of this campaign is all about the content, the scale with zero media spend. We even did a rap keeping the pop culture in mind, and KR$NA a famous rapper from Delhi and Divine, commented on it, saying a great job Chatpat. Raaftar shared it on his story and even DMed the handle. We told him we’d love to meet him, and he responded by saying “soon”. A week later, he commented on one of the stories saying he wanted to connect with Chatpat, so we got in touch. Raftaar worked with him on a project as a VO artist and even made a sizable donation to SOS, saying the amount was Chatpat’s fees for VO. He made another donation to Chatpat and his gang for bicycles. The validation for us was a week on week, and it has given us so much joy.

Why the name Chatpat?

Kartikeya: We had named the kid Vishu, but a day before the shoot; I was on a call with Swati and said she was not happy with the name. She wanted a more colloquial name for the kid. She asked me what my mom called me at home, and I was hesitant at first, and then I gave in and said I am called Chatpat at home. She turned around and said that is what we will call him, and the rest is history. Chatpat has become a household name now. 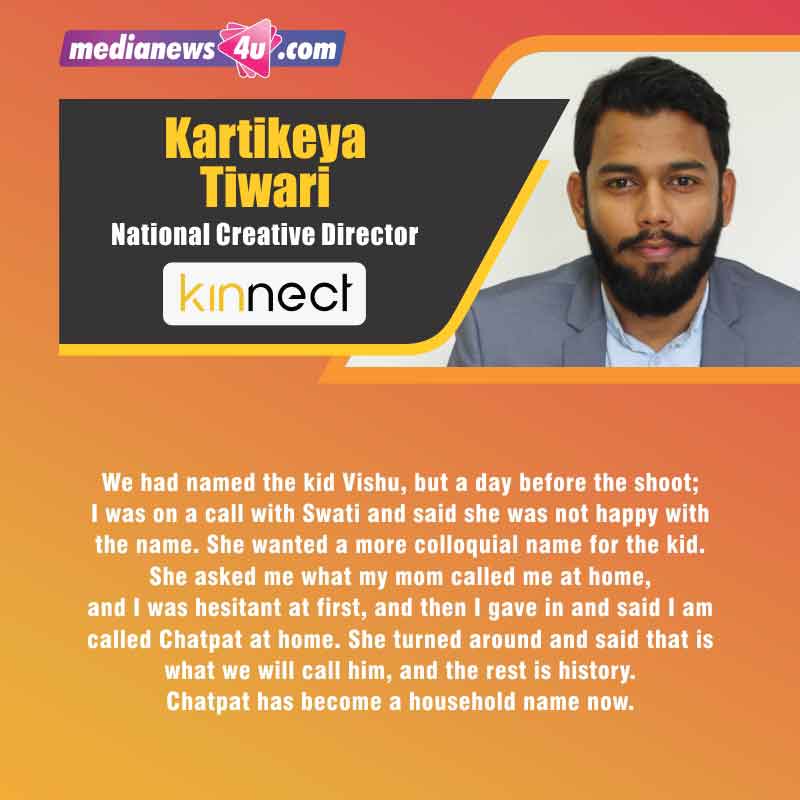 Does this kind of campaign work well on social media, or does it need to reach more people through traditional media?

Swati: I feel that in our online avatar or in that world, there is a kind of generosity that you don’t see if this was viewed only on TV. Many people would have missed it on TV. The films are so beautiful. The culture of generosity of Chatpat where he is also giving to organizations in exchange for a donation, that kind of giving I am in awe of. I feel that social media is at times bad but most times good. Also, the kinds of love we got were celebrities; ScoopWhoop put it on their story and shared about Chatpat. We didn’t pay them anything, yet they took it forward for the cause. We have not paid anybody, be it Miss Malini or India Today, but that generosity would not have been possible with buying spots in all the leading channels. 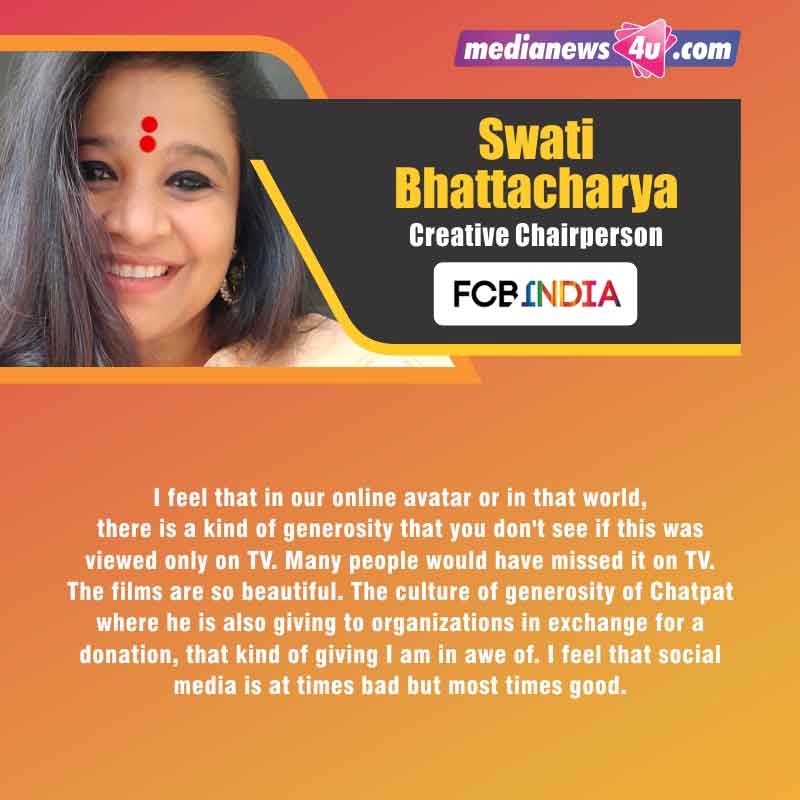 Kartikeya: The audiences wanted to take these films to TV. If I were to pick out their comments on social media, they would ask if these films should be running on TV. This campaign was totally on a different level. SOS has signed on Kinnect as the AOR and partners for a year. We are on this journey with SOS, it is not like this project. I think we are going to be partners for a long time with SOS; we are invested in so many ways. 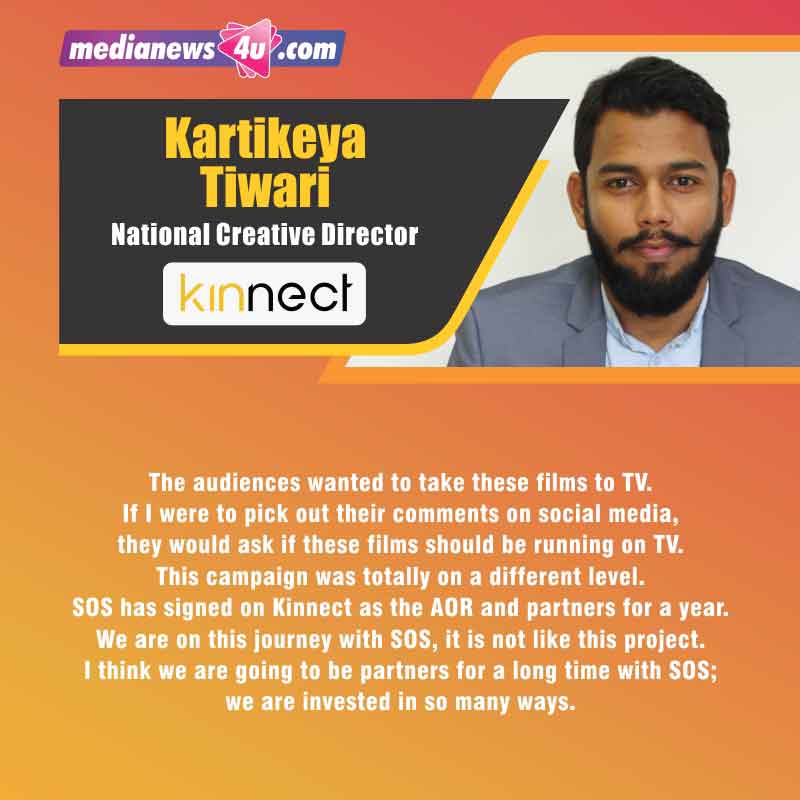 Mumbai: Zee Bollywood is all set to evoke nostalgia with the celebration of 35 years of Mr. India on 25th...