New Delhi: Indian DTH service has displayed significant growth in financial year 2019 with the addition of 4.91 million active subscribers during the period of 1st April 2018 to 31st March 2019.

According to the data released by Telecom Regulatory Authority of India’s (TRAI) Performance Indicator Report, there were 5 pay DTH service providers in India and they cumulatively garnered 72.44 million subscribers as on 31st March 2019 ascompared to 70.49 million at the end of the previous quarter. This is in addition to the subscribers of the free DTH services of Doordarshan.

The analysis of quarterly growth in the DTH sector in terms of the net active subscriber base revealed that during the Q1FY19 the figures increased from 67.53 million to 69.37 million, during Q2FY19 there was only a marginal increase of 0.08 million subs to reach 69.45 million subs due to confusion over implementation of NTO. The same picked up phase in Q3FY19 with addition of 1.04 million as the numbers incising from 69.45 million to 70.49 million. Subsequently, the growth peaked with addition to 1.95 million in Q4FY19 to reach 72.44 million as on 31st March 2019. 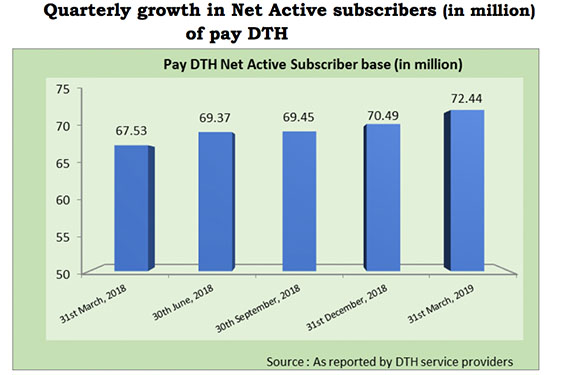 Market Share of DTH operators in terms of thepercentage of net active subscribers as on 31st March 2019 reveals that Dish TV was topping the charts with 40% market share due to the acquisition of Videcon d2h. Tata Sky stood at No. 2 with 25% market share closely followed Airtel Digital TV with 22% share. Sun Direct with strong presence in South Market stood at No. 4 with 12% while the ailing Reliance DTH was holding just 1% market share. 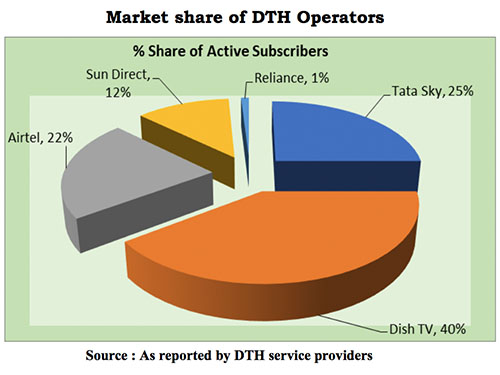 The trend observed in TRAI report shows that the New Tariff Order (NTO) has favoured Pay DTH operators significantly to amplify the addition of new subscribers owing to the confusion and delay in rollout on the part of MSOs and Cable Operators.

New Delhi: Insecticides India, a crop protection and Nutrition company, has roped in Bollywood actor Ajay Devgn as their brand...