by Editorial
in Featured, Marketing
Reading Time: 3 mins read
A A

Mumbai: In a year where the tournament had been in doubt, and most marketing projections for the IPL had been thrown into disarray, it has been a remarkable turnaround as the 13th edition continues to blaze and entertain in the UAE. Aside of roping in a new title sponsor for the season on virtually zero notice, the two biggest sponsor moves during the build up to the tournament was the addition of Unacademy and CRED as official partners of the league by the BCCI. Both the CRED and UnAcademy deals were orchestrated by ITW Consulting a sports, media and entertainment consulting firm with a track record of working with several key brands in cricket. 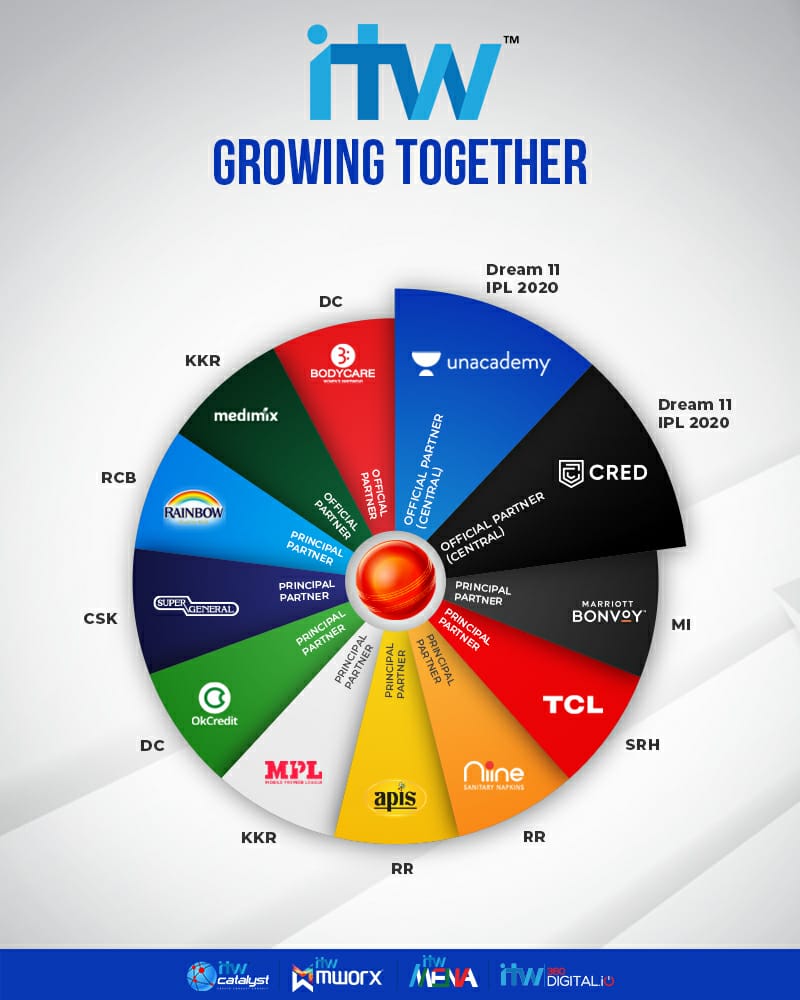 “We are very proud of ITW’s record of introducing brands into cricket, and we are delighted to have closed the deals for two official partners with the IPL, defying the apprehension that had set in after the initial weeks of the lockdown and the pandemic. Everyone had predicted that sponsorship volumes will fall, but contrary to those expectations, it’s actually gone up. If you offer great value, there will always be takers. We focused on the medium term and creating the correct fitment for the brands. “The IPL still remains a sought-after marketing platform but you need to tailor the solution well. We have seen that in our own experience in working with more than 16 partners across franchises for this season as well as the media buying space where we sold out the inventory,” says Bhairav Shanth, the co-founder and Managing Director of ITW

CRED (which allows users to pay credit card bills through its mobile applications) is making its first major foray into cricket sponsorship, but it’s not the only brand stepping into the high-octane world of the IPL and its franchises for the first time. So are Unacademy and Marriott International.

Explaining their rationale behind associating with the league Sonal Mishra, the Director, Marketing at Unacademy, said “Unacademy has been reinventing education and learning in India through disruptive and innovative offerings, and we were keen on associating with IPL which effectively reinvented how the game of cricket is marketed and consumed. Our growth and impact trajectory perfectly aligns with the league and we want to ensure our message of democratising education reaches all learners in India through (this) association”.

Marriott Bonvoy signed a three-season deal as Loyalty Partner for the defending champions Mumbai Indians in early 2020. The hospitality brand will be leveraging the partnership to provide its members exclusive experiences with the team.

The Marriot International – Mumbai Indians deal was the marquee one in an ever-expanding portfolio of ITW Catalyst, a division of ITW. Set up less than a year ago, the agency has been able to earn the trust of the biggest brands and using a consulting-based sales approach has already clocked deals with seven out of the eight IPL franchises. Paroksh Chawla, the CEO of ITW Catalyst explains, “The paradigms of Return on Investment or Return on Opportunity based investments in sports properties is becoming a relic of the past in this fast-changing environment. Our cornerstone is a consulting-based approach in figuring out the right fit and solution for a brand through evaluating their Return On Objective(s). Every single brand we have worked with in this short period of time has been given a customised sponsorship solution based on their objective.”

ITW was also involved in facilitating the deal that saw Mobile Premier League (MPL) as jersey sponsors for both the Kolkata Knight Riders in the IPL and the Trinbago Knight Riders in the Caribbean Premier League (CPL). Abhishek Madhavan, SVP, Growth and Marketing, MPL said: “We worked with ITW even during the England-Ireland ODI series, where we sponsored the Irish team. It was a good experience working with them for our IPL sponsorship too, and we look forward to the upcoming Cricket season.”