Bangalore: 93.5 RED FM Bangalore recently received a national media award from the President of India Shri Ram Nath Kovind for its voting awareness campaign ‘Ab Watan Dabayega Button’. The campaign was awarded under Best Electoral Practices Award 2019 for carrying out an influential and informative drive. RJ Disha Oberoi, who led the initiative in Bengaluru received the award. Focused to create awareness around voting, this activity helped create a milestone in educating and resolving queries of youngsters who feel voting doesn’t make a difference.

Speaking about this campaign, B Surendar, COO &Director, REDFM said“It is not every day that a brand receives a national media award from the Hon. President of India for an initiative which impacted the society at large. We at the RED FM network feel extremely proud that we have managed to do exactly that with our initiative ‘Ab Watan Dabayega Button’ meant to create voter awareness at the time of elections. Our RED FM team at Bangalore led by RJ Disha Oberoi went on an overdrive not just on Radio but also on the ground and on our digital platforms organizing free bus rides for voters, corporate registration drives, mock booths, VVPAT demos, university seminars and live shows enabling people interaction with EC officials. Brand RED FM is meant to be a platform for people’s expression and we love this recognition at the highest level. We would like to thank the Election Commission of India for their cooperation in executing our thoughts that resulted in a huge buzz countrywide” 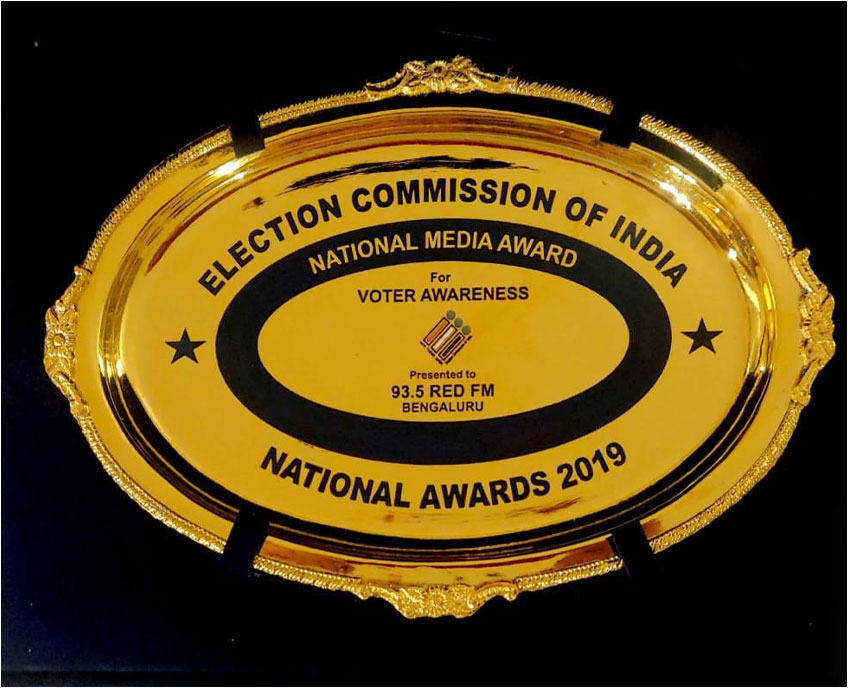 RED FM wheeled this campaign through its team of RJs who were appointed as ‘Youth Ambassadors’. These ambassadors reached out to the residents in nearby towns and villages. Besides national, the campaign echoed a great response in the Startup Capital. The campaign in Bangalore was spearheaded by RJ Disha who engaged with listeners via radio shows, seminars, and mock booths. The campaign overall ran seamlessly with strong support from the RED FM Bengaluru network.  With the relentless support from the audience, the country echoed saying ‘Ab Watan Dabayega Button’.

On receiving the award, RJ Disha expressed her gratitude saying, “It’s an absolute honor to be recognized by the Election Commission of India for a campaign that worked in conjunction with the Chief Electoral Officer Karnataka, technology companies, colleges, the local civic body – BBMP, private cab and bus service organizations for first-time voters and traveling voters alike. It’s not just a recognition not just for RED FM Bengaluru, but for the city and its people”

This thought led campaign stood unique with significant support from the Election Commission of India that made roads into the mass, with the radio playing the vital responsibility of creating a platform for socio-political and cultural issues. Reaffirming its commitment towards a healthy society, RED FM generated maximum buzz around voting awareness.