Mumbai: Star Bharat is thrilled to announce its second mammoth mythological offering ‘Jag Jaanani Maa Vaishnodevi – Kahani Matarani Ki’. The show, which is produced by Rashmi Sharma Telefilms, narrates the untold story of Maa Vaishno Devi, from the onset of her journey on earth as a child to her becoming Maa Vaishno Devi, our universal mother as she is now acknowledged. The show is scheduled to premiere on September 30th and will air daily – Monday to Saturday at 9: 30pm.

Jag Jaanani Maa Vaishnodevi – Kahani Matarani Ki – is a story set in mythology. It commences in the background of the end of Devasur Sangram – the biggest war and how the Asurs (demons) were seeking a safe haven on earth.  A troubled Bhudevi seeks help from Lord Vishnu. When Mahadev gets to know of her predicament he says the only solution is the destruction of prithvi. At this point, Maa Lakshmi, Maa Kali and Maa Saraswati come forward to stop Mahadev and propose to combine their powers – – a new force who would strive to save humanity in her role as an intermediary and help the crucial circumstance that they were faced with. Thus, was born Vaishnavi (the Shakti of Vishnu), the daughter of King Ratnakar Sagar.

The riveting mythological drama series very powerfully outlines how Maa Vaishno Devi changes people’s lives even in her childhood by addressing grave problems of pain, hunger and poverty that touches her soul.  And as she grows up, how she fights every battle she faces in order to achieve her higher purpose and how she strives to end Paap (the evil in the world) and not the Paapi (the sinner). 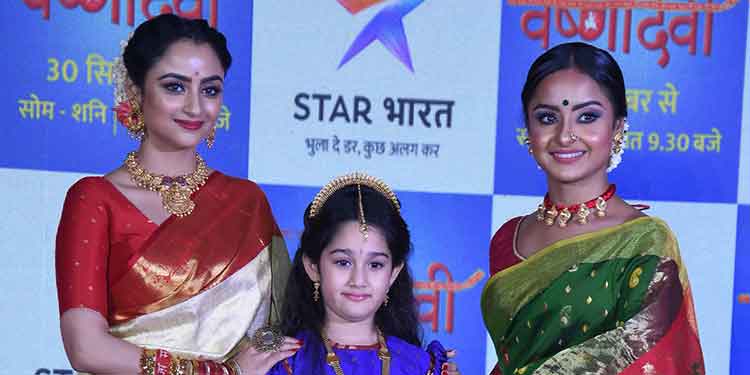 Commenting on the launch of the show, a Star Bharat Spokesperson said, “Star Bharat since inception, has brought stories that are deeply rooted in India, its culture and its people. Our content philosophy of “Bhula De Darr, Kuch Alagh Kar” is about celebrating fearless characters who fight for collective good. Jag Jaanani Maa Vashinodevi, our latest offering is the story of Mata Rani, who is revered across India as a “mother”, who protects and forgives all of her children. The show is set to be one of our biggest launches this year and we are happy to partner with Rashmi Sharma Telefilms once again. The sheer production scale of ‘Jag Jaanani Maa Vaishnodevi’ is noteworthy and more importantly customized to cater to the preferences of our audiences across our target markets.”

The producer Rashmi Sharma expresses her enthusiasm by saying, “Jag Jaanani Maa Vaishnodevi will have an answer to the unanswered questions pertaining to the birth and journey of Maa Vaishnodevi on earth and it gives me immense satisfaction to present this show to viewers. It is the first mythological from Rashmi Sharma Telefilms and we are extremely excited and proud of this. We have always believed in creating content that we strongly believe in and my team and I appreciate Star Bharat’s undaunted support towards the launch of another mythological classic.”

With Jag Jaanani Maa Vaishnodevi – Kahani Matarani Ki, audiences will get a chance to witness the immortal saga of the Goddess of Kalyug – Maa Vaishno Devi and her amazing story as it unravels on the small screen.

Witness the journey of Maa Vaishnodevi every Monday to Saturday at 9:30pm from 30th September only on Star Bharat