Mitu, who started her Television career 20-odd years ago as a trainee journalist with Rajat Sharma’s Aap Ki Adalat has worked as Creative Producer on some of the iconic shows on Indian television.

Mitu is known for her sensitive storytelling and poignant & realistic portrayal of the modern Indian woman, she has mesmerized Indian television viewers with her concepts that made some popular Indian TV shows a household name. She has continued to follow the sensibilities of the modern Indian women & their undying desire to follow their hearts and chart their own path in her recent shows – Bhaage Re Maan(Zee-Zindagi), and Pehel- ekNayiSubah (DD National). Both the shows were written and produced by her.

Recently during the crisis in April 2020, Mitu set up her own youtube channel POSITIVE THINKERZ OFFICIAL that has been running successfully.

In an exclusive chat with MediaNews4U Mitu – Producer-Writer, Positive Thinkerz spoke to us on her journey in the field of television, content then and now, and her journey as an independent producer…

You have helmed some very popular shows for Balaji, How was your experience?

It was a great learning experience with Ekta being the best Guru anyone can ask for. Be it scripts, or treatment of shows or knowing the pulse of her TG, is an experience everyone should have. Her other quality is making the impossible possible. However fine a deadline, she never missed a commitment and this was another learning I got. Our tagline “Achieve the Impossible” comes from that life lesson. Under her vision, we have turned around many shows. As early as Kahaani Ghar …to as recent as Pavitra Rishta. 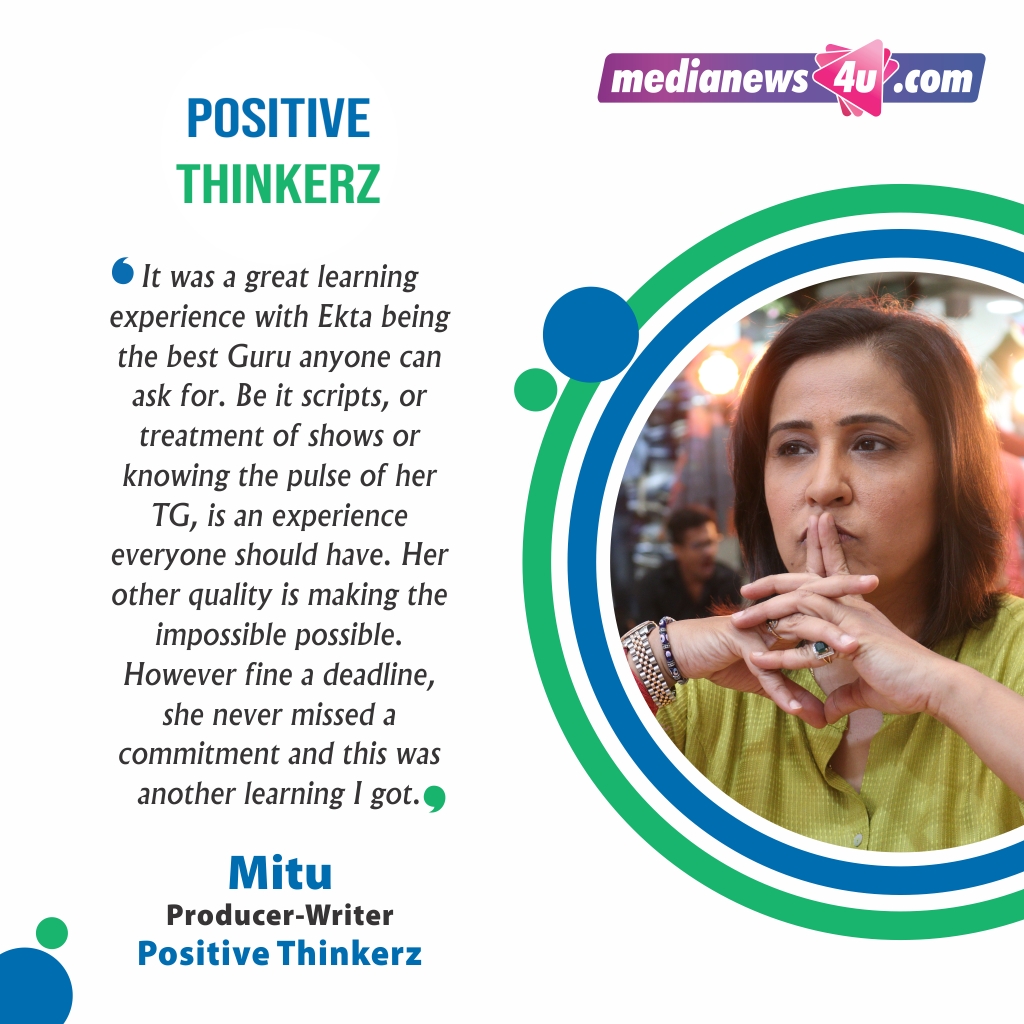 Passion for perfection is yet another learning.

Recently your company ‘Positive Thinkerz’ created films for two shows ‘Bade Ache LagteHain’ and PavitraRishta’ to commemorate their anniversaries, what made you want to do something like this?

Bade and Pavitra were two shows very close to my heart. We had a whole team who was more like family. With both these shows completing iconic years, I felt it was like giving back to the shows the love that they gave us. I called up the cast and crew and all of them were more than happy to do this. 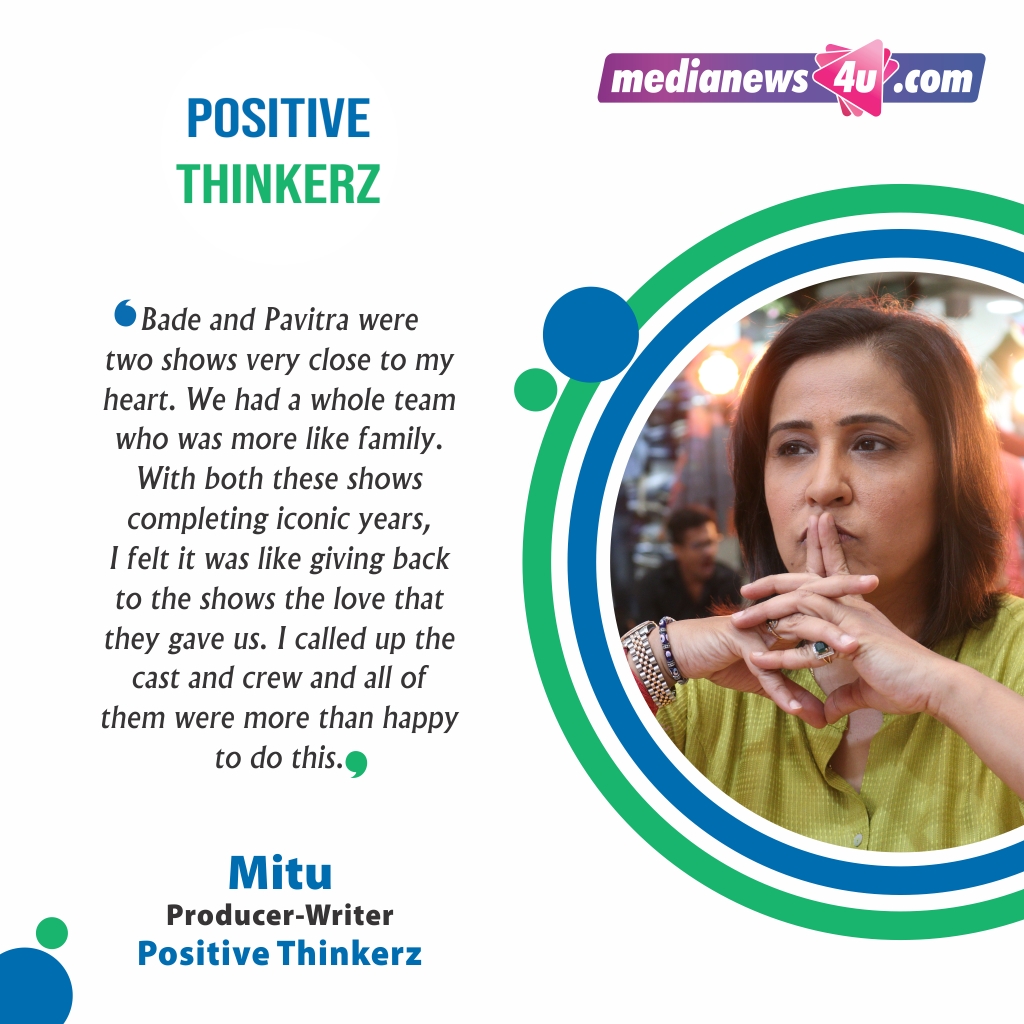 I also felt that many people knew the shows but not what and how they were made… so with each show, we tell a different story. With Bade… it was the story of how each person landed it. It was a story of fate and destiny that we showcased with the cast talking about it. SakshiTanwar was a big reason it happened. She was happy to be part of it. She gave me lots of old photos and also was kind enough to sing the title track and play its instrumental version.

For Pavitra…, Ankita likewise was forthcoming in being part of the episode. She strung it all together and everyone came together to talk about how Pavitra… was a family saga and the Eternal Bond they shared.

These are memories and people we have made for life. And in both the films, it shows. We got a lot of love.Our PavitraRishta birthday featurette has done over 100k hits in about a month. It was overwhelming and humbling.

You have now ventured out on your own as a Producer/Director, what are the challenges you are envisaging? Also, on a Youtube channel, what are the kinds of shows you will be producing & directing?

The challenge is to make content that stands out, be relevant to today’s time, think afresh, and reinvent to tell a new story. Of course for a new producer/director to be taken for her/his worth is an uphill task especially now with so many players. But all I need is one good show and then that show will speak for my talent. 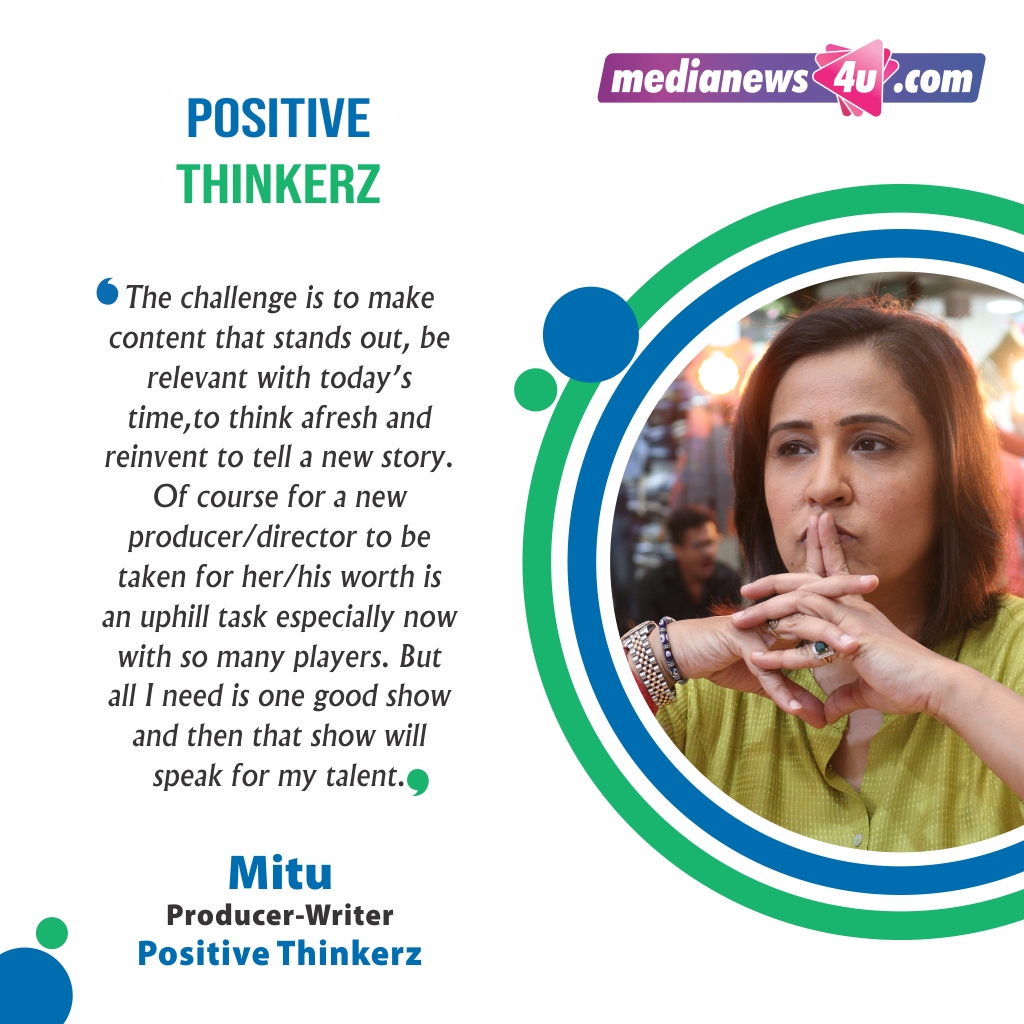 As a YouTube channel, we are experimenting with different kinds of content. While on one side, we do plan to have issue based celebrity anchored vines, we will also have a frothy slice of life sketches that bring out “today” in a tongue-n- cheek manner… we plan to throw up relevant issues like parent-kid relations, relationships in a new dimension. We also plan to keep making our docu-series of shows as and when the need for them arises. The channel will be a mix of different flavors.

OTT is seeing a huge surge, you have done a few shows for Hotstar, and going forward will you be doing shows/films for other platforms?

I am always very excited to do new stuff. Yes, I will be happy to make shows for other platforms. I would love to get a platform where I can be heard. I recently worked with Hotstar. AvaniSaxena and Pooja Varma were so collaborative and encouraging that it really was great to be part of their team. I have a lot of stories to tell and am sure they would want to hear them too.

Content from then to now has seen a vast change, are you seeing GEC’s now thinking out of the box and experimenting with newer ideas?

With OTTs experimenting with content, GECs should also follow suit. While staying with the basics of what works, in that periphery, there is a need to push the envelope. There is a new Genre called TV PLUS that has come into play, which is challenging to tackle. Also, the role of the heroine is changing, which means the lens of seeing shows is changing. Originally heroines were the problem solvers today they are also the problem: the overweight heroine, the stammering heroine, the crook heroine and to top it all, my personal favorite: the Robot heroine. The change is not glaring, but it is happening and it’s good to know. 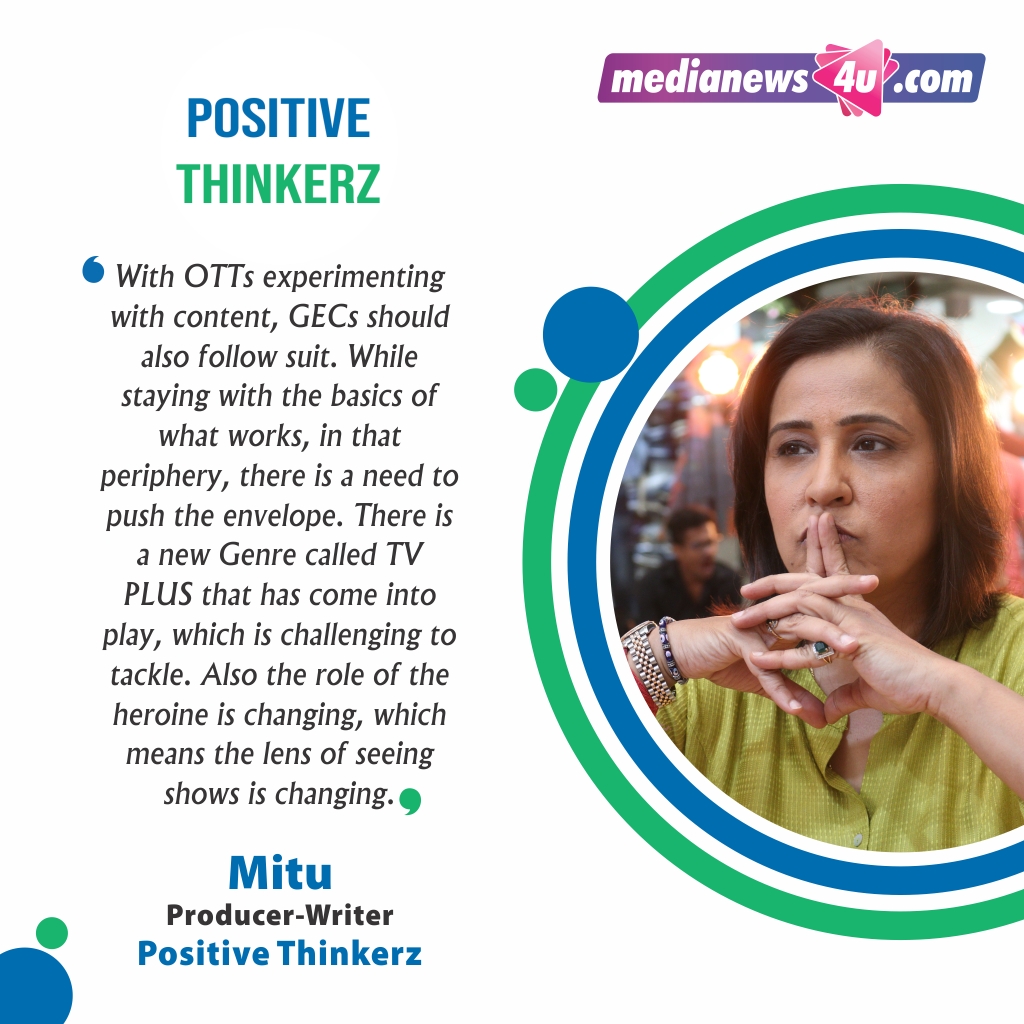 The kind of content that moves me as a maker.The topics that need to be addressed and things that need to be spoken about. It can range from gender bias to sexual harassment at the workplace to menopause to the most taboo subject ever: Child Abuse. 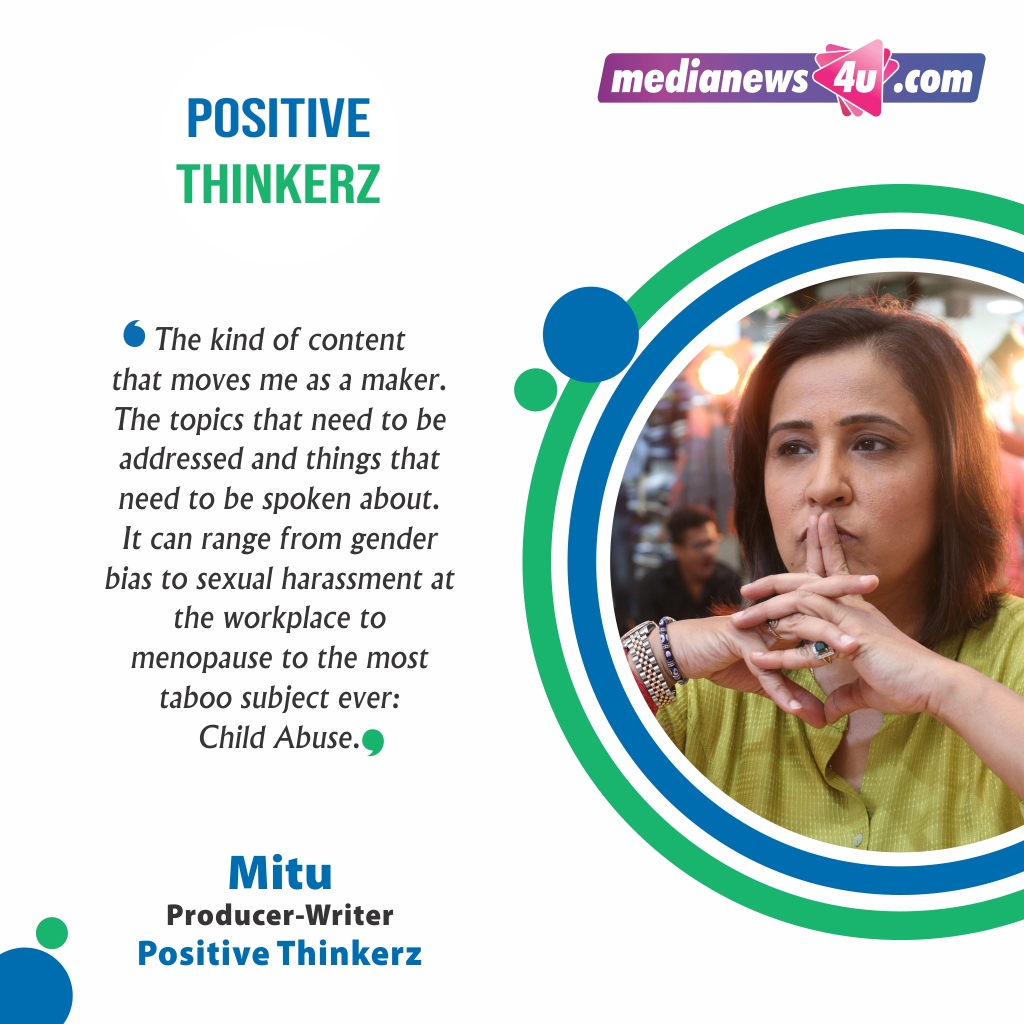 I need my stories to drive me to tell them. These are some serious topics. But they are other topics in a lighter vein like Commitment Issues, Technology, changing times that should also be spoken about.

You have also ventured into the Events business, how did that happen?

Actually, it happened with me being a Creative Producer. When my daughter was about 2, I started going with her to the mandatory events of kids. Seeing what was being offered, creatively I felt we could do a better job of that. Production-wise it excited me to venture into an area we had never gone into. I joined hands with my friend and now business partner Arshima and we launched PEGASUSFETE. She is very good creative and I handle the production aspect. We are in synergy and constantly we have been bettering ourselves. Learning from the last and moving to the next.

PegasusFete has a meaning.  Legend has it that Pegasus was the vehicle of Zeus, the Greek God of Gods, the forerunner to the Unicorn. Fete is a Carnival. So PegasusFete means the most imaginative carnival. That is our promise to all our clients. And, I might say so to myself, we have lived up to that promise. In just over 2 years, we have a clientele we are proud of. Celebrities, Big clubs like the Goregaon Sports Club, Celebration Sports Club are just a few of our clients. We are also set to launch a Big Kids Flea once the Covid Monster subsides. 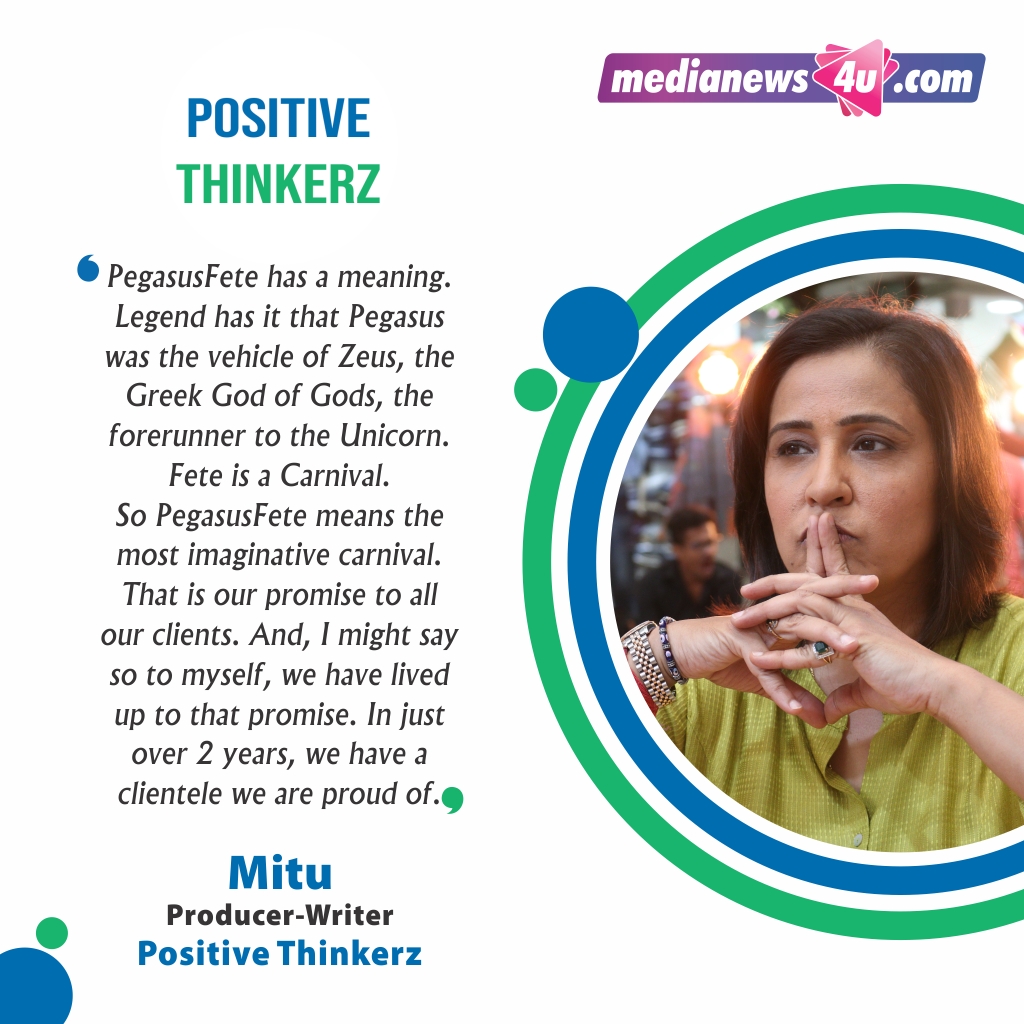 Where do you see yourself and Positive Thinkerz in the next 3 years?

Making good meaningful content that finds resonance with my TG. Our channel will be an established entity by then. I see Positive Thinkerz as an established successful Entertainment Hub. Be it Events or Film/Web/OTT. I also see Positive Thinkerz as a platform where we will nurture new talent and give them a voice to be heard. I know we will get there because we, as a company, operate on two principals. INTEGRITY and PASSION to our work. The climb might be slow, but it will be steady for sure. Our Byline/Mantra is: ACHIEVE THE IMPOSSIBLE. 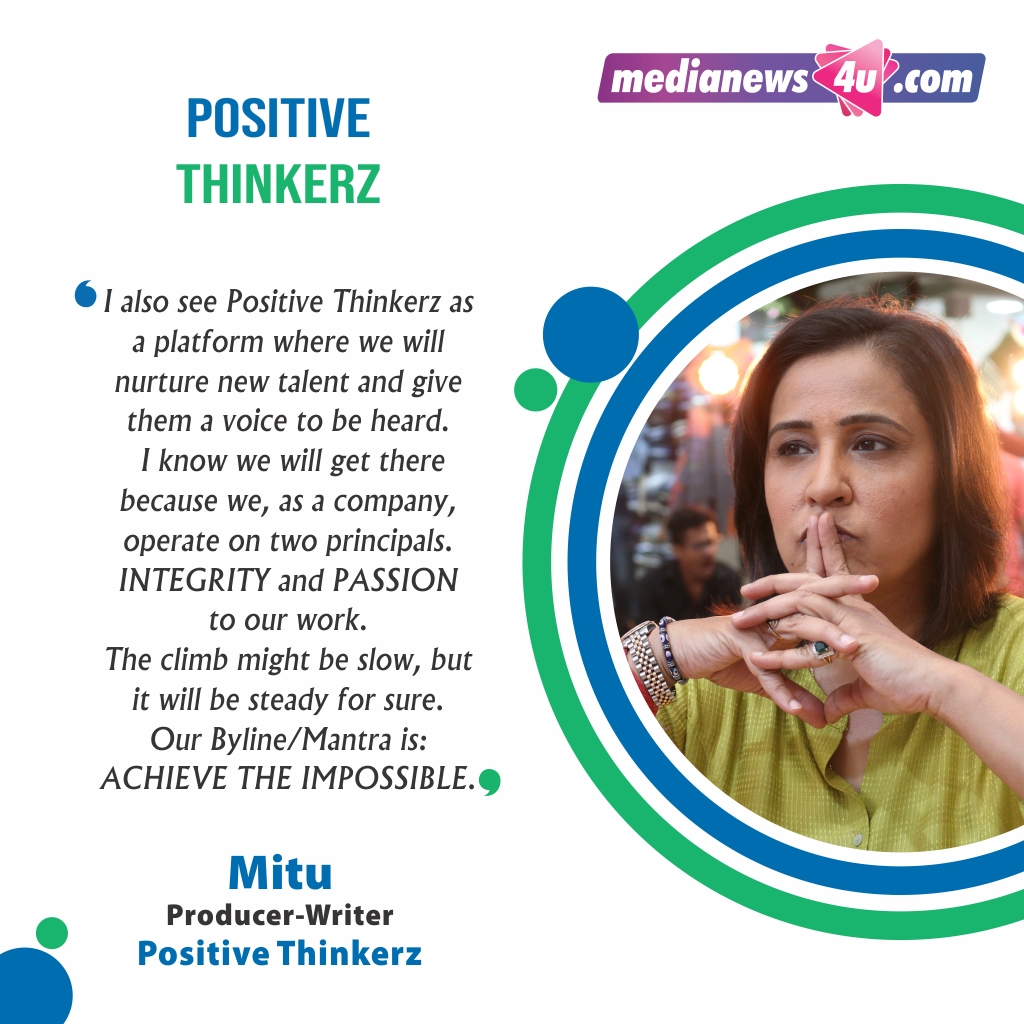 Star India announced top-level leadership rejig and has given additional responsibilities to its existing regional Channels leadership team. According to...