The charm of reading a newspaper is an intimate and uninterrupted immersion into news that is both relaxing and intense depending on the pace of its reader: Sanjeev Bhargava, Director, Brand – TOI

Over the 179 years of its illustrious history, the Times of India has established itself as India’s most-read English daily, upholding the trademark values that have helped weave newspapers into the cultural fabric of the country.

The pandemic has brought in massive changes in the way we live. Social distancing, work-from-home, online schooling, virtual events etc. are all visible changes that are affecting our everyday lives. The world is grappling with uncertainty, and it is more important now than ever to be equipped with accurate information to fight off the rumors and fear. Newspapers have always enabled trustworthy and insightful journalism that prints the truth without fear or favor.  As we yearn for normalcy in the new- normal, The Times of India, India’s largest English newspaper, launched a beautiful ode to #NewspaperMornings that highlights the power of the printed word and its intimate relationship with its readers in shaping their mornings.

The poetry #NewspaperMornings is penned by and narrated by poet, and lyricist Gulzar Saa’b and weaves in the close relationship a reader shares with his/her newspapers. The core messaging of the campaign ‘some relationships never change’ builds on the legacy of brand TOI, its commitment to bring fact-checked news to the readers and authenticity of the role of newspaper in life of its readers

Speaking about the campaign Sanjeev Bhargava, Director, Brand TOI said, “Across the world, newspapers are the most trusted source of news, and our readers already know that. Reading a newspaper is not merely flipping through pages. We all have our unique way of reading our newspapers – some sit on a table, some lounge on floor, some start from front page, and some go reverse and so on. The charm of reading a newspaper is an intimate and uninterrupted immersion into news that is both relaxing and intense depending on the pace of its reader. The poetry narrates this experience from the eyes of the reader. During uncertainty, access to accurate information is critical. And, we stay committed to our readers to bring them unbiased and authentic news to ensure our relationship with our readers strengthen further.”

Newspapers have been in circulation for the past two months now, barring a few containment zones, what made you want to do this campaign now?

The festival season is approaching and the market has started opening up now. The sentiment is also gently creeping up. All these developments make it the right time to remind people about the charm and pleasure of newspaper mornings.

Wunderman and TOI have created path breaking campaigns, what was your pitch to the agency?

“Romance the newspaper” was the simple brief. Surprisingly in the newspaper industry, we have done many issue based campaigns which work very well to reinforce the role the newspaper plays in not only chronicling change but also in affecting constructive change. However, we have never really put the spot light on ourselves and our readers and celebrated the wonderful relationship we share. Now, when the readers are despondent and worried, we feel the joy of reading the paper must be underlined for them. 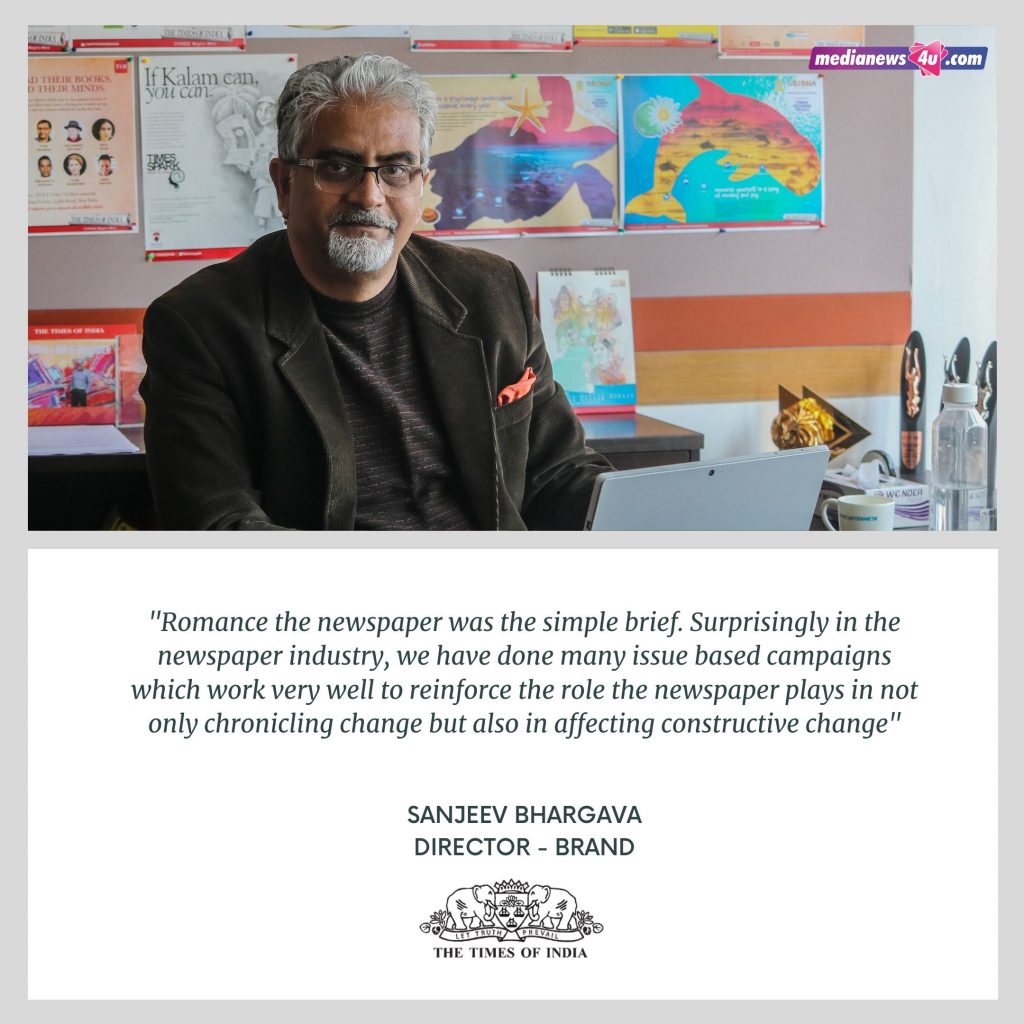 The campaign has hit a bullseye with 18mn views in just a week, what do you attribute this to?

Insightful content normally gets appreciated very quickly. And this film, I am happy to say reveals a lot of unstated truths about the readers to themselves. And this is true both in the poetry that Gulzar Sahab has penned and the visual narration that we have crafted around it. Therefore I am not really surprised at the enormous response we are getting to the film.

Newspapers had gone off the radar during the lockdown, be it regional or English. How has it affected the print industry?

Clearly the circulation suffered during the first lockdown as the freeze was almost total. But with every successive week we have succeeded in building back our circulation in households and we are confident that we will reach previous levels very soon.

Many are writing epitaphs for the print media, your observations and thoughts?

Epitaph writers have been prolific down the ages. The first one was written at the advent of radio, the second with TV and the third with digital. Print has always held its own unique position in the household. As a source of unbiased, curated and validated source of news. As a good habit to be passed on to children. Because it is this habit that develops an unbiased and all-round awareness of the world around us. And this awareness is critical for children to grow up into responsible citizens rather than raucous individuals trapped in their own echo chambers that the digital world so conveniently and incessantly provides. 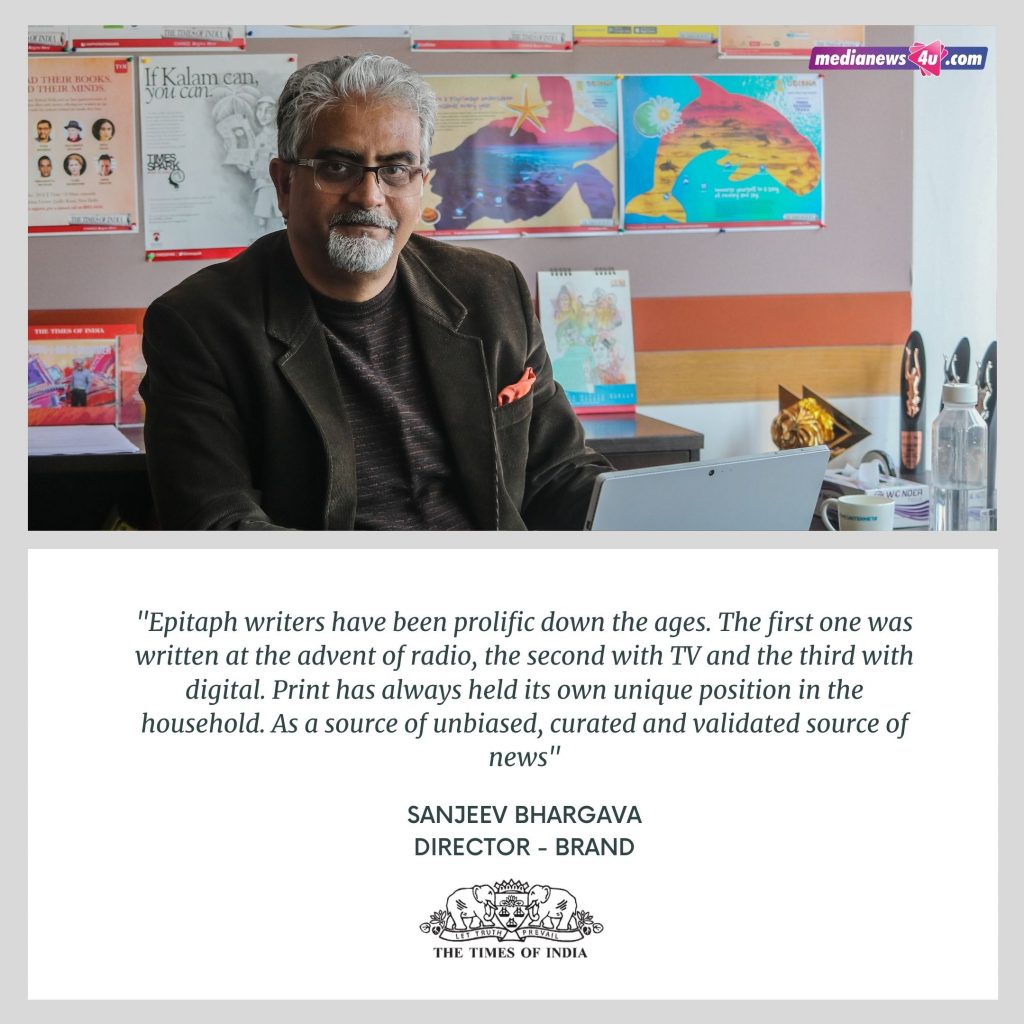 Now with the newspaper in circulation, IPL and festive season approaching, how has been the advertiser’s response?

The advertiser confidence is climbing rapidly as the festive and cricket season approaches. This is a new age. New initiatives are being launched by almost every category in the market to cope with the new normal. These announcements need a platform where they get instant reach and impact. The newspaper is uniquely positioned to do that. And we are seeing that happen as we approach the main seasons.

When we asked Senthil on what was his thoughts when he worked on this campaign and why he thought that Gulzar Saa’b would be the best fit to pen this lyrics.

Your thoughts when you visualized this campaign?

What are mornings without The Times of India? There is a whole lot missing from a day in the Life of India when you do not receive the Times. It is like your favourite morning person is missing from your life. The wind has taken away your wings to the world that you viewed with a flutter of your wings every morning.  The thoughts revolved around the absence of the newspaper and the elevating presence of the newspaper. It had to bring alive the missing morning habit for many Indians and deliver the truth that Some Relations don’t change and especially the one between the newspaper and the reader. 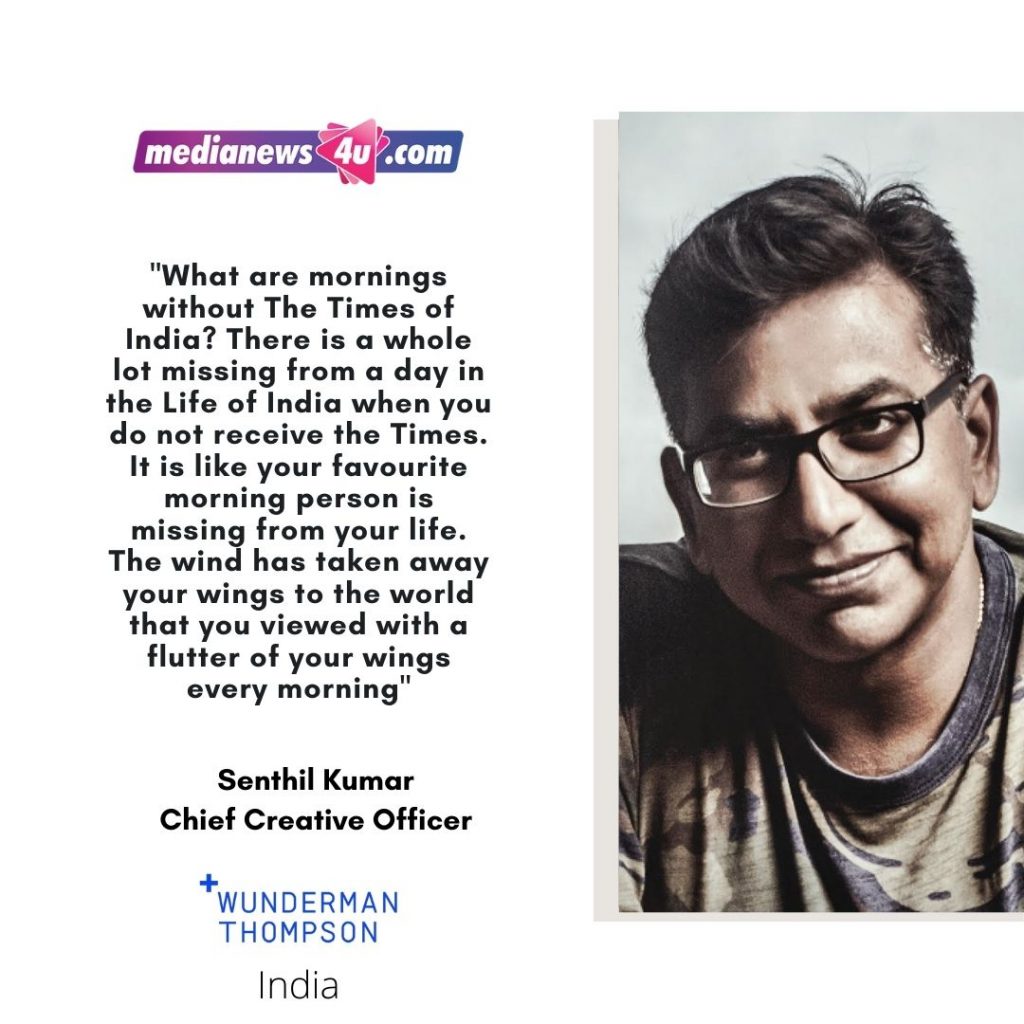 How did you plan the whole shoot during this lockdown?

The team went about the shoot after recording the words of Gulzar in his own voice and then shooting to interpret the various words and lines of poetry through the morning relationships with the newspaper across different homes and through the lives of different readers. The camera crew travelled to different locations following all safety guides of efficient production during covid times and some readers shot selfies of themselves with their own cameras to add the touch of realism to the real life morning stories across the country. It was not a complicated act to follow. In fact it was a breeze because the cast only had to bring alive a single line or word in the poetry with their improvisation or interpretation.

We briefed the legendary poet Gulzar who had already written a wonderful poem on the written word titled ‘Kitabein’ and he was excited to dwell on the power of print that awoke the nation every day in the form of the morning newspaper. Beside that truth that he was a morning person who was missing the newspaper like many of us. After he read out his first few lines, we all agreed that it has to be the baritone voice of Gulzar in our audio. No one else could do justice to the emotional elevation in his words.