India TV has come up with one of its kind and very bold sales initiatives for its election programming ‘AbkiBaarKiskiSarkar’ where sponsorship will be sold by invitation only. This assembly election for Uttar Pradesh, Punjab, Uttarakhand are a much sought-after national event after the West Bengal Assembly Elections. The channel has started many programming under the umbrella branding of AbkiBaarKiskiSarkar. We believe, today the industry needs more bold steps and confidence to approach the market.

On this strategy of India TV MediaNews4U spoke to Sudipto Chowdhuri – CRO – India TV, on this move by the channel, and much more…

The elections are 7 months away, why this push now?

Fundamentally we are very clear on what we are doing, as an organization. India TV has always been a stable, consistent channel in the media plan of many advertisers, so this is not an aggressive push. We are in the core plan of all advertisers and major brands, India TV and Aajtak are the two driver channels for any new launch. The question here is that we are not going and selling, our strategy is to invite the advertisers. Even if we are not selling planners will allocate funds for India TV even if we don’t send them a proposal. We are informing them well in advance, saying we are not going to sell or go to any brand but we are inviting 30-35 advertisers to come on this show, ‘ AbkibaarKiskiSarkar’.

The invited advertisers are based on relevance. In terms of importance after the Loksabha elections the UP elections are the biggest elections, so planners are already planning and it is not right for us to tell them at the last moment as we have changed our strategy. 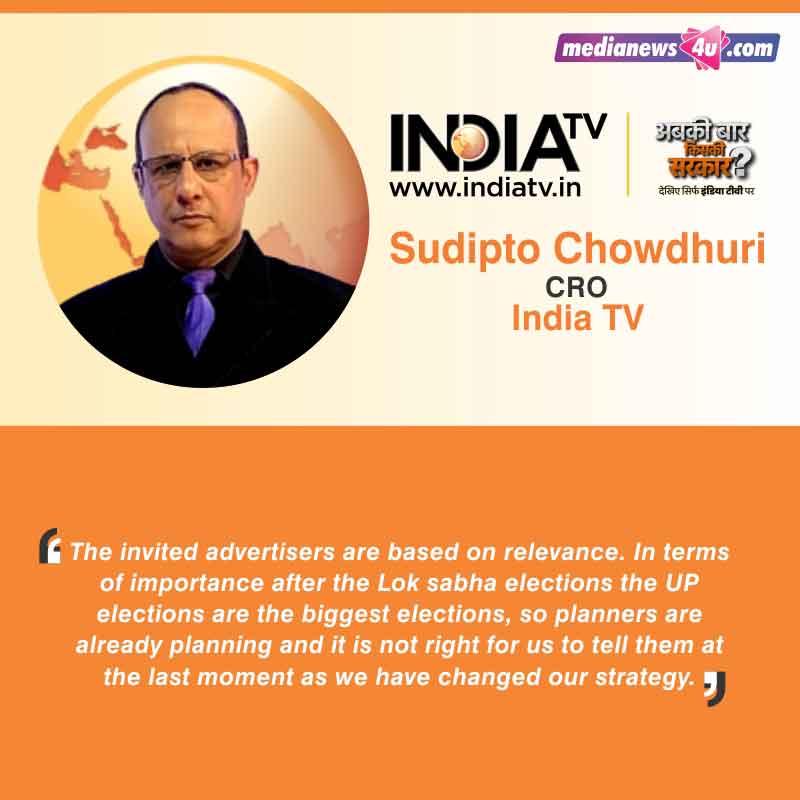 If you see any Hindi News Channel today, the promos of special programming for UP elections have started, and one or two sponsors have also come on board with an integrated logo unit. It is picking up and post Diwali it will peak. We are not too much ahead of time, we are just on time and we are going in a very systematic way as we respect our clients, their money, their time and values and we don’t want our innovation and strategies affect their planning.

What will be the format of the show?

‘Abki Baar Kiski Sarkar’ is the name of the overall property for the elections and the umbrella branding for the election programming. We will be doing 2 programs on UP elections, one is at 12.30 in the afternoon and the other is at 7 pm. We will be adding new programs as we move ahead and in a week or two, we will be going on the ground and meeting people across UP and do ground reporting from various districts across UP. Then there will be a ground event where we will invite the CM, the main opposition leaders, and contestants, to talk about the agenda, their strategies for the elections, and much more. As a channel with balanced views and not opinionated we will give a chance to everyone to put across their views to our viewers. There will be many programs and by the time it is January – February we would have aired 6-8 special shows. The programming will peak just as we enter the election phase.

We are given to understand that there would be a limited number of advertisers based on an invitation, can you elaborate on this?

We are very clear on our strategy though it involves a certain amount of risk as the advertisers to who we have not extended an invitation may feel upset. We have done an in-depth study. Our research and development team, the strategy teams are very strong and along with these teams we have done an in depth study on which are the brands that have advertised in the last 3 UP elections, across the country, and across news channels and their reasons to advertise during the elections. For example, was it a momentary decision, i.e. an IPO was coming so this was an opportunity to reach out to the people, There are 32 brands that have been advertising across different elections and are very relevant from their consumer’s point of view. 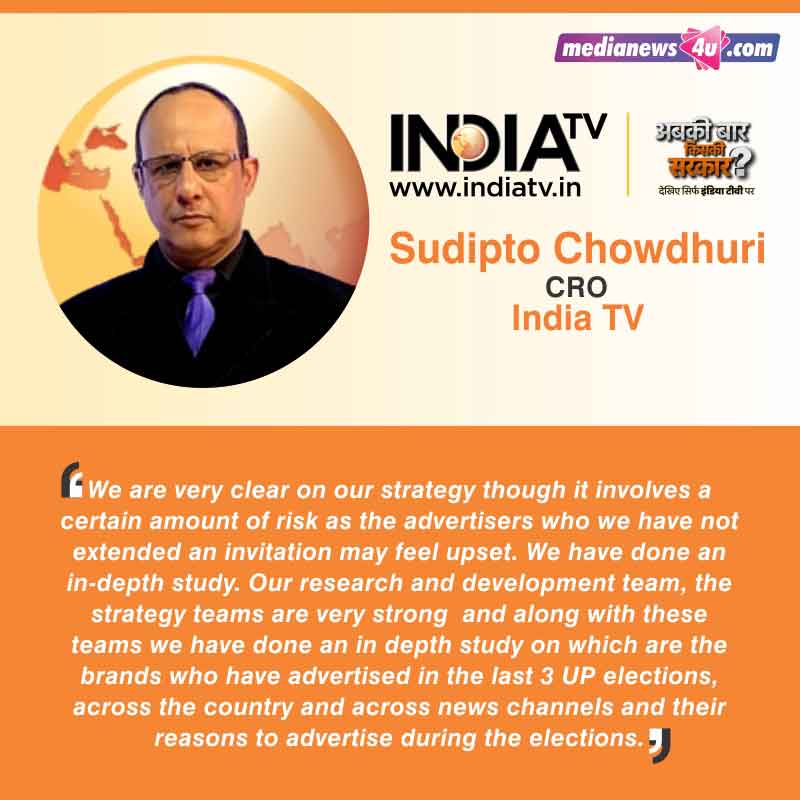 There are lot of brands who have Priority 1 & 2 markets (P1 /P2) as far as their brands are concerned, there are lot of brands for whom UP is the P1 market. So our strategy of inviting these brands is justified as they are very relevant to this market as it is profitable to the brands. Another example is Ghadi Detergent, which advertises in all UP elections, they are based out of Kanpur and UP is their biggest market, and 73% of households in UP use Ghadi detergent in one form or another. Now coming to the consumer point of view, the sponsor on AbkiBaarKiskiSarkar will hold relevance to the brand’s users. This strategy of ours is all about relevance and not money. The criteria of making money from any property or election programming is the outcome, you cannot change the outcome but you need to change the process and we are confident that the outcome will be there as we are taking the right steps and changing the processes. The core thought of selecting the brands is their relevance and the in-depth study of which brands we should target.

The invitation-based approach to advertisers; will this approach keep away many advertisers in today’s highly competitive market?

We are very clear and the brand India TV is owned by Rajant Sharma and Ms. RituDhawan. Dhawan is a highly acclaimed television personality and has been in the television business form 1989, we as a company cannot get into any knee-jerk situations.

I disagree with this question, that is competition in the Hindi news genre, but for us our only competition is Aajtak. For example, a person owning a Honda City will look at options on the same range and not buy a NaNo, the same logic applies to a media planner or marketing head who chooses India TV and or Aajtak in their media plan, if the money does not come to India TV it goes to Aajtak and vice versa, the money that will not go to any other broadcaster. So for me, my main competition is Aajtak and nobody else.

We are the leader channel and the others follow us. The advertiser’s money goes to other channels only if India TV and Aajtak refuse. Today the whole television business is about demand and supply, our quality, reach across UP and the northern parts of India is beyond comparison as we have been very consistent. We have always been ahead of AAajtak by 25-30% right now for various reasons the difference has come down but we are still the leaders in this market.

How has the group managed to sail through this period of no rating by BARC? Would you ask BARC for a need base rating?

Without BARC ratings India TV has not been affected. I also say that no News Channel business has been affected due to this. If we see the advertising between April – September 2020 to now and if you compare it to 2021, there has been substantial growth. The last data published was Wk 39 in 2020. As for the established broadcasters and some of the others who have been there for many years, these BARC ratings do not matter beyond a point, as advertisers have been advertising on these channels for years and these channels have credibility and deals have been executed as per everybody’s liking so the advertisers know what they are buying. The brands/advertisers also know the benefits, for them these numbers really do not matter.

As far as News Channels are concerned numbers or for any channel in the Indian context is an indicator, not a bible. As per BARC, there are 45,000 households with peoples meters, about 180,000 people are monitored by BARC for their viewing habits and the overall television viewers in this country is 89 crores in a population of 130 crores. 89 cr is our universe and 180,000 are monitored. As per this data, it is an indicator and all smart media professionals are aware and know where they are buying.

On the need-based question, only BARC can answer this. The stance of the NBA has always been that data has been corrupted, which was revealed last year, and if there is no trust in that data, we have decided as a body that till there is a course correction by BARC we will not be interested in the weekly data. Even without data, our business has not been affected, the editorial team has been able to concentrate more on the quality of content we air. 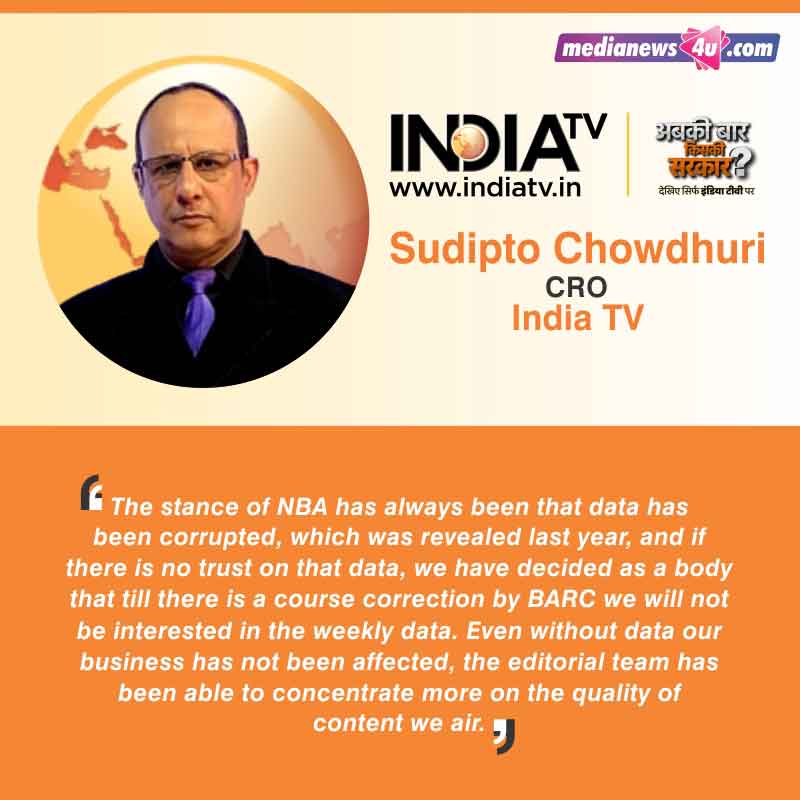