by Editorial
in Events, Featured
Reading Time: 1 min read
A A

New Delhi: The second edition of Times of India Gadgets Now Awards winners were announced at an event that saw some of the top executives from the tech industry attend the ceremony virtually.

The awards celebrated and honoured the best gadgets of 2021 that made our lives easy and convenient during the ongoing pandemic. There were 15 product categories in all including smartphones, laptops, tablets, gaming devices, audio devices, and wearables. The winners were announced under 2 heads – People’s Choice and Jury Choice. The People’s Choice winners were decided based on audience votes.

“I congratulate each winner and look forward to the 3rd edition celebrating the constantly evolving gadget ecosystem for the Indian consumers. Gadgets Now Awards is our initiative to recognise the tech industry’s efforts for producing innovative devices that impact our daily lives. Our eminent jury and audience have both come up with admirable winners. And the response to these awards, by people who voted because they felt strongly about their devices, overwhelmed us,“ said Durga Raghunath, Business Head, Times of India, Digital.

Following is the list of winners of Gadgets Now Awards 2021 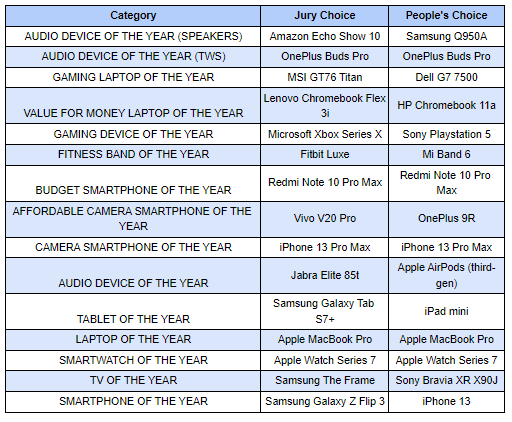