Mumbai: Two years ago, The Times of India in a historical initiative reinterpreted a 400-year-old tradition with the award-winning campaign #NoConditionsApply – Sindoor Khela. Conceptualized to promote gender equity, the campaign calls attention to the issue of inclusion of women in celebrations and combats the discrimination that they face in terms of their caste, creed, marital status, sexual orientation etc. The campaign became India’s most awarded campaign of 2018 winning accolades Indian and International platforms. In its 3rd year, #NoConditionsApply – Sindoor Khela initiative aims to reach the corners of the nation and beyond spreading this message of inclusive celebration that celebrates the womanhood sans any discrimination based on ‘labels’ and societal barriers. 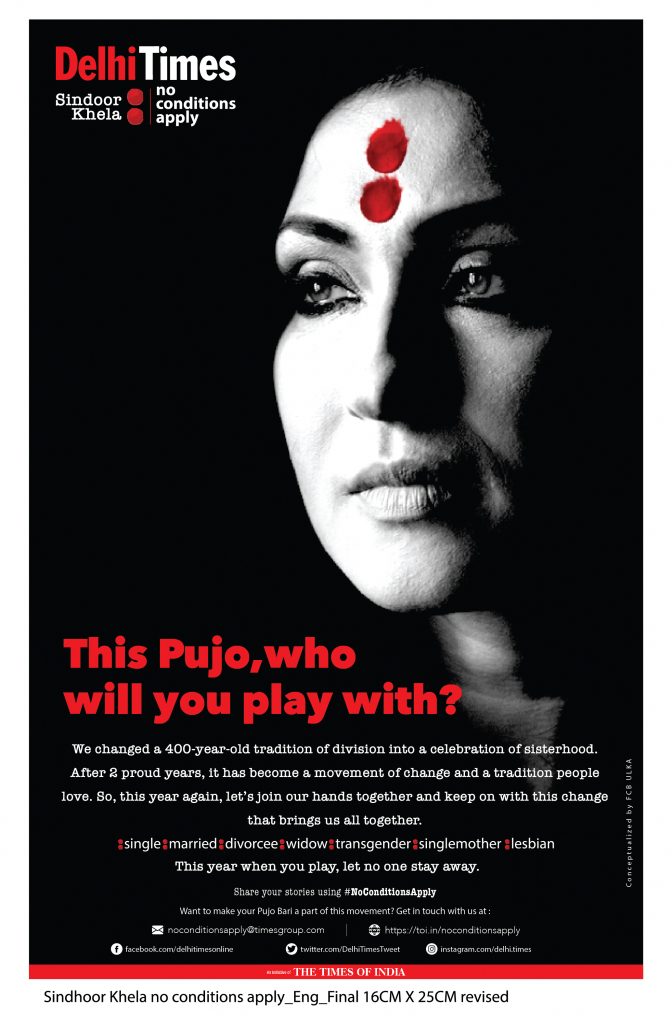 The campaign that was conceptualized in 2017 and was organized for one pandal in Kolkata. The Times of India along with the puja committee of Tridhara Sammilani, which is also one of the oldest and most prestigious puja pandals in Kolkata, organized the first ever inclusive Sindoor Khela – which invited widows and transgenders to be a part of this grand celebration. What started with a single pandal celebration, went on to become a national movement with participation from over 100 pandals in 2018. The campaign hopes the movement will achieve the status of a global phenomenon this year. Owing to the widespread popularity of the campaign in its previous two editions, TOI has been getting several requests of extending the campaign to newer cities. This year, the campaign spreads its wings across the country and beyond, and #NoConditionsApply encourages readers to host an inclusive Sindoor Khela and celebrate along with all sisters irrespective of the labels society may have attached to them. The campaign urges the patrons to bring a sister along to the celebration – sister being used metaphorically for any women they know of in their family, friend and neighbourhood, who have been shunned to be a part of the celebration. The campaign asks the patron to invite their lesbian sister, transgender sister, widowed sister, divorcee sister, single mother sister to the celebrations this year. Since its inception, the campaign has witnessed phenomenal support worldwide from people who wanted to offer their support and be a part of the movement. Garnering support from Kolkata’s agents of change – Rituparna Sengupta, Gargee Roychowdhury, Manobi Bandyopadhyay and Sohini Sengupta the campaign extends an invitation to women to #BringaSisterAlong this Pujo. With the phenomenal success of its previous editions, garnering 718 mn reach over the past 2 years, the latest edition aims to extend inclusion not just in Sindoor Khela but across all celebrations as part of the fabric of our tradition.

Commenting on the launch, Sanjeev Bhargava, Director, Brand TOI, said, “The #NoConditionsApply – Sindoor Khela campaign is extremely special to all of us, owing to the change that it has fostered across the various communities in India. While it is contextualized to a Bengali cultural event, the message of inclusive celebration and sisterhood resonates with everyone. We have always left no stone unturned in spreading the message across the various strata of society. Our success lies not in the awards that this campaign has garnered but in the fact that the initiative has grown from strength to strength and is rapidly becoming a symbol of inclusiveness.  We are grateful for the overwhelming response we have received from women across the country who have shared their celebrations with us. The fact that it is back for the third time is testament to the widespread movement that the campaign is now. I thank everyone who has supported us in making the change happen.”

Speaking about the campaign, Swati Bhattacharya, Chief Creative Officer, FCB Ulka said, “This piece of work has been a big emotional milestone for me personally. This bloodless coup of a campaign shows the world that joy love friendship and beauty can help break down walls an inclusive Sindoor Khela shows us that sisterhood is one of biggest ideas that can change the world we live in.”

The campaign has been lauded with a number of prestigious awards like the Gold Glass Lion; which is the Lion for Change at Cannes 2018, a Yellow Pencil along with many Pencils at the D&AD, a Black Elephant and 4 Blue Elephants at the Kyoorius Creative Awards, 4 awards at Spikes Asia including a Grand Prix in the Glass – The Award For Change category and many more wins at The One Show, Laadli Awards (SE Asia), Effies and Abby’s. This celebration of women from all walks of life won millions of hearts from across the world including personalities from the Indian Film Fraternity like Bipasha Basu, Taapsee Pannu, national award winner Srijit Mukherji, music maestro Shekhar Ravjiani among many others who have lent support to the cause on social media. The effort has also seen support by luminaries like Vidya Balan and LGBT activist Laxmi Narayan Tripathi.