We are providing an opportunity for viewers to opt for the best of entertainment in the comfort of their own homes: Pradeep Dwivedi

They announced STX films’ ‘Greenland’ will be available exclusively in India on the Eros Now platform in March 2021. In addition to Greenland, other marquee content from STX Films such as Horizon Line, Queenpins, Copshop, American Sole, The Marsh King’s Daughter, Run Rabbit Run, Devotion, Every Note Played, and Memory will also be launched on Eros Now in India over the next 18 months. In addition to these premiere films, First Day, First Show will also include premium programming from multiple content partners across languages. The ‘First Day, First Show’ offering is separate from the Eros Now Prime English-language service which will be launched shortly. ‘First Day, First Show’ and Eros Now Prime together will allow the company to target Indian consumers with higher disposable incomes, particularly in larger cities, which will improve the net effective ARPUs in India.

On the launch of ‘First Day, First Show’, we spoke to Pradeep Dwivedi, CEO – India, Eros STX Global Corporation on this offer from the Eros Now platform.

It is a demonstration and reiteration of our commitment to bringing the best of Hollywood to India.  Last year, when we merged with STX entertainment to form Eros STX, we had promised Indian audiences that we will bring them the latest of Hollywood movies without any significant waiting period. The merger enables us to offer premium content for our global audience base and Greenland is a first of many such exciting titles to be presented this year. In addition to Greenland, there are some other marquee content from STX Films such as Horizon Line, Queenpins, Copshop, American Sole, The Marsh King’s Daughter, Run Rabbit Run, Devotion, Every Note Played, and Memory that we plan to launch in India over the next 18 months. In addition to these premiere films, First Day, First Show will also include premium programming from multiple content partners across languages. 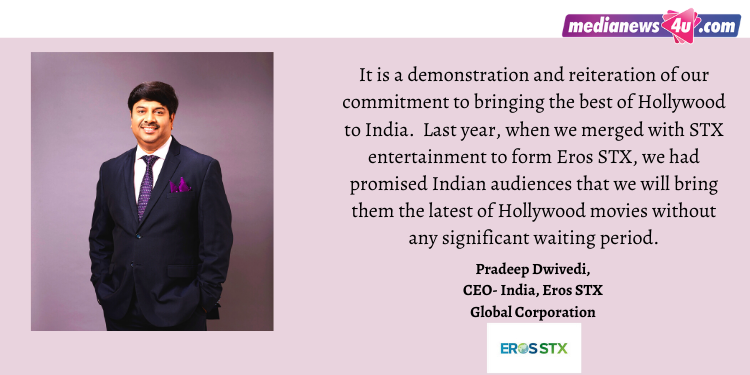 The format of ‘First day, First show’ is on the fact that people today want to watch amazingly high budget action movies in theaters, but are hesitant to go because of restrictions. We are providing an opportunity for viewers to opt for the best of entertainment in the comfort of their own homes. We wanted people to have an experience of content pay per view basis with an access to all the platforms. So for example, today if you have a Eros Now subscription it allows you access to watch content on four devices like you mobile, iPad, Television and laptop from a single account.

The commercial objective is obviously the last objective and it depends on the money to make this movie. It had tremendous reception in Europe where it ran in theaters whereas in the US, theaters were shut down, we tied up with HBO; HBO Max which is their OTT service is replicating PVOD service in US wherein audiences can pay and watch the movie. For them, after one month of PVOD service, the movie will be available as part of the library and for us obviously we believe that in the long run, the movie will be gradually a part of the content library.

The I&B Ministry has announced the opening of theatres with full occupancy from 1st February. Why did you think of launching ‘First Day, First Show’ now?

Even though in certain markets, theaters have reopened with 50% restriction, there are still audiences who are a bit reluctant to come to the theatres. Considering these situations, there were two options in front of us, either do a limited theatrical release that goes to a certain number of cities, with only limited audience being able to watch it. We found out that audiences are significantly pivoting to OTT platforms and are willing to consume content on PVOD services. This allows better access to audiences across the country and once the PVOD window is over, we can perhaps run the movie in theaters as well if needed. But we haven’t taken any decision as yet. Let’s say after two or three months once the theaters are more freely open across the country, the movie can also be made available for theatrical release as well, but we don’t want to keep the audience’s waiting for that. We have now gone ahead and announced this launch and in fact all the Hollywood movies coming to India from Eros STX will be first made available for ‘First Day First Show’ till the time theatrical releases completely stabilizes. 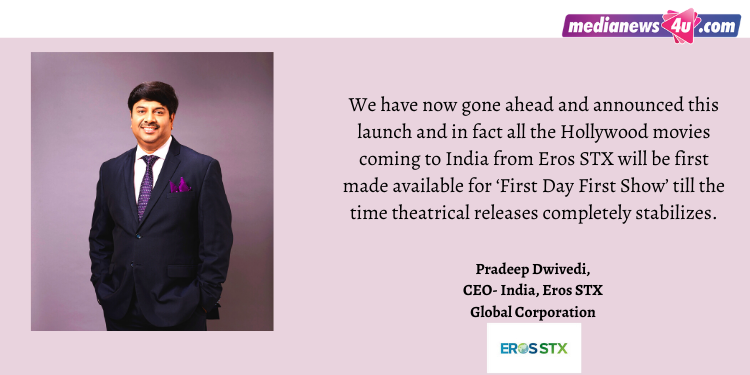 Was this also a business strategy to see a surge in subscriptions for Eros now and how will this target the non-English speaking audiences of Eros Now?

Clearly, we do believe that this will create an improvement and enhancement on the brand image of Eros Now with premium content being available on the platform. We are available in the entire Tier 1 and urban Metro markets along with some level of upper echelons of the Indian market where English language content is consumed and appreciated. The issue really is about how we use these opportunities to expand the wider set of audiences that we are not catering to today. For example, premium Indian audiences are not a segment that we are catering today in the traditional Bollywood content-driven Eros Now strategy within episodic content in different languages. We look at a combination of Hindi plus regional languages like Tamil, Malayalam, Bengali, Punjabi etc. and create compelling content on the platform, we don’t want to let go of both the set of audience that allows us to cover the entire spectrum of the India market. First Day, First Show’ and Eros Now Prime together will allow us to target Indian consumers with higher disposable incomes, particularly in larger cities, which will improve our net effective ARPUs in India. 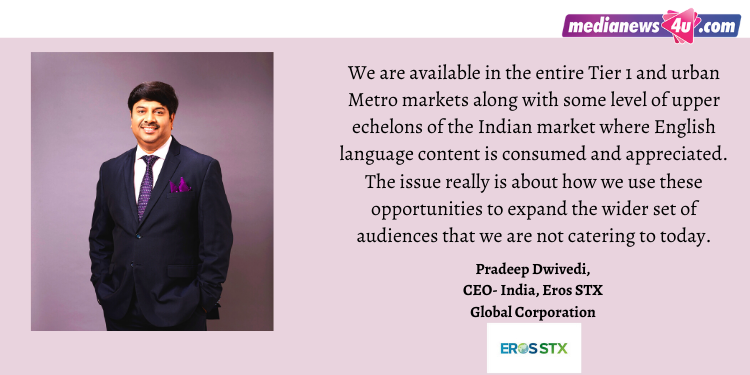 As distributors, how do you see Bollywood content in India, especially, in the Tier 2 and Tier 3 market in pure English and not the dubbed version?

Hollywood content in India always has had a challenge. Perhaps a good example is where they really monetized to target an audience and it has been mainly kids and younger generations. But in terms of making deeper inroads in the market, we wanted to do a fundamental change that is obviously significant that nobody else has done in India yet. As we move forward, we will build more associations for Hollywood content in the Indian market as the right response, we are investing and working closely with Microsoft and other technology partners, using artificial intelligence and machine learning to create the technology to be able to do on the fly dubbing on the fly subtitling, making sure that audiences even if they are not well versed in English, etc. can read it in their own local or Indian language, understand and appreciate and enjoy the content that we put out in Hollywood especially. This is clearly a part of our technology roadmap, as well as the consumer proposition roadmap. 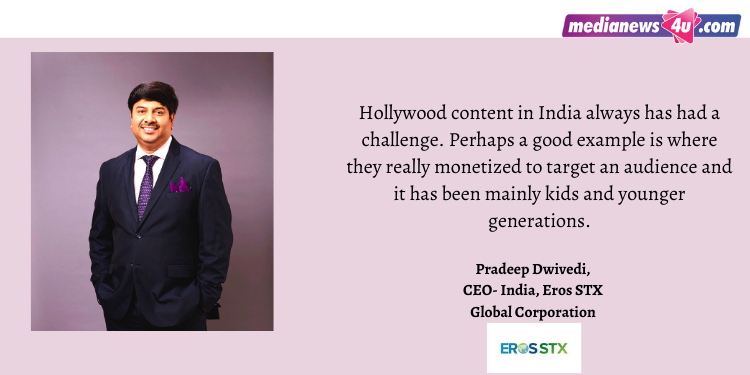 Will there be a special price for ‘First Day First Show’ or will it be part of the premium subscription?

First Day, First Show’ will be available at an additional cost of INR. 149 per film to Eros Now subscribers in India. We are limiting the price to a very compelling price point and also setting a benchmark in terms of the way we could either price it higher or lower the value or as a completely free offering. For free content, audiences may not appreciate the kind of investment that would have gone into making the movie. We want people to value the movie, the kind of investment that has been put and that’s the idea behind people to pay for premium content. I can assure you that there is a similar and a very significant lineup on the Bollywood front as well. I will be happy to come back to your and share more details very soon.

The One Club launches We Are One anti-hate program

New York: The One Club for Creativity takes a significant step to advance its creative activism efforts with the launch of WE...

Mumbai: One of the leading integrated creative and digital marketing solutions in Mumbai, Kolkata and among other cities, Digital Refresh...

When the world sees us they will realise that we Indians have great talent and ability to make global products: Mayank Bidawatka, Koo

Kerala assembly polls: TV emerges as the most preferred medium with 67% ad insertions