While we have a lot of differences, one thing most of us agree on is our favourite chocolate Cadbury Dairy Milk: Sukesh Nayak, Ogilvy

In the Independence Day season, when everyone is more conscious and vocal about their love for the nation,  and patriotism in general is at its peak, so to say, brands never miss a beat. We have seen numerous ad campaigns from multiple brands, with inspiring headlines and often, body copies of fervent expression. Obviously, humour, the staple driver of advertising across India, takes a back seat during the weeks 2 and 3 of August each year, and very logically too, due to the gravitas of the occasion. So ads come and ads go, but one campaign that has stood out and made a sweet impact – pun intended – is from Mondelez’s Cadbury Dairy Milk, a brand for which the month of August – due to Raksha Bandhan and Independence Day – is always one of high media spends. To their credit, the marketing and creative teams of Cadbury’s and its agency Ogilvy respectively, have made sure that the major front page jacket print campaign has hit home effectively, and with sensitivity.

Readers of The Economic Times in Mumbai, Delhi and Bangalore were intrigued to see what they thought were headlines misprinted in a regional language that was definitely not from their state – Telugu in Dehli, Kannada in Mumbai, and Marathi in Bangalore. 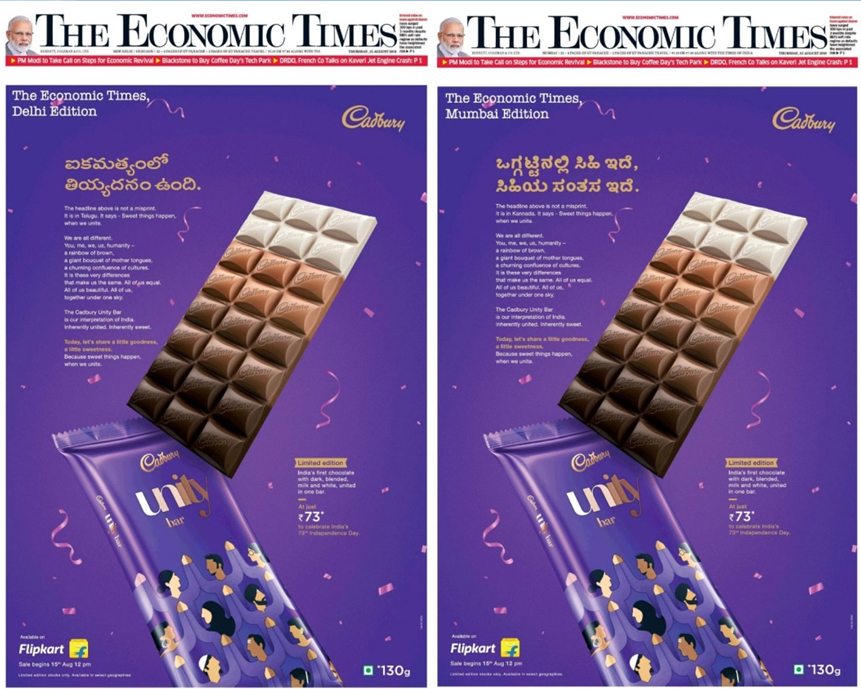 And beneath the apparently misprinted headline was the following copy:

The headline above is not a misprint. It is in Kannada/Telugu/Marathi.

It says – Sweet things happen, when we unite.

We are all different.

brown, a giant bouquet of mother tongues, a churning confluence of cultures.

It is these very differences that make us the same.

The Cadbury Unity Bar is our interpretation of India.

Because sweet things happen, when we unite.

And then comes the sell; a soft sell, really, to nicely round off the positive impact of the copy:

United in one bar.

Yes, the firm is, as an afterthought, hawking its chocolates, but the entire intriguing headline, body copy and therethrough the treatment and approach, is a winning one, and that afterthought hawking of its chocolates…? Sounds perfectly logical, and enters the message at just the right spot. The, well, sweet spot between CSR and Sales.

“A chocolate bar that stood for generosity, inclusivity, peace and most of all – unity.”, says Sukesh Nayak, Chief Creative Officer, Ogilvy on how this was the first ever national integration campaign created for Cadbury.

How was the bar called the Unity bar?

India is a diverse country, with people of different castes, creed, languages, regions, religions living together. While we have a lot of differences, one thing most of us agree on is our favourite chocolate -Cadbury Dairy Milk. From this simple truth was born the Unity Bar. The Unity Bar is a dedication to the multi-textured fabric of our nation. It narrates the tale of unity of diversity in a unique way. A product that for the first time ever, unites various chocolates into one single bar.

Since the name suggests Unity… How did you connect a product such as a chocolate to Unity and Independence Day?

Being generous and enjoying each other’s differences is all it takes to be more united. This thought translated into the product idea – different types of chocolates, united in one tasty bar.

On Independence Day, when the country comes together to celebrate a united India, it felt like the right moment to land our sweet and simple message.

How did you conceptualize the concept?

The print ads were published in newspapers across various metros but with a slight difference. Instead of the headline being in a local language, it was written in a language unfamiliar to that region. The body copy went on to celebrate this very unity in our diversity. For example, the newspaper in Maharashtra had a Telugu headline. The body copy then went on to explain the supposed misprint in Marathi (local language).

It was important to land the idea right. We worked together with Wavemaker (media team) and Mondelez to plan the media to ensure there was a good mix of regional and national newspapers.

How many previous national integration campaigns have you created for Cadbury?

Cadbury has been a brand that spreads the message of goodness and generosity, whether through its products or campaigns. However, this was a first where we created something right from scratch. A chocolate bar that stood for generosity, inclusivity, peace and most of all – unity.

Only online could give us the chance to make a very limited-edition product available across different geographies on the same day, at the same time.

Why only Economic Times? Don’t you feel a TOI would give the brand a wider reach? Or was it just the budget?

Like any campaign, an idea was presented. Several discussions amongst the teams at Mondelez, Wavemaker and Ogilvy led us to arrive at a media strategy that would work best for the idea.

So, yet another creative win for the excellent Ogilvy-Mondelez teams. Their creatives are always focused on getting to one single destination, whatever the route – whether it is cherishing relationships or celebrating festivals or expressing and feeling proud about love for the Nation. The Ogilvy-Mondelez creatives unerringly end up warming hearts, leaving the end user with a fuzzy feeling.

And these print creatives this Independence Day have done that and more.

As the new wave of COVID-19 grips India, we’re all fighting a tough battle to stay safe and help the...

Zee Tamil strengthen its original content in the afternoon time-band with Chithiram Pesuthadi at 2:30 PM

Chennai: Zee Tamil, one of the leading General Entertainment Channel (GEC) in the Tamil Nadu market is set to launch yet...

My love for life, music, movies and food helps me remain spirited along the way: Suraja Kishore – BBDO India