ZEE5 to continue reigning the OTT space in 2020

Mumbai: ZEE5, the largest OTT player in the country unveiled their calendar for the first month of the new year.

At an event held at the ZEE5 headquarters in Mumbai,  Aparna Acharekar, Programming Head,  ZEE5 India along with talent from some of the shows, unveiled a power packed calendar for January 2020 with new launches across genres and languages.

Aparna Acharekar, Programming Head, ZEE5 India shared, “2019 was a fantastic year where we launched over 100+ Originals across top Indian languages and created a milestone in the Indian OTT space. We are the only OTT platform in the country to have consistently delivered originals across genres and languages for all audience groups. We are all set to break our own records in 2020 and are constantly working towards ensuring an engaging experience for our viewers.”

Books come to screen in January with two shows adapted from books of popular Indian authors. ’Never Kiss Your Best Friend’ a millennial rom -com based on the young author Sumrit Shahi’s best-selling novel of the same name. State of Siege: 26/11 is a gripping tale of the terror attacks that rocked Mumbai on 26/11. The show is based on the book ‘Black Tornado: The Three Sieges of Mumbai 26/11 written by top journalist and author Sandeep Unnithan.

ZEE5 also adds to its bouquet of Telugu originals with a romantic drama series titled Anaganaga.

Home Minister Bharat Daura is the New Season of the most loved and longest-running show on Zee Marathi. After winning hearts and traveling to 10lakh kms in Maharashtra for the last 15 years, the renowned host Aadesh Bandekar is on a journey to meet Maharashtrian housewives outside Maharashtra across India. So, stay tuned to see who wins this game of Paithani Saaris in the new season, anytime anywhere on ZEE5.

Kahat Hanuman Jai Shri Ram is a mythological series based on the tales of Bal Hanuman. The story begins from the time Bal Hanuman was conceived to Maharani Anjali and Maharaj Kesari played by Sneha Wagh and Jiten Lalwani. 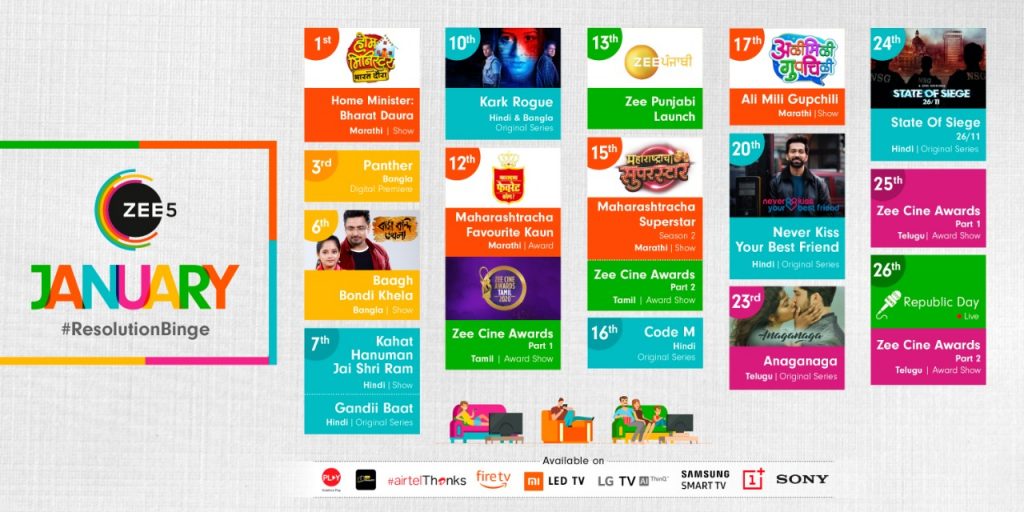 Gurugram: Beauty Retailer Boddess.com opens its first flagship store in Ambience Mall, Gurugram. After its exciting online launch with over...

Mumbai: SBI General, one of the leading General Insurance companies in India, is celebrating road safety week by launching an...

750+ Exclusive Advertisers were present on National and 6900+ on Regional Channels 2021 on Television: TAM Report

Broadcasters welcome Govt’s diktat on the release of News Channels Ratings; Optimistic on revival of AdEx