by Editorial
in Featured, Market Analysis, OTT
Reading Time: 3 mins read
A A

Axis My India, a consumer data intelligence company, released its latest findings of the India Consumer Sentiment Index (CSI), a monthly analysis of consumer perception on a wide range of issues. The October report highlights that a significant 30% plan to watch new movies on an OTT platform, 24% plan to watch it on Movie theatres & 45% prefer to wait for new movies to arrive on television. The survey further discovered that 6% have heard about the term Metaverse and look forward to experiencing AR/VR while shopping for products. 12% of those surveyed revealed that have created content/video and uploaded it on social media such as Instagram/YouTube which signifies the rise of the content creator’s generation.

The October net CSI score, calculated by percentage increase minus percentage decrease in sentiment, is at +8, from +10 last month reflecting a decrease by 2 points.

The survey was carried out via Computer-Aided Telephonic Interviews with a sample size of 10058 people across 32 states and UTs. 67% belonged to rural India, while 37% belonged to urban counterparts. In terms of regional spread, 24% belong to the Northern parts while 23% belong to the Eastern parts of India. Moreover 28% and 25% belonged to Western and Southern parts of India respectively. 61% of the respondents were male, while 39% were female. In terms of the two majority sample groups, 34% reflect the age group of 36YO to 50YO, while 30% reflect the age group of 26YO to 35YO.

Commenting on the CSI report, Pradeep Gupta, Chairman & MD, Axis My India, said “Internet in general and social media in specific has shaped consumer experiences in all spheres of life. From creating content for Instagram/YouTube to using AR/VR for testing and buying products, consumers have found ways to express their individualities amongst their online and physical social networks. Internet has in addition provided flexibility due to which despite big screen launches, consumers are growing to prefer OTT for their viewing medium. The potential of the world-wide-web is huge and is only evolving and one can only expect it further enrich consumer experiences.” 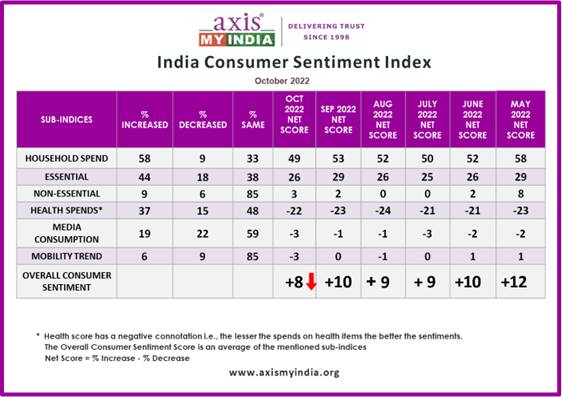