56% believe that India will be a developed economy in 25 Years, as per Axis My India August CSI Survey

Axis My India, a consumer data intelligence company, released its latest findings of the India Consumer Sentiment Index (CSI), a monthly analysis of consumer perception on a wide range of issues. At India’s 75th year of Independence, the Consumer Sentiment Survey (CSI) explored the citizen’s view across key facets of the growing Indian economy. From unravelling expectations from the government to improved life and livelihood, the findings also explored shift in mind-set with regards to social, environmental, and national issues.

The August report reveals that consumption has increased across 3 out of 5 relevant sub-indices i.e. overall household products, essential products, health products and media consumption. However, sentiment related to mobility has reduced by 1% from last month and sentiments related to discretionary products remains the same as last month. This month’s survey also highlights that though 44% of the respondents acknowledge improvement in living standards in the last few years, 34% are still concerned of inflation. Overall, sentiments direct towards an optimistic future of India in the next 25 years.

The report also shares a trend of how the consumer sentiment has fluctuated across the year, from coming out of the effect of the delta variant to the rise of sentiment during the festive season last year, the dip again during the Omicron variant scare and now the concern because of rising inflation.

The August net CSI score, calculated by percentage increase minus percentage decrease in sentiment, is at +9 which remained same as last month.

The survey was carried out via Computer-Aided Telephonic Interviews with a sample size of 10205 people across 34 states and UTs. 71% belonged to rural India, while 29% belonged to urban counterparts. In terms of regional spread, 24% belong to the Northern parts while 25% belong to the Eastern parts of India. Moreover 31% and 21% belonged to Western and Southern parts of India respectively. 64% of the respondents were male, while 36% were female. In terms of the two majority sample groups, 35% reflect the age group of 36YO to 50YO, while 29% reflect the age group of 26YO to 35YO.

Commenting on the CSI report, Pradeep Gupta, Chairman & MD, Axis My India, said “This survey has brought to fore interesting insights into the minds and behaviour of the Indian consumer. A sense of resilience, a belief in home-grown brands and an optimistic outlook towards the future is noteworthy. While inflation and lack of employment opportunities continues to be of concern, a major chunk believe that their living standards have improved in the last few years and as we come close to the 75th year of independence, Indian citizens are certain that India will be able to fight against all odds and most likely become a developed nation when it touches 100 years. 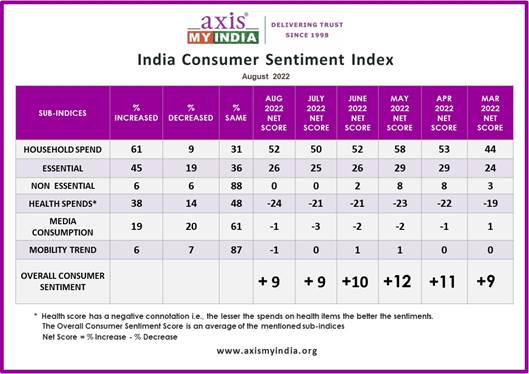 The Advertising Club to host M.Ad Quiz on 3rd February in Mumbai

The Advertising Club to host M.Ad Quiz on 3rd February in Mumbai

Due to digital disruption, the traditional approach to brand marketing is no longer effective and customers are now in control....