87% urban Indians give high ratings to the govt on its handling of COVID-19 crisis: Ipsos 13-nation COVID 19 Global Survey

New Delhi: People’s report card on the Modi govt’s handling of COVID 19 crisis is out! The govt has passed with distinction, with an overwhelming 87% of urban Indians giving the government high ratings. 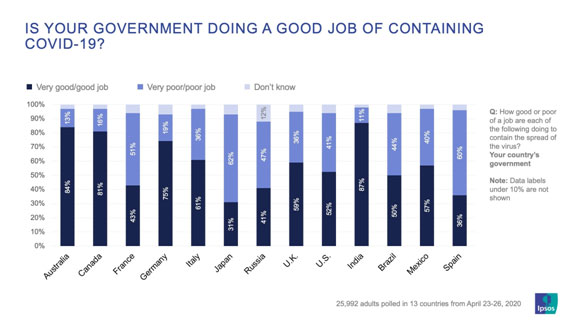 “Govt was quick to enforce a total lockdown and took a number of bold, precautionary measures to contain the spread of the coronavirus. Now, the government is considering a cautious, partial re-opening in the green zones. The government’s handling of the COVID-19 pandemic has been lauded by the majority of the populace, polled in the survey. Though the govt faced a number of unforeseen challenges along the way. Still, early days,” says Amit Adarkar, Ipsos India CEO.

Global Perception of the World Health Organization (WHO)

After facing a lot of initial flak worldwide on the handling and seriousness of the pandemic, the role of the World Health Organization (WHO) has found favor with the majority of people in 11 out of the 13 countries surveyed in containing the spread of COVID-19, but this sentiment has fallen since March in nine out of 12 countries where Ipsos has tracked opinions.

75% of urban Indians positively view the role of the WHO in containing the spread of the coronavirus. Though there is a dip.

People in the emerging markets of Mexico (78%), India, and Brazil (75%) are most likely to be satisfied with the WHO’s response, followed by the developed nations of Canada (69%) and the U.K. (64%). The only two countries where more people disagree with the job done by the WHO are Japan (63%) and Russia (42%). 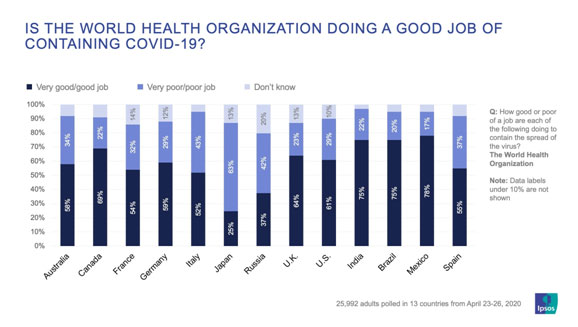 The countries seeing the biggest decline in regard for the WHO’s response are France (-14), India and Russia (-12), and Australia (-9). Germany (+13) and Japan (+2) are the only countries where satisfaction with the WHO’s role has increased. 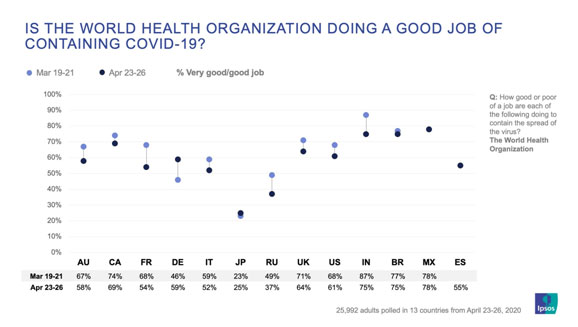 These are the results of an Ipsos survey conducted April 23rd to 26th, 2020 on the Global Advisor online platform among 25,992 adults aged 18-74 in Canada and the United States and 16-74 in Australia, Brazil, France, Germany, Italy, India, Japan, Mexico, Russia, Spain, and the United Kingdom. Where available, tracking results from previous studies, conducted through April and March, and selected results from February are referenced by date.

Please get in touch with natalie.lacey@ipsos.com, COO, Global Affairs, Ipsos,  for queries.