BrassTacks is more about shining the light than dialing up the heat: Zakka Jacob, CNN-News18

In 2014 Zakka joined CNN – News 18, in his span of 7+ years in CNN- News18, Zakka has managed to carve a niche in the crowded and noisy primetime which is dominated by loud talking panelists and shouting matches that pass off as debates, he also brings an international flavor to CNN-News18’s programming.

Zakka’s calm demeanor and sharp questions have quickly earned him the moniker “thinking man’s anchor”. He is the only Indian anchor who has won the prestigious Asian Television Award for Best Anchor in Asia, twice, that is, in 2016 and again in 2018.

Zakka worked with China Central Television, becoming the first South Asian face on Chinese National TV from 2011 -2014. He started his career in 2001 with Sun News, a regional channel before moving to New Delhi with Headlines Today. At the time of Debut, Zakka was the youngest male anchor on Indian news TV.

In this Leaderspeak Zakka Jacob, Executive Editor, CNN-News18 speaks to us about his journey, the changes in News reporting and other things

From being the youngest Male News Anchor to now, how has your journey been?

It has been exciting no doubt. It is also had its challenges along the way. Nevertheless, TV news is an exciting industry, being in a live newsroom especially when a big story breaks, nothing is comparable to that level of excitement and passion. 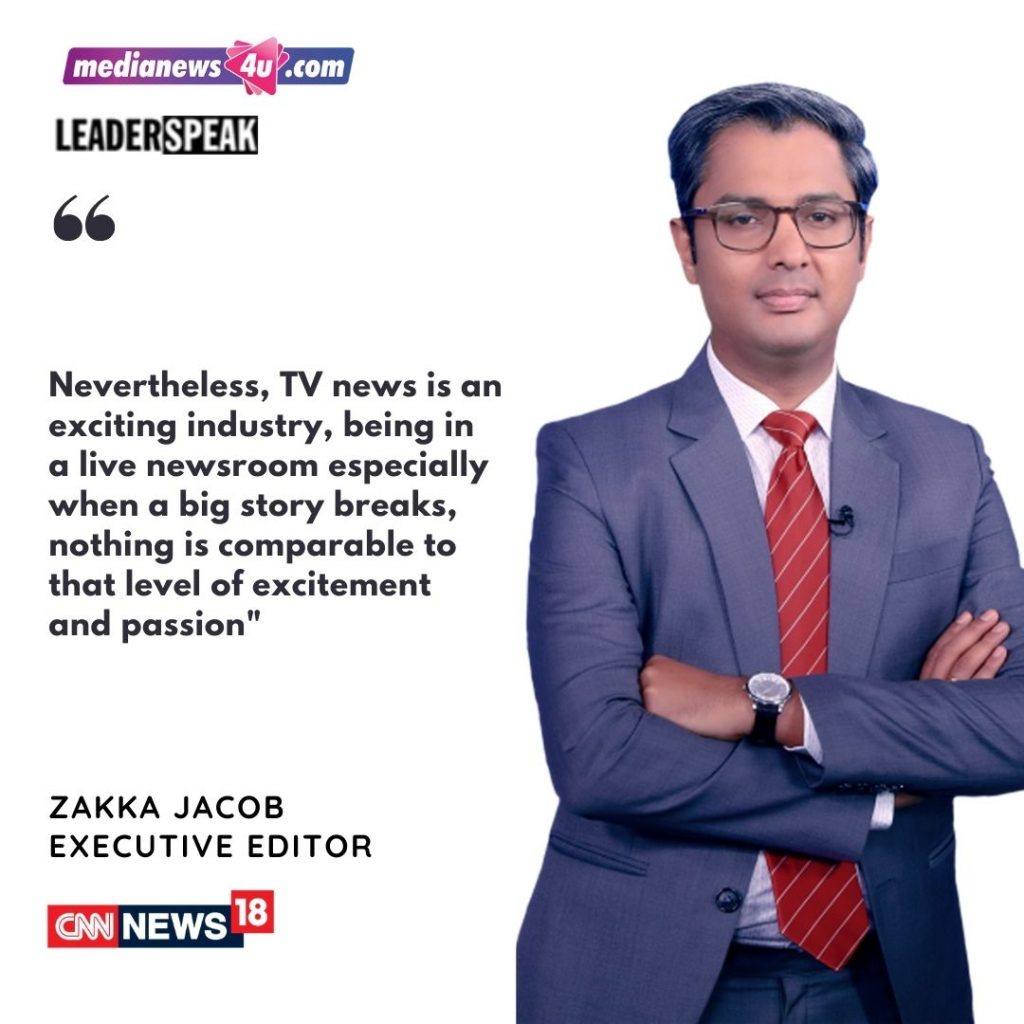 You worked with a Chinese News Network, how was your experience?

CCTV back in the years that I worked there was a much more benign organization. The Chinese wanted to launch something that could rival BBC, CNN and Al Jazeera. Unfortunately somewhere along the way they lost that initial USP. It is now more like a Chinese state propaganda extension. I caught the early signs of it in 2014 and that is why I left and have not regretted it since. 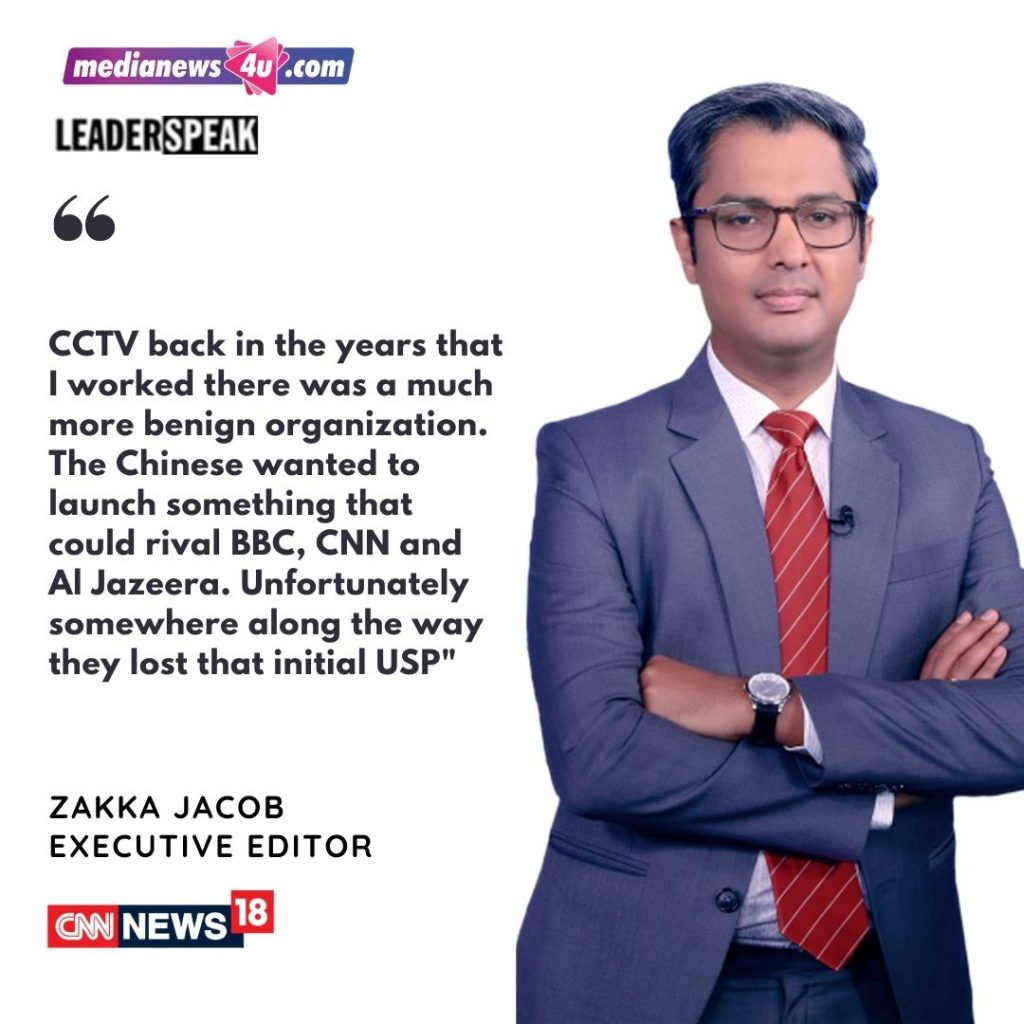 Brass Tacks the channel’s flagship at 9 pm, how is it different from the other channels, is there less of noise?

For starters, it is not a meaningless shouting match. There are no 8 or 10 window talking heads who are shouting at each other. BrassTacks is more about shining the light than dialing up the heat. We want to go deep into any given top story that day and break it down in an explainer format that even the lay person can understand. I look at my role on that show more as an explainer than a debater. 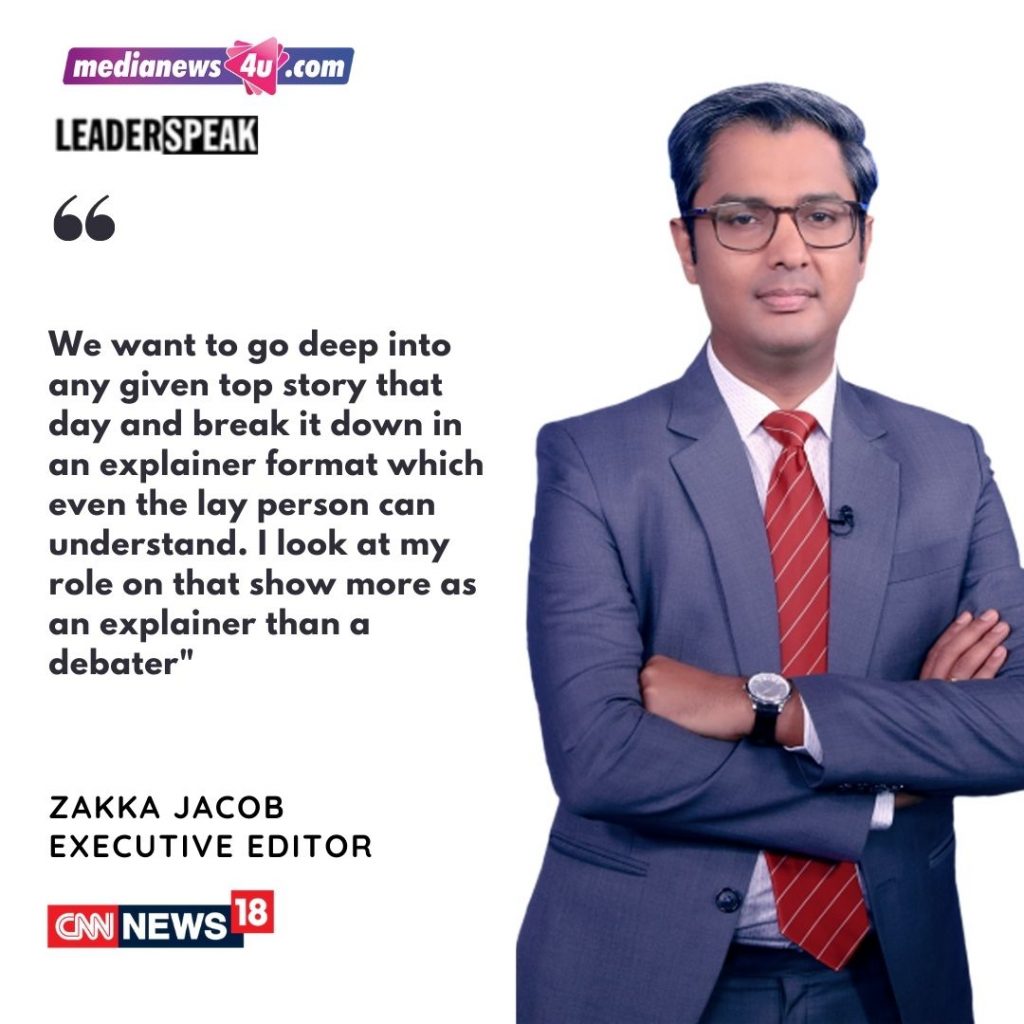 How do you curate for Brass Tacks?

Clearly there are the top stories of the day, some of which you cannot avoid. But there are also stories that you would see in the inside pages of the newspaper which could arouse curiosity. We target such stories as a second lead. It is a mix of both the top story of the day and one off beat story which catches your eye but will never be featured on the 9 pm show on any other channel. 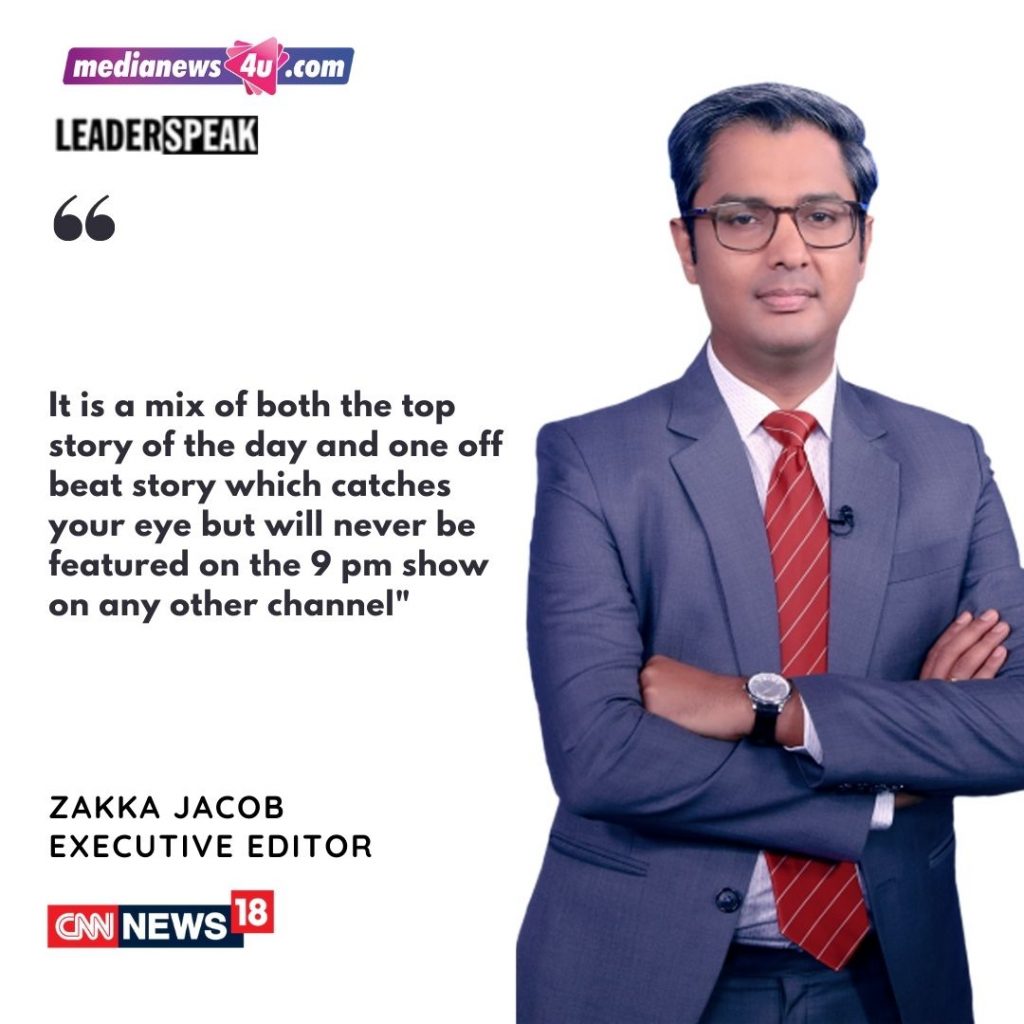 In these 10+ years of your career, what are the changes you are witnessing in the field of Journalism?

It is going to be 17 years this November. For starters, newsrooms have become younger, leaner and smarter. That is a good thing if you ask me. TV has also stopped chasing breaking news. Because most news breaks these days either on Twitter or other social media. What TV does, is it amplifies a story. It takes a big breaking story and runs with it. Only TV news can do that. No other medium allows you to do that. And so, according to me, TV news will always have a role. Are you seeing Regional News genre peaking in the past few years as compared to English?

There will always be space for English because it is the language of aspiration. Clearly English will not have the mass appeal of Hindi news or other regional languages. But it will always have amplification value. Just see the recent story, even Sushant story acquired the life it has after English news TV picked it up. As BARC itself says, there is easily another 100 million homes that need to be connected to cable over the next five to ten years. So I do not see English news TV losing influence or eyeballs too soon. Even with the pandemic, the overall universe is now bigger than it was before Covid. So I see the positives. 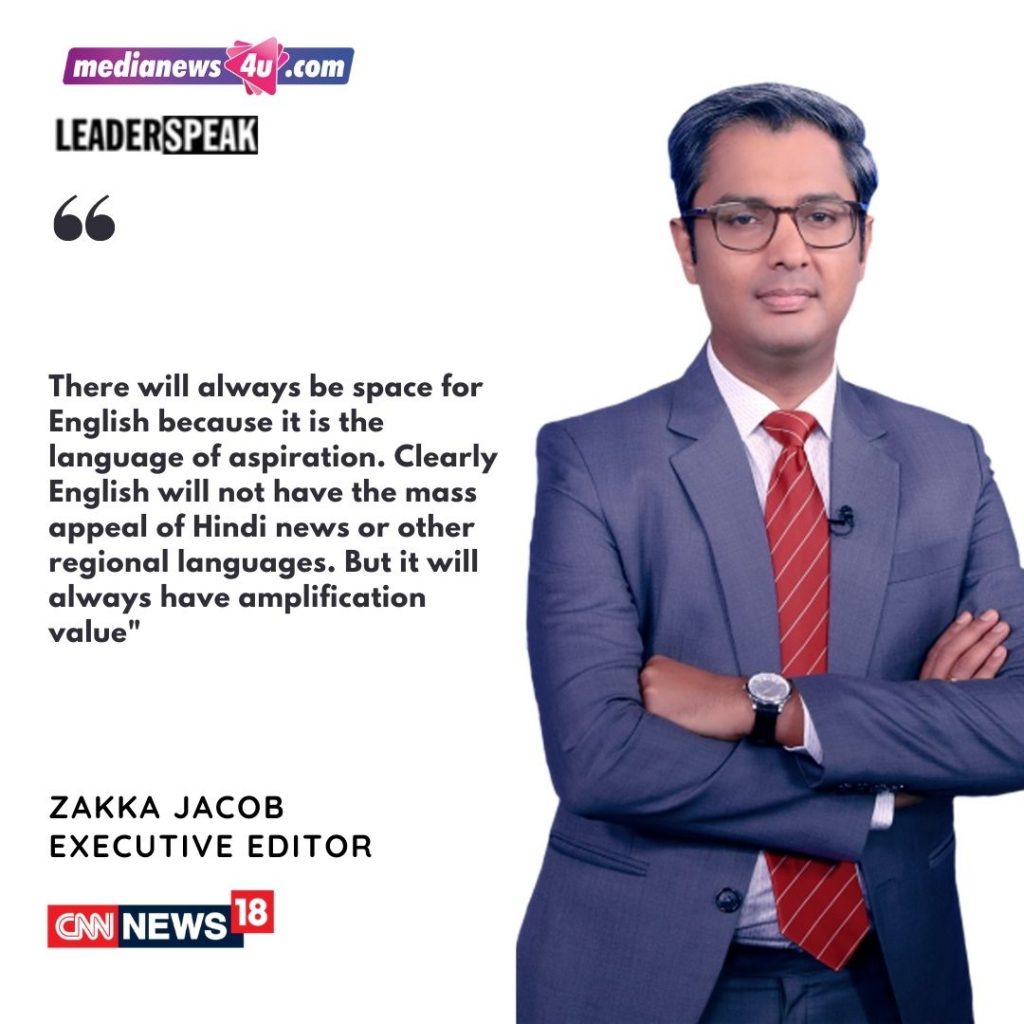 News Television is hectic, how do you de-stress?

Fortunately, I have a good set of friends, outside of work. We used to meet almost every other weekend before the lockdown struck. So it has been a bit hard over the last few months, not meeting any of them. I also spend some time with my daughter, although I do not get enough of it. That has to be the greatest stress-buster of all.

A mentor you want to mention? What specifically did you learn that has held you in good stead throughout?

AS Panneerselvan who gave me my first break in news TV. And Radhakrishnan Nair who hired me for CNN IBN after I returned from China.

Your go-to activities on the weekend?

I am the designated cook on Sundays in my family. That has to be a preferred weekend activity. Although with the lockdown there is no distinction now between weekday and weekend. News is anyway a 24/7 job. I am lucky on the odd Sunday when news does not break. But it almost always does. 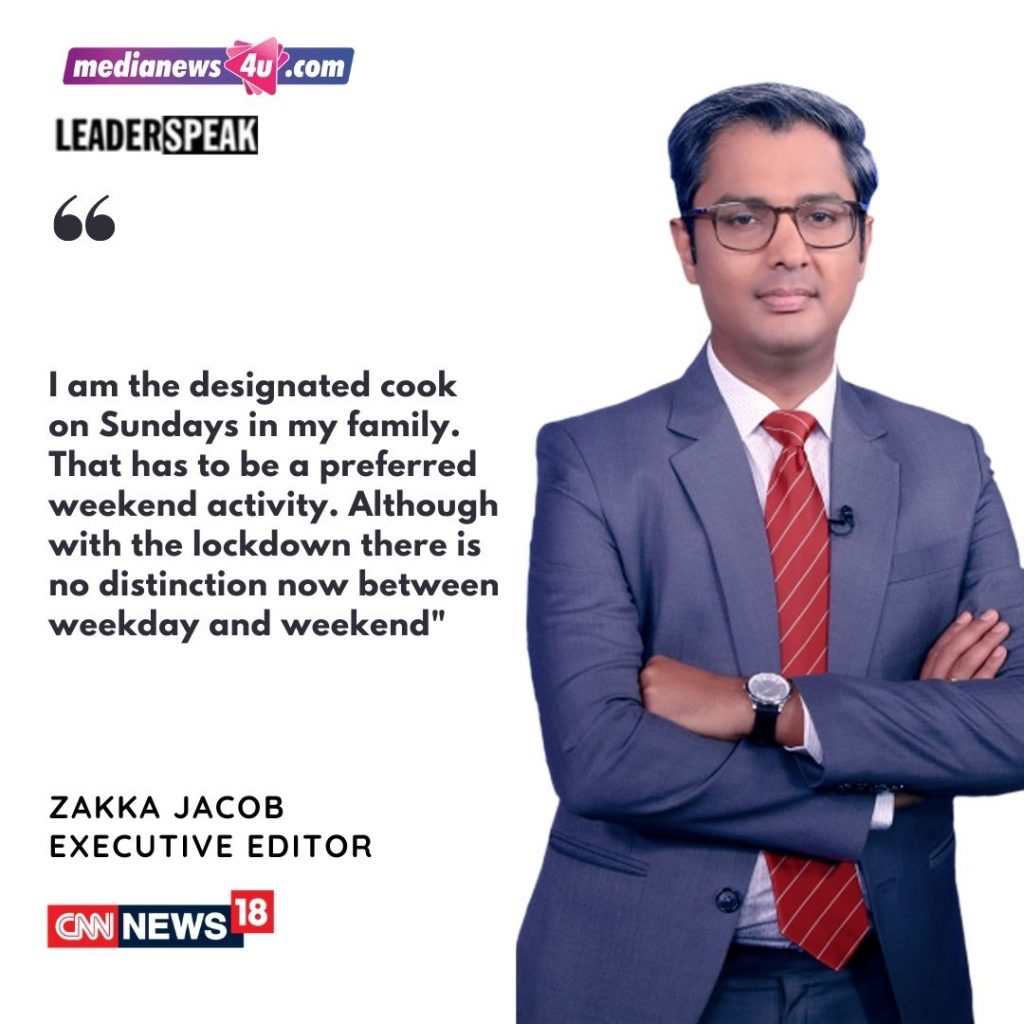