by Editorial
in Featured, My Column
3 min read

Comic based Convention (Comic Con), the largest pop culture event with its low key one city inception in India, Circa 2011,has expanded into an annual event, straddling Delhi, Mumbai, Ahmedabad, Pune, Bangalore and Hyderabad. It is the ground zero for pop culture and entertainment, connecting all stakeholders, fans meeting comic crazy people, creators and industry, actively engaging over 2 days.

The Mumbai chapter of the Comic-Con was held on the 7th and 8th of December and I attended plainly out of curiosity with my two teenaged kids in tow. My first impressions were that this is a pureplay marketing spectacle! What amazed me was the realization and easy adoption of experiences, among the marketing fraternity, especially among the large exhibitors with deep pockets, for instance! The marketing world now realizes the importance of ‘experiences’. The Convention is designed to provide fans and visitors with an experience that they won’t forget. And will make them go back each year.

How does it play out?

Characters live and breathe for certain people as much as brands live for marketing folks. Passion and intensity with which the characters, themes and stories were used for merchandising everything possible, was incredibly amazing – it’s a different world out there, waiting to be experienced.

Right from the volunteers to those manning the stalls, everyone was a comic/ character fan. Not one person seemed like he/ she didn’t want to be there. In fact, the conversations veered and were clearly both ways and everyone understood the common language and each other’s passions.

The exhibitors/ sellers themselves were fans, and there was a completely different level of connect and engagement, when they showed you options of what you could buy. They could guess your interests and show similar themes or characters once they read your mind and the interaction was about wonderful conversations, sharing many laughs over some characters, or some experiences.

The merchandizing was of a dazzling range. Most popular were T-shirts, followed by figurines (collectibles) and jewellery. But you could find mugs, cushion covers, stationery, key chains, magnets etc.

Cosplay at the Comic Con is fans dressing up as their favourite character from a book, movie or video game. Many of these cosplayers were from the Japanese manga or anime. The best Cosplay wins and so an element of healthy competition kept it interesting for others as well. Camera crews were hunting for those in costumes to photograph and interview them. The fans TG is not restricted to just the younger kids or teens, as I witnessed several older folks >30 who were dressed in their favourite character costumes as well!

The engagement levels were very high, with activities, interviews, quizzes, gaming zones that attracted people to explore every corner of the hall where the convention was held

There were also zones for amplifying the experience and buzz for social media – selfie corners, uploading pics and tagging by visitors, rewarded with freebies, by exhibitors. 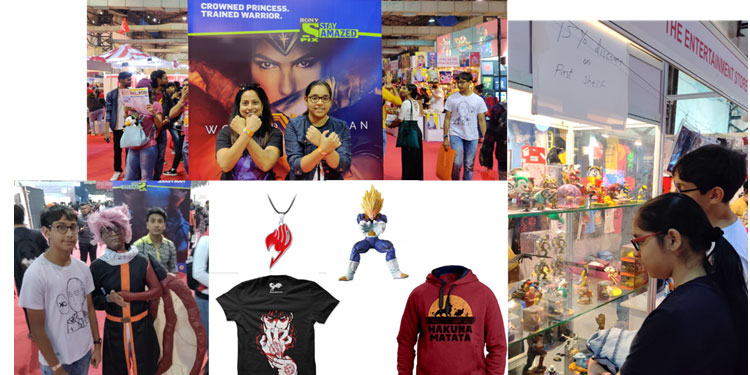 Built-in fan following is not necessary for impactful audience engagement. Attendees to have prior interest in your brand is also not necessary. Once you reach there, the experience and excitement will engulf you.

It was cool, geeky, nerdy and upmarket!

A few quick lessons for next time for me:

There should be more engaging activities rather than just a bazaar-style stalls, selling their wares. I felt the ‘experience’ could be dialed up more, given the pop culture and the niche audience with such a specific passion. There could be more hands-on games, more areas for exchange of ideas, more connect somehow.

You need at least 4-5 hours, to navigate and soak up the convention, if you really want to enjoy it. 2.5 hours, put aside by me, did not do complete justice.  You can’t be rushed into this. You must experience it fully, and absorb the culture.

It was my first Comic Con; now I know what the brouhaha was all about!  Now that I know what to expect, next time I would like to invest time in understanding all kinds of booths, activities etc. Technically, be a more informed attendee.

Book your tickets online (they come steep); and carry cash as far as possible, though PayTM is widely accepted. Even food options are varied but pinch the pocket. To loosely put, it is a premium fete.

The author, a few thousand rupees lighter, with happy teens, is also a market researcher.

Advertiser spend on sports sponsorship is expected to rise 5.0% this year to reach $48.4bn worldwide - the strongest growth...

Accuweather Partners with Httpool to Expand Presence in India

Mumbai: Httpool and AccuWeather are pleased to announce the appointment of Httpool, as AccuWeather's official ad sales partner in India....

We aim to go beyond the conventional territories: Vibha Chopra on Focus 2020