The Bengaluru edition of Deccan Chronicle was succumbed by the overwhelming growth of digital media.

While the decade comes to an end, so does the ink of the Bengaluru edition of the decade old Deccan Chronicle. Recently we saw a similar scenario with DNA in Mumbai.DNA too went the digital way and shut down its print edition.

“I do not believe that Print media is suffering because of Digital media growth.” Said, Arvind Kumar, Executive Director, Ad Club Bengaluru.  Continuing Kumar said, “The Print is the oldest medium in the world and will continue to be, provided they understand the ground realities and adapt themselves quickly to the changing dynamics of the business.”

Every year we see various media agencies, research agencies launch reports with numbers showing staggering growth of various forms of media; and when such sad news comes out, all those numbers seem to be just numbers that don’t seem to be true!

Meanwhile, In an excellent case of Moment Marketing, the very next morning – the Bengaluru edition of TOI made an allout efforts to woo the readers of Deccan Chronicle with this front page ad, that extended a bornhomie to the aggrived DC readers: 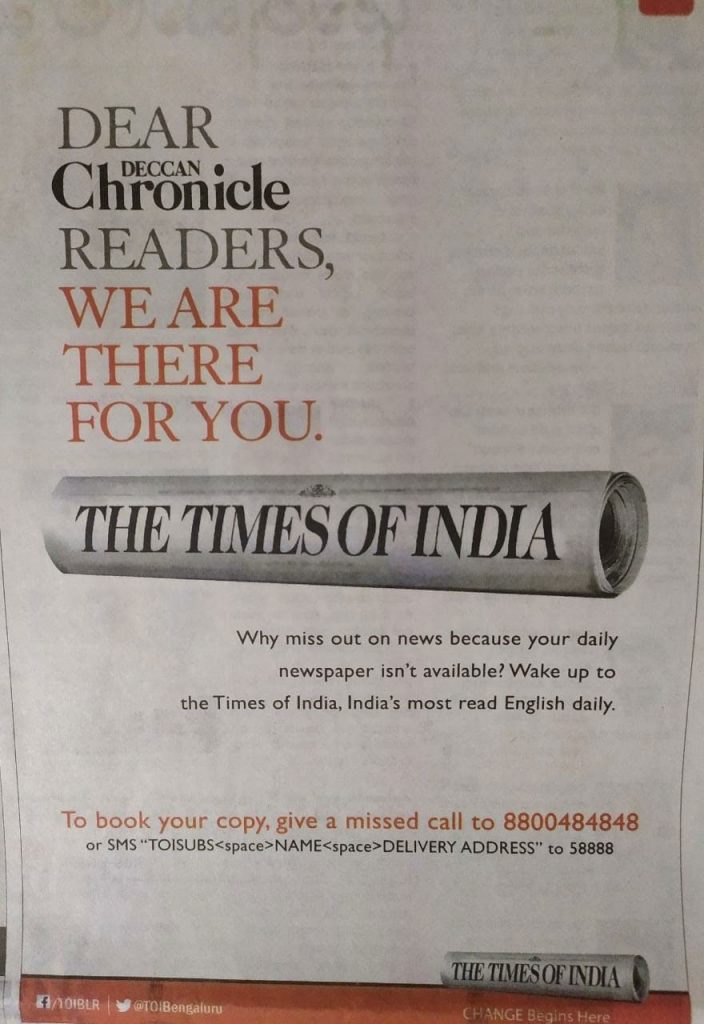 Well some of the journalists at DC, we hope will be retained to work for the online version, some of them would definitely lose their jobs. A sad moment indeed.

The question that comes here is what cans the industry as a whole do about this? While newspapers are somehow trying to move on with times and trying to adapt to the difficult circumstances by going the digital route… What are the other key stakeholders of the industry doing about this?

“We have entered the Dog-eat a Dog world long ago and new competition is not going to be complacent or kind to existing players.”

Be proactive or reactive? Kumar’s suggestions to media owners, “It is important for the media owners to make constant appraisal of their brands and where they stand vis-a-vis the market, an annual swot analysis and taking many pre-emptive steps to ward off possible threats, using technology to control costs, cross media holdings, intelligent brand consolidation and a thorough overhaul of the print media business model will only ensure their continued survival.”

Will this have a domino effect on the entire print medium or it’s just a one-off case? That’s something only time will tell; we only hope that journalists and people working day and night shouldn’t lose their jobs because of the ever growing digital medium.

Introspecting on the advertising based revenue model, Kumar said, “Print historically, especially dailies had a business model of solely depending upon Ad revenue as they lose with every extra copy that they sell.  That model should stop and you should make the reader pay for what he reads.  Be it Print or Digital or any other medium, Readers, viewers or users will be willing to pay, provided the free rides stop.”

Innovation is the key, Kumar suggest, “People in the Print Dailies must have Deep pockets in order to be able to fight competition and grow while establishing their brand.  Acquiring a critical mass for your brand is no mean task and one has to constantly innovate, improve and deliver on their brand promises.  The rest will die out, sooner than later.  This is the bitter truth.”