Siju Prabhakaran, EVP & Cluster Head  – South Business, ZEEL in this two-part deep-dive Leaderspeak interview talks openly about how about Zee Thirai has been doing, the content-pull that brought back viewers post the implementation of NTO 1.0, general economy slowdown, and all about the movie channel that’s doing supremely well for the South Cluster of Zee.

Read on for a lot of detailed insights.

What is your take on the TV Entertainment landscape in South India and what has been the Impact of NTO 2.0

It’s almost going to be a year since NTO 1.0 got implemented and all the ZEE channels from
south perspective have a great off-take from the consumers. I think the good part was that we priced our channels to be consumer-friendly and the pool of the content across these markets ensure that we are a part of most of the popular packs within the DPOs.

If in one or two cases we were not a part, we saw that the consumption for ala-carte was there because of the pricing of the channel. People were willing to subscribe for example, in certain DPOs Zee Tamil was not a part of the pack. I think it’s because of the sheer power of the decision being in the consumers’ hand we saw that the consumer is willing to subscribe. And that is where the whole sense of empowerment comes in.

Though at an overall industry level there might have been certain drop in reach and all of that but in most of the Southern markets, we see that reach of channels have come back to the pre-NTO days, which mean most of the TV reach itself is at the same level as it was pre-NTO.

Consumptions in terms of time spent are also something which we see going back to the levels which were before NTO. Particularly to ZEE channels and in general also all the popular channels are coming back to pre-NTO days.

NTO 2.0 is still work in progress, let’s wait and watch. 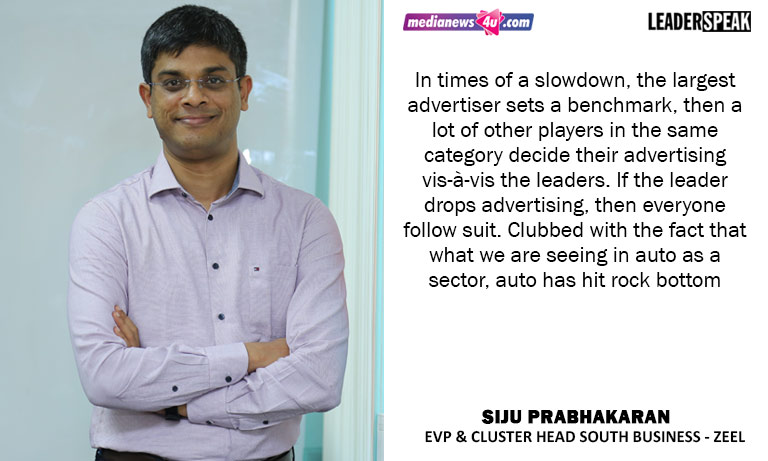 What was the impact of NTO on Advertising rates?

Ad rates itself has not had any impact, but the general slowdown in the industry has had an impact, which is across the industry. It is not connected to NTO and I think the fact that there is a general slowdown across sectors and that impacting TV advertising is something which we are witnessing as we speak.

Which is the one sector which is letting down TV the most in terms of advertising revenues?

See this is a cocktail of things, it is not like this one moment or one industry. In times of a slowdown, the largest advertiser sets a benchmark, then a lot of other category players in the same category decide their advertising vis-à-vis the leaders. If the leader drops advertising, then everyone follow suit. Clubbed with the fact that what we are seeing in auto as a sector, auto has hit rock bottom.

In the retail sector, while I think there still is some buoyancy, but it’s very sentiment driven. So they have a very different sense than maybe the matrix of what is happening.

Having said this, this is also a time for broadcasters to show the real value of what a large network legacy can bring in anything, there is a lot of partnership that we as a network are looking at this point of time. And I really hope that the worst is behind us and in the coming quarters, we will see some sunlight. Zee happens to be the most prolific Broadcast Network in the South, Could you take us through each of South Market’s growth story?

If ZEE has a particular network share, South as a cluster contributes the highest viewership to that overall network viewership share with the existing set of five channels that we have.

Having said that, there is tremendous growth opportunity which we have for South as a cluster because we only have five chapters, but if we have vacant spaces which we have not yet figured from a portfolio perspective. The existing channels we have had a great run in the last two to three years and it has been a journey where it is ZEE Kannada, which has moved to a very strong number one today on the back of some really cutting edge content.

ZEE Tamil in the last three odd years has a great journey, from what market share we have to what we are. We’ve been able to really push the envelope in terms of what sort of content we have been creating.

Zee Telugu has always been a very strong number one player and Kerala was a market which we had to fulfill and it is the fastest-growing regional channel which was launched during that time because there were some four or five regional channels along with Sony Marathi, Colors Tamil etc. Zee Keralam has been able to breach the 10% share and is touching 240-250 GRPs and really building the confidence of the advertisers. This is where we are and that’s a continuous game now that we need to increase our shares and cater to our consumers.

Movies are the second-highest consumed genre after GECs and very interestingly movies as a genre’s consumption has gone up from last year to this year,in both Tamil and in Kannada.

This has a multitude of reasons; one the sheer supply of movies in the market has increased the sheer number of releases have increased. The theatrical window that these movies get is shrinking.

The time span by in which these movies. People are more willing to sit at the comfort of their living rooms and watch these movies, because going out and watching has its own challenges. Audiences are changing in terms of their choices of what sort of content they want. So it’s a myriad reasons which is we felt this is the right time and a category which is growing. We have some catching up to do in terms of our viewership share. We had built a very strong library in the last four to five years in these markets and we thought we should launch Zee Thirai. 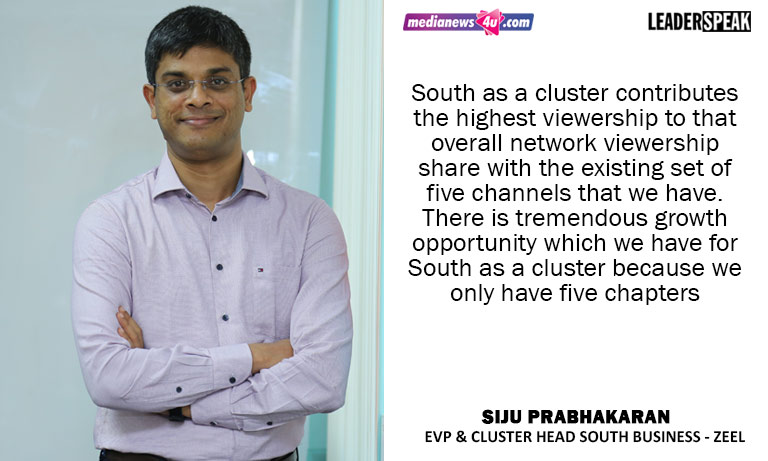 What is the movie library strength of Zee Tamil and Zee Kannada?

We have around 400 plus movie library. But it’s a continuous process, we will keep investing
in these markets, Kannada is also around 350 to 400 or so.

We are relatively new in terms of our acquisition. But the more important thing is that our average library age is very much new in comparison to some of the other players. We are a new channel and our acquisition has been in the last few years. What one also picks up is that viewers are more interested in watching newer movies when it comes to television.

We would invest in both star-driven mass movies and the same time we will also invest in content-driven movies, be it big or small but it will be a mix of it. We are seeing that audience tastes are changing. In the Hindi market in the last year movies are more content driven which get into the top 10 movies or top 15 boys. This is this good time for content creators in that sense some of it gets picked up by OTT players, some of it by satellite players and I think viewers is definitely having a real good content choice, when it comes to films.

You have a 400 movie library which is absolutely young. What are the other strategies you have to compete with competitors with a massive movie library of 4000 to 5000 plus movies?

We have realized is that actually it is that the size of the library definitely matters but it is also the science of understanding audiences, which makes us a little more stronger in what we have set out to do so there are movies which might have done well in theaters but don’t do well on TV, there are movies which might not have done well in theatres but do extremely well on TV. The TV viewing audience is a very different mindset audience and our understanding of this audience to thought our GEC channels is something which we are hopeful that we will be able to capitalize on. Obviously, the regular stuff such as scheduling and innovations with the brand are also important. I think the big difference is that today when viewers look at a movie space, they have an emotional attachment with movies as a genre. Some movie references are always there which have an emotional connect. And from that deep insight is where we came up with this whole brand proposition that “Rathathil Kalandhadhu Cinema” which means “Cinema is in Our Blood”

But at the same time, if you have to see what is there around us from a TV space, it is a little more commoditized as a genre from what is there currently. I think our ability to differentiate this and look at this genre more from an emotional need for our viewers is something that will make us very strong, sharp and very differentiated as an offering. I say this for both Tamil and Karnataka. We would want to keep that as the USP of what we are doing in our acquisitions, scheduling, promotions, our stand for the brand, everything will have this core emotion of what movie stands for the common audience at the centerpiece.