East Asian 5G rollout might not be over, yet Japan’s 6G race has already begun – Dataxis

On August 23rd, Japanese mobile operator Softbank announced its plan for a future 6G rollout. Said to be 100 times faster than 5G, 6G is expected for 2030 and is a technology for the 2030s,’ as Ryuji Wakikawa, Vice President and Head of the Advanced Technology Division at SoftBank states.

This anticipation comes as an unexpected head start, as Japan only began its 5G rollout beginning of 2020. At Q121, 5G had a penetration rate of 3% among mobile subscribers, which is relatively low in comparison to most advanced countries in the regions. Of course, this rush could be explained by the fact that connectivity improvements will enable new technological and industrial applications such as safety in traffic or even medicine and will be a major boost for Japan’s international competitiveness. But what really is at stake is most probably Chinese competition. Indeed, China had an incredible start in its own race to 5G, which currently holds a penetration rate of more than 25%, thus being one of the leading countries worldwide in terms of 5G consumer deployment. Moreover, it currently owns more than 40% of base stations, where Japan’s share revolves around 5%. In the future, China plans on carrying on with its technological expansion and the National People’s Congress’ 5-year plan unveiled in March paves the way for 6G development. 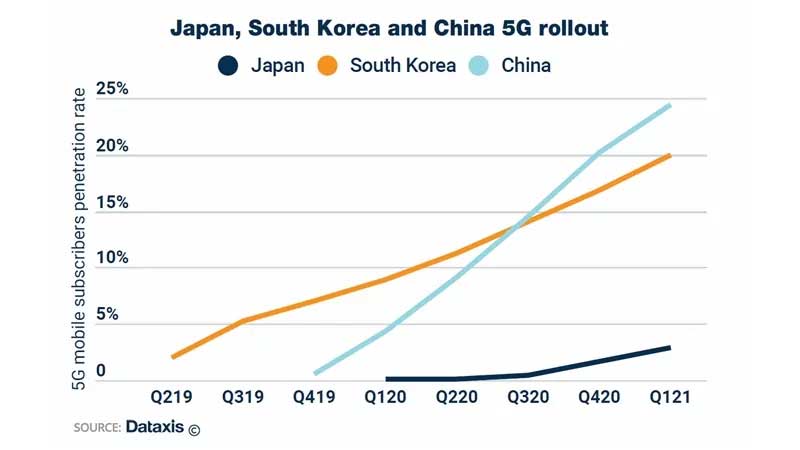 To avoid repeating the same mistakes, the Japanese government and telecommunication companies are betting on a steady strategy: international partnerships. First with Finland: back in June, both countries signed a MoU (Memorandum of Understanding) to conduct common research on 6G in both industrial and educational fields. Second, the US, which is also relatively behind in terms of 5G networks rollout and shares safety concerns over China’s leadership on the telecommunication market. Last April, a $4.5 billion Japanese American shared investment for the development of 6G was announced. Their common research interest: Open Radio Access Network (Open RAN), which enables multiple vendors to use the same base stations without risks of non-compatibility, thus allowing multiple partnerships as well as drastic decreases in building investment costs. Open RAN development could also mean for Japan and the US the end of their imposed choice between Chinese hardware vendors and European or Korean ones (which are very expensive) to operate their networks.

To maintain security as well as competitiveness, Japan and the US plan on leading the way by promoting their future technological advance in less developed countries, which is reminiscent of the 2019 Palau Submarine Cable Project, the biggest undersea infrastructure project led by Australia, the US and… Japan. This gives a good indication of Japanese weight’s sufficiency to lead innovation in other Asian markets, especially in China whose retail market represents an enormous economic opportunity for Japan.

The Mavericks wins the PR mandate for Hero Lectro

Following a competitive multi-agency pitch, The Mavericks India, a reputation management advisory firm, today announced that it has won the...

WATConsult celebrates its 15th Anniversary with the launch of NFT