From being a pure comedy channel, Sony SAB has evolved into a light-hearted channel that represents hope and happiness: Vaishali Sharma, Sony SAB

The Covid-19 pandemic has forced upon some major changes in the lifestyle of consumers, there has been a spike in the consumption of OTT platforms and digital content overall.

During the lockdown, when shoots were stopped and there was no fresh content on television, Sony SAB brought back some of its classic shows on TV like Office Office, Badi Door Se Aaye Hain, Partners, Jijaji Chhat Per Hain, along with re-runs of current programming. Additionally, Sony SAB launched a short-format show Kuch Smile Ho Jayein with Alia, where hosts Anusha Mishra and Balraj Syal invited prominent personalities and gave them exciting tasks from their homes in order to entertain the audience with their hilarious antics during the lockdown.

With the shoots resuming from July 13, Sony SAB started promotions for its new show Tera Yaar Hoon Main and launched the show in August end. For the same, Sony SAB associated with Varun Dhawan who shot a TVC highlighting his bond with his father David Dhawan.

Vaishali Sharma, Head – Marketing & Communications, Sony SAB in an exclusive chat with Medianews4U talks about the challenges during the lockdown, innovation in programming, launching of new shows and innovative way of promoting the shows.

The pandemic was tough during the lockdown, how did you keep your spirits & your team’s spirit up?

I think this pandemic is the biggest crisis that we all faced. As a team leader, it was my responsibility to keep my team motivated, speaking to them, both individually and on a team level. I was constantly on the call with them, checking how they were doing, continually asking each one of them how they were adapting to it and if there was any concern, immediately addressing it while giving them a lot of positivity and hope.

I think that any form of adversity or challenge is, in one way, an opportunity as human beings for us to rise above the occasion. When we deal with challenges with a spirit of courage, togetherness and unity, then there is nothing we cannot achieve. That is precisely how sticking together helped the entire team and uplifted everybody’s spirit. We hold daily calls, sometimes twice a day too with the teams and individuals. So, I think it immensely helped us to maintain communication, concern and care, therefore bringing out the creative energy of everyone in the team. I call it the four Cs of the pandemic – Communication, Care, Concern and Creative Energy. 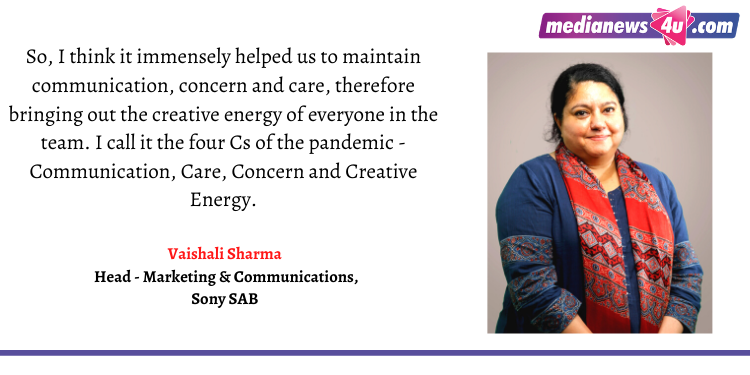 Post the lockdown, Sony SAB launched ‘TeraYaarHoon Main’ with an innovative promo with Varun Dhawan and his father. What was the idea behind this?

Innovation is key to everything we do especially during the new show launches. Our constant endeavour is to present an idea in a way that helps people relate to it better, and the concept becomes more relevant for them. Tera Yaar Hoon Main is a beautiful show that focuses on a father and son relationship and displays how during teenage years, all sons seem to think that fathers don’t understand them but how a new age modern contemporary father is making an effort to become his friend. Hence, we thought, Varun Dhawan and his father, who share a beautiful relationship and along with Varun’s immense following amongst the youth blends perfectly with the concept of the show, while reaching our target audience correctly. 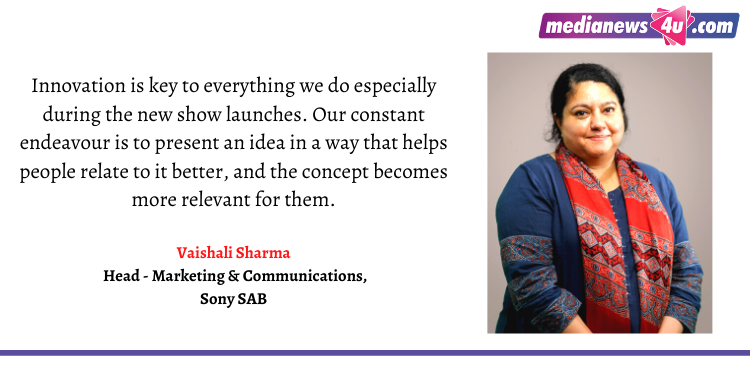 It worked beautifully for us in terms of creative relevance, since emotionally, Varun was able to reach out and express how his relationship with his father was so beautiful and that the friendship between them helps him so much in his life. I think that is how we expected it to reach our desired audience.

In mid-November, you launched, ‘Kaatelal & Sons’ and again followed it up with a music video, your thoughts on this?

Through our programming, we have always sought to spread happiness and positivity around. As a part of our promotional activities ahead of the show launch, we used the power of music to spread this thought of ‘Sapno Ka Koi Gender Nahi Hota.’ The campaign featured a video that challenged the deep-rooted gender stereotypes with a message ‘Khol Dimaag Ka Shutter’. We are delighted that the message landed perfectly with our audience. 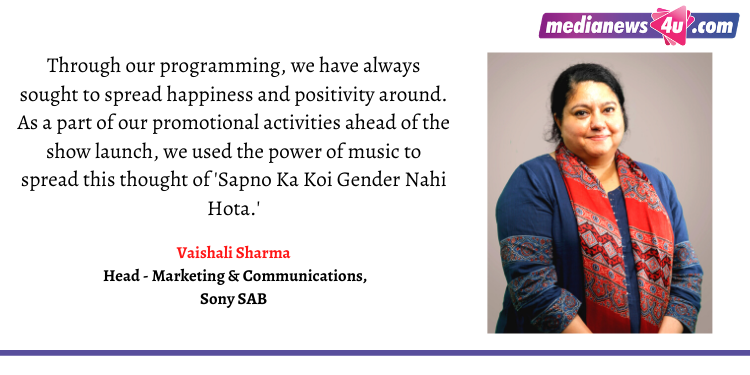 Now you are ready to launch ‘Hero- Gayab Mode On’, again a very modern hi-tech promo?

The show’s storyline promises to engage the audience. It is set in contemporary Mumbai and is a story of the journey of an ordinary man turning into something extraordinary. From a show perspective, it introduces the elements of evil in a very contemporary manner, which is through aliens. The subject has been treated very differently in Hero: Gayab Mode On. It has a fair sense of emotion, sense of life, along with the drama of conflict of good and evil.

We wanted the promo to showcase the largeness and the magnitude of the show which is not solely in terms of the scale of what we are going to show with technology and VFX but also the emotions. Hence, we have put in a lot of effort to ensure that the promo perfectly promises all the grand elements that the show brings. 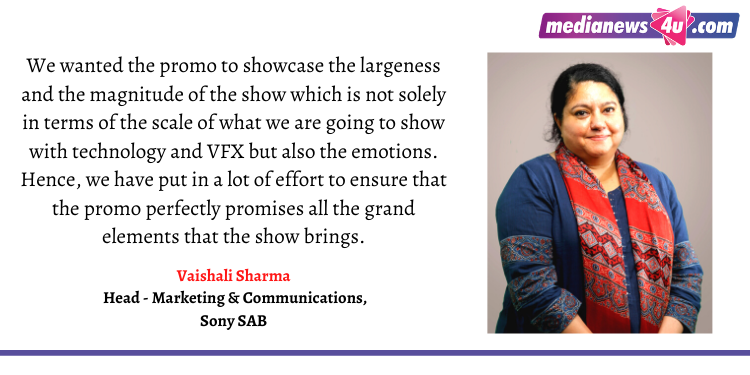 Sony SAB has spread cheer and laughter, now you are slowly shifting towards other genres, any reasons?

The best word to describe our journey in the past three and half year is – ‘evolutionary’. From being a pure comedy channel, we have evolved into a light-hearted channel that represents hope and happiness with relevant characters and storylines that keep everyone engaged. So, as part of that, we began to stem out and look at genres that went through the light-hearted funnel. From historical to fantasy and dramedy, we are exploring a lot. As long as it is with the brand core of light-hearted content that gives you hope and happiness, I think it is a great opportunity to explore new opportunities and areas that help us bring many more stories that are interesting to our viewers. 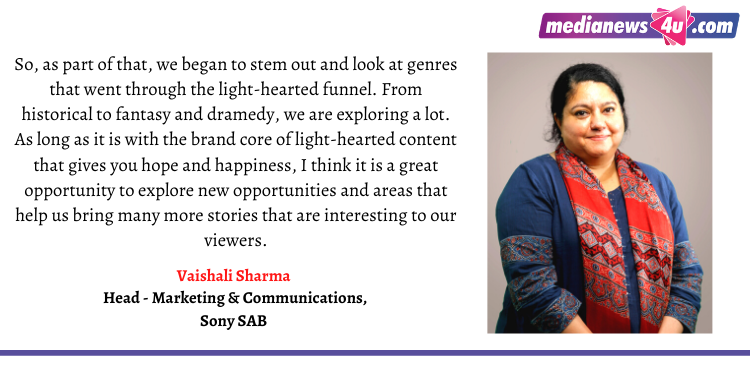 There was no new content for many months, how did the channel reinvent itself during the lockdown as viewers were shifting to OTT?

I don’t think that everybody has shifted to OTT. Needless to say, there was a significant number of people who, for a few months, acquired the OTT habit as well. However, data has shown that television viewing has only gone up during that time, and Sony SAB was at its peak during the pandemic. This year, we drew a lot of viewership purely on the basis that people like coming back to our channel for the kind of content we have – it’s something that our audience enjoy watching again and again. The type of stories and the characters that Sony SAB has, keep the viewer’s continuously engaged. So, we saw a lot of viewers come to us during that time as well. 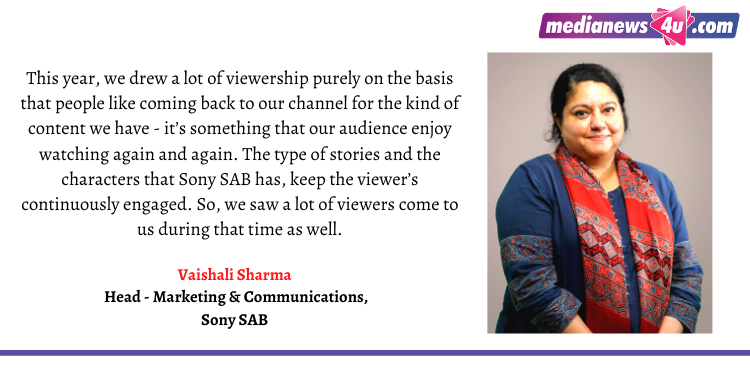 Well, we have already launched some exciting shows such as Kaatela l& Sons, which is a very progressive and forward-looking show that shows women in such a wonderful manner. These are young girls who are not deterred by the situation and challenges but move on expressing themselves, their work and dreams. So it’s an interesting show where you are giving people and youth a lot of hope and a fresh perspective of looking at life. Similarly, Tera Yaar Hoon Main is a story of father-son friendship. I can keep talking about these shows, but with a brand like Sony SAB, viewers can continue to expect fascinating storylines, some which will have a lot of fun, some which will have a lot of depth but in all, light-hearted content that gives you hope and happiness. 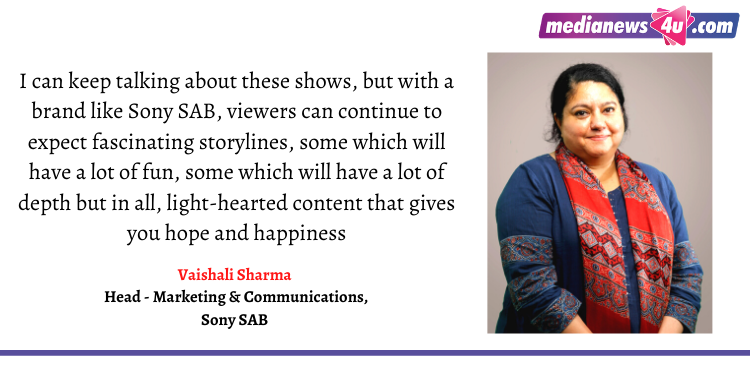 Mumbai: Bennett Coleman & Company Ltd. (BCCL) is a subscriber of viewership data from Broadcast Audience Research Council (BARC), for its...