Health and Fitness Activity on Mobile Skyrockets in 2020: Installs Up 67% Due to COVID-19 Lockdowns

Bangalore: As gyms and fitness studios closed during COVID-19 lockdowns, consumers have increasingly relied on health and fitness apps to help them stay healthy and maintain fitness routines from home. New data from app marketing platform Adjust shows that in addition to the New Year’s resolution trend of increased installs in early January, COVID-19 lockdowns drew users to health and fitness apps even more, upending the traditional fading of New Years’ resolutions. 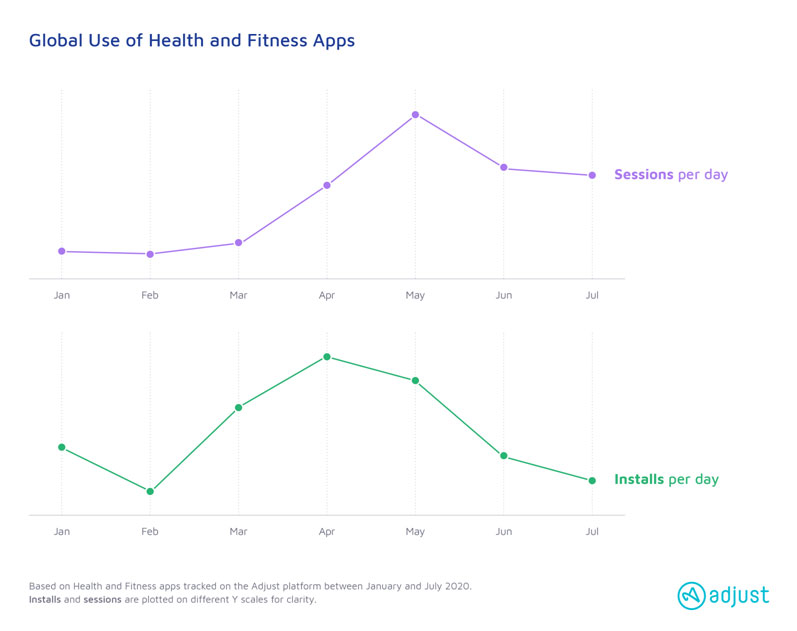 WOFH (Working Out From Home)

The data shows that daily installs of health and fitness apps across the globe grew progressively throughout March, rising 67% above the 2020 average install rate at the end of March and beginning of April. Sessions, however, didn’t see significant growth until May, indicating that while installs may have accelerated during COVID-19 lockdowns, uptake in using those apps took time to catch on.

Adjust’s data shows that although Installs and sessions have started to decrease following their respective peaks, sessions are still trending far higher than in 2019. July installs are up 7% compared to 2019, and sessions have increased by 61%. This suggests not only are apps getting more of a workout, but their users are too.

Interestingly, Sunday is the day of the week when users are focusing most on getting into shape, Adjust finds. By Friday, weekend plans seem to sway users away from health and fitness apps. Sunday has the most sessions globally every week in 2020, while Fridays consistently see the lowest.

“The pandemic and ensuing lockdowns have led many consumers to re-prioritize their lifestyles and their day to day behaviors,” said Paul H. Müller, co-founder and CTO of Adjust.“Our data suggests that this is widely reflected in the health and fitness habits of consumers and points to a longer-lasting trend of people preferring to WOFH (workout from home) rather than going to the gym — especially as safety measures remain in place in many countries around the world.”

The data also provides insight into regional trends, showing a correlation between use of health and fitness apps as lockdowns were put in place and then gradually eased.

The United States saw an impressive increase in installs as lockdown restrictions came into place at the end of March, at 58% higher than the 2020 average. Consumers appear to have actively started using apps in May when daily sessions peaked at 25% above average. Daily sessions have slowly declined since, but July performed at 16% above average, suggesting many users are still highly engaged.

In the United Kingdom, April saw a huge spike of installs – averaging out at 93% higher than the overall 2020 average. Sessions also started increasing steadily from late March to late May, peaking on May 25th, at 80% above the 2020 average. Although sessions have slowly started to decline, July 2020 sessions were double that of 2019.

Brazil saw a significant increase in installs from the end of April through to mid-May, with the time period performing at 73% higher than the 2020 average. Sessions picked up shortly after installs, with the month of May increasing to 96% above the 2020 average.