I expect Gaana to double to 400 million users in the next 2 years: Prashan Agarwal

While International music streaming platforms such as Spotify and Amazon Prime Music may have a strong brand and recall value, Times Internet’s music streaming service has been built on the back of a strong user base.

Prashan Agarwal, CEO –Gaana in this candid conversation talks about their regional business, the Spotify effect, Gaana’squick update on the business performance. Being an angel investor himself, he highly values the startup culture of quick decision making over red-tapism.

How has your journey at Gaana?

It has been a fantastic journey at Gaana. My initial challenge was to turn around the business within the country’s largest digital products company and give it the legs of a startup in terms of speed of execution and agility in decision making. I’ve been able to build a strong team of senior leaders for core areas of the business and use the resources of Times Internet effectively to scale Gaana to be India’s No 1 music app.

Being an entrepreneur, what is that drives you on a daily basis?

As a serial entrepreneur, I enjoy building products & services that makes a real difference in the lives of millions, I believe an entrepreneur must singularly focus on figuring out a pain point in the user experience and solving it.

How has Gaana been performing? A Quick progress report in terms of subscriber user base vs add supported user base, active users, downloads, in-comparison with competition…

Gaana has grown over the last few years to be the No. 1 music app in India with more than 125 mn Monthly Active Users who stream more than 3.2 billion songs every month.

Has the entry of Spotify in India impacted Gaana in anyway? 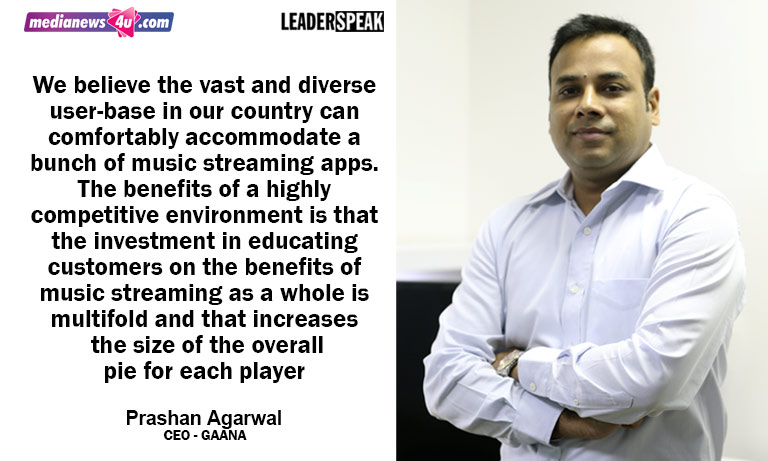 At Gaana, we believe the multitude of marketing investments from music streaming players will help grow the market at a quicker pace to more than 400 mn users over the next 2 years.

Which are the industry-first product innovations that Gaana has driven for consumer engagement?

We have brought several industry-first features to the market – be it making the app interface live in 12 languages, being the first music app to introduce in-app Voice assistant, introducing sing-along lyrics on the player page, curated video clips and lyrics cards. Our other two most significant additions are Smart Downloads, where the app will automatically download a premium user’s favorite tracks based on their listening history and Gaana Videos, an exclusive, vertical-video format that accompanies new & popular music.

What are some of the consumption trends you map for regional music?

Regional music forms a major part of music consumption habits of most Indians today, with Punjabi, Hindi, Tamil, Telugu and Malayalam ruling the charts. Regional music consumption on our platform has registered more than 25X growth in the last 2.5 years. This has lead us to believe that a deep understanding of the Indian music lover’s regional music tastes would be key to securing a considerable market share in our country’s audio OTT market. 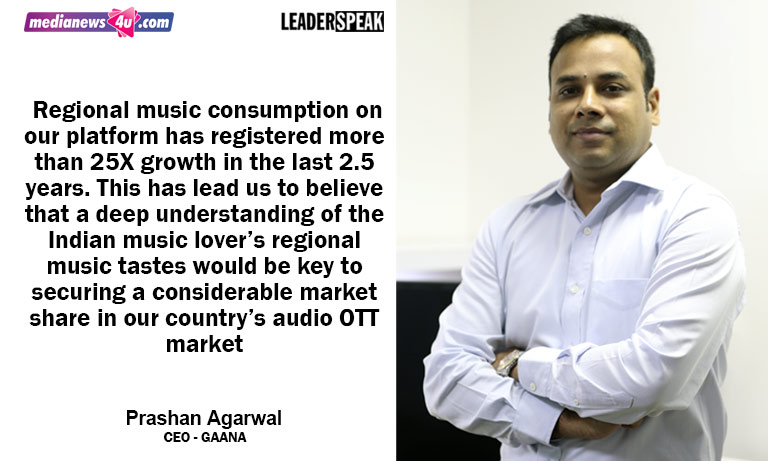 How is Gaana providing a platform for budding artists and artists who haven’t got Bollywood music to their credit?

We have a dedicated team working closely with music labels to identify emerging artists and offer them a platform to launch their albums at a similar scale as mainstream Bollywood songs under the Gaana Originals brand. Gaana Originals Season 2 was launched last year, and was a runaway hit with more than 220 Mn streams. We have recently launched Gaana Originals’ Love Editions and Punjabi Editions, and are confident they will be biggest turnaround stories for non-film music this year.

Which are some of the user-interface enhancements that the application has made in recent times?

At Gaana, we are obsessed about innovating in line with the evolving consumer demands. We have launched several industry-first steps in that regard, and in that regard, we recently became the first music app to launch an instant app experience that offers prospective users a taste of all major functionalities like searching for music, browsing and listening to songs to prospective users who want to experience the app without actually downloading it. 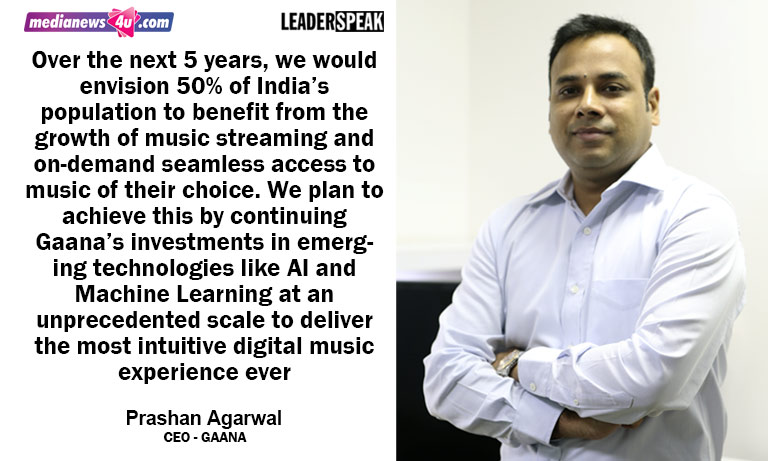 How was the advertiser response this festive season?

The festive period starting October has seen significant and contributed meaningfully to growth in Ad revenues. Broadly, consumer tech companies, fashion and lifestyle and online service providers are among the biggest spenders in the audio streaming space this festive season.

What is the way forward for Gaana?

Today Gaana is amongst one of the few successful homegrown pureplay consumer internet startups. The Indian music streaming industry has grown over 3X in the last two years, and is expected to more than double to 400 million users in the next 2 years. Our goal is to ensure Gaana continues to lead the way in the unprecedented growth in this sector and becomes a role model for companies building out content-based consumer internet businesses.

Over the next 5 years, we would envision 50% of India’s population to benefit from the growth of music streaming and on-demand seamless access to music of their choice. We plan to achieve this by continuing Gaana’s investments in emerging technologies like AI and Machine Learning at an unprecedented scale to deliver the most intuitive digital music experience ever.

Is there anything else that you would want to add? How do you define intuitive digital music experience?

As the market leader, we have already invested significantly in hiring advanced AI & Machine Learning engineers who have designed indigenous recommendation engines that help us offer the most personalised music experience to our users. Currently, more than 25% of the overall consumption is purely based on AI & machine-learning led recommendations, are we are hoping to double this in the coming year.

No money-trail between Hansa and Republic TV says Auditor

Mumbai: The phrase “money-trail” is generally used to describe illegal financial transaction between two parties. In a recent media briefing,...

What distinguishes us from other agencies is our agility and speed: Tejender Sharma, Art-E Mediatech