I genuinely call this re-imagining the song, and they have totally re-imagined the song: Gautam Talwar, MX Player

MX Player is all set to launch its big-ticket offering/ flagship offering, Times of Music – a one of its kind music reality show helmed by India’s finest musicians and their recreation of 22 iconic songs. Raising the bar of entertainment on the internet, this digital-first musical extravaganza brings viewers 20 legendary musicians on one common stage. Each episode will see a pair of two composers of different eras recreate each other’s songs, adding their signature twist to it. The show also sees Vishal Dadlani step into the role of the host, unwrapping interesting stories and some unheard chapters from their lives

Medianews4u spoke to Gautam Talwar, Chief Content Officer at MX Player, on this show. They have also recently launched another musical called “Sajda Karoon” Gautam says, “Sajda Karoon brings together some of the most celebrated names of the music industry and there was no better day to share it with everyone other than World Music Day. This anthem is a quick capsule of everything that the show stands for – music that is timeless, a stellar line up of India’s best talent and it salutes the power of music. This was our attempt to make a genuine ode to music itself and we’re sure it will strike a chord with the viewers. ”

During this lockdown and this crisis, how did you deal with it personally and professionally?

Personally I have been working 18 hours and you realise that it is much tougher to work at home and I will tell you the reason behind it, the entire team has worked much harder and they would not have worked this harder if they were at the office. As there is absolutely no area for entertainment available neither the cinemas, films nor the restaurants and now television content going completely blank, the only guys that have been really pushing it through and we have launched about six to seven shows in the 90 days period of lockdown that we had and we have seen absolutely phenomenal results. 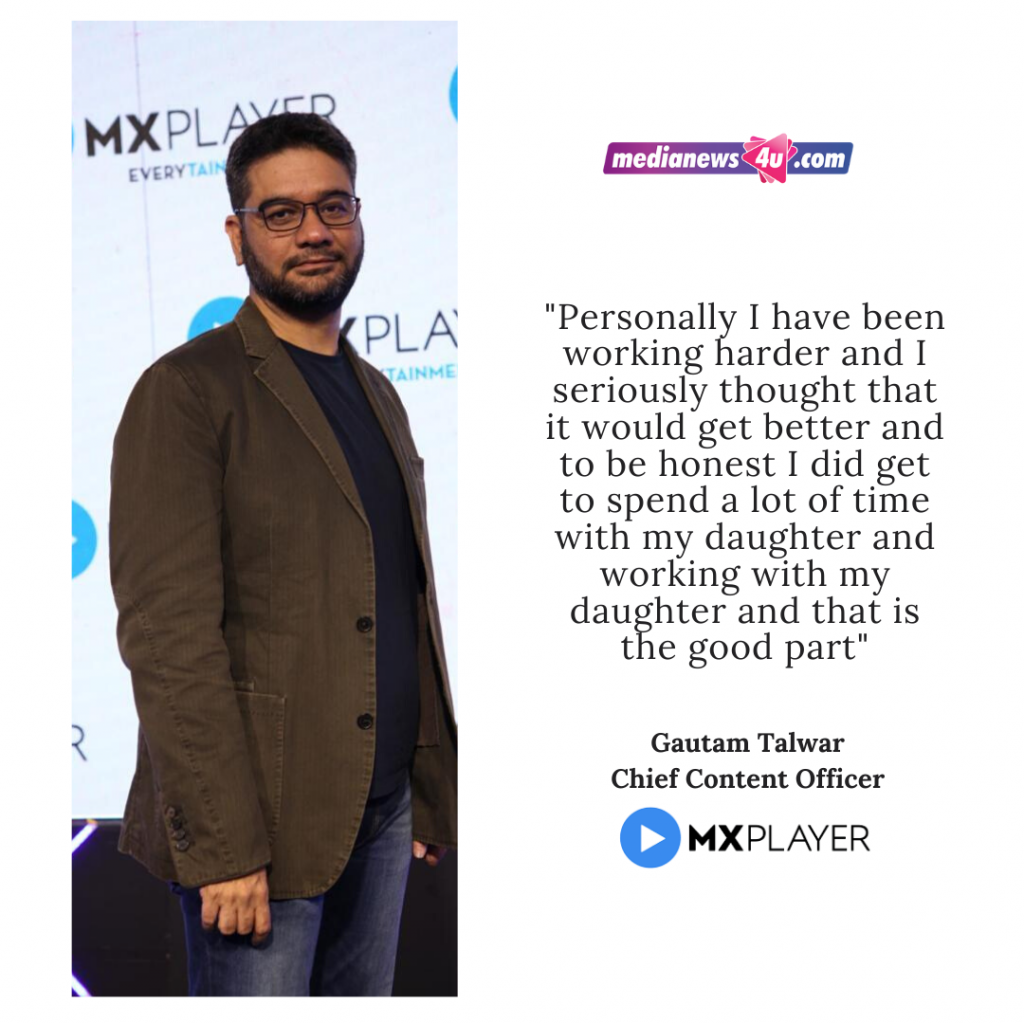 This show how did it come about and how was it conceptualized and to get such big names on one platform?

It has taken a long time and it was just a gem of an idea I had a long time back and then I met common minded people in my producers, vobble creators and Ram, we then took it forward and kept discussing and kept fine-tuning the idea. To be honest with you, this is something that is never been done anywhere in the world. Imagine Taylor Swift singing a Madonna song and vice-versa, it would be quite something and that is where this germ of an idea really came in. We started over with another idea we refined it and we came to this and said that it would not be possible as it would be a herculean task to get such big names on one platform and I think the core of the idea was fantastic and the show was also called ‘Then and Now’ saying that yesteryear musicians like Pyarelalji, Anandji Bhai, Anand – Milind, then pair them up with the new guys like Vishal – Shekhar, Mithun etc.

I do not think Pyarelalji has ever in his career has sung anybody else’s song, he actually did a track for Salim-Suleiman, ‘Shukran Allah.’ Of course, Salim-Suleiman were thrilled and they did a fantastic version of ‘Mere Mehboob’. I think it is outstanding just to see what they have done and when you look at all the 22 songs, each one of them is fantastic. Eventually in bad language is called a remix, but this no remix. I genuinely call this re-imagining the song, and they have totally re-imagined the song and it is not even close to banging music, if you see what others have done in the song it is absolutely fabulous.

You have a plethora of great names in the music industry how did the final product come through, and now it is going to be coming on screen?

To be honest with you it took a long time because we wanted to give a free hand to these guys to do what they like to do and they all said in the press conference, that they enjoyed the most was the fact that they got the freedom to create the songs, the way they wanted to and I think that is what actually drew them in. For everyone it was actually a passion project, to be honest with you, it is an out and out passion project and what was great about is that they came with equal passion, whether it was the singers or the composers. They chose a song with us and we sat together and we figured out a lot of songs, what we could do and could not do. Big names like Pyarelalji and Anandji also contributed their best, from can I do something with the song, and can I put my own touch in it, that whole exercise took a very long time. 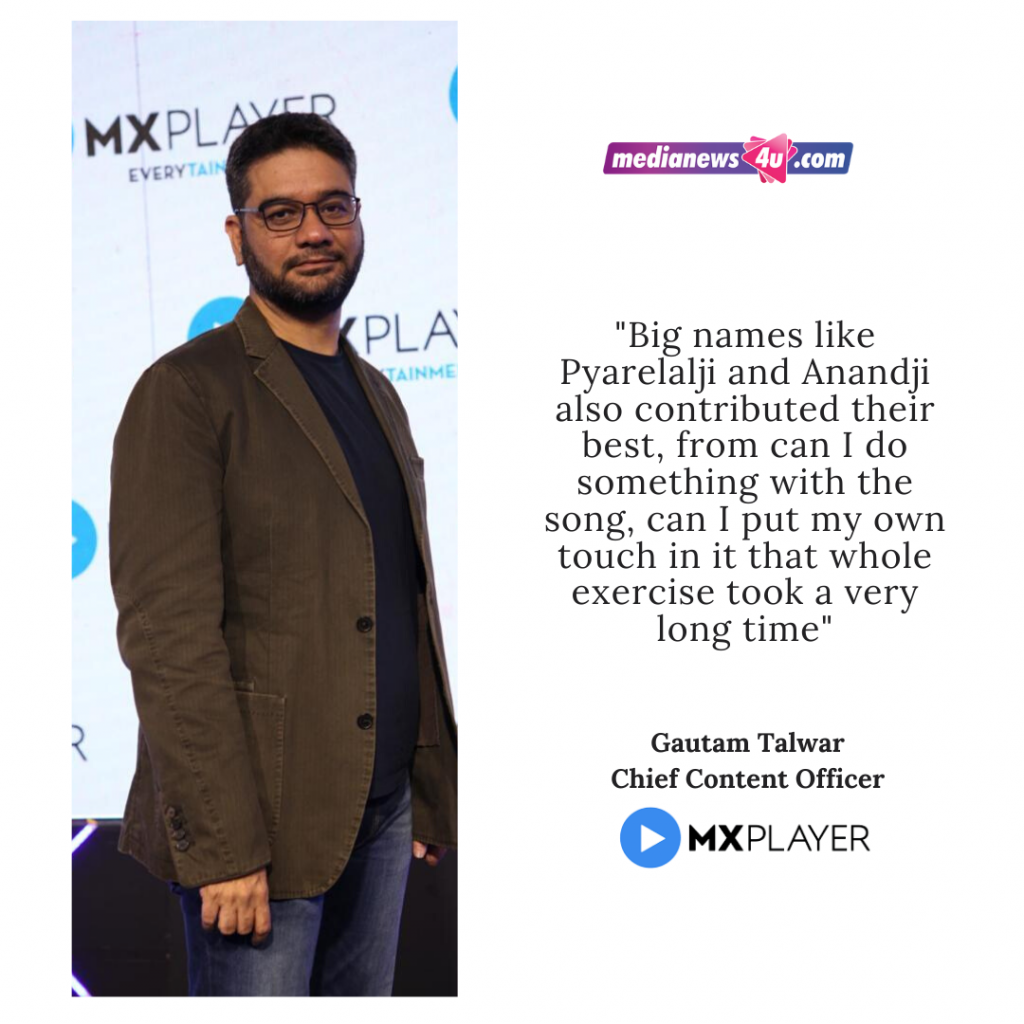 I have to give credit to Vishal Dadlani, he is so awesome, as the choice of the anchor was so critical. We could have got a television personality or a film personality to anchor the show but we were very clear that this show is for musicians, by musicians. The fact that Vishal is an all-rounder, a host, singer, musician and band member. The depth of knowledge he has is amazing and the great part is that he is friends with everybody, every single person who came on board is such a treat to watch. Working with Pyarelal, Bappi Lahri and Salim-Suleiman was a great experience and you will see it on the show. Once you see the show you will see it is very authentic, it is more like a ‘Coke Studio Format’ it is a show where you actually get to hear about songs, how they created songs a lot of trivia that people do not know will be revealed.

MX Player has launched nine shows during this lockdown, what are the other content in the pipeline?

We launched seven shows in lockdown and it was already shot, because post also takes about four to five months, so all of them had been shot before and everything was in different stages of post-production. Now due to COVID we have delayed quite a few shows as we could not complete some of them. As the industry is gearing up to start, hopefully we will come up with some three-four big ones very soon.

What are the lessons that you have learned during the crisis?

The big lesson is that do not take things for granted, I think we are so crippled right now, we have not shot for 90 days and everybody is trying to figure out how to get back to shooting, also to shoot shows with film quality requires a certain set of people on board.

The lesson to learn is making sure that when we go back when everything is completely safe, it is healthy for our actors, and we will follow all the protocols by the government and with the producers. The biggest lesson is what you got to do because you do not know when things will shut down again. My message to the Millennial’s would be listen to some music that has been created by us and stay positive and care about the environment because nature is telling you to stop and respect the environment.

SoCheers collaborates with MindPeers to strengthen its employees’ mental health

Mumbai: SoCheers joins hands with the MindPeers, adding renewed efforts, yet again, to effectively and strengthen its employees' mental health....