DTamil, a leading regional player in the real-life entertainment space is at an interesting inflection point today. Since its growth and expansion in September 2019, the channel has grown tremendously thanks to its differentiated and vast content library.

In conversation with Megha Tata Managing Director – South Asia, Discovery Communications India,  she talks about the rebranding, differentiated content, and much more…

Rebranding of DTamil, and the thought behind this lovely vibrant logo?

We had gone through a refresh of DTamil in September 2019; we also focused our energies in driving that proposition further in that market. We did a few content curation changes on the platform to create a distinctive offering to the Tamil audiences.

Over a period of time we created a much-differentiated offering to DTamil audiences which was unlike the offering on Discovery or Animal Planet or TLC, this offering was catered for that market especially. We got a decent outcome out of this; the audiences liked what we were offering, the promos, communications were also localized. 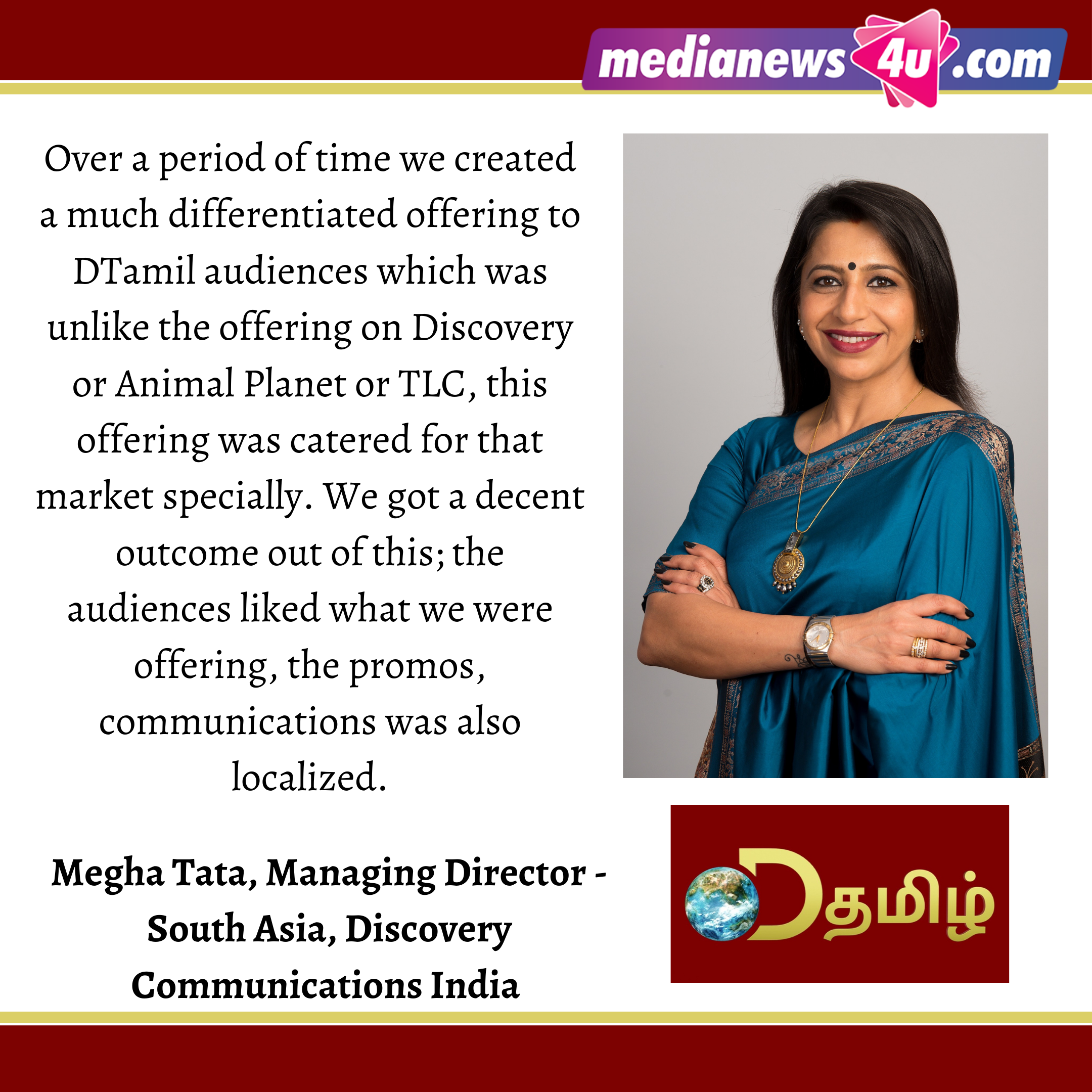 Now the DTamil refresh is to create more action, excitement for the brand so we decided to rebrand the logo. The name DTamil remains the same fundamentally we added more color which resonates to the market. The new logo is in Red and Gold, it is more celebrity, more alive and entertaining.  The new logo represents all this in our new idents, promotions, and communication which will revolve around this color palette.

The channel is also to launch 2 new shows the idea and strategy to launch an adventure reality and a cooking show?

On the launch of the logo we decided to launch 2 new shows, they are acquired shows and very interesting. Both these shows were launched over the weekend. The first one AchamYenbathuMadamaiyada is packed with excitement, anticipation, and definitely raw emotions. The show is anchored by Gunalan Morgan. Twelve contestants will live on an island for 15 days while competing in physically and mentally challenging tasks against each other to win the title and grand prize money!

The second is a cooking show, and we realized that the kind of content that is working in that market is a lot of cooking-based shows. SUVAI is a light-hearted family cooking competition. Suvai is here to tantalize the taste buds and leave our audience eager to cook up a storm in their kitchens. With 12 couples vying to be the season’s grand champion, this season is going to be an epic battle of tastes as the contestants continuously outdo each other to impress our resident Judge, Chef Bala, and the guest Judges. The show is hosted by Anandha Kannan.

This is content that resonates very well with our audiences and this is the first time we are trying something new in that space and that is what is very interesting about this change. 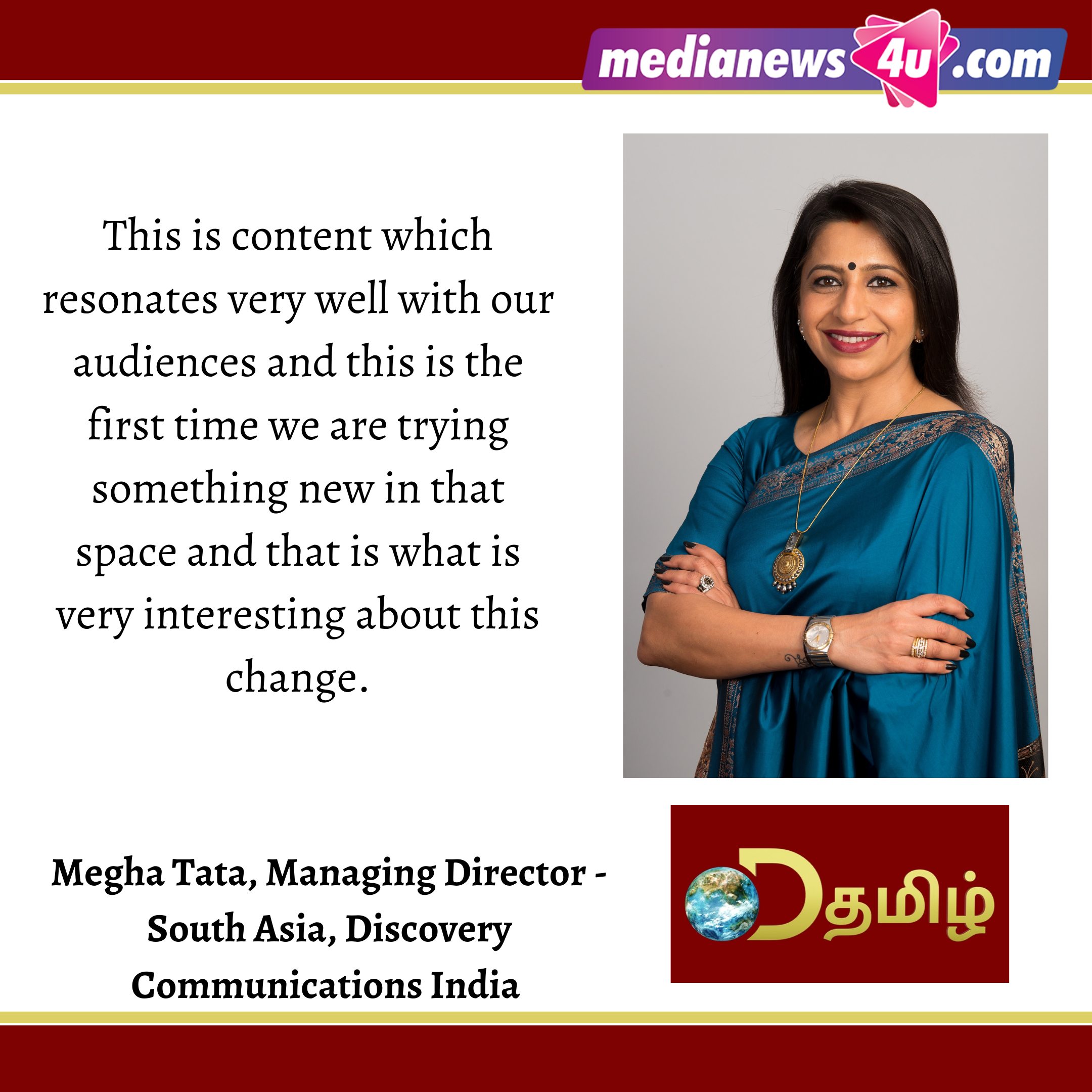 You are launching two new shows of different genres, how will this resonate with your audiences?

Actually based on the data some of our top-performing shows like Food Paradise, Chopped Junior, Kids Baking Championship, there are a lot of cooking shows which do very well in DTamil. That gave us confidence and also all these shows are international shows localized for DTamil, so we decided to bring a show in the language by the people of that fraternity and how that will resonate, this data gave us the confidence to bring in both the shows especially the cooking show, we feel that this will really resonate with the audiences and hopefully if it does succeed we intend to bring more seasons as well. 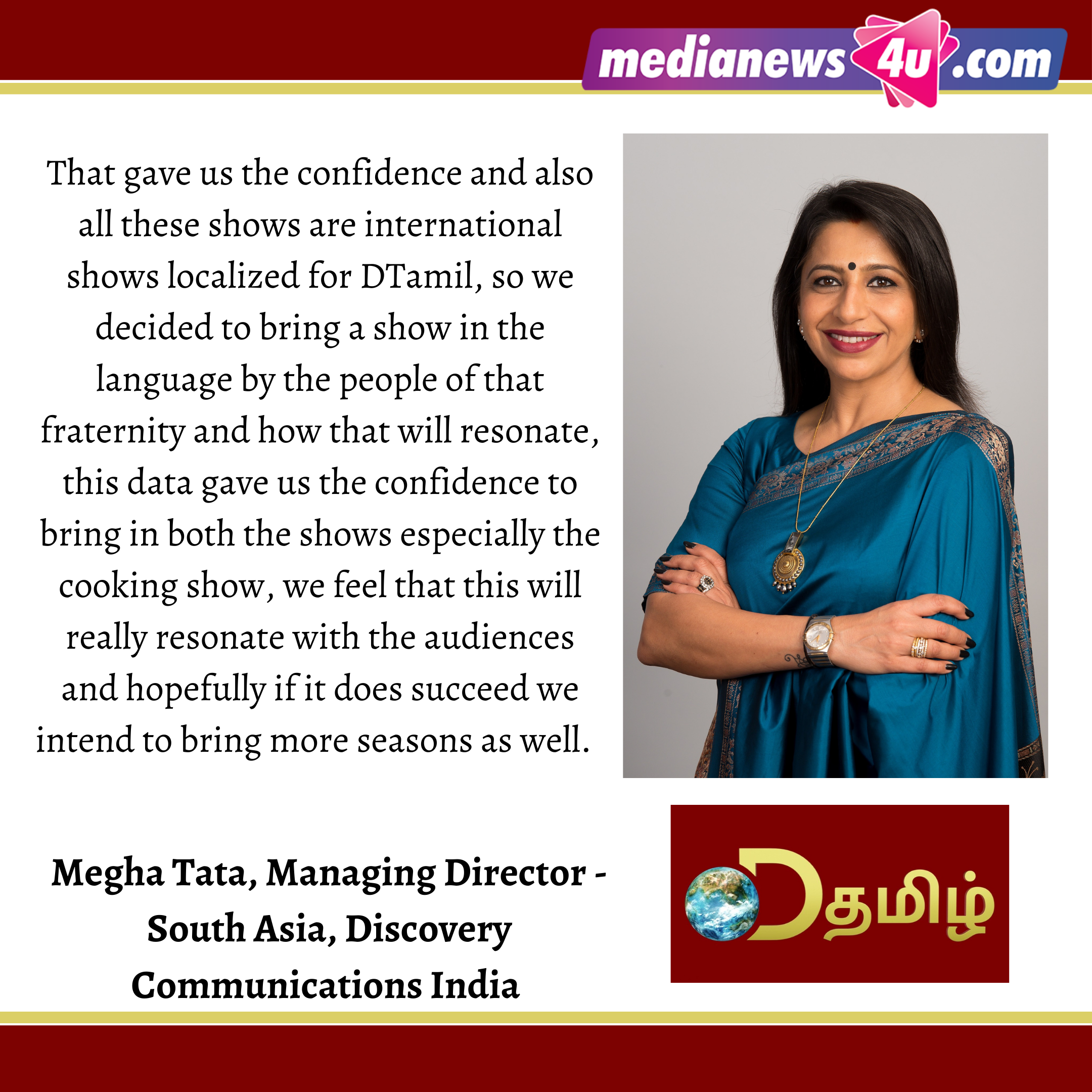 The market share of D Tamil, is it purely urban or you have penetrated into the tier 3&4 markets?

We actually have a very good growth story to be honest; DTamil has grown by 58% in the current period and our reach increased by nearly 30%. Clearly focussing on our product, localizing it and communicating it on the back of our localization strategy has paid dividends for us and that is where the growth has come from. It is a very competitive market and DTamil has a very distinctive offering and we are not a GEC but at the same time we are competing in that market and at the same time our audiences like the differentiated offerings. End of the day this differentiated content by DTamil stands out and we are now trying to see how we can add localization. 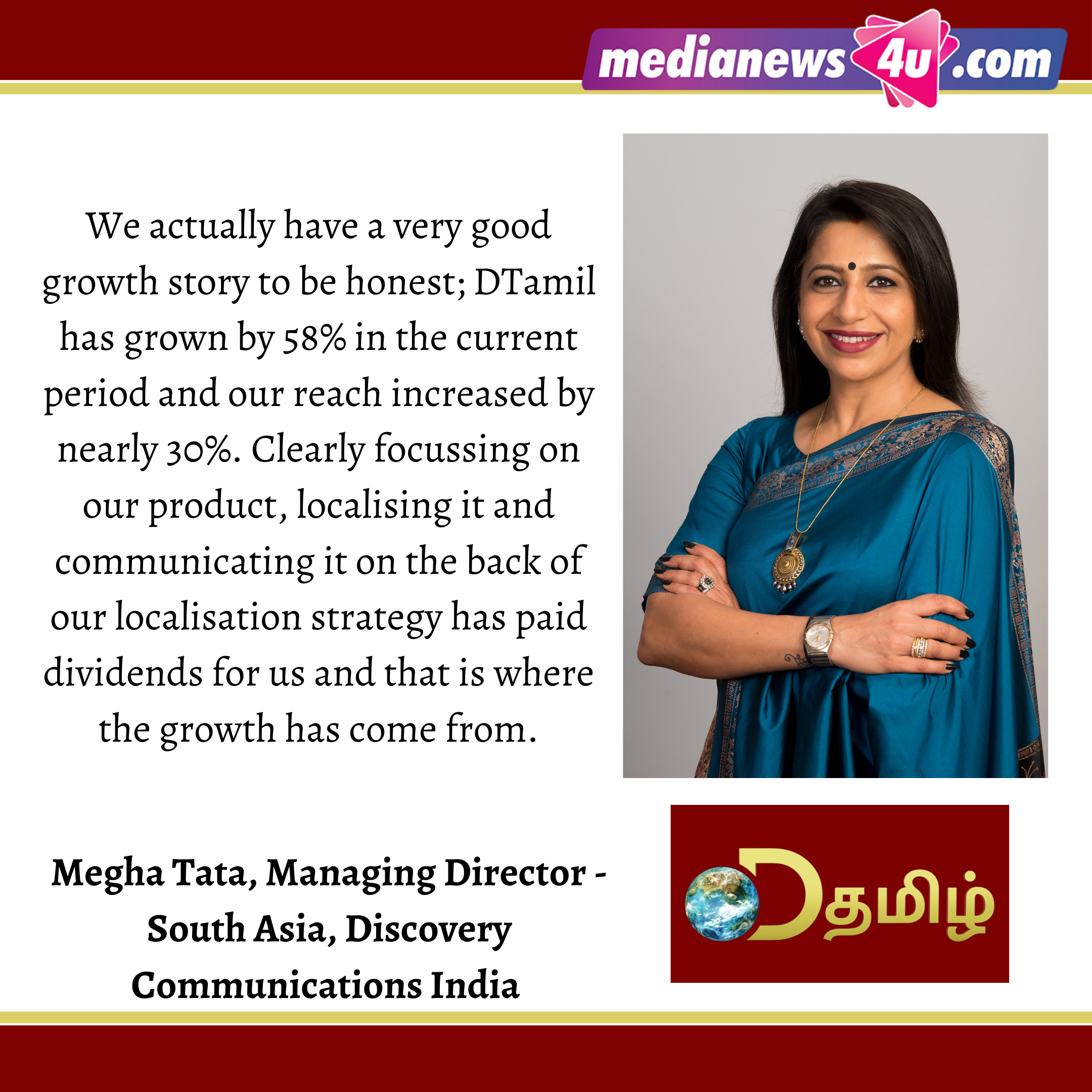 In fact when we did the refresh in September 2019 and we launched it on the back of an international show which we localized with celebrity talent. This content slate included the first local IP AsaaltaAlravidumPullingo: Fail Army in November 2019 featuring Tamil actor-comedian Karunakaran. This show did very well and we followed up with and the premiere of Into the Wild with Bear Grylls&Rajnikanth.  This show surpassed two major Tamil GEC channels (Colors Tamil & Jaya) and that has given us more confidence to try to invest more content in that market which is in the differentiated space.

How did the channel perform during the Pandemic?

It was a tough year for everybody and all the brands suffered from the revenue point of view but our performance had a great growth story which is true I think for most of the broadcasters. Discovery as a network and our portfolio had a huge growth as well, in fact Tamil grew by 22% when the Tamil GEC Genre actually grew by 4%, our reach increased by 25% when the genre increase was 2%, I think we outperformed the market but as the base is small so it’s like to like comparison, but with audiences sitting at home and watching, the ability to watch more content and this differentiated content offering played out well for us. 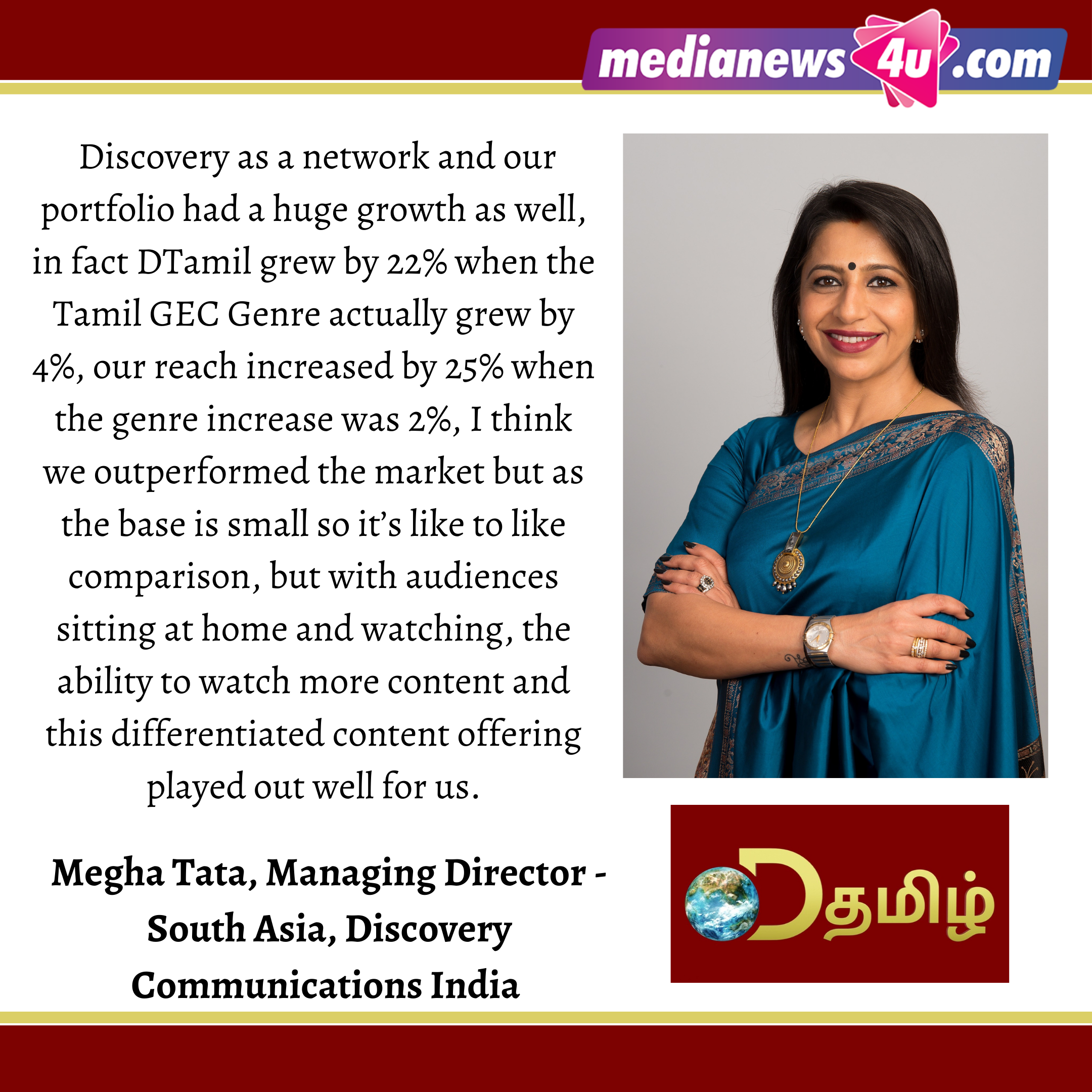 What has been the Advertisers response?

I think we have just done the rebranding and launched it on the Tamil New Year. We have had a pretty good response, our roster of advertisers has also grown over a period of time we had new 8-10 new advertisers who have come on the verge and in the back of the shows. We have clients like Kellogg’s, Asian paints, glance, citron, HUL, and a whole lot of other clients who are on board on the back of the shows which we curated over the last year. And in the back of this particular rebrand, we have got newer brands like Byju’s, Kia Motors, Colgate, and Asian Paints. It’s a good story for us and the preposition is resonating with our clients. We have had a good story on the retail client group from the time we launched the refresh and in fact earlier on it used to be less than 10% of the contribution which use to come from retail which is now grown to nearly 30%; right now of course because of elections and challenges on the ground, this quarter it’s a bit slow but I think with this refresh and new content coming on there is definitely good stories and we are quite excited and look forward to the conversations with the clients. 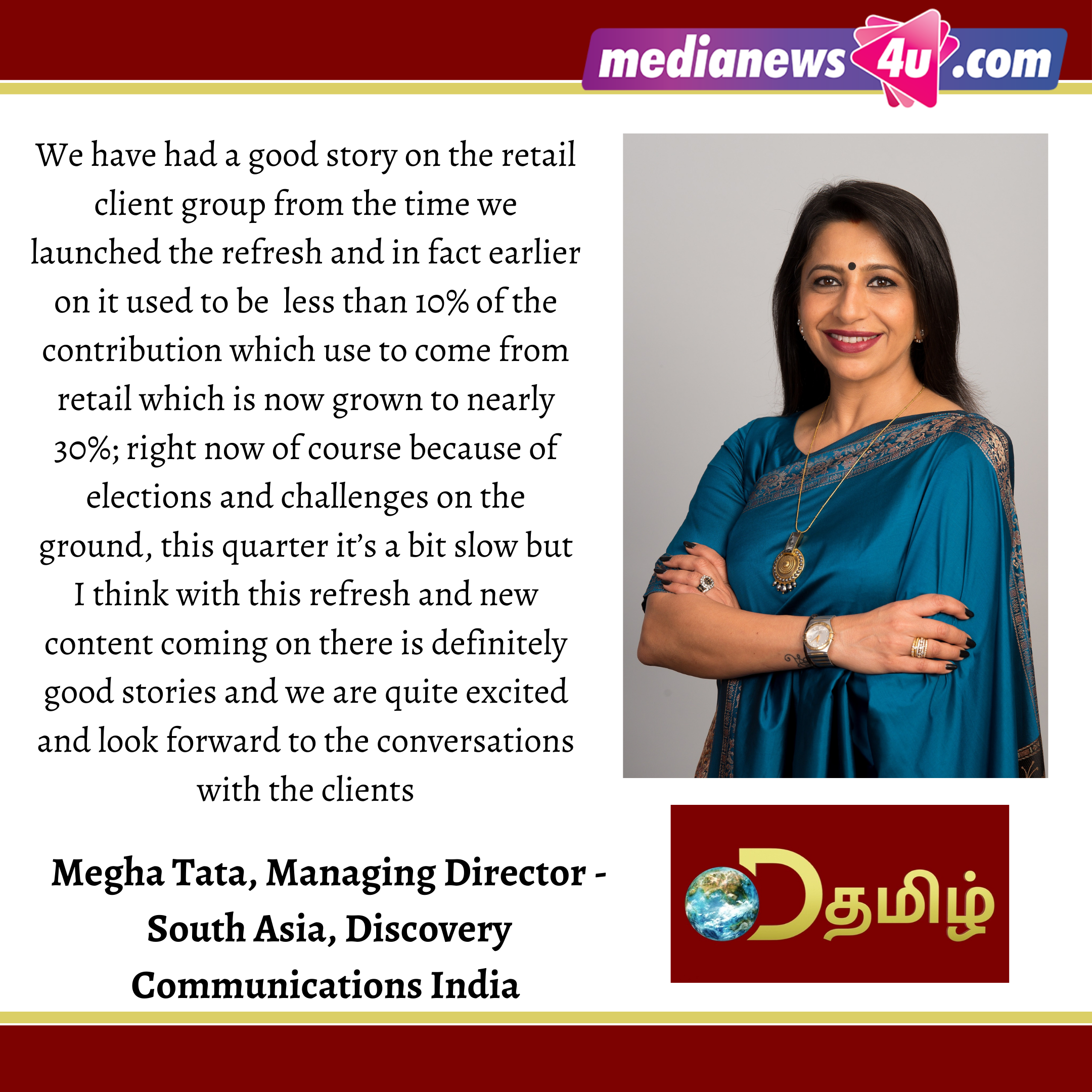 How do hyper-local advertisers look at DTamil?

Actually, HUL, for example, would focus on brands that are more relevant in the south market, the brand selections from these large national clients are very local driven so in that sense it is being brought and evaluated as a local preposition. saying it to be a national proposition. Also as our base is small and our preposition is very distinctive the clients are also seeing value in the support which we bring to them. We have launched a power-packed marketing campaign and we have the top Tamil actress Tamannaah Bhatia who has unveiled the brand new logo. In fact, the whole campaign is all about, whatever she touches turns into gold so it was a very interesting creative ambition. Tamannaah touches the DTamil logo and it turns into gold. It was nicely put together and has got great traction; the marketing campaign has just begun so there’s lots of action happening on that front from the local market and that is what clients appreciate the marketing support we are bringing to the table. Why did you feel that you needed to get a Celebrity to endorse the channel?

I think it’s just that you know sometimes adding a bit of glamour, to the refresh or rebrand creates a bit more resonance to the audiences and that’s what has worked for DTamil as well in the local market. In fact, DTamil logo was created and did what it had to do at that point but I think the logo needed a bit more drama, the market and the audiences we were dealing with appreciated that, I think that’s why we think getting Tamannaah was to add more drama to the channel. 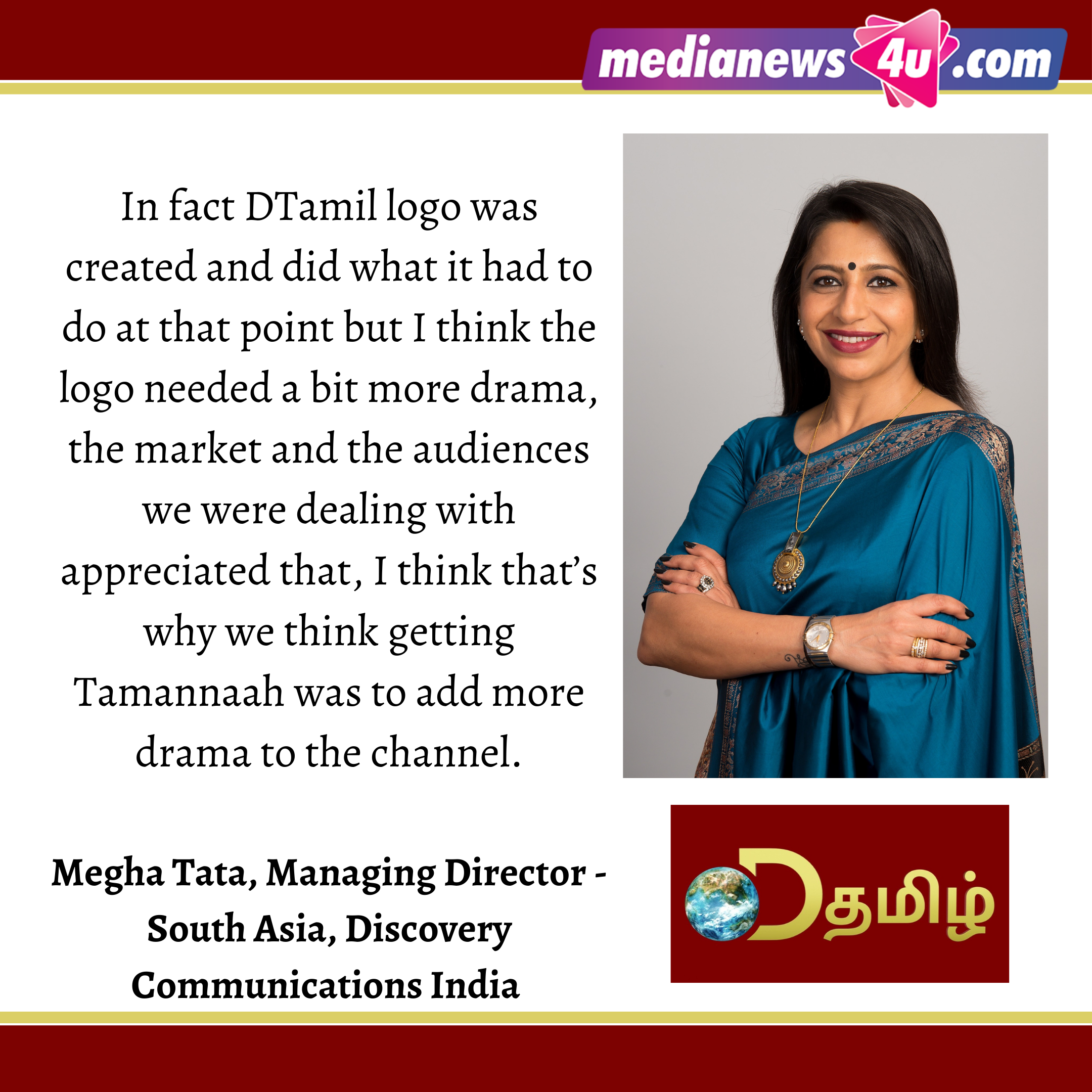 Mumbai: Indu Jain, the Chairperson of India's largest media group, Bennett, Coleman & Co. Ltd., is no more. She passed away on Thursday at...

The second wave of the COVID19 pandemic has hit India very hard and businesses across the spectrum are suffering setbacks....

Nikhil Gandhi moves on from Bytedance

70% of the surveyed pool expressed a willingness to purchase products from a lesser-known brand: Report