Mumbai: The International Bhojpuri Film Awards, hosted in Singapore by Big Ganga, which was telecast on 31st Dec 2019, witnessed 3X viewership in week 53 alone as compared to an average of previous 4 weeks, which is also the highest-ever recorded mark in the Bhojpuri category till date. With such resounding numbers, BIG Ganga IBFA 2019 emerged as a  winner with the highest viewership of 1,254 (000), leaving its counterpart  who also telecast their own set of awards on 31st Dec,  far behind by garnering almost double the viewership in the same slots. The current feat also is higher compared to the previous edition of the IBFA awards ever hosted in the category by any channel. The event garnered a staggering reach of 4962 and remarkable TSV of 43.39 mins, which once again is stand out in the category for events hosted till date.

This awards ceremony rendered a perfect mixture of festivity and felicitation with celebrities from Bhojiwood and Bollywood coming together and mesmerizing viewers with their astonishing performances. The extravaganza was hosted by eminent personalities such as Ravi Kishan, Manoj Tiwari, Dinesh Lal Yadav, Aamrapali Dubey and Madhu Sharma whereas was attended by actors like Pawan Singh, Chintu Pandey, Kajal Raghwani, Sapna Gill, Krushna Abhishek, Kiku Sharda along with Bollywood Stars like Sunny Deol, Sunny Leone, Zarine Khan among others.  The audience, present in thousands comprised of Bhojpuris and natives of Singapore, President of Bhojpuri Association in Singapore and special guest – Mr. Jawed Ashraf, High Commissioner of India in Singapore who hails from Ara, Bihar and has a strong Bhojpuri connect. The enthralling spirit of the evening witnessed the High Commissioner breaking into an extempore speaking about the glory and rising power of Bhojpuri culture across the globe – evoking pride and thunderous claps from the audience across aisles.

Amarpreet Singh Saini, Business Head, BIG Ganga said, “BIG Ganga has always been at the forefront when it comes to understanding the requirements of its viewers. With IBFA 2019 breaking all records and creating history, is a testament to the fact that we have once again successfully brought content for the audience which they actually want to consume. We have always believed in experimenting with content and moving ahead in the game with a different strategy each time. The ratings proves that while our competitors in the market also telecast Bhojpuri awards, BIG Ganga brought newness to the awards show by taking a GLOCAL (Global yet local) approach.”

Speaking about the achievement, Samrat Ghosh, Cluster Business Head said, “This has been a tremendous achievement where BIG Ganga has not only set a benchmark again in the Bhojpuri industry but also left all its counterparts far behind. Bhojpuri is a rapidly-growing language and the entertainment industry has grown many folds in recent times. The humungous viewership numbers not only depicts the success story of IBFA, but brings forward the fact that Bhojpuri content is going beyond boundaries with there being a huge market for it. We aim to create more original content and cater to the audience with our unmatched offerings.” 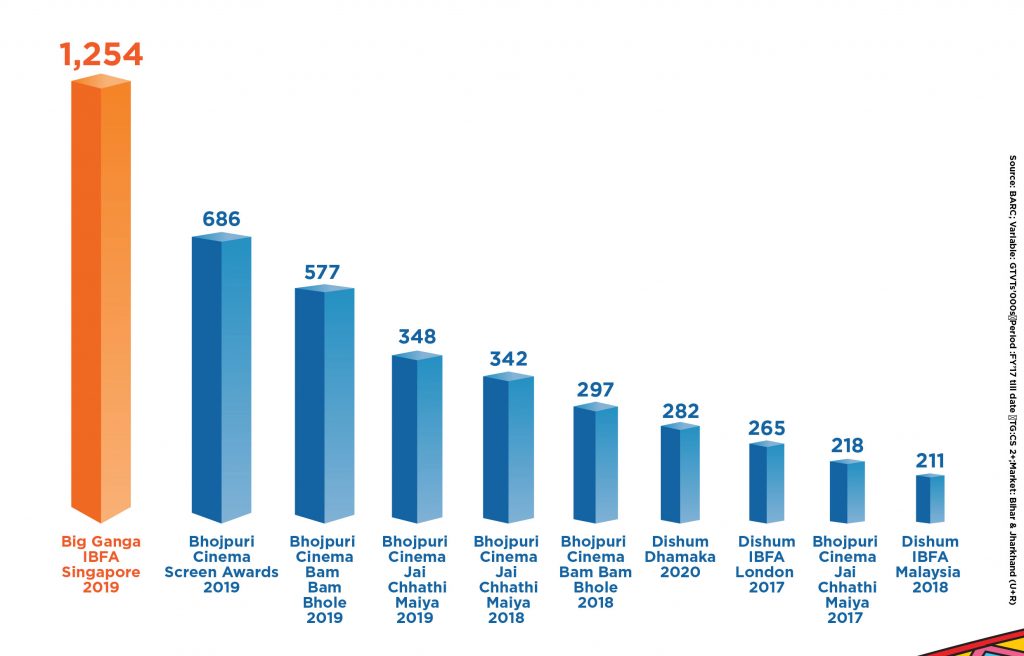 The channel took a 360-degree approach to market the awards property and reached out to its audience via various mediums mention mediums. BIG Ganga’s shows enthrall and entertain audiences with its unique content, thereby making this platform apt for the whole family. Going forward with Q4 new offerings, the channel is already lining up exciting topical properties to further deepen its bond with its audience. Enhancing and enriching regional pride through upcoming new offerings of the biggest event of Holi – Faguaa, unique cookery show – Roj Hoyi Bhoj #SwadKeSaath, MemSaab, the brand is all geared to catering to the deep pockets of the region with multiple genres of content.

Mumbai: Kaun Banega Crorepati 12 has begun with its special karamveer episodes that brings forth changemakers and fighters who make...