If other platforms can come to India and dominate, we can do the same and go global: Aditya Kothari, Chingari

Ever since the Tik-Tok ban in India, the home-grown Indian short video apps have been working 24/7 trying to take Tik-Tok’s place both in the audiences’ minds and the marketers’ plans. One such application that certainly is way ahead in this race is Chingari.

Chingari has not only been downloaded and loved by millions of Indians, and believe me, those download numbers increase ever hour, but has also been mentioned and applauded by our Honourable Prime Minister Modi in one of his Sunday morning radio show, Mann Ki Baat.

Chingari in the past one week has announced two major partnerships with ShemarooME and T-Series adding to its firepower.

In this freewheeling conversation with Chingari’s Chief Strategist & Co-Founder, Aditya Kothari, we discovered how Chingari has added so much ‘chingari’ to the short video apps space that even global giants such as Instagram and YouTube have also not been able to do so.

When was Chingari launched and when did you actually come to the limelight?

We launched Chingari 18 months ago. The founders Sumit Ghosh, Deepak Salvi, and Biswatma actually had started off and I joined in later as a Co-Founder and the Chief Strategist.

We came in the limelight before the Tik-Tok Ban because Anand Mahindra tweeted about us, saying that he never used Tik-Tok but he has used Chingari, and that he was impressed with the entire performance and the app. After which the entire Vocal for Local movement began which supported a lot of Indian startups and the Tik-Tok ban took us to another level. Post the Tik-Tok ban we have been working 24/7. 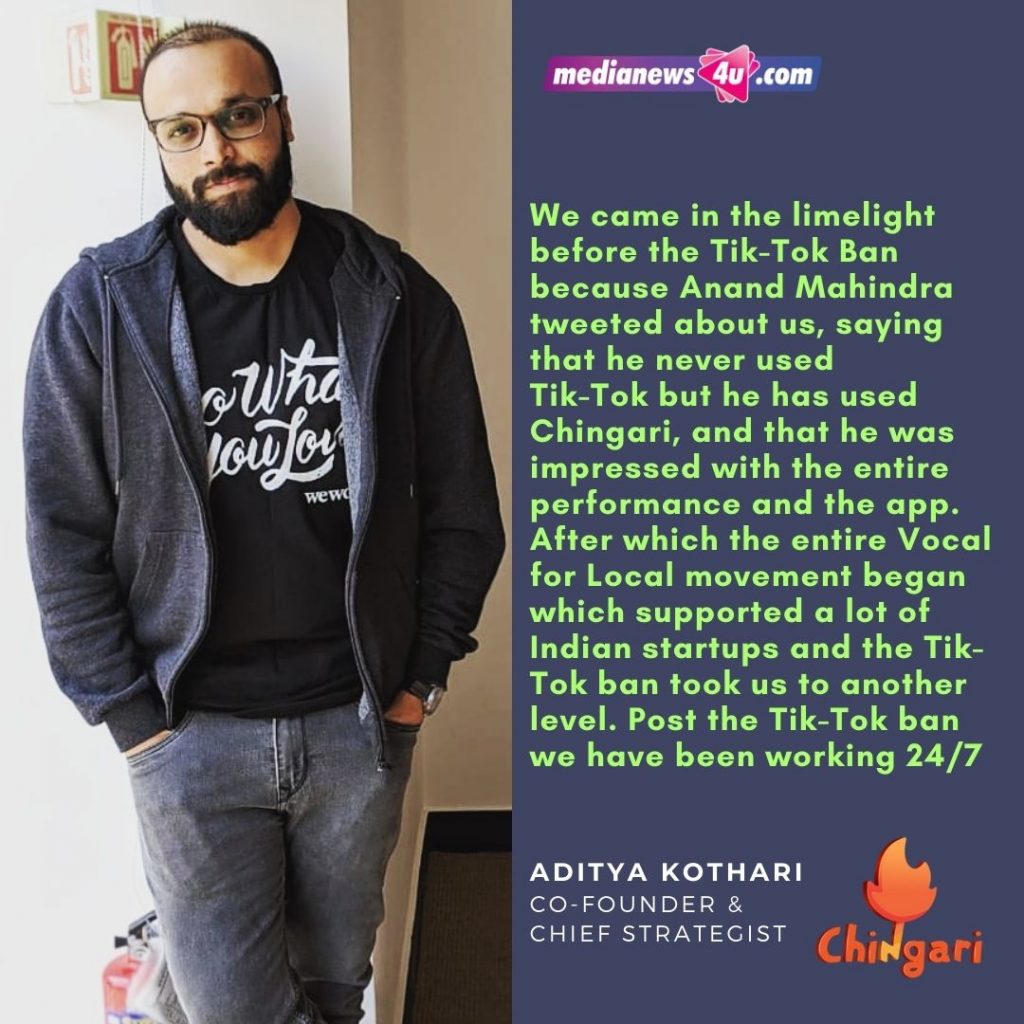 No matter how much people keep complaining about how cringe the content is – it is also the purest form of entertainment and that according to me is the best part about these short video platforms.

At Chingari, we are coming up a lot of interesting content such as educational content, we are making math fun! A lot of entrepreneurs are coming and talking about how one can be a leader. All this in a matter of a minute. 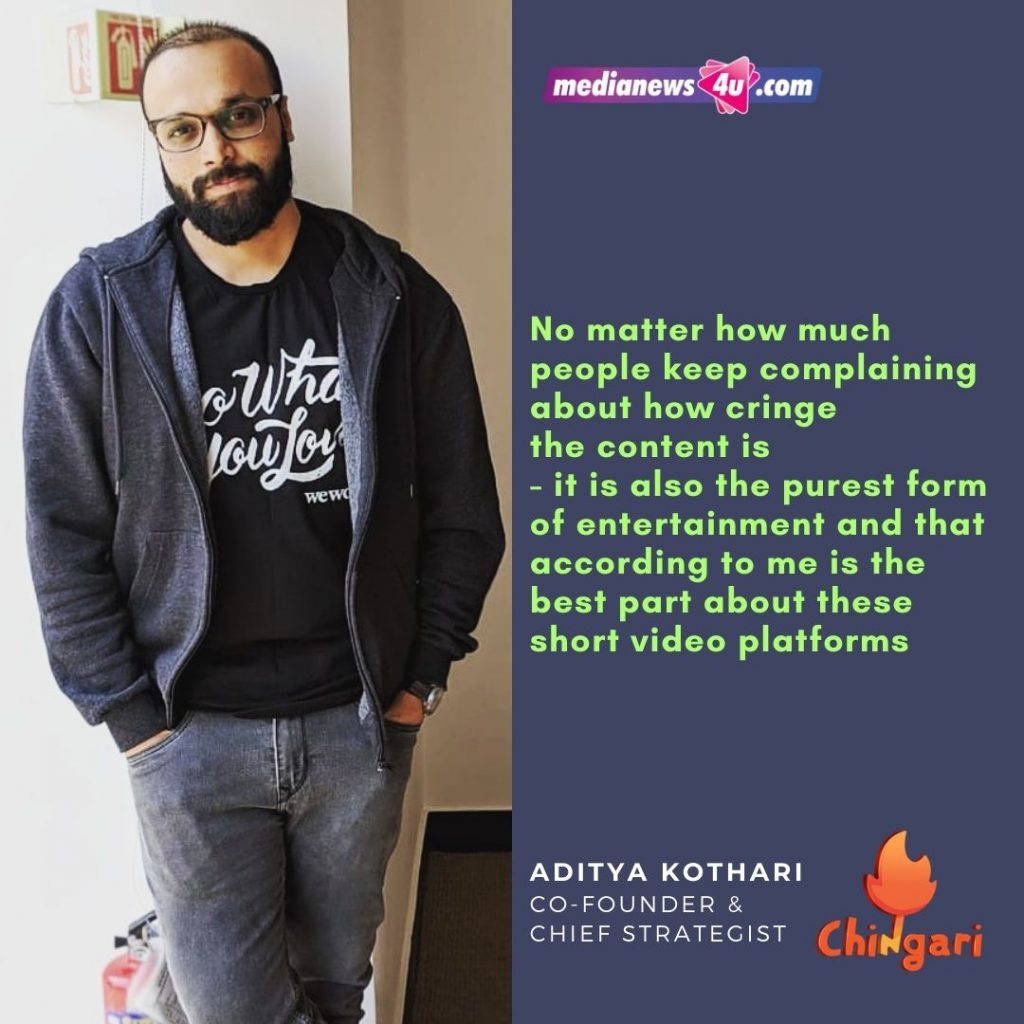 The reason why we made Chingari is simply because of how attention spans are decreasing. Take for example, authors, who moved from writing books to blogs and now to Twitter threads, from test matches to One day to T20 and now to 5-over gully cricket. It’s the same for entertainment also from Doordarshan to Tik-Tok, see how attention spans have reduced. Seeing how people are completely hooked on to social media, it was a no-brainer to enter the short video space. And social media is one of the best forms of learning, if one uses it the right way.

The TikTok Ban and the Vocal for Local movement opened the floodgates to so many Indian Home-grown applications and not just that, even the likes of Instagram and now Youtube too have jumped into the short-video ocean… so how different is Chingari from all the other applications that exist in the market?

I like giving case studies, so people understand better. There is a reason why a Facebook or a YouTube or an Instagram for that matter could not penetrate into the tier-two, tier-three or even the tier-four markets of India, which for us is Bharat. When we started Chingari, we knew that we wanted to cater to the Bharat audience. And we know the literacy rate of India, now do you expect a person to go to Instagram, swipe stories, then go to reels and make videos?

Now, imagine a construction worker who loves dancing and wants to upload his dance video. Do you think he’ll be able to understand how Instagram Reels works? All he wants is an app where he sees the camera, records instantly and uploads it. That’s one main feature of Chingari.

Second is the vernacular space. We have 10 plus languages on the app. If a language in India has a script? We have it on Chingari!

We are a camera tech and a creator first company. We’re not making influencers, larger influencers. We are making a normal person an influencer, and how do we do that?is, for example, by providing the best camera with the best filters, effects and editing ease. This enables the content creator to do what they do the best, create content! We are the only Indian company that is actually making their own camera, as compared to any other competitors of ours who has outsourced the camera to a Chinese company.

We are growing 100% organic. We have 30 million plus users without any running any ads and this is all organic. 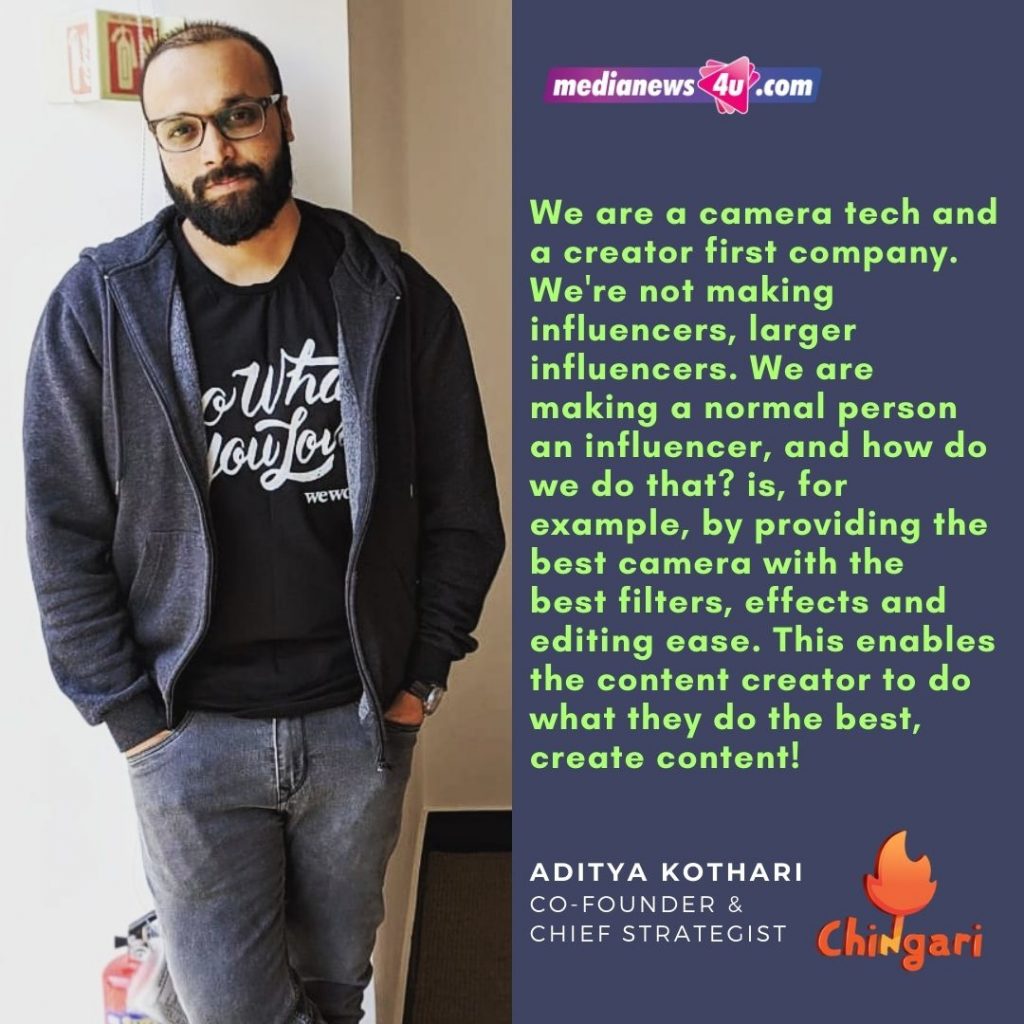 How do you compete with the big OTT platforms such as Zee5 HiPi and MX Takatak that have also created short form video platforms?

We started Chingari 18 months ago. We are the ones that validated this idea a few months back. A lot of these players created a short-video app in 38 hours, while we built the app in the last 18 months and the focus we have is on our tech.

What is your vision and mission for Chingari?

Our mission is very simple, we see that a YouTube, Instagram has made a brilliant platform for the tier-one people and made them influencers, that’s just 10% of the population. The Tier-two and three cities is where the real talent exists. Our regional language base is so strong that if tomorrow a hundred customers say that they want an x language, we’ll go ahead and built it. We are enablers.

Our entire objective is to get as much talent as possible from India on the platform and showcase this to the world, Instagram, Facebook are not Indian platforms but someone has to make an Indian platform that’s been watched by the world.

Just making sure that we organically grow as fast as possible and make the best platform for the world, of course you’re making for India but we don’t stop there. If other platforms can come to India and dominate, we can do the same. We’ve built local, but we go global. 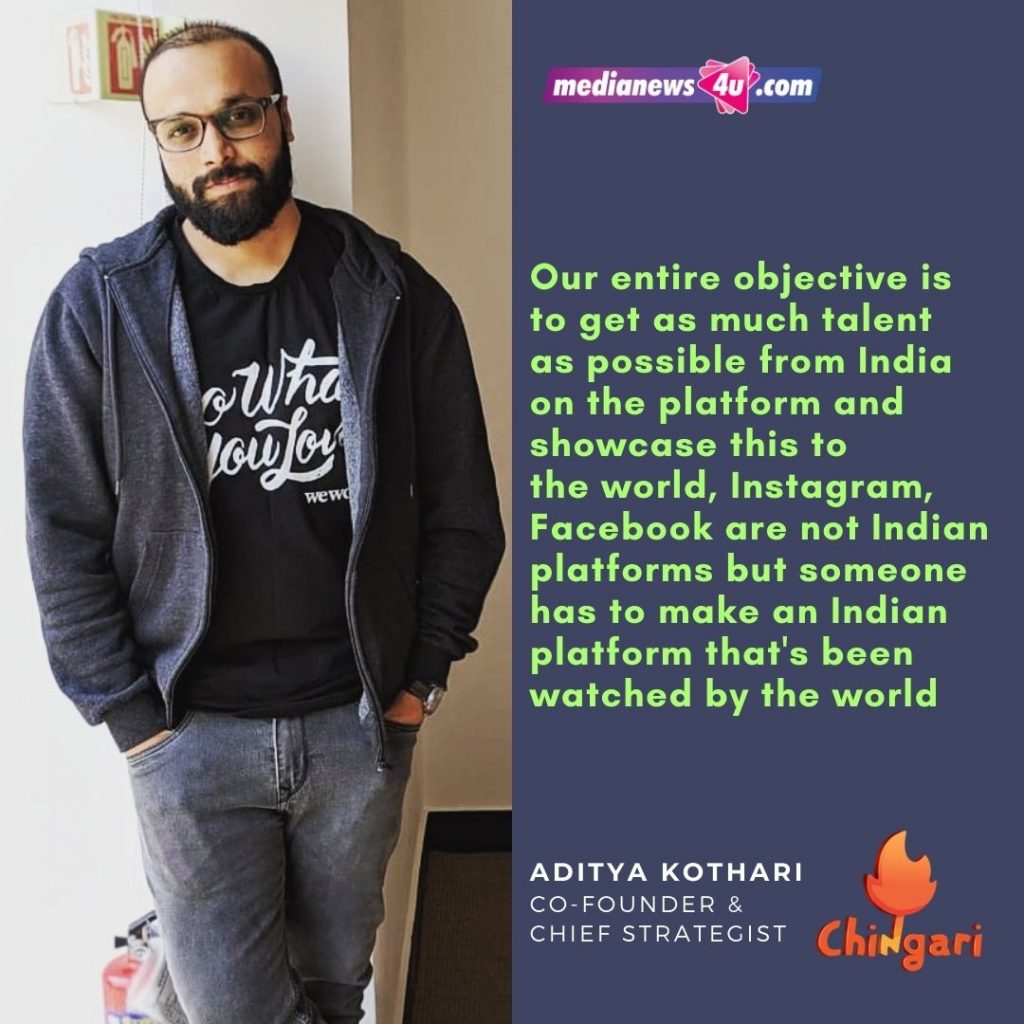 What would be a progress report of Chingari post the Tik-Tok ban, just purely the numbers?

We have 30 million+ downloads and we have 50 million+ videos being watched every day and that’s something I can give out to you right away.

Dive deep into the privacy policy and settings of Chingari because that’s what triggered the goodbye of Tik-Tok from the Indian market. How safe is Chingari from the data protection and privacy perspective?

Yes, it’s very safe. All our servers are in India, everything is done India and matter of fact, one of the reasons why Prime Minister Modi Ji has endorsed us because he knows that these concerns have been taken care of. We don’t collect private information and circulate anywhere.

I noticed that a lot of videos on Chingari were created on other platforms, so how are you approving/regulating or to say authenticating content on the platform.

Firstly, it’s great that these content creators who were on other platforms are coming to our platform and in such a hurry they are using their old content on Chingari. Our team is actually contacting these creators and helping them to make content on the platform. Our moderation team is in place to regulate and monitor content and is also building on the AI and ML capabilities of the platform.

Wow! Since you mentioned about your team… tell us about the team at Chingari?

At the moment we are a small team of 25+ which is the core team and the moderation team which is huge. All of us are operating from Bangalore and we are all working from home. But once pandemic is over, hopefully then of course, we all are going to move together and work from the office. We are not restricting ourselves and as and when we see opportunities that we already are we go forward with it.

You already have great numbers from the subscriber and user front… tell us about the advertiser response to Chingari and also the categories of advertisers?

To be honest it’s been phenomenal and the largest advertising share right now is not a television or radio, it’s digital. All the brands know that if they have to really scale, it’s not the 10% of India they need to target but they need to that the 90% of India. Now who understands the 90% India? A platform like Chingari…

I’m super excited to tell you the names but I cannot, so a lot of brands have come and they’re still coming in and talking to us and also working with us. On the other hand there are many influencers and not just one but many and it’s not fair to name a few.

We are a homegrown app, so our entire focus is to make sure that we built for the content creators make as many influences as possible on the platform and give whatever they need, and be the best company that Indian world has ever seen.