Internet most preferred medium for seeking news while 53% still engage with Television: Axis My India Report

by Editorial
in Exclusive, Featured, Market Analysis
Reading Time: 2 mins read
A A

Axis My India released its latest India Consumer Sentiment Index (CSI) report which was compiled after surveying over 10563 people, out of which 71% is from rural India while 29% is from urban India.

As per the report, the month of December revealed that a combined 58% engage with Digital apps / Websites + social media and 53% engage with television for news/latest updates and 37% with newspapers. WhatsApp, Facebook, YouTube and Instagram are some of the most frequented apps by consumers with WhatsApp topping the last. WhatsApp voted as the most frequented app (view of 31%), followed by Facebook (26%) and YouTube (21%). Moreover, media engagement, in general, has increased for 25% of the families, the highest in the last three months.

Commenting on the December report, Pradeep Gupta, CMD, Axis My India, said, “While the new year brought along hope and optimism for a better 2022, consumers’ purse strings suggest otherwise. The lowest dip in non-essential spending is proof that consumers are curling back to apprehensions triggered by the new variant of the virus and also hoping for a booster dose, something which has recently been announced by the Government.”

“Moreover, the higher preference for the web for seeking news only reflects the gradual change in media consumption behavior owing to consistent lockdown experienced by consumers in the last two years. In addition, the inclination towards WhatsApp, Facebook and YouTube reflects an evolved and unconscious mode of conversing, converging or consuming dialogue/information/media,” he added. 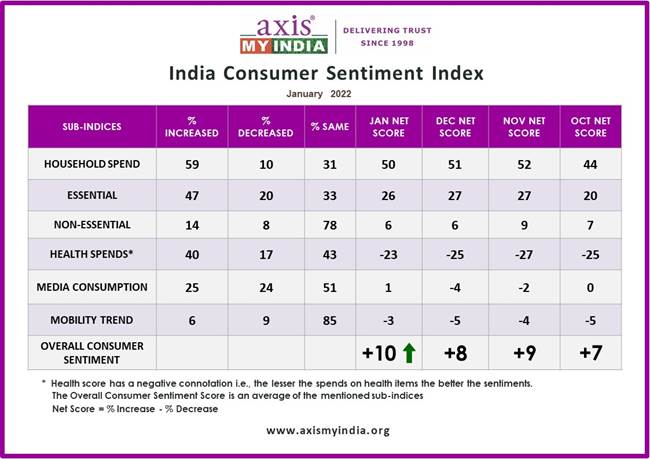