by Editorial
in Advertising, Events, Featured
Reading Time: 5 mins read
A A

Nine compelling advertisements for their gender sensitivity were recognized at the National edition of the 12th Laadli Media & Advertising Awards for Gender Sensitivity (NLMAAGS) at a award ceremony held at the Tata Theatre, NCPA, on Tuesday the 29th November. They were picked out from thirty-four shortlisted finalists by a jury comprising pioneers of the advertising sector.

Noteworthy works in journalism, advertising, films, television, theatre, and books were felicitated at the function which was returning after a gap of two years as an on-ground event. Arne Jan Flølo Honorable Consul General of Norway in Mumbai and Andrea Wojnar, Country Representative, UNFPA India, were the guests of honour. Noted film personality Nandita Das was the chief guest. It was attended by a glittering ensemble of stellar personalities. The initiative was once again supported by UNFPA and the Norwegian Embassy in India.

Mohammad Khan and Nandini Dias presented the next set of awards for the people who not only shape our purchasing behaviours but reflect and influence our mindsets- the advertisers and the creative teams who put transformative content in the public domain.

Two runner-ups, one in the PRODUCT category were presented to BBDO INDIA for ARIEL | WHEN WE #SEEEQUAL, WE #SHARETHELOAD. This edition of #ShareTheLoad awakens us to another facet of ingrained yet invisible inequality amongst genders in the sharing of domestic work. When men share the load with other Men they share homes with when single, why not with their spouses after marriage? Makes you think, yet again. The other runner-up award went for the PRODUCT category to SHREYANSH INNOVATIONS for | MANYAVAR MOHEY | #KanyaMaan. This film calls out the patriarchal traditions that look at everything in a girl’s life as a path to #KanyaDaan.

Five awards were presented for the year. Team OGILVY received the award in the CSR category for | THE TALE OF 2 LAJJOS | PROJECT NANHI KALI, an initiative of  KC Mahindra Education Trust and Naandi Foundation, while BBDO INDIA in the category CORPORATE for | P&G SHIKSHA | THE STORY OF SUSHILA, a moving tale of a beneficiary of the Shiksha programme were the recipient.  COCONUT FILMS in the PRODUCT category for | ROYAL ENFIELD| HOME was felicitated for its poetic ode to one’s home and the inimitable place it holds, as it captures a young woman motorbiker who rides home from a faraway land to her roots on the motorcycle one associates only with men. The award for the services category went to LOWE LINTAS DELHI for| GOOGLE INDIA | MANJHA. A series of films in the ‘Bolne Se Sab Hoga’ campaign, it depicts the beautiful alignment of Google voice search products with gender empowerment. The award for SOCIAL EXPERIMENT was presented to DDB MUDRA for | STAYFREE | IT’S JUST A PERIOD, for prompting conversations on periods between fathers and daughters. 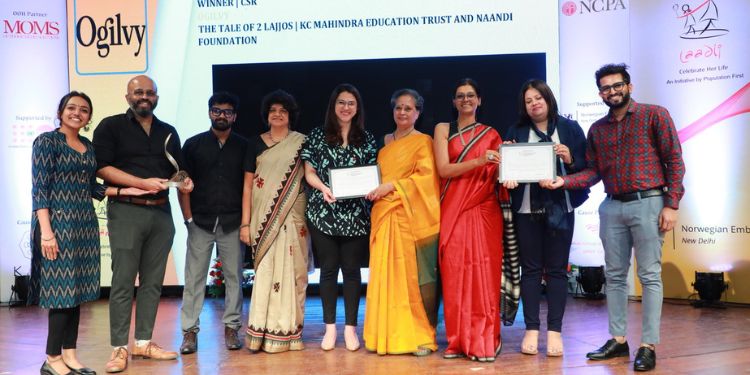 A special category Category Buster was instituted this year to salute DJANGO DIGITAL’s bold statement calling out the societal attitudes towards a normal bodily process of menstruation. A truly path-breaking film that helps the brand live up to its name of ‘Lemme Be’ wearing not just its attitude with sass but also echoing what’s on the minds of young menstruators, Django Digital was presented with the CATEGORY BUSTER for MY STORY. PERIOD! For LEMME BE |

The Grand Prix for the year was presented to a team that has consistently broken the glass ceiling and called out the patriarchal traditions, brand Tanishq, and its creative agency DENTSU WEBCHUTNEY for ‘The ‘Marriage Conversations’ that spotlights real-life issues that are seldom talked about by couples before exchanging the engagement rings.

“It is twenty years since Population First was established and 15 years since we launched Laadli. There has been a shift in the media, though a small one. We are today acutely aware and are open to speaking about reporting on gender issues and gender equality in media organizations.,” said Bobby Sista, Founder and Executive trustee, Population First.

Noted film personality Nandita Das who was the Chief Guest shared, “We have made significant progress in gender space, yet we have a long way to go still. I grew up in a family, where I saw my full-time working mother supported by my father in every way. He would cook and tend to other household chores. But, when I look around, there are still families where women bear the brunt of the burden. The work being done by Laadli will go a long way in shifting perceptions”.

Each year the National Awards recognize pioneering change-makers who through the dint of their persistent work and vision have called out the structures that resist gender equality. This year for the Laadli Of The Century award, the organisers salute a “gentle revolutionary”, Ela Ramesh Bhatt who passed away on November 2nd. She is being presented the award posthumously for impacting the lives of thousands of women, for giving us a working model of women’s empowerment, and for initiating the women’s cooperative movement in India. The Laadli Lifetime Achievement award was presented to Indira Jaising for ardently advocating for social justice and women’s rights, while the Laadli Gender Champion Award which is instituted in memory of the triumvirate of the Indian Feminist Movement, Gail Omvedt, Kamla Bhasin, and Sonal Shukla, to Advocate Varsha Deshpande, who has been courageously working to save and protect the girl child through judicious implementation of Pre-Conception and Pre-natal Diagnostic Techniques (PCPNDT) Act, 2002. Kausar Munir was presented the Laadli Woman Behind the Screen Award for stepping into hitherto a male bastion in the film industry and establishing an undeniable place for herself as a poet, lyricist, and dialogue writer. For her undeniable contribution to the world of theatre, Rohini Hattangadi was presented with the award for Theatre.

“Achieving gender balance in media reporting is working towards achieving gender equality in society. The Laadli Media & Advertising Awards for Gender Sensitivity recognizes this need and the work that both female and male journalists contribute to a more gender-equal society,” noted the Consul General of Norway, Arne Jan Flølo.

“UNFPA strives to address discriminatory practices that impede gender equality. We understand that women and their issues are not at parity with men in the media or in the newsroom. This encouraged us to support the Laadli campaign, which has over the years, motivated communication professionals to portray men and women/ boys and girls in gender-diverse roles; It has ensured that sufficient space is given for women-centric stories and encouraged communication professionals to analyze every story from a gender lens,” noted Andrea Wojnar, Resident Representative – UNFPA India, UNFPA India while commending the work done by Laadli Media Awards and all the winners.

“Media has both reach and influence. It has the power to bring gender equality into political agendas and policies and play the role of a watchdog to ensure that programmes and schemes are implemented with sensitivity. The award winners show what sensitive and committed journalism is,” said Dr. A.L. Sharada, Director Population First. The book, ‘The Deep Dive: Media Reporting on Gender Issues’ which was launched at the event, is culled from amongst the 76 award-winning journalistic entries and offers an insight into various concerns plaguing our society, and some windows of hope. Whether it is gender- insensitivity, injustice, misogyny, or the constant marginalization of LGBTQIA persons, this compilation presents an eye-opening account of people, situations, incidents, and those seeking to break the barriers and usher in a new dawn. The cover page of this very thought-provoking and engaging book, edited by Dr A.L Sharada, is designed by Vinta Nanda. 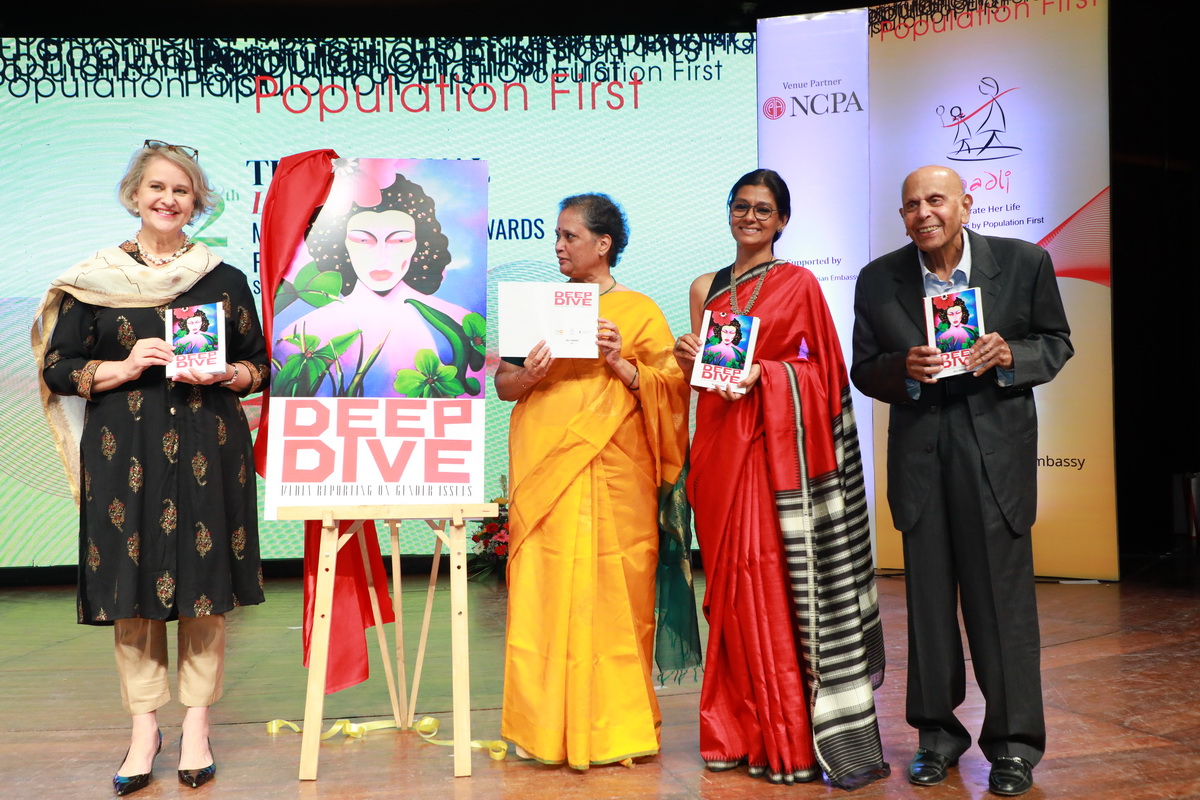 Arpana Rao, the acclaimed Kathak artist & her students of AMNA – the Arpana Mahuaa Nritya Academy, young Govandi Gully Girl, rapper Saniya MQ, and the Sufi music exponent Pooja Gaitonde regaled the audience with their scintillating performances at the awards function which was hosted by Meher Acharya Dar, actor and a well-known media person.