Live video shopping is the future of social commerce, and we at KIKO TV aim to be the currency to shop within the app, while seamlessly enjoying their content: Neeta Chawla

KIKO TV is India’s first AI-based short video E-Commerce & Entertainment platform, launched by Smooth Tag Technologies. It was launched amidst the pandemic as an Indian solution post the ban by the Indian government on Chinese apps.

It also allows users to become influencers and live stream on the app by adding brands to sell instantly. KIKO TV also provides a platform for small vendors to register and sell their products online, thus reaching to a larger audience base. Additionally, KIKO TV uses AI technology to detect pornography, weapons, cyber abuse, and crime scenes in its video, removing them from the platform immediately. This ensures the safety of the app, allowing its users a comfortable video streaming experience.

Neeta Chawla, Chief Strategy Officer, KIKO TV speaks to us on receiving funds from marquee players, the App and more……….

What is the idea behind launching KIKO TV?

The idea behind launching KIKO TV is firstly to fill in the void left after the ban of the Chinese apps and provide the audience and entire entertainment approach by a Made in India app. Our primary objective is of being a Video shopping app, with inclusion of Live Streaming Videos from sellers for real-time buyer seller interaction. Live Video shopping is the future of social commerce, and we at KIKO TV aim to be the first mover and leader in this space. 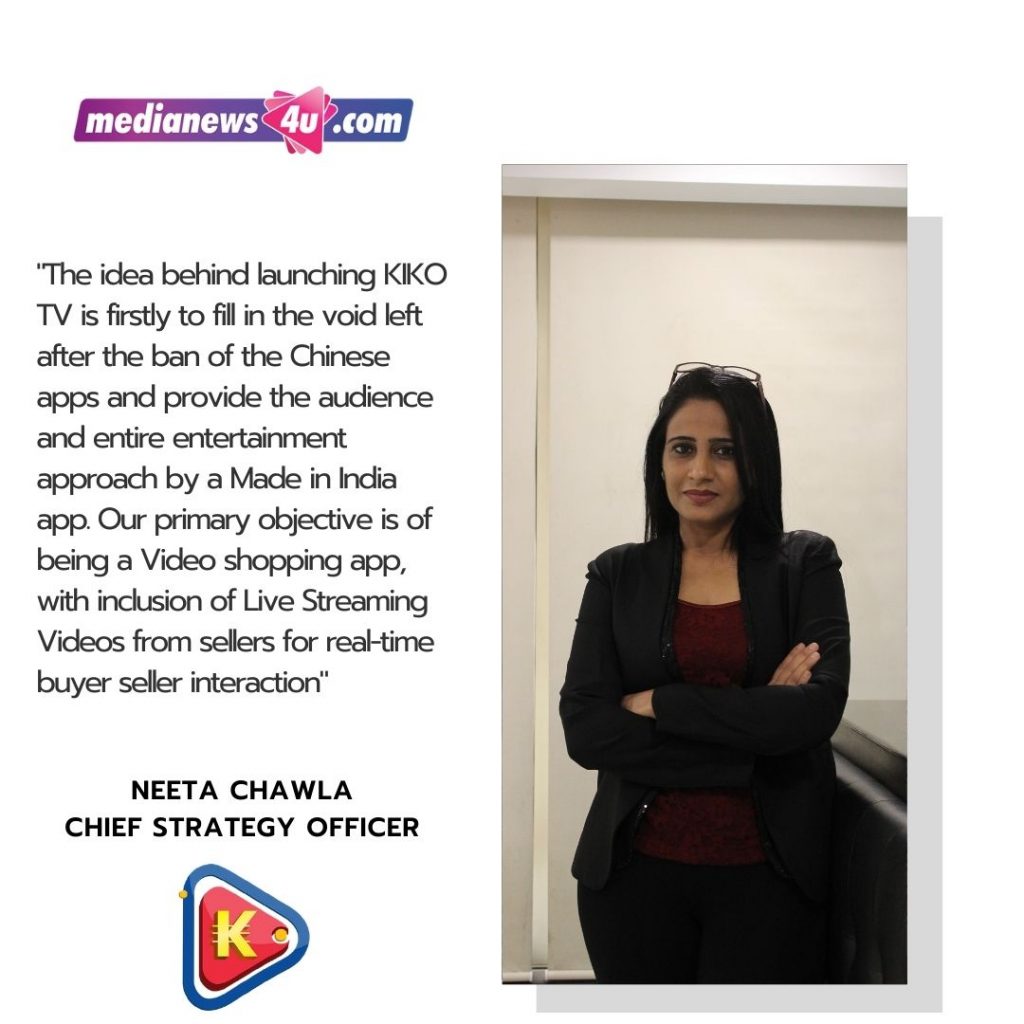 What are the key offerings and features of the app?

We offer a variety of features along with Short Entertainment Videos, they are just a small portion of our product. We allow users to shop within the app while enjoying the content. While viewing the videos, the users can also like and share the videos, to earn currency to shop within the app. This currency is called COINS and can be redeemed for goodies from the app!

Recently we added in-app gaming feature, wherein the users can play games in the app to earn coins. We will be adding new features over the next few months. Our aim is build a platform offering video commerce and Live shopping on our app, and enabling sellers to have a new way of connecting with buyers. So, in a way we are actually the Made in India response to something India has not yet experienced…. :-). We will be what TikTok could not become. 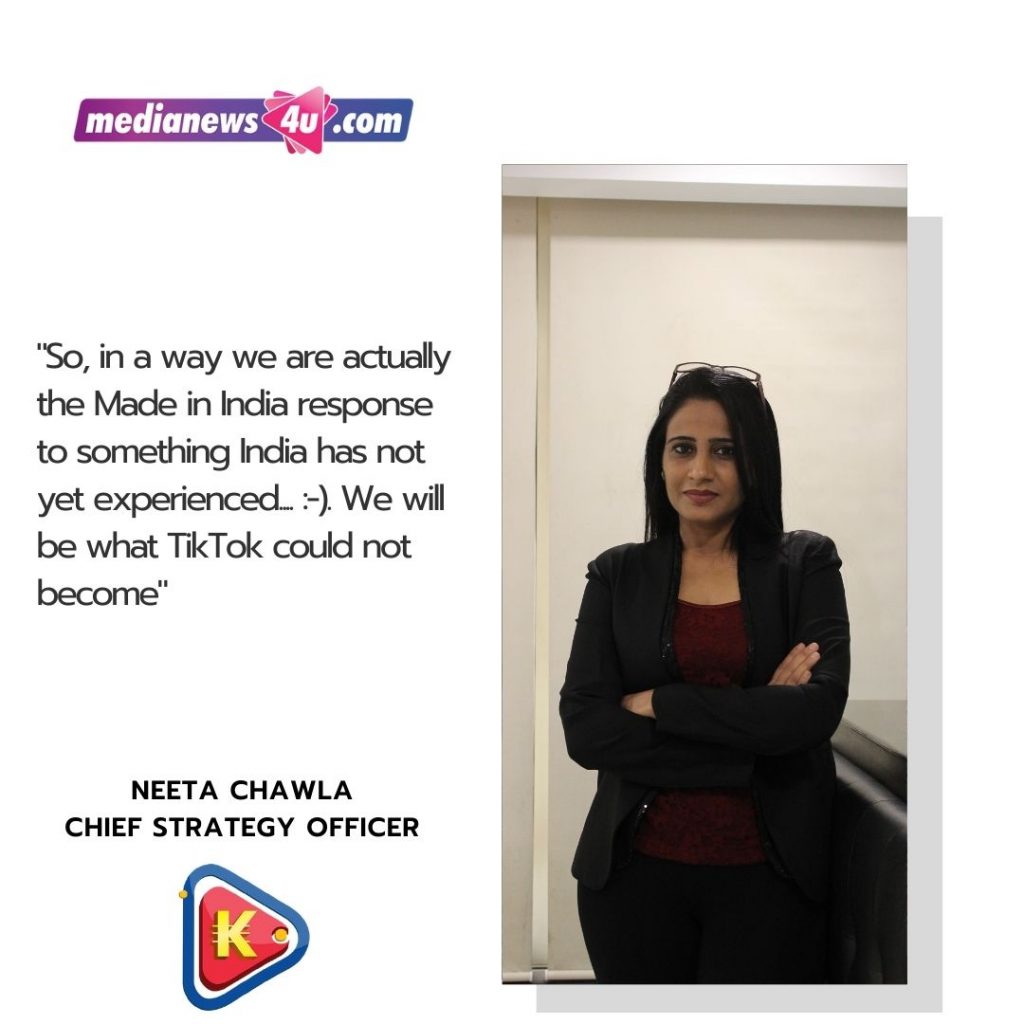 You have now received funding from some marquee players, your thoughts? How do you plan to utilise them?

Our current raise is an early round of funding which will be used for building and updating tech for live shopping, and investing in user acquisition and adoption.

Since we have our entire technology in India, we plan to invest in new age technology and AI which will help detect pornography, weapons, cyber abuse, and crime scene to block/remove the video from the platform, thereby maintaining a more safe and comfortable streaming experience for our users. 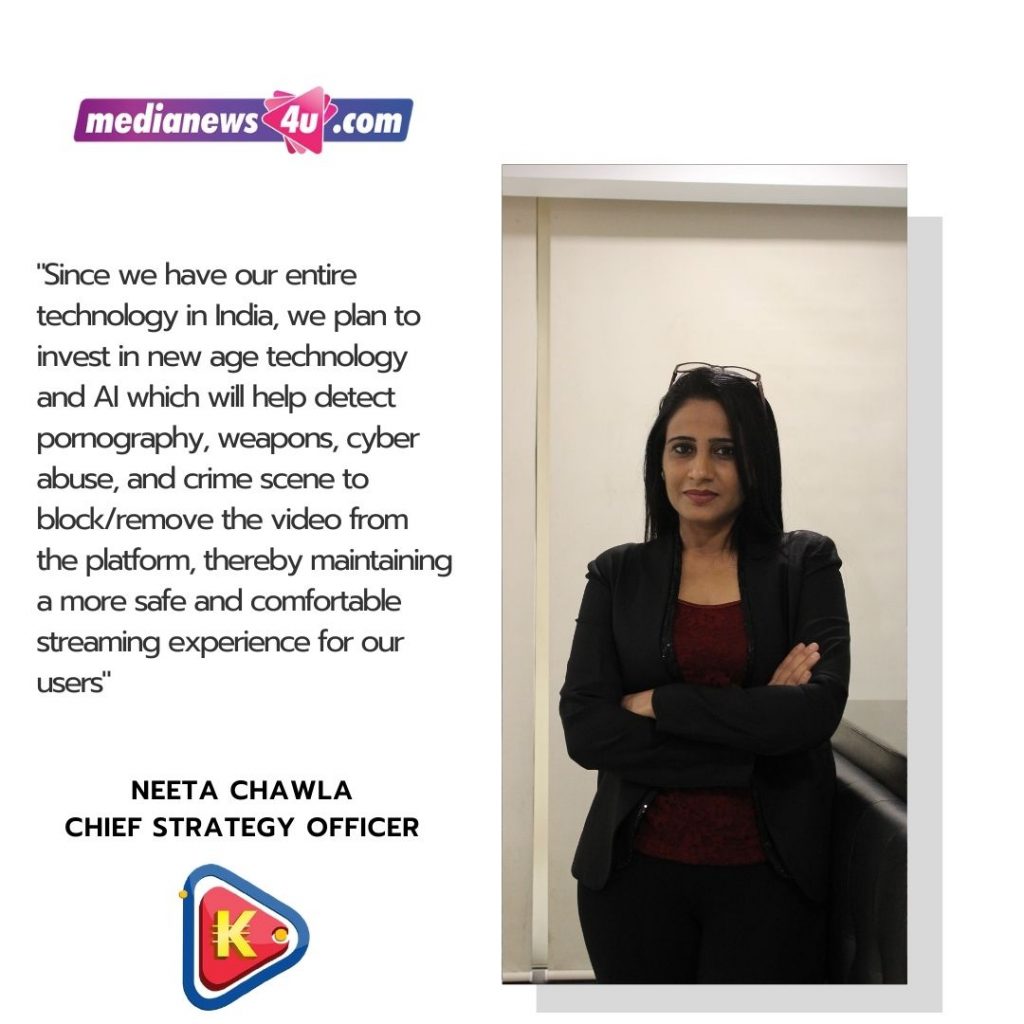 How does this platform work, as you have partnered with Indian merchants and vendors?

Currently we have on-boarded 20 sellers and are in talks with 100 more. Like creators, sellers are also making videos about their products which is helping them on the platform. We plan to enable small stores to launch they’re in app stores and connect them with potential buyers who would normally not be within the physical reach of their actual store. And get the regular two-way interaction experience with buyers during making a sale by offering the option of LIVE stores, which is a feature that no app has launched so far. 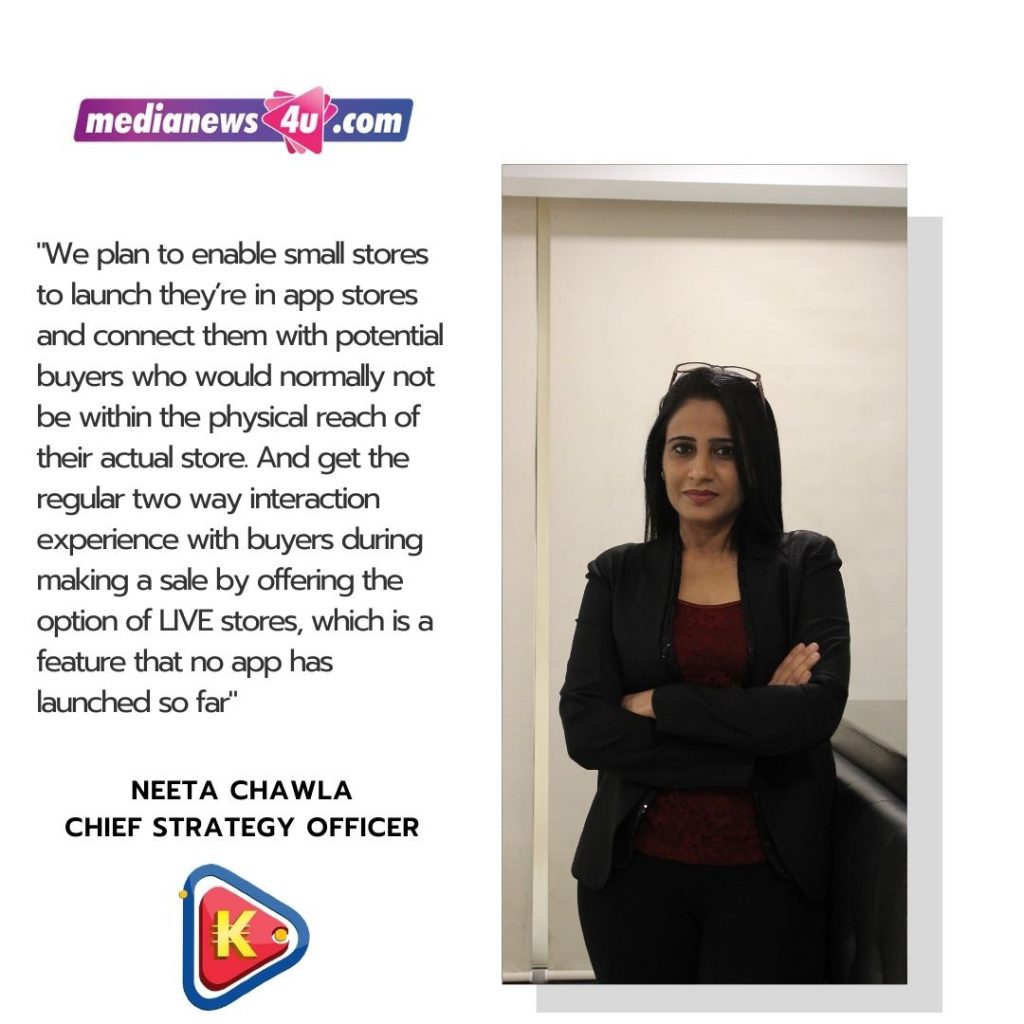 How big is the live Shopping and bidding market and how do you plan to penetrate in it?

Live shopping and live streaming commerce are yet to be launched and grown as a market in India. However, as per industry reports, Live Shopping was a $63 billion business in China in 2019 and expected to be $129 billion by the end of 2020.

Being first movers in this space, we would definitely have an advantage and we expect to continue to hold leadership in this segment. 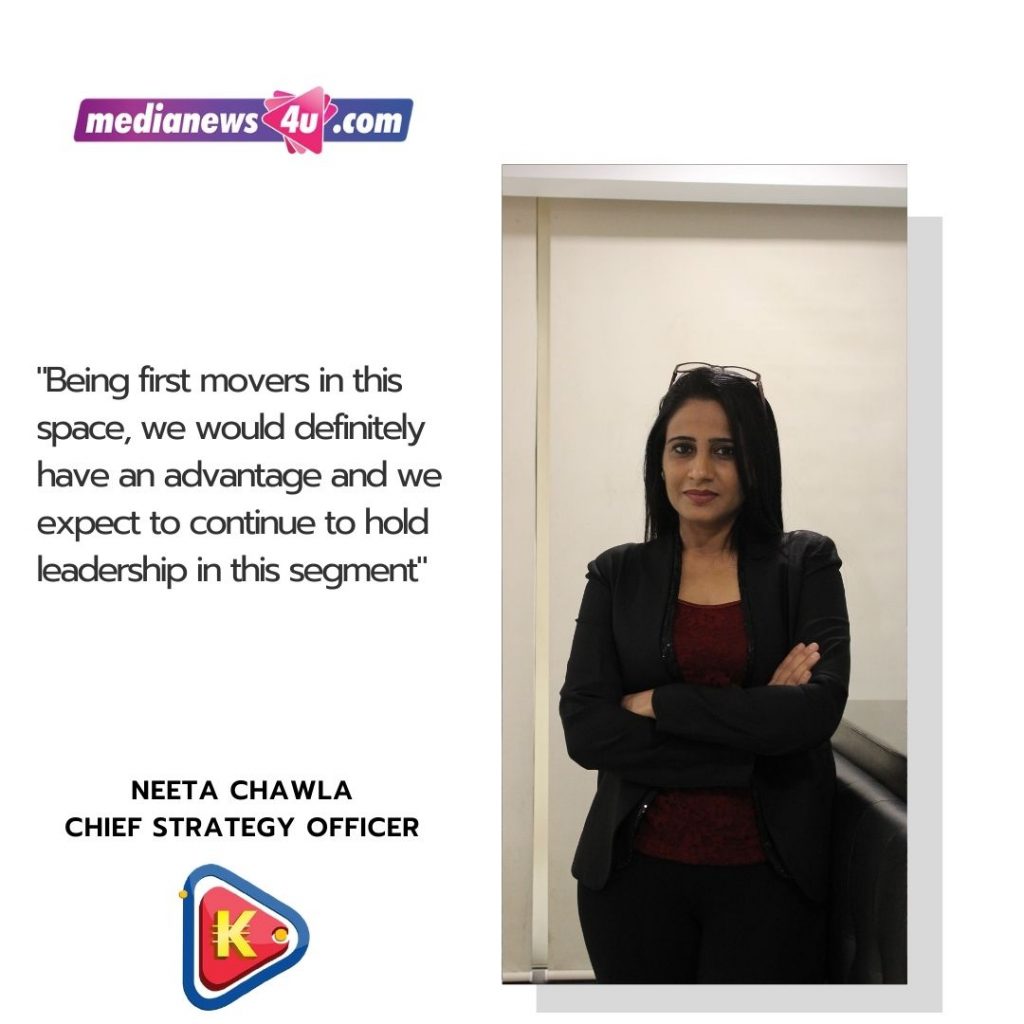 With the recent banning of Chinese Apps, how do you think the Indian market will warm up to Indian Apps?

The Indian market will warm up to apps that offer good functionality, speed and usability, and this does not necessarily mean that this benefit will only go to Indian apps. A lot of U.S. apps are also quickly taking the place of banned Chinese apps. Indian apps have the advantage given everything else is equal, there is a sense of pride among users to use apps made in India, as long as it is upto international standards.

A lot will depend on how Indian start-ups launching these apps are able to raise money to scale up, given the tough conditions brought in due to the Covid-19 pandemic. 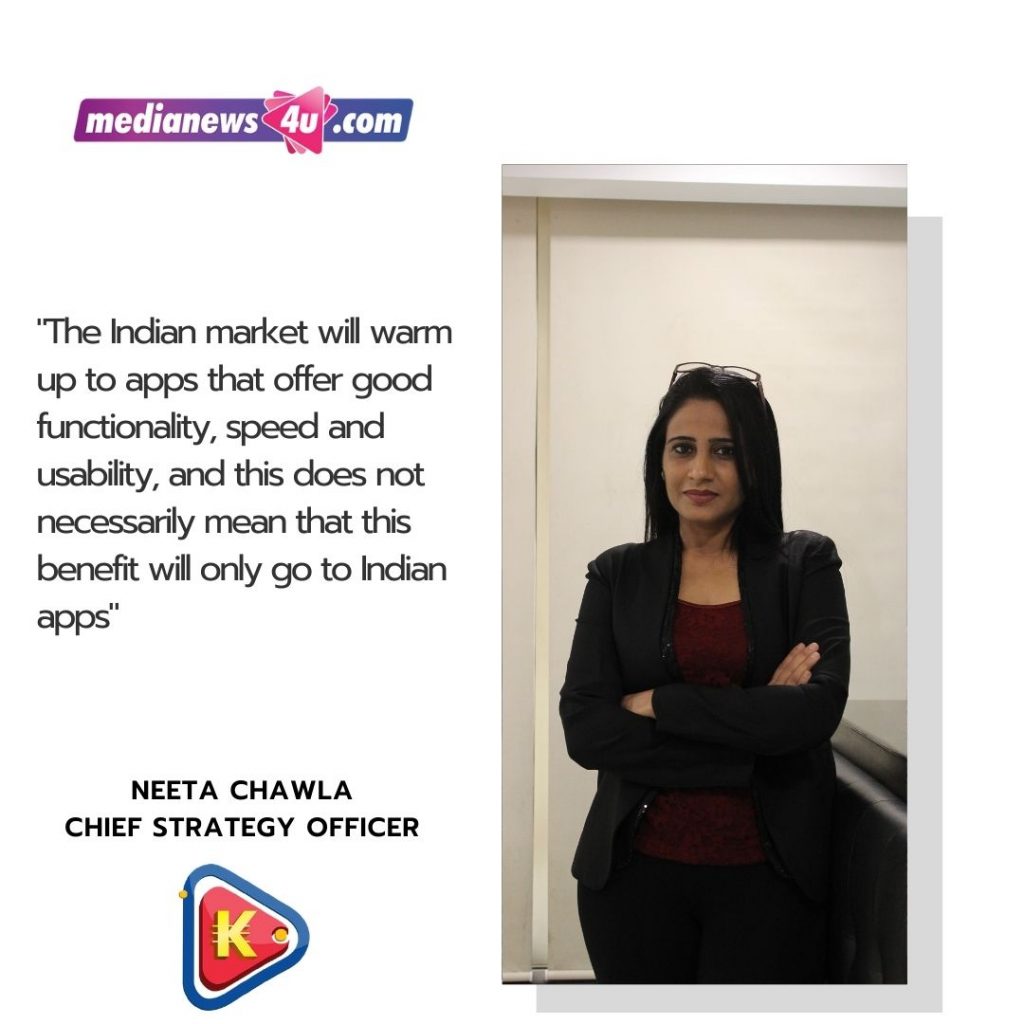 Sudhir Chaudhary moves on from Zee News; to start his own venture

Zee TV is all set to return with the 3rd edition of its non-fiction property – DID Super Moms, which...