New Delhi : In a new Ipsos survey of nearly 20,000 adults from 27 countries on behalf of the World Economic Forum,87% urban Indians and 74% global citizens say they will get the  vaccine shot when it is available. The survey also captured views on the likelihood of the vaccine coming this year and what were the reservations, among those who were not amenable to taking the vaccine comes.

“Vaccine is the only way to protect from the resilient SARS CoV-2 – and because of the high communicability of the contagion and with no sure shot cure in sight, the COVID 19 vaccine, to safeguard from the virus is definitely awaited by majority of Indians. The vaccine will herald some bit of normalcy,” said Amit Adarkar, CEO, Ipsos India. 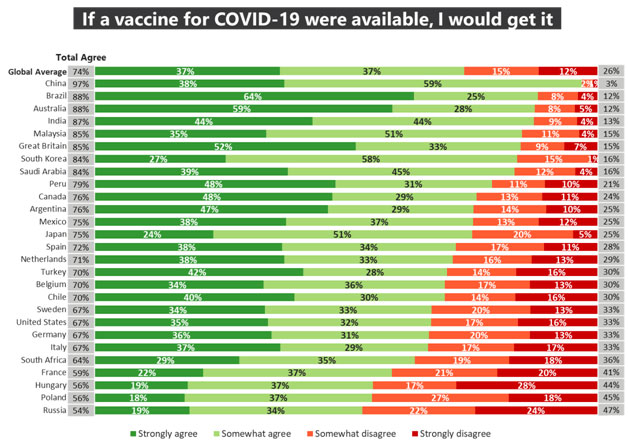 At least 3 in 4 urban Indians (74%) are hopeful of a COVID 19 Vaccine by year end. India is 3rd in the pecking order in optimism, after China (87%) and Saudi Arabia (75%). Global citizens and most markets are either divided or pessimistic of a vaccine coming about this soon, by year end that is. The markets most pessimistic were, Poland (22%), Japan (22%) and Belgium (23%). 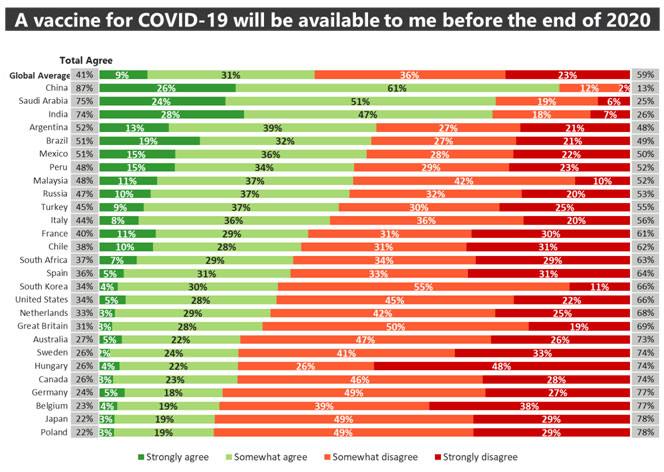 Reasons for not taking a vaccine

The nearly 5,000 adults surveyed who do not intend to take a vaccine for COVID-19 were asked why they would not do so. In every one of the 27 countries (including India), the #1 reason is worry about the side effects, cited by 56% globally (from 70% in Spain and 68% in Sweden to 41% in Argentina and 40% in Saudi Arabia).

The second-most common reason for not wanting to take a COVID-19 vaccine is doubt about its effectiveness, cited by 29% globally (from as many as 44% in Russia and Poland to just 12% in China and 9% in Mexico).

The third most common reason is the perception of not being enough at risk from COVID-19, cited by 19% globally. Among those who are reluctant to be vaccinated, this view is most prevalent in India (37%), Malaysia (36%) and Sweden (35%), while it is least so in Italy (7%) and Brazil (10%).

General opposition to vaccines is cited by 17% of those who would not get a COVID-19 vaccine globally, but as many as 30% in Russia and Italy. 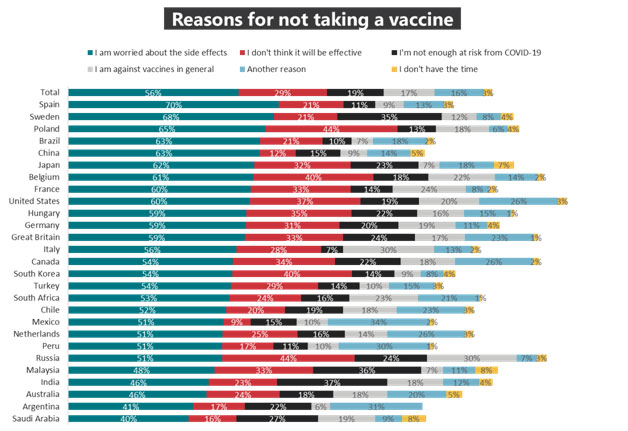 These are the results of a survey conducted by Ipsos between July 24 and August 7, 2020 on its Global Advisor online survey platform among a total of 19,519 adults, aged 18-74 in United States, Canada, Malaysia, South Africa, and Turkey, and aged 16-74 in 22 other countries.

The samples in Argentina, Australia, Belgium, Canada, France, Germany, Great Britain, Hungary, Italy, Japan, the Netherlands, Poland, South Korea, Spain, Sweden, and the U.S. can be taken as representative of these countries’ general adult population under the age of 75. The samples in Brazil, Chile, China (mainland), India, Malaysia, Mexico, Peru, Russia, Saudi Arabia, South Africa and Turkey are more urban, more educated, and/or more affluent than the general population. The survey results for these countries should be viewed as reflecting the views of the more “connected” segment of these population.

The data is weighted so that each country’s sample composition best reflects the demographic profile of the adult population according to the most recent census data.

Where results do not sum to 100 or the ‘difference’ appears to be +/-1 more/less than the actual, this may be due to rounding, multiple responses or the exclusion of don’t knows or not stated responses.

The publication of these findings abides by local rules and regulations.