‘Make in India’, has always been the Prime Minister Narendra Modi’s vision and mission. And, he has always stressed on that we need to buy local products and spread the word to others.

This has of course started a debate on what is actually local, are big MNCs established in India, hiring locals and manufacturing here be termed local? Or we are talking about solely Indian brands?

We at MediaNews4u have spoken to people from various sectors, startups and brand consultants to understand as to what how they have interpreted the term ‘Be Vocal for Local’.

Today we speak to two Media & Marketing Consultants on what is their take on ‘Be Vocal for Local’ – Himanshu Manglik – Walnutcap Consulting LLP and Karthik Srinivasan – Communication Consultant.

Himanshu: ‘Vocal for Local’ is a very interesting concept. It keeps reappearing, again and again, like the proverbial penny but in new shapes and sizes.  First Gandhiji raised it during the independence struggle and then in the early years after independence India’s economic policy focused on the need for India to be self-sufficient, with actions and policies being formulated contextually. Any concept that gives priority to the local and the nationalist sentiment is not to be taken lightly. The ‘Be vocal for local’ call now appears similar. However, our socio-economic situation now is very complex and we need to be very careful that we do not succumb to any economic myopia.

Though ‘Vocal for Local’ is an infectious call, it appears nebulous for an economy as complex as ours.  It is open to subjective interpretations and is caught in the grey zone. Unless we define and confine the scope of ‘swadeshi’ and ‘local’ which are mutually exclusive concepts, it will lead to policy and business uncertainty. ‘Local’ has clearly different parameters than ‘Swadeshi’ and the difference between the two is significant. However, if defined loosely then local and swadeshi could get used interchangeably. In fact, it is open knowledge that in recent years some people have been vigorously pushing for swadeshi and denouncing the multinationals. Therefore clarity would be critical for multinational corporations already invested in India, otherwise not only would it damage their existing operations, but it would also damage our own economic interests as well. This in turn will cascade into slowing down of potential FDI inflows that we continue to welcome eagerly. 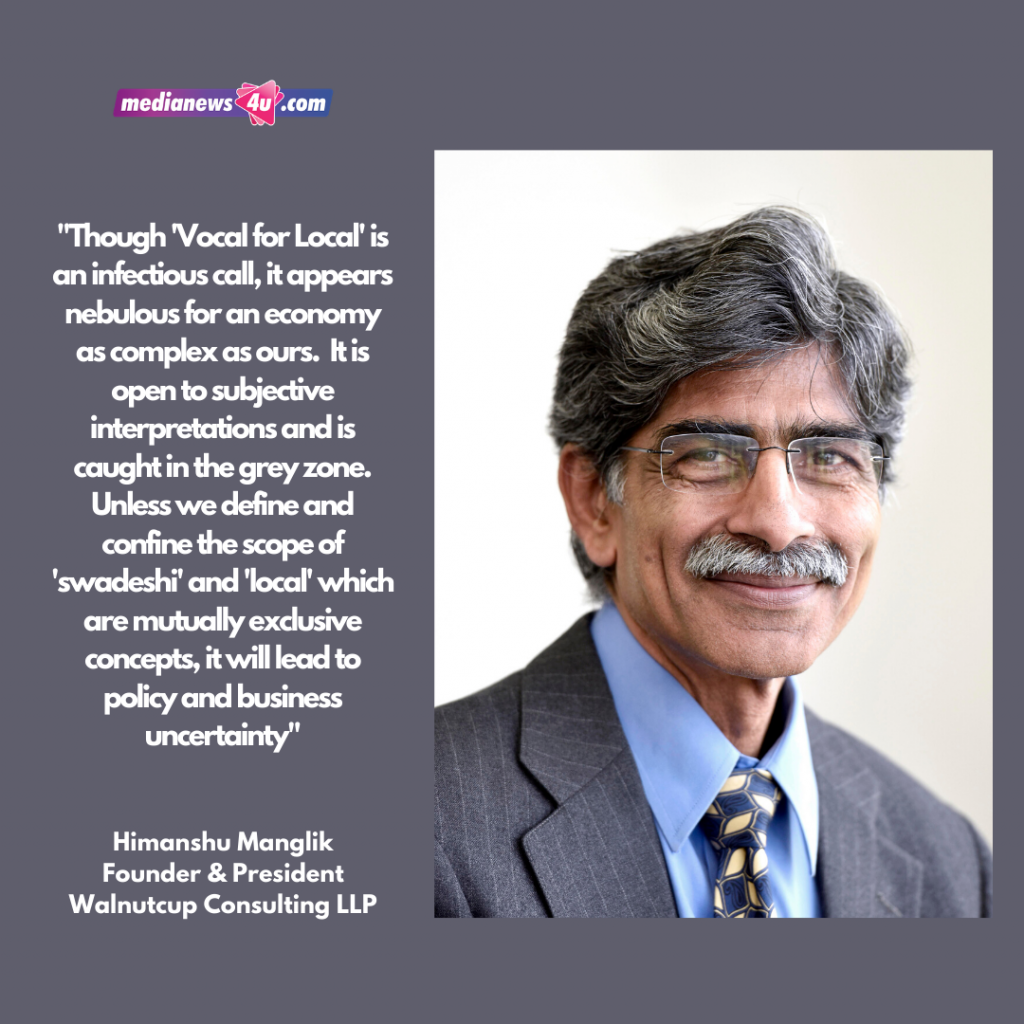 The Indian economy is a unique combination of the organized and the informal sector. Pushing ‘Vocal for local’ in this context is not going to be easy. It will require an exceptional balancing act.  On one hand, India’s hidden economy is a plurality of cottage industries and village communities in the multiple layers of the informal sector. This is the soft underbelly of the economy and is extremely fragile and vulnerable. It sustains almost 80 % of the country’s population and we must seriously evaluate the implications and policy fallouts on this economy resulting from this economic vision and ‘call to action’.

On the other hand, the organized sector that has been playing a significant role in generating employment, providing skills, technology, services, and serious R&D for development and growth has itself been struggling. It is struggling not because of an onslaught of foreign goods but because demand itself has been faltering. Unlike the informal economy, the organized sector is a mix of domestic companies and established  Multinationals who have, over long years, so vigorously localized their global expertise that they have become flag bearers of ‘Local’, perhaps more local than local. Though multinational in nature these companies have been benefitting the Indian economy with their investments in factories and commercial systems, transfer of technology, and best practices that enhance the local produce. Therefore, unless policies are conceived and planned systematically and well in time to protect their genuine concerns, this clarion call of ‘Vocal for local’ has the potential to disrupt the needed equilibrium. 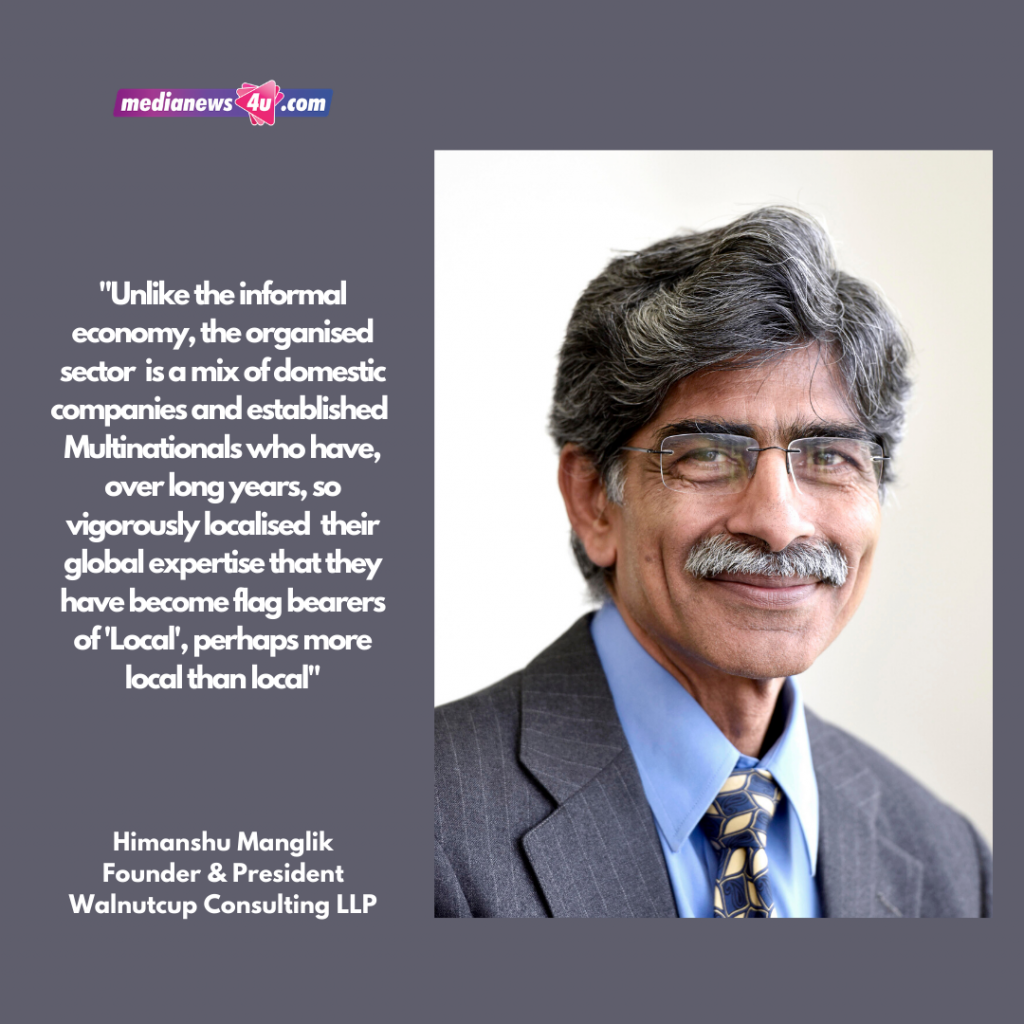 Even over the past decades, our experience with handling self-sufficiency in the complex Indian economy has not been easy. Despite the strong national fervor and economic vision with which it started out, India had to gradually keep trading off its protectionist policies to open up and accommodate progressive changes in the structure of the economy. As we recalled earlier, our experience with ’Local’ started during the freedom struggle, when Gandhiji called for swadeshi to boycott the foreign. For all practical purposes then, swadeshi meant local. However, at that time the objective was clearly to resist the exploitation of India by the British. It was a call for mass mobilization to support localized village economies and develop self-sufficient village clusters. The objective was not to become the industrial engine for swadeshi brands or to prepare for a global foray. It was far less ambitious than the current ‘vocal for local’, yet it did not work.

If ‘Be vocal for local’ is to be able to launch successful global brands we must realize that the fundamental of a strong brand is trust and confidence, in the product as well as the manufacturer of the product. We still have a long way to go before we can establish that trust in the quality and reliability of our local Indian brand in an open economy. We need to pull back and see why our manufacturing and agriculture are floundering, scaffold our weaknesses and build on our strengths before throwing the gauntlet of ‘Vocal for local’.

‘Vocal for Local’ may still work. Maybe. Provided we go beyond the rhetoric. Provided the vision statement is a serious intent with well-defined policies. It requires a roadmap that explains how the soft underbelly will be protected from trauma, how swadeshi will be kept distinct from local without allowing bias against international brands. These international brands manufacture locally and invest in the country’s economic activity are important, because they ensure employment for the locals and transfer knowledge and skills to the local eco-system.

‘Be vocal for local’ is not a bad direction. But as of now, it seems only a hazy possibility because almost everything that we have done in recent years has been detrimental to the large informal economy that forms the mainstay for this concept, or vision if you like.  Today, the situation is possibly worse than what it was in the early post-independence years when we started the economic reconstruction of India. Today, we might well be staring at the beginning of a sharp emotional divide between the privileged urban population and a huge growing mass of disillusioned and uncared for Rurbans, the rural and urban-rural. The situation must alert us to the potential magnitude of social changes underway. It will have implications for demand creation which is essential for the survival of business and industry. We need to stabilize the boat before changing lanes.

It is good to set our sights high, but we first need to emerge from the grey zone. To handle a complicated economic revival we will need clearly defined objectives, assessment of strategic implications, and professional expertise. If incomes continue to be disrupted and dwindle, as is quite likely, consumers may start trading down. This will disrupt the industry and rather than drive overall demand, Swadeshi could be a trigger for further disruption. ‘Be Vocal for Local’ is actually at the crossroads. It is uncomfortable like the bifocal lenses because you have to keep switching between near vision and distant vision. 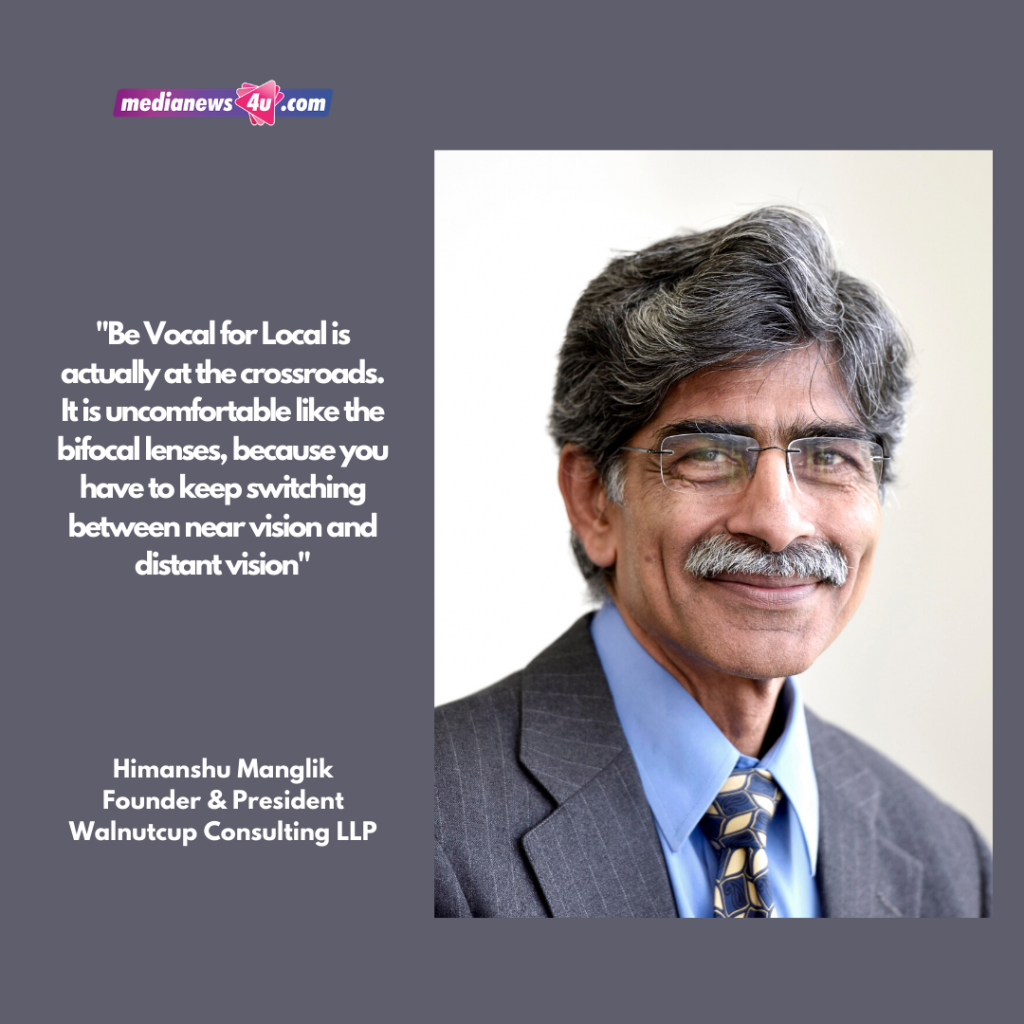 Karthik Sreenivasan: ‘Be vocal for local’, I see it as a judicious combination of

(a) Call for lesser dependence on China and

The difference between Local & Swadeshi, now, this is a problem. In the absence of categorical and clear directions on how to interpret ‘vocal for local’ and to what end/what purpose, people and institutions are bound to interpret a meaning that is convenient to them, for whatever purpose they think is important.

‘Local’ uttered in Karnataka, could also mean people who speak Kannada and have been born and brought up here. That was literally the political stand before the pandemic when the local Government finalized a plan for reservations for ‘locals’ in employment in the state. Now, the entire situation is turned on its head with each state Government actively trying assorted ways to make the guest laborers/migrants stay back to avoid a meltdown of multiple industries due to lack of workforce.

The global economy is more interconnected and interdependent than ever before. So there is no way to sharply define ‘local’ anymore. Swadeshi, on the other hand, has a history since our independence struggle and is something people strongly associate with. But having used to market forces, competitive prices and vibrant variety, going back to local manufacturing using only locally produced materials may alter the dynamics significantly on multiple levels.

Companies that may be global but have been in India, produce here and employ locals. From a positioning point of view, we’re likely to see multiple definitions of ‘local’ to suit multiple needs shortly. Companies that are funded by non-Indian sources, but employ Indian people are likely to argue that the latter makes them Indian. Similarly, companies with Chinese origins, but Indian manufacturing are likely to distance themselves from the origins more actively. All this would be geared towards keeping the status-quo since the market and consumers are used to a set of variables, prices, and processes. I do not think anyone would stop buying these products and there would be an active campaign/communication giving us enough emotional and logical reasons why we shouldn’t. 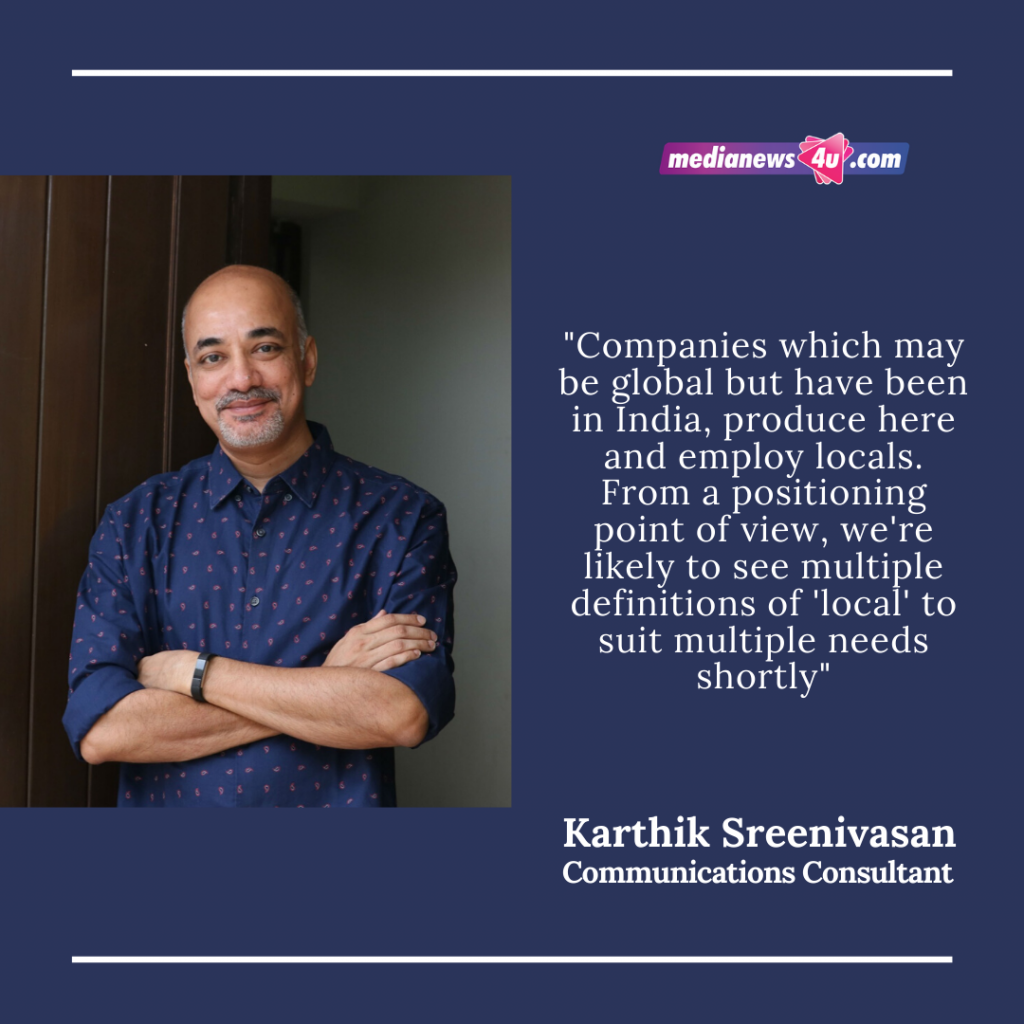 I am sure more brands would flaunt the ‘Made in India’, ‘Manufactured in India’, ‘98% Indian employees’, ‘Headquartered in India’, ‘Produced with 95% Indian materials’ and other such tags to ride on the sentiment, but the consumer is not an idiot. Neither are they hyper-rational or altruistic. 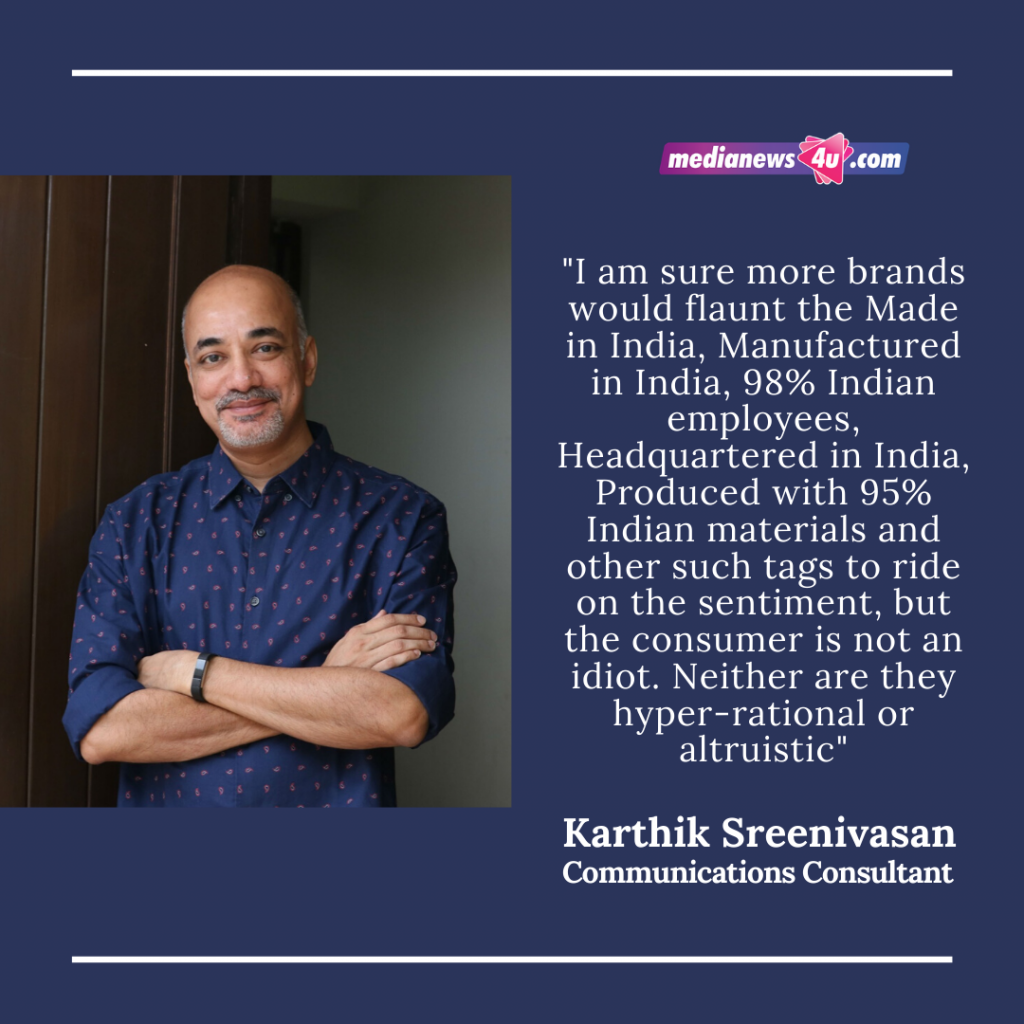 Patanjali spearheaded this movement in recent times with an almost-militant vigor. But other brands have been doing it for a long time – Dabur, Himalaya, Vicco, Khadi, etc. The difference was that these companies focused on their own products’ benefits while Patanjali also focused on disparaging the so-called anti-Indian rivals. That abrasive positioning, once a domain of politicians alone, helped Patanjali be in the limelight. Other brands caught up, thankfully, with the swadeshi/local story and not the abrasive tone, leveling the field.