Media and entertainment revenue to rebound 27% next fiscal: CRISIL Ratings

Revenue of India’s media and entertainment (M&E) sector should script a strong 27% rebound to ~Rs 1.37 lakh crore in fiscal 2022, after contracting ~26% this fiscal. The time to bounce-back to pre-pandemic levels will be relatively shorter for segments such as digital and television (TV), while print, films, outdoor, and radio would take longer.

Credit profiles of large media companies would be unaffected due to strong balance sheets, liquidity, and the revenue rebound, while mid-sized and small ones could see stress, an analysis of over 80 of them rated by CRISIL Rating shows.

Says Nitesh Jain, Director, CRISIL Ratings Ltd, “Advertisement (ad) and subscription revenues contribute nearly equally to the overall M&E sector’s top line, but since the former correlates strongly with economic growth, the pandemic has had a bigger impact on it. Next fiscal, with a strong economic rebound on the cards, ad revenue should grow 31% on-year and subscription revenue ~24%.”

The TV segment – contributing around half of the sector’s topline – has recovered fully and will report healthy growth next fiscal. Ad revenue saw a sharp contraction initially, but recovered swiftly thereafter, aided by the airing of new content, sports events such as the Indian Premier League, and a buoyant festive season. As for subscriptions, TV was resilient even during the peak of the pandemic as people remained indoors.

The print segment – contributing a fifth of the M&E sector topline – is recovering, though at a much slower pace, and should be able to rebound fully only by the end of next fiscal. The print is losing share in ad revenue mainly to the digital segment (refer to chart 2 in annexure). Circulation too, especially for the English language, could see a loss of 8-10%, because of increased preference for e-papers in metros. However, print companies are rebooting their cost structure and accelerating digital adoption to stay relevant.

Films – contributing a sixth to the sector topline – is one of the most impacted segments. But occupancies in theatres should improve with the vaccination rollout and a strong pipeline of content. However, this segment is likely to remain impacted even next fiscal due to social distancing norms and fear of closed spaces.

Other traditional media – radio and outdoor2 – are seeing persisting pain, and will likely take much longer to recover. This is because commuting as well as ad budgets for micro, small and medium enterprises – the key drivers for these segments – will remain restricted even in fiscal 2022.

Says Rakshit Kachhal, Associate Director, CRISIL Ratings Ltd, “Digital has emerged as the medium of choice. The pandemic accelerated the adoption of over-the-top (OTT) platforms, online gaming, e-commerce, e-learning, e-papers, and online news platforms. This has meant the focus of advertisers has shifted from traditional to digital media. We expect the digital segment revenue to grow 14-16% annually over the medium term. Its share of M&E sector revenue is expected to double to ~20% by fiscal 2024 compared with last fiscal.”

Given the sharp impact on revenue, cash accruals this fiscal will weaken for all M&E companies except TV distributors. Credit profiles of the large companies are cushioned by strong balance sheets (with most of the net debt free), while those of small and mid-sized media companies have weakened. More downgrades among the latter led to the CRISIL Ratings’ credit ratio (upgrades to downgrades) for the sector sliding to 0.33 in the first nine months of the current fiscal from 0.75 in fiscal 2020. Liquidity pressure may intensify for them if the recovery in ad revenue is delayed.

That said, there is a silver lining to this cloud, too. M&E companies have adopted aggressive cost rationalization initiatives. Besides, the pandemic-led change in consumer behavior has accelerated monetization opportunities for these players through the integration of digital media into their traditional businesses. Some of these aspects can lead to structural changes in business models of the M&E sector over the longer term. 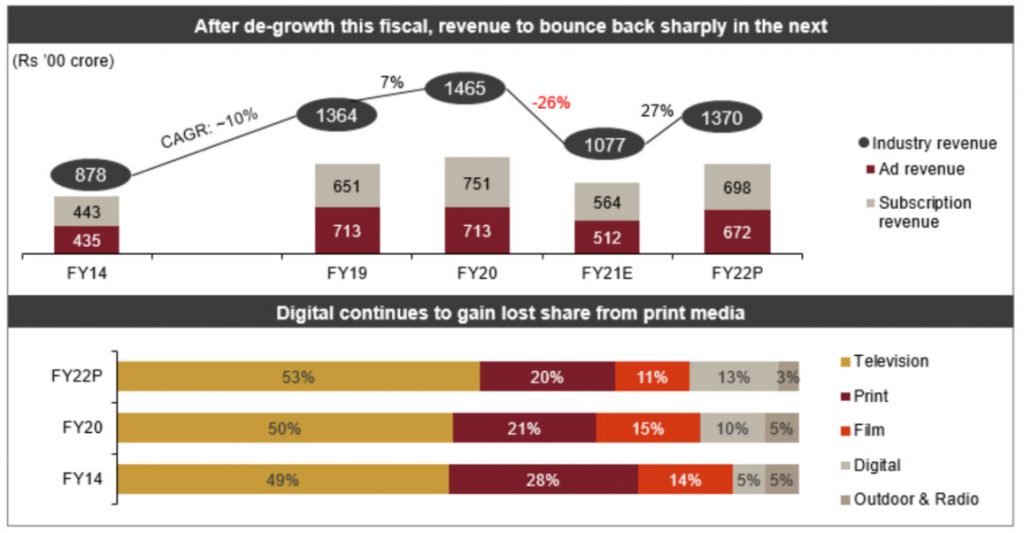 Mumbai: In a global first for Amazon, the country’s largest and most trusted online store, Amazon.in, today announced the launch...

Mumbai: Under the leadership of Akshay Bardapurkar, Planet Marathi completes four glorious years of disruptive innovation in the entertainment industry....

Republic TV expands its footprint in UK with Distro TV

Mumbai: Republic TV, India’s English News Channel, is once again defining the Tv Distribution Landscape, this time in the International...