by Editorial
in Featured, Television
Reading Time: 1 min read
A A

Mirror Now has launched a new campaign, ‘Urban Lives Matter’ committed to championing pertinent issues that impact people’s lives. Representing the voice and issues of every thinking urban Indian, the channel aims to empower every hard working urban Indian a better life they deserve. The robust campaign has kick-started with a series of print ads in leading publications.

The topics raised are: India’s Top Metros pay more than Rs. 10 Lakh crore as Direct Taxes yet their traffic congestion is considered amongst the worst in the world. Urban Indians contribute to over 70 pc of direct taxes and nearly 60 pc of India’s GDP yet their issues are often ignored; forcing them to endure and adjust to an increasingly poor quality of life.

This is in line with the new Mirror Now messaging committed to championing the critical area of Nation building. To speak for the Urban Taxpayer, in a society where the national discourse is most times dominated by rural upliftment. To raise voice so that the best and brightest Urban Indians get their due and are proud of their cities. The channel’s relentless reportage on pertinent issues such as women’s safety, civic apathy in Bangalore transformer blast, negligence of the authorities in Chennai school bus tragedy, dangers of child lock in radio taxis, frequent fuel price hikes, removal of GST from sanitary pads etc., have been crucial in impacting change for the betterment of people’s lives. 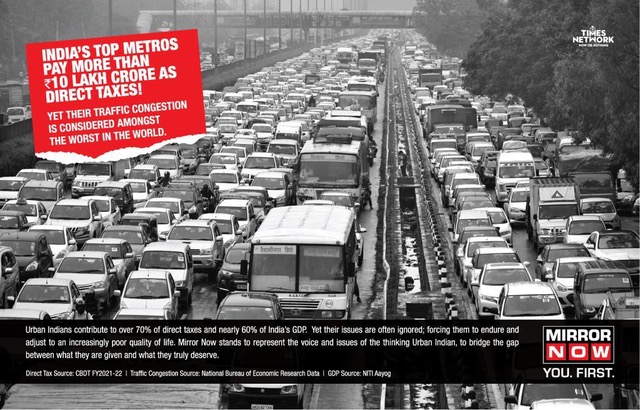