Muthoot Finance is a national brand and digital marketing has always been an integral part of our media mix: Abhinav Iyer

Muthoot Finance- India’s largest gold loan NBFC and India’s No.1 Most Trusted Financial Services Brand on the launched their mega campaign, ‘Sunheri Soch- Season 2’.This is in continuation of their first season, the campaign will be focusing on the theme of Atmanirbharta, highlighting real and inspiring success stories of common people who dreamt big and became self-reliant especially during COVID-19 by availing gold loans from Muthoot Finance. The campaign will entail some truly exciting content specially created for radio & digital modes of communication. Several top online music platforms are also included in this campaign.

In an exclusive chat with Medianews4U, Abhinav Iyer – General Manager, Marketing & Strategy, Muthoot Finance speaks to us on the success of Season 1, the use of radio and digital platforms to reach out to their customers and much more…..

The campaign ‘ Muthoot Finance Sunheri Soch’ is in its second year. How did it perform in Season 1?

Season-1 of Muthoot Finance Sunheri Soch was launched in the middle of the pandemic in June 2020. The campaign and its inspiring content were like a breath of fresh air particularly in those extremely challenging times. Season-1 fared exceptionally well with an overwhelming response in every possible way. We received thousands of new success stories of Muthoot Finance Gold Loan customers who made it big in life with timely help from us during the pandemic. We also received a startling number of new customer enquiries and a very large majority of them even availed a gold loan from us. All five customer testimonial videos and the Sunheri Soch Season-1 Anthem too received overwhelming response with +52 million views on the official YouTube & Facebook platforms of The Muthoot Group and our partners.

The first season of our campaign also helped project gold loans in a more positive light and bring about an attitudinal transformation in the way people perceived gold loans. It helped showcase the product as a quick and smart choice rather than being a last resort. Thus, we did not hold back ourselves in investing again in launching Season-2.

What is the objective of ‘Muthoot Finance Sunheri Soch Season-2’?

Narrated in the charming voice of Madhuri Dixit, the primary objective of this Season’s testimonial based story-telling campaign is to bring the extra ordinary successes of ordinary people to the forefront and motivate countless others to also walk the path of self-reliance & become ‘Atmanirbhar’.  As the campaign progresses and a new story unveils every Monday, you will find these stories capable of igniting inspiration for millions of other Indians to also avail a Muthoot Finance Gold Loan and make their dreams come true.

Can you share a few stories in relation to this campaign?

Well in this Season’s Sunheri Soch campaign you will be witnessing some of the best success stories from different parts of the country that we received last year. You have already heard the story of a successful Mushroom farmer from Delhi last week. In the coming weeks, we will be presenting a story of a gentleman who availed a gold loan from us to start a small school in his village in UP but has today, upgraded it into an inter-college with 600+ students. There is also a phenomenal successful story of an elderly lady from a small village in Rajasthan, who had an urge to setup her own business. She is presently running her an extremely successful dairy business that too at an age when most people would contemplate about hanging-up their boots.  Other stories too are equally inspiring and will reveal themselves as we progress with the campaign. 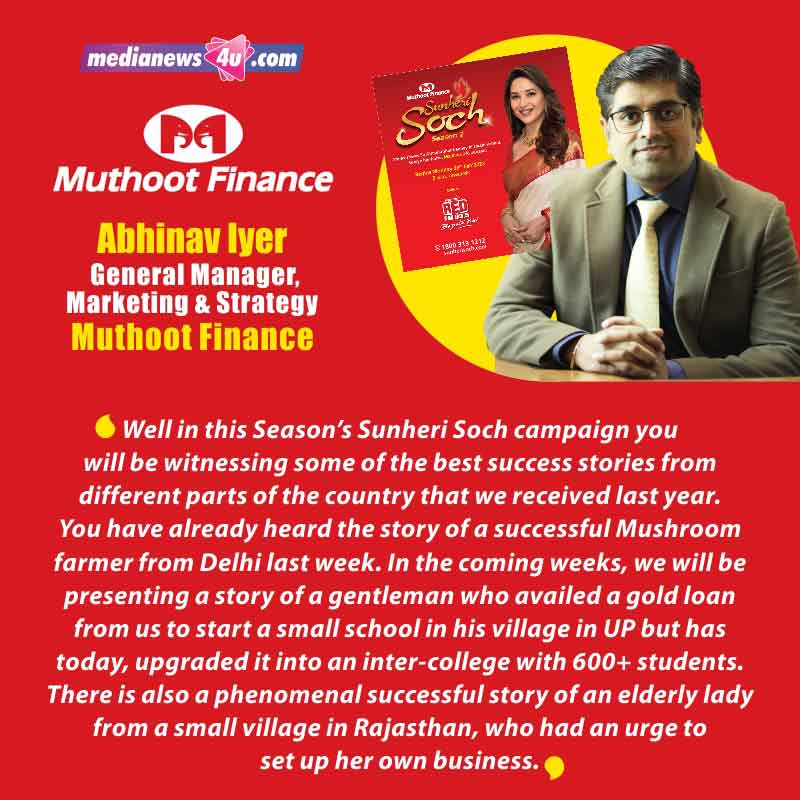 The Marketing strategy for this campaign?

Muthoot Finance Sunheri Soch Season-2 campaign is spread over for 5 successive weeks with a new story being aired every Monday at 9 A.M. only on Superhits RedFM 93.5. The first story was launched on 28th February. These stories will also be repeated multiple times from Monday to Saturday throughout the campaign duration. Along with it, a specially curated digital video for each story will also be launched every Monday which will be showcased on the official Facebook and YouTube channels of The Muthoot Group & RedFM. These digital videos will also be available on www.sunherisoch.com – a dedicated landing page created to host all campaign assets. Interested customers could also call our toll-free number 1800 313 1212 to know more or avail the product.

A special song-music-dance video titled Sunheri Soch Season-2 Anthem was also launched on 25th February – a few days prior to the first story going on air. The heart-warming Anthem features RedFM’s top RJ’s saluting the courage of these inspiring people who succeeded in the most challenging times. 100+ RJs from RedFM will also be promoting the campaign on their social media assets.

A lucky draw contest is also part of this campaign wherein new Muthoot Finance customers could share their inspiring success stories and 30 of them could get a chance to win a 24 Carat Gold Coin. Alternatively, their story could be handpicked to be narrated next Season.

The audio stories and the gripping Sunheri Soch anthem will also be streaming on music channels like Jio Saavn, Spotify, Gaana, Apple Podcasts and RedFM India App to name a few.  The campaign is being promoted extensively on TV, Print, Radio, Digital, OTT and Outdoor mediums.

With digital growth surging, how well are you using the digital platforms to reach out to your customers?

Muthoot Finance is a national brand and digital marketing has always been an integral part of our media mix. Besides traditional mediums, digital has played an important role in helping us reach out to a new segment of customers.

In fact, though we have a strong branch network of 5000+ pan-India branches, we have also diligently worked towards building a strong digital ecosystem by ensuring continuous technological up gradation in our products and services. Today, our customers can also make their interest repayments online through our Mobile App, Muthoot Chatbot, WhatsApp channel, Google Pay, PhonePe or Paytm. They can apply for a gold loan online and even avail a gold loan from the convenience of their home through our Gold Loan@Home service. Customers can also digitally avail loan top-ups on their existing gold loan accounts at the click of a button. Even from a digital marketing investment perspective, we invest nearly 10% of our annual marketing budgets on digital platforms. This too has seen a sharp rise over the last 2-3 years. 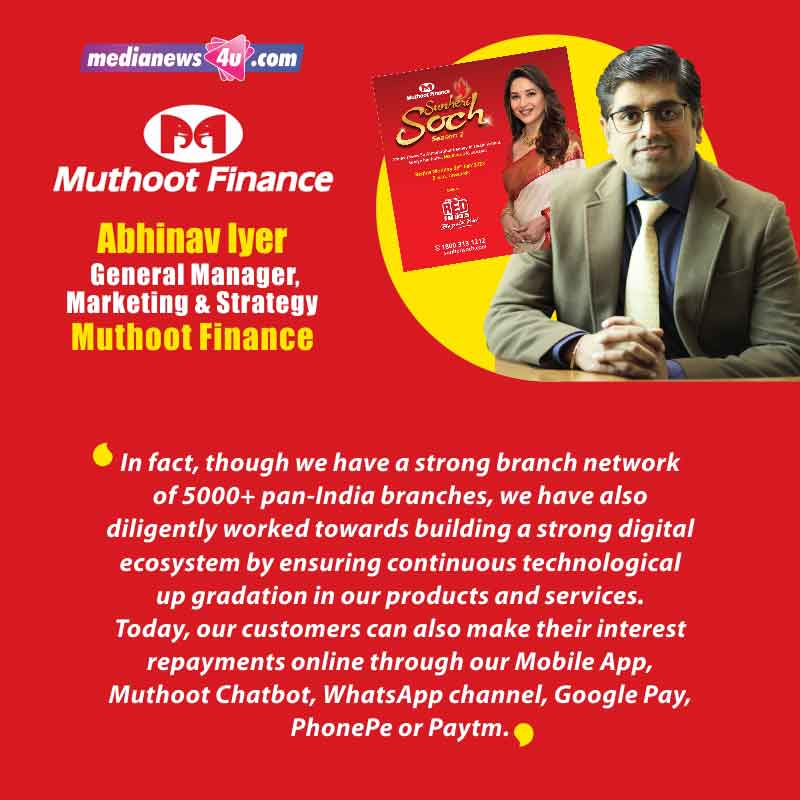 What were some of the challenges you faced during the past two years?

Historically, gold loans have been viewed apprehensively by most people who have never availed it in their life. Hence, first time loan seekers have always had some inhibitions in taking a gold loan. All our campaigns including Sunheri Soch, have actually worked towards addressing and allaying this apprehension. With effective communication campaigns like ‘Gold Loan is Good’ and ‘Sunheri Soch’, this hesitation witnessed a notable change over the last 2 years and many first time loan seekers availed gold loans from us. In fact, during the pandemic, Gold Loans emerged as a hero product across the category. With minimal documentation, instant loan disbursement, quick turnaround time, and various other benefits, Muthoot Finance Gold Loans fared extremely well during the pandemic. 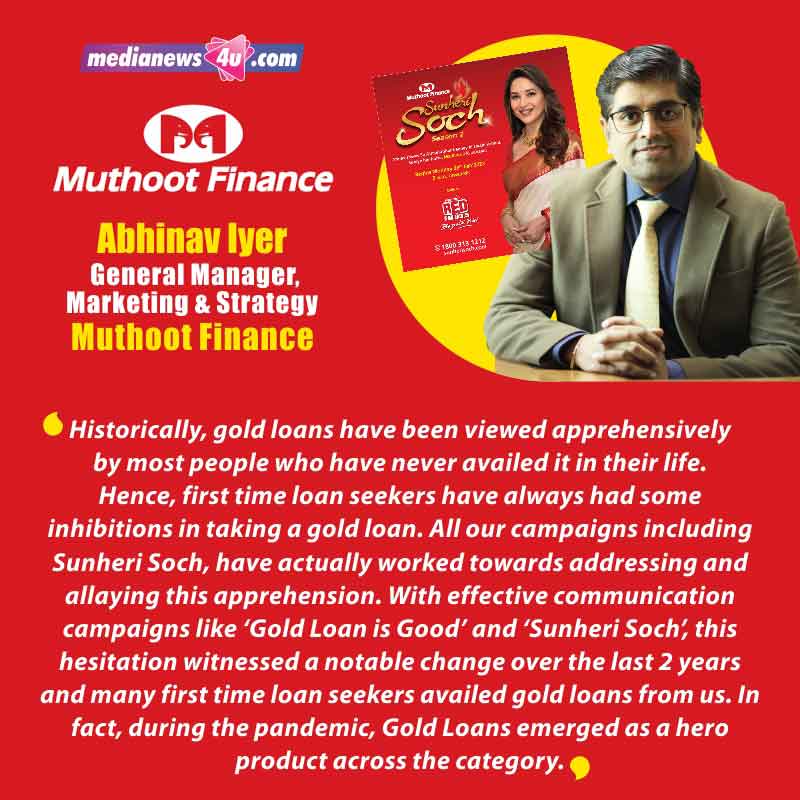 This timely financial assistance through Muthoot Finance gold loans, especially during the pandemic, emerged as an important and handy alternative that helped many to restart their businesses. Individuals, families and businesses equally availed gold loans to attend their immediate needs and meet their requirements.

It is heartening to share that as of 31st Dec’21, our consolidated AUM has grown by nearly 30%, since March’20. Our net profit also increased by nearly 20% from Rs. 3,169 Cr. in FY20 to Rs. 3,819 Cr. in FY21. We remain committed to make healthy and consistent growth in the coming years as well – powered by a strong management direction, dynamic marketing strategy, focused customer orientation, dedicated staff contribution and sustained technological up gradation.