by Editorial
in Uncategorized
2 min read

Mumbai: Ogilvy tops all agencies with 16 SABRE Awards, alongside impressive performances from competition at the Asia-Pacific SABRE Awards in Singapore last night.

Ogilvy India was particularly impressive winning 4 awards from the 16 and the India team also won the Best in Show for its “Where’s the DNA” campaign.

Scott Kronick, Chief Executive, Public Relations & Influence, Asia: “The work our India public relations capability is undertaking to promote DNA testing at crime scenes is extremely important.  I am very proud of this team and thankful to all our partners.   This is the kind of assignment that not only wins awards, but it builds agency cultures and that is what it is doing for us.” 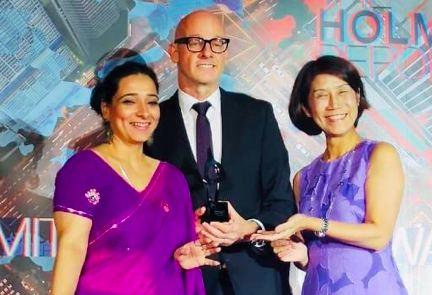 Ogilvy and its clients took home the most – 16 trophies –  the most, and this included 14 Gold / Diamond winners, ahead of BCW (10), Dentsu and Weber Shandwick (7), Adfactors and Current Global (4), Alexander PR and Edelman (3).

Attached is the list of our winning work and below is a link to the SABRE Awards/Holmes Report announcement citing our winning leadership.

Fremantle India is one of the largest and most successful creators, producers, and distributors of scripted and unscripted content in...