A clarification from for the brand’s cheap ads, since banned for promoting rape culture, reeks of arrogance, lending credence to the ‘spit & run’ theory..

How do you add insult to an already aggrieved audience? Layer’r Shot’s PR team can teach you how. The ‘Statement of Clarification’ issued by the company following outrage over its ads, which were banned by ASCI and the I&B Ministry for promoting rape culture, reeks of ignorance or arrogance, or both. It lacks sincerity and is plain tokenism.

Here’s the statement put out by the company on social media: 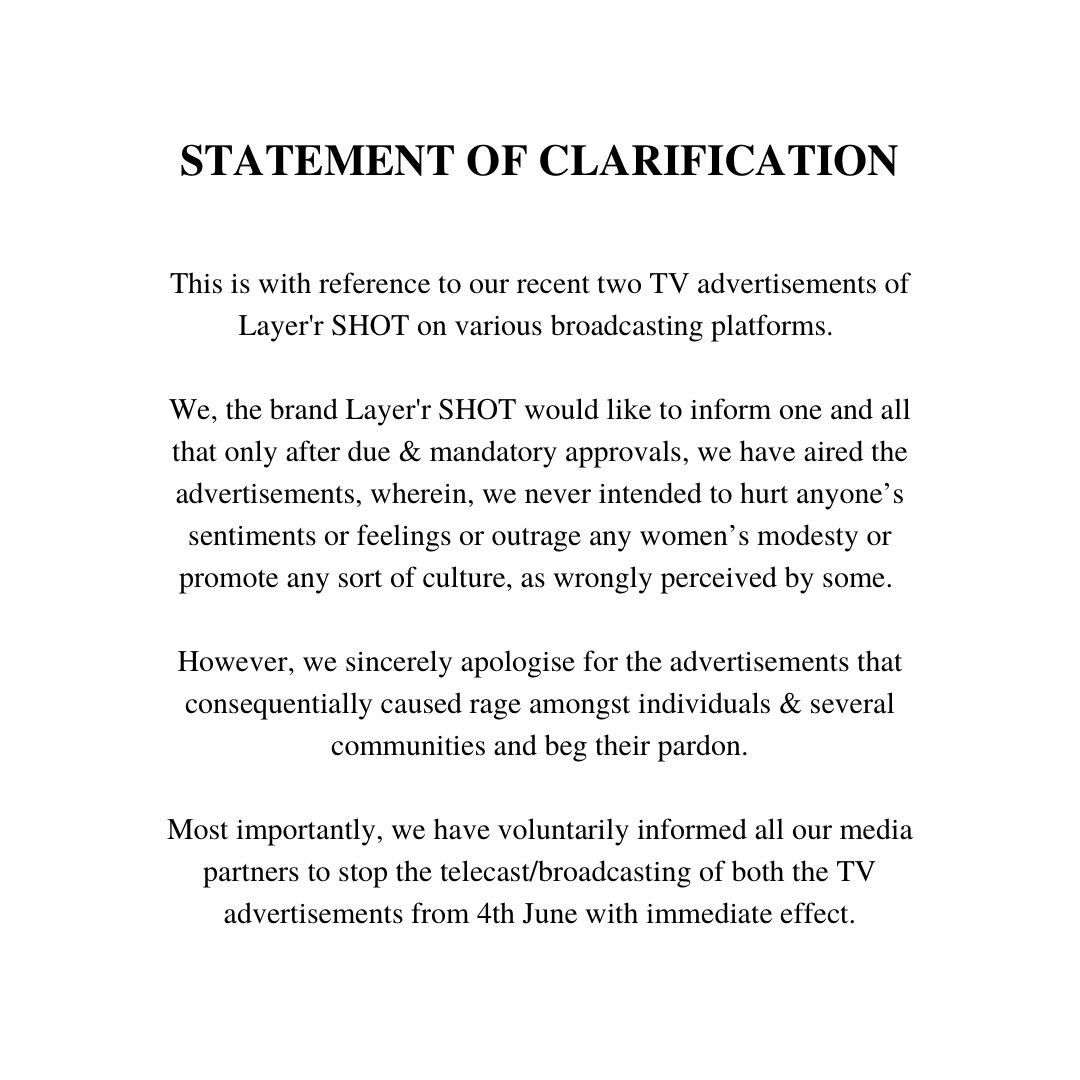 One glance at all the comments made in response to the brand’s Tweet tells us the mood of the nation.

Among points that have incensed people are:

Wrongly perceived? Okay then explain to us what those ads meant 🙂

This takes the cake. If we wrongly perceived the ads, people are asking the brand to explain what it meant to convey with its double meaning ‘Shot’ films.

Never intended to? You thought women would be amused by this ad? Or happy? Or did you not think about women at all?

Wrongly perceived? That’s like putting on onus on people who watched the ad. To begin with, the double meaning was wholeheartedly intended. That’s the very essence of word play/pun or whatever you’re calling it. Please hire someone who can write atleast well worded apology.

The PR response to the public outrage has been pathetic. It is an insult to the intelligence of the reader. It also shows that the brand is not actually apologetic for the ads it put out. That lends credence to the theory that it could have adopted a ‘shoot & scoot’ or ‘spit & run’ approach. Its ads, despite being banned in good time thanks to ASCI and the I&B Ministry, have amassed viral visibility. If one believes any visibility is good visibility, the RoI has been spectacular.

This is not a case of just another insensitive set of ads. It is a new low for Indian advertising, apparently inspired by Bollywood’s idea of adult comedy. Even there, I do not think gang rape has been in the spotlight.

The problem with Shot’s films is that they cross the line into that very dangerous territory. They normalise the notion of outraging a woman’s modesty. How can that be funny? If that is seen as funny by the ones who approved these ads, they need to be cured, with education and retribution.

That retribution cannot come from ASCI or any industry body. It has to come from the Government of India. It is indeed a bad precedent to ask the Government to act on commercial speech. But these ads are an unprecedented low, violating the values of society and threatening its better half.

Indian advertising has improved by leaps and bounds in its sensitive portrayal of genders. Layer’r Shot just pulled the industry back to a new low. This seems like an aberration, thankfully.

But for something like this to not happen again, there needs to be a deterrent from the Government of India. If not, we can be quite sure that someone or the other will take a cheap shot like this again.

(The author is an independent content consultant and marketing columnist.)