The Lockdown due to the pandemic has seen a spike in TV viewership across India, across all genres and News has seen the maximum spike followed by the Kid’s genre.

The lockdown also saw schools shutting down earlier, and schools are not expected to open before July. Though some schools have started On-line classes but that has not stopped them from watching TV.

Summer vacations are big revenue earners for the Kids genre and the programming FPC is well planned. Due to this the Kid’s genre has been able to telecast original content and have also announced new content line-up

The kid’s genre has seen a spike both in rural and urban viewers, what do you attribute this to?

Soumini: With everyone practicing social distancing, people are spending more time indoors. This includes kids and their parents alike. In such a scenario, television and the digital medium become the primary source of entertainment, education and information, leading to an increase in consumption of kid’s content. Since the beginning of March, we have witnessed a growth of over 30% in content consumption on Hungama Kids. While the initial growth came from the metros, we soon started noticing similar growth from other cities as well. The current situation has changed the consumption hours as well. Earlier, consumption on Hungama Kids would remain high on weekends and between 3 pm and 8 pm on weekdays; however, consumption started to remain high from 9 am till 9 pm during the initial days of the lockdown. But as schools moved their classes online, consumption hours slowly went back to their previous pattern. Leena: The trajectory of the channel since its inception 3 years ago, is pretty impressive in terms of numbers but we tanked once the schools started in July-August and bounced back October onwards in terms of market share. The other significant milestone was the NTO which happened last year, with new tariff order everything kind of rebounded with regards to distribution of all the channels in the category saw an upheaval. That basically also proved to be a very significant time for us because we had the strength of the network to back up in terms of pushing our channel on the value pack, i.e the 31 Rs. pack.

Last year during the same time, overall the category has increased by around 10%. You know today only our channel has seen the sharpest growth. In fact, if you look at the data 2 years back, and compare it to last year, the category has remained stagnant. We, as a channel have grown phenomenally.

Channels like Discovery Kids and Sonic also witnessed growth but it wasn’t consistent and was more of a ‘W’ where it came down & went up.  Ours have been actually a constant upward trajectory. For us, the achievement actually happened over the last year, where from the ranking perspective on an All India basis have out of all 52 weeks in a year we have been in Top 5 channels for almost 20-26 weeks. This is a huge feat for a relatively new channel like Sony YAY!. In Hindi speaking markets we have been in Top 5 for almost 3 quarters of the year and in the Top 3 for almost half of the year. Our HSM has kind of been a solid strong point for us and that I think we attribute it to the kind of content that we are feeding our audience and the regionalisation that we have done in the terms of our language.

In fact, we have been moving against the tide in terms of growth. There have been several months where the whole category is flat or negative but we have been way above that mark, for us it has been a great ride. This coming year is going to be a lot about consolidation, entrenching and forming our self-further in terms of time spent and reach and the GRP numbers. So we do not want to do anything disruptive we just want to ensure that our audience and the kids watching us, watch us more and we grow our audience across all markets this entire year. 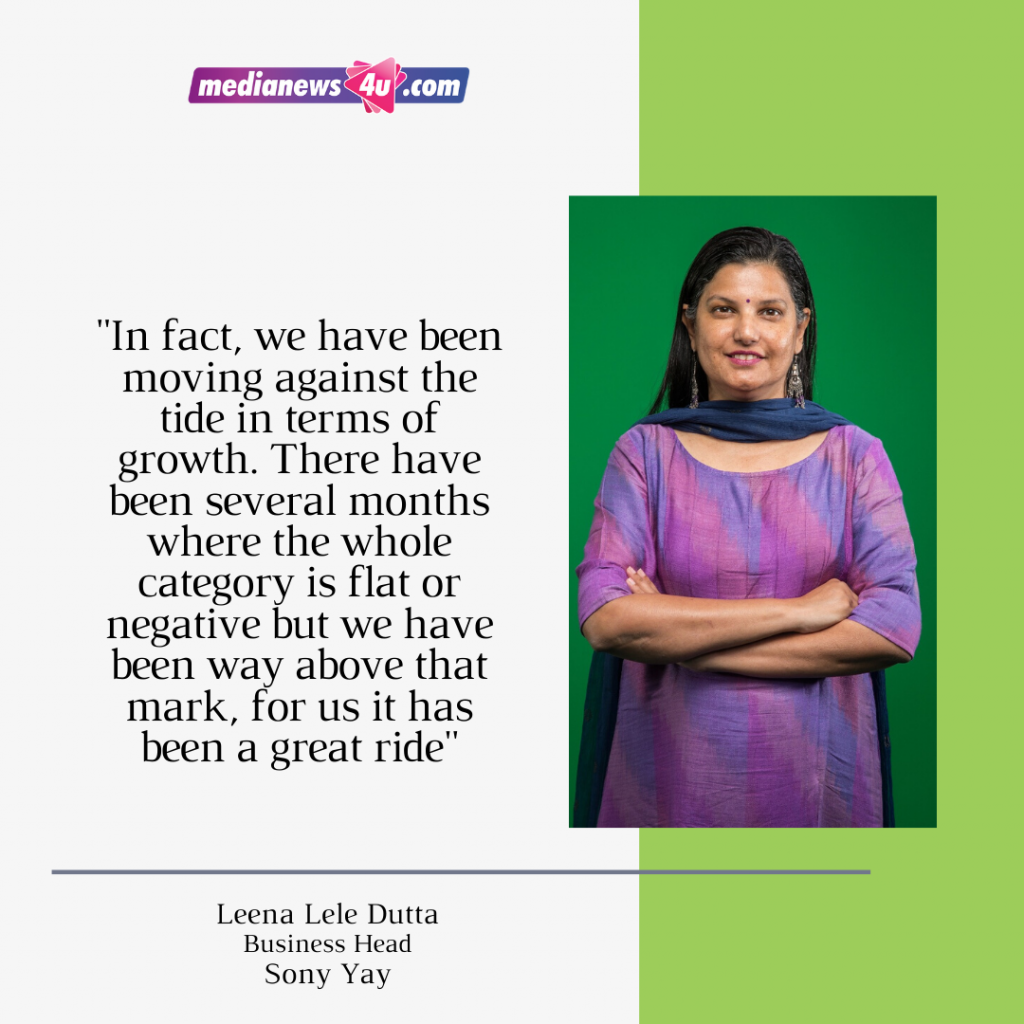 Today kids are also into online schooling. As a kid’s platform, how are you keeping them engaged?

Soumini: On Hungama Kids, we offer separate sections for kids, parents, and teachers. The content is further categorized to suit the needs of different age groups within the kid’s segment, like toddlers, school-going children, pre-adolescents and adolescents, with enough parental controls to ensure age-appropriate content for each segment. Hungama Kids offers a diverse range of infotainment content to engage with the users, from bedtime stories to general knowledge, nursery rhymes to social sciences, and career guidance.

Leena: We have got a whole lot of initiatives that we have planned for on-air as well as online. On-air our regular summer campaign actually, is the one which we usually kick start in March of every year. We did that again this year, co-incidentally it was basically the time when schools also shut, but this year our summer came in earlier and it was quite well-timed. We started off our summer with new episodes and movies of ‘Kicko & Super Speedo ‘and then right now on the channel we have got new episodes of our marquee show Honey Bunny ka Jholmaal along with 13 new movies of Honey-Bunny. For the first time actually we are highlighting and increasing the air time of one hour shows called ‘Paap- O-Meter’ which is the tale of friendly ghosts of ‘ Thakela-Pakela and Bhoot boss’. We have increased the air time of the show because of its genre and how well it goes with the overall theme and genre of the channel which is comedy and fun. We have also introduced a fresh slate of episodes for the show and for the first time we will be featuring a ‘Paap-O-Meter ‘movie.

Our summer plan for on-air started off in mid-March and will go up right until June. So that is almost 90 days of our new episodes & movies on the channel. Apart from that, we created some engaging digital properties as well.

We know for a fact that we have to catch our audience at any point in time wherever they are and with whatever platform they prefer. Besides our on-air offering, we have actually conducted on our YouTube Channel ‘YAY! Summer Camps for Kids’ which will keep them engaged with a lot of DIY personalities. The channel has especially roped in the very talented art genius – Lalon who will be doing a 10 part series on simple yet fun ways to hone one’s art skills using simple things that are available at home. These videos will be hosted across the Sony YAY! Communities on YouTube, Facebook, and Instagram. We also have other personalities conducting Yoga classes, Dance classes, online on our YouTube channel. 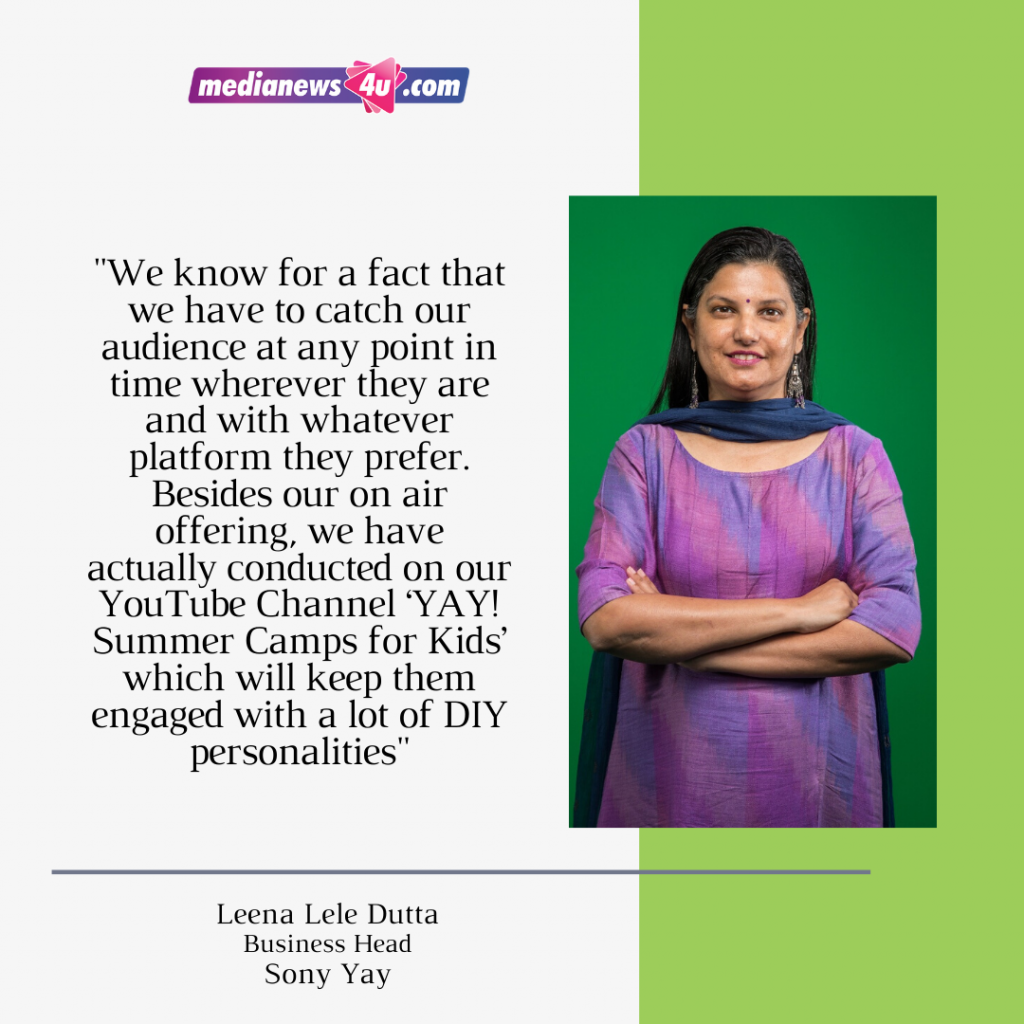 Given the current scenario, how are you marketing the platform to reach your target audience?

Soumini: We believe that our audience, the parents, reside on the digital medium. Hence, we are leveraging digital and social platforms in order to engage with them and increase awareness about Hungama Kids. The diversity of our content for different audiences, availability of parental controls and our commitment to offer infotainment or edutainment content over mindless entertainment, sets us apart from others and is appreciated by our users. Leena: Right now the usual marketing we do is page Pan India and across all small town and we usually do it ,minimum 75 towns and cities and our schools contact program later when school re-opens thing like than but it’s unlikely and rather it’s not possible to do any ATL activation so what we are doing right now is dividing all our funds into massive APL campaign. APL campaign wherein we are going extremely micro and very regional so we are targeting each and every market separately which we have an audio feed in. We are doing a campaign for Tamil Nadu, we are doing a specific campaign in Andhra Pradesh , we are looking at Gujarat as one of the specific market actually going region wise and doing our campaign and our APL activation, communication regarding new episodes of ‘ Honey Bunny ka Jholmaal & Paap-O-Meter’. It is a very market centric media planning.

Recently ZEE5 announced kids content on OTT Platform are you also planning to do something like that?

Leena: We do have an OTT plan which will be aligned with SonyLIV. This will take some time, but yes definitely looking at adding kids will be a very big break on OTT Platform.

Sony YAY! Is reaching out to the right audience?

Leena: Yes, absolutely, but it is not the question that we were not reaching out I think from an audience perspective, Yes it was a TG in the case so, we will reach out. Rural is one of the areas which also had kind of taken off for us in a very big way and the secondary TG for of mothers and the adults. We are ranked 3rd in the secondary TG. So it is an endorsement from the Sony family and coming from the Sony brand name the parents also have that kind of trust wherever my kids are watching I can watch it along with them in Sony YAY! we have sizeable amount of secondary TG and adults TG on our channel. Kids definitely remain our staple diet and we’ve been taking all measures on air and online to our activation to reach out to them in every which way but we have also kind off aggregated audience outside the kids TG which is parents and the ritual audience which extends our brand extend our character across which reaches out to newer audience. 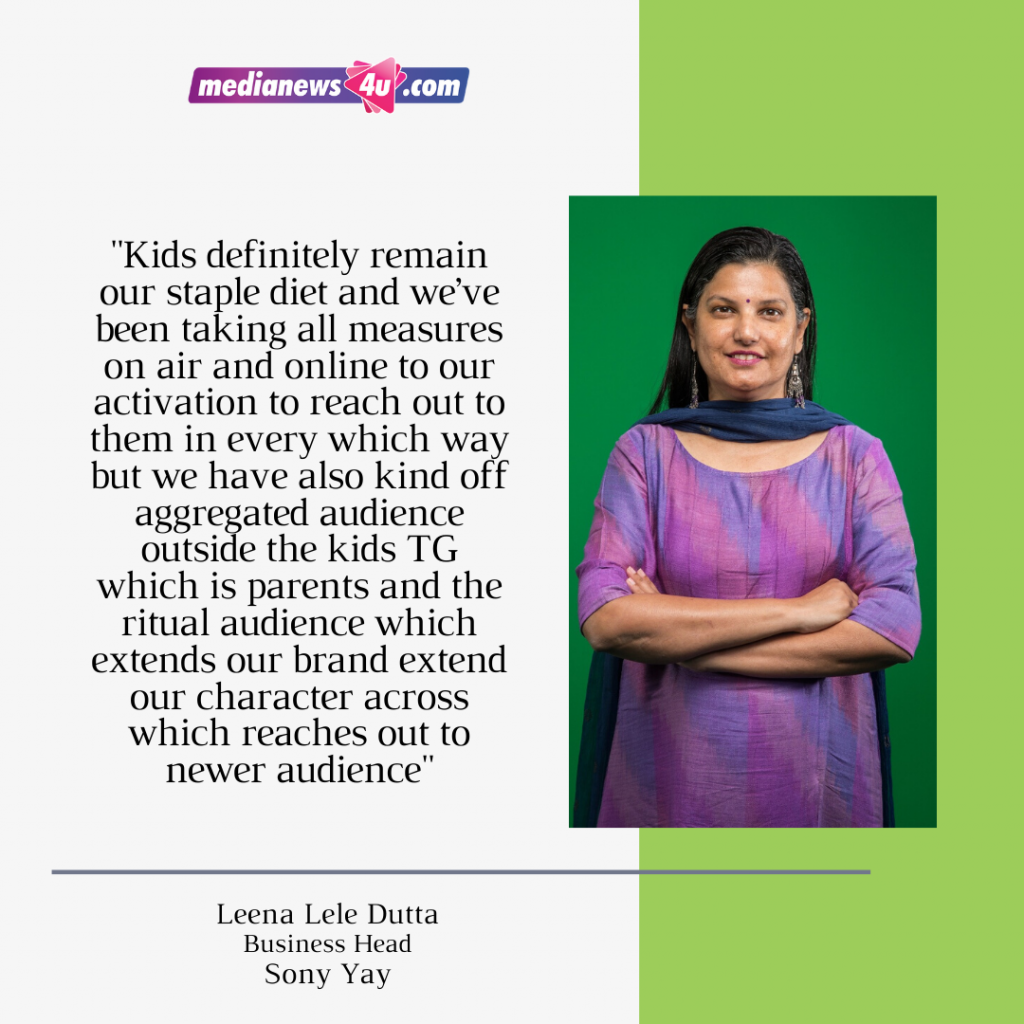