Mumbai: In the new year, media insights and consulting firm Ormax Media is focusing on regional language markets in India. As a first step in this direction, the company announced the launch of its syndicated monthly GEC character popularity tracking tool Ormax Characters India Loves (OCIL) in four regional markets- Tamil, Telugu, Bangla and Marathi. OCIL has been tracking character popularity in the Hindi GEC category since 2010 and is used widely by all channels in the category.

OCIL tracks popularity of fiction and non-fiction characters based on continuous audience research. While the Hindi track is completing 11 years now, the first report of the four regional languages is based on December 2020 tracking, and will now be released every month like the Hindi version.

Commenting on Ormax Media’s regional focus, Shailesh Kapoor, Founder & CEO – Ormax Media said: “In recent years, India’s regional story has been a compelling one. Be it television, theatrical or now streaming, regional content has been attracting the audience’s and the advertiser’s attention alike. 2021 will see Ormax Media launch several offerings targeted at key regional markets. The launch of OCIL in four languages is only a first step in this direction.”

The top fiction & non-fiction characters in December 2020 across the five languages are: 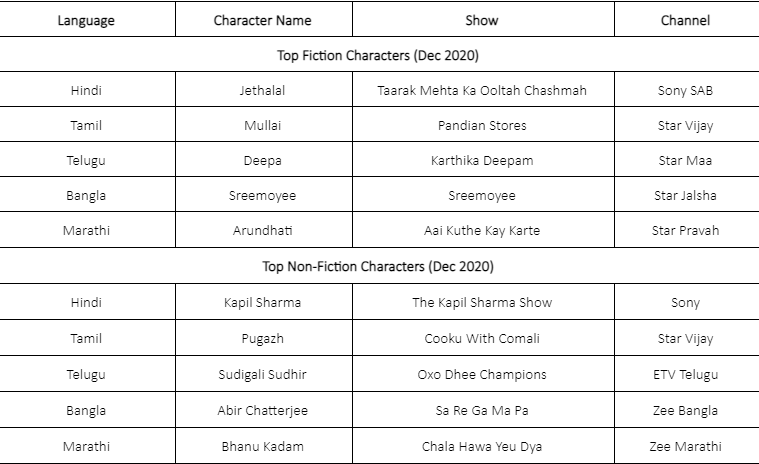 Commenting on Ormax Characters India Loves, Keerat Grewal, Partner – Ormax Media said: “Characters are the cornerstone of storytelling. Character affinity ensures program loyalty, in turn helping shows to have long runs on television. Since 2010, Ormax Characters India Loves has helped leading Hindi GECs build a deep understanding of what makes Hindi GEC characters work. With the expansion into four regional languages, we hope that many other channels will now be able to benefit from similar understanding”.