&PrivéHD is known for its curation of films that allow countless movie lovers to indulge a level deeper and feel the other side of the story. The channel has gone a step ahead in bringing a wider world of entertainment available from across the globe to TV screens. From March 5th onwards, they have launched Weeknights at 9 PM, &PrivéHD presents ‘Privé World Box Office’ a collection of enjoyable, must-watch movies from around the world with familiar themes, varied genres that promise to entertain.

Unveiling the disruptive offering &PrivéHD has rolled out a light-hearted campaign urging viewers to ‘feel at home with world movies, no matter the language’. The campaign depicts a relatable situation in a foreign language through the lens of a typical Indian family.

In an exclusive chat Kartik Mahadev, Business Head, Premium Channels, ZEEL, talks about the channel’s growth, the new launch, and their way forward……

For &PriveHD it has been an eventful 3 years, post NTO how has the journey been?

The regulation change brought about by NTO 1.0; saw the entire category experience an absolute reset. While seemingly daunting at first, it also presented a tremendous opportunity to innovate and deliver value to a more homogenous set of viewers. While the period witnessed a flux in viewership for the entire English genre, it also paved the way for a homogenous set of consumers (subscribers) who are now choosing their English entertainment channels basis the value it provides, just like they do with consumer brands. &PrivéHD has always stood out in the category for its curation of films that allow countless movie lovers to indulge a level deeper and feel the other side of the story. Through our quality content, the channel has resonated with the non-conformists who are on the lookout for meaningful storytelling. To these passionate movie enthusiasts, the channel has always delighted them with a stellar curation of path-breaking movies that are each a must-watch. Our flagship thematic blocks such as ‘The Winning Side’ that features a curation of Academy-Award winning tales, ‘Privé Collection’ which includes compelling tales from a mix of genres, ‘Privé Bookmarked’ that features book adaptations have ensured a constant supply of content that is both inspiring and entertaining. 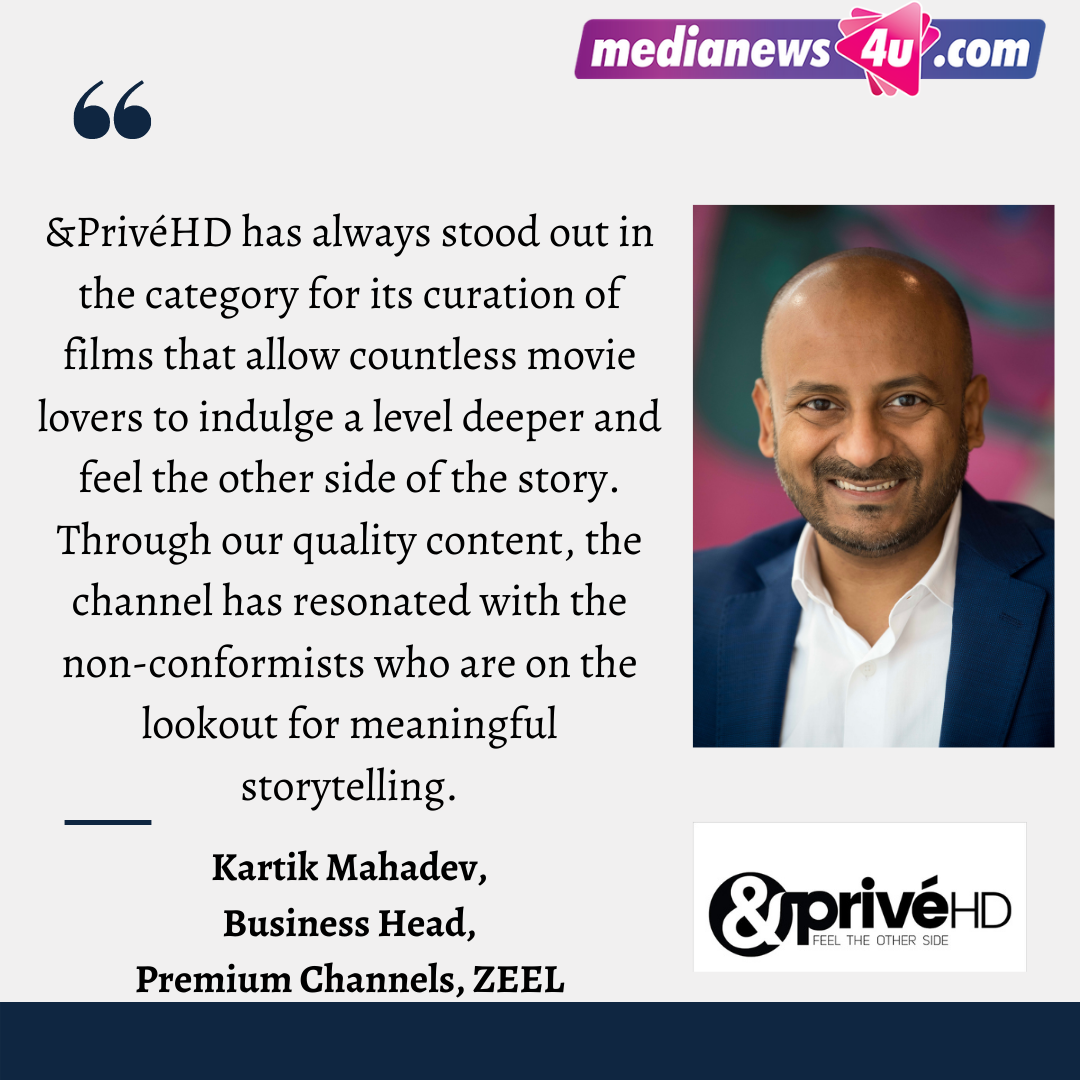 Your campaign ‘Feel at home, No matter the Language’, how has it resonated with your audience?

Given our unique curation, we wanted to communicate how ‘foreign’ can be ‘familiar’ thus busting any myths around the foreign cinema. The campaign has been crafted with insights that aim to bridge the gap between the quintessential Indian film buff and the universal narratives in foreign language films. Thus, we arrived at ‘feel at home, no matter the language’ as the core messaging to bring to the fore a curation of foreign movies with familiar themes that are relatable and enjoyable. Flux @ The Glitch was roped into helm the light-hearted campaign along with JigarFernandes, Third Floor Films, who brought the vision to life with his direction. The film marks the return of the legendary Deepak Tijori along with the evergreen RenukaShahane who bring their expertise along with the new age internet sensation RohitSaraf who brings in his youthful charm. Through the lens of a typical Indian family, the film captures a relatable situation in a foreign language through a fun-filled banter amongst the family. The slice-of-life film brings alive a familiar feeling in various foreign languages, making it an extremely entertaining affair. 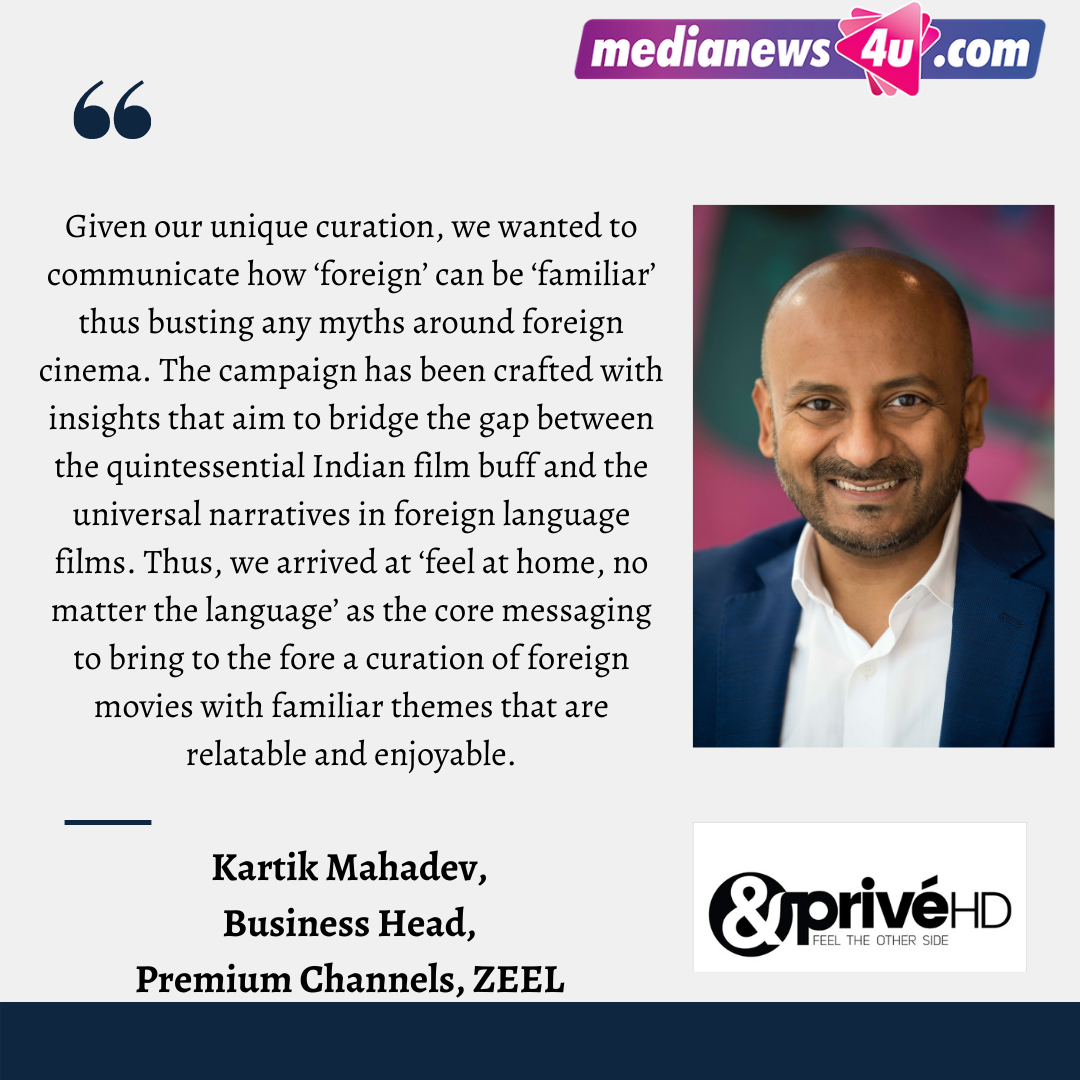 English movies attract a very niche audience. How are you planning to break this barrier and go to the Tier2&3 markets? Today India is a mixture of many Bharat’s. How are you connecting them with your programming?

At a macro level, interest in English content is growing. There is a whole set of the audience moving from regional to English content as they become more comfortable with English as a professional, conversational language. We have designed unique offerings such as World Television Premieres, Multi-Language block, ‘FlixFor All’ on &flix, and locally nuanced content on Zee Café, that will stand out as enablers of bringing an aspirational, English-comfortable audience on board. Moreover, our offering of bringing multiple blockbuster premieres on &flix within months from their theatrical release and in the language of your choice has helped engage with a broader pool of enthusiasts thus fortifying our position across markets. With the growing popularity of Hollywood movies across the country and an aspirational audience looking at movies as a window to the world, we launched ‘Flix for All’ on &flix with top-rated Hollywood movies available in English, Hindi, Tamil, and Telugu. With this, witnessed a +41% jump in viewership when the &flix viewers were given the choice of watching their favorite Hollywood blockbuster movies in the language of their choice. The “Pick Your Flix” innovation allowed our engaged audience to pick the movie of their choice to play on the channel, found great consumer resonance with immense traction across &flix’s social handles with 2X engagement and 3.5Mn reach.

Recently, we also spearheaded the launch of ‘Ticket to Hollywood’, a pan network offering where we combine the might of ZEE to broaden access to Hollywood movies across the width and breadth of the country through a multi-channel, multi-language offering. 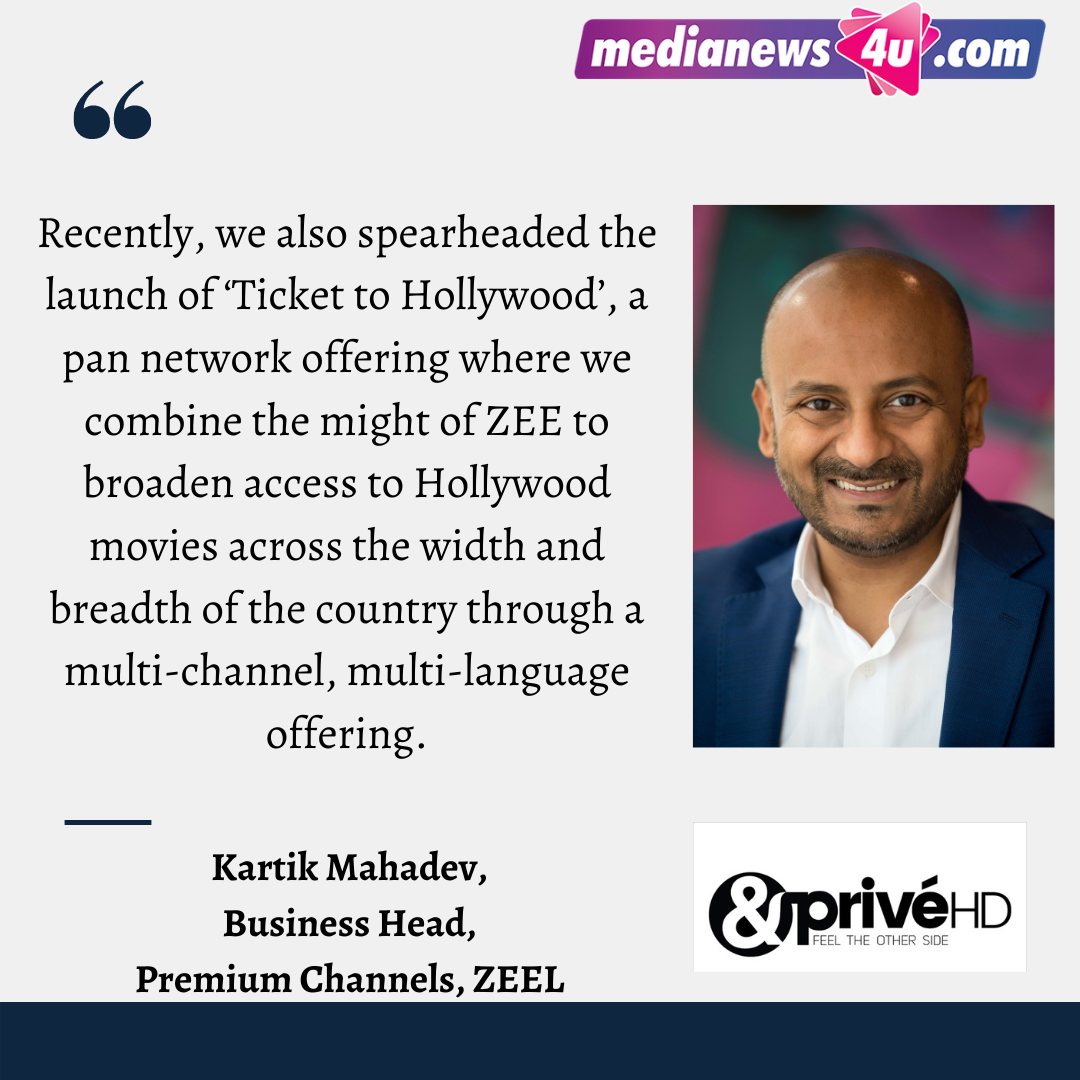 At Zee Café, we have added 300+ hours of content post lockdown, to cater to the growth in walk-ins within the genre. Moreover, we had the original airings of the celebrity chat show Starry Nights GEN Y along with the channel’s first-ever original production ‘Dance With Me’ with celebrity dance experts Shakti Mohan and Mukti Mohan that brought in a local flavor.

Thus, through our unique offerings and locally nuanced content on Zee Café, our continued endeavor will be to bring an aspirational, English-comfortable audience on board.

How were the films curated? What was the thought and strategy behind it?

In a short span of 3 years since its launch, &PrivéHD has come to be recognized as a differentiated channel with an exceptional feed for movie lovers who want a more involved cinema experience through biopics and award-winning cinema. &PrivéHD has built steady subscriber bases who are constantly looking to engage with new meaningful experiences. In the quest for entertaining cinema and exceptional storytelling, cinema lovers occasionally come across foreign films through word of mouth but don’t find enough supply or a clear destination to watch them. With the launch of Privé World Box Office, we aim to solve this consumer challenge through curation of titles from 10 different languages that have been loved by audiences in their origin country. Through this offering, we aim to bust barriers to watching foreign films through a selection that is easy to watch, relatable, and entertaining for movie lovers. Each of the titles as part of Privé World Box Office has been carefully handpicked for curation that promises to make you feel at home with world movies, no matter the language. We are certain that the property is sure to delight our discerning consumers and create value for our customers. The Indian consumer is very discerning and cost-conscious, how are you making sure that the consumer is getting the value for his money?

Our discerning viewers today are looking for meaningful experiences and quality content. Having deeply explored mainstream Hollywood and Bollywood / Regional content, these non-conformist viewers are constantly on a quest to discover fresh and quality content that is familiar and strikes a chord with them. Here’s where the content in foreign languages comes into play and our sole endeavor with Privé World Box Office is to cater to these movie buffs with a curation of must-watch foreign language movies that is sure to make them feel at home. What have been the Marketing & promotional strategy for this campaign?

The rapid and constant change in the traditional media landscape and rising levels of digital sophistication in consumers has led to the emergence of multiple mediums to engage with the consumer. Context has also emerged as a key factor in any integrated marketing strategy. With the COVID-19 outbreak, we have witnessed a surge in television viewership alongside brands engaging on digital through Live video formats. In the English cluster, we have adopted Digital engagement alongside television as part of the channel marketing strategy. For Privé World Box Office, we had a robust 360-degree marketing campaign rolled out across TV, digital, trade, on-ground screenings and bolstered via PR that targets the six metros. Digital has always played a pivotal role in our marketing mix. Through RohitSaraf and RenukaShahane’s social media handles, we teased movie fans with a teaser that intrigued fans and movie lovers. We then released the campaign films that made for a high decibel campaign announcement across digital and TV. The same was followed by snackable content across social media that generated buzz around the offering. Further engaging with fans, we hosted a fun-filled Valentine’s Day activity with RohitSaraf who combined his ‘love’ and ‘love for foreign films’ via Instagram reels. We garnered immense traction via UGC as fans reached out to the actor with their proposal messages in a foreign language. Going forward, we have weekly engagement activities for movie buffs planned around our premieres in the pipeline. Mumbai: Formula E has today announced a new multi-year media partnership with Star India to broadcast the pinnacle of electric...