Kolkata: The Kolkata Police has agreed to support the campaign #StopDomesticViolence Campaign created by Rediffusion and Swayam, a Kolkata based women’s rights organization working since 1995 to advance women’s rights, facilitate women’s empowerment and end violence against women. A drive to generate awareness, the campaign posters will be displayed across all 79 Police Stations under the jurisdiction.

According to Amrita DasGupta, Associate Director of Swayam; “Domestic violence is a deep-rooted structural problem in our society caused due to patriarchy and gender inequality which prevents women from leading a life free from violence and dignity. Through this campaign, Swayam hopes to involve individuals, corporates and institutions to support the #StopDomesticViolence Campaign and help raise awareness around domestic violence.”

Nilanjan Dasgupta and Piyash Ghosh, EVP& ECD, Rediffusion, said- “During Covid 19 lockdown, incidents and reporting of Domestic Violence increased by 20-70% across the world and the National Commission for Women reported a twofold increase in Domestic Violence reporting in India. UN Women recognized this situation as a ‘Shadow Pandemic’. The lockdown has hugely exacerbated the incidence and intensity of violence faced by countless women and girls, both in their parental and matrimonial homes, as they are locked in with their abusers 24×7. Even after the lockdown has been lifted partially, many women still cannot approach Swayam due to the COVID 19 pandemic, limited public transport, no access to money, and difficulties in the home situation. We hope the #StopDomesticViolence campaign will help us raise awareness about the shadow pandemic and help survivors of violence reach out for support.” 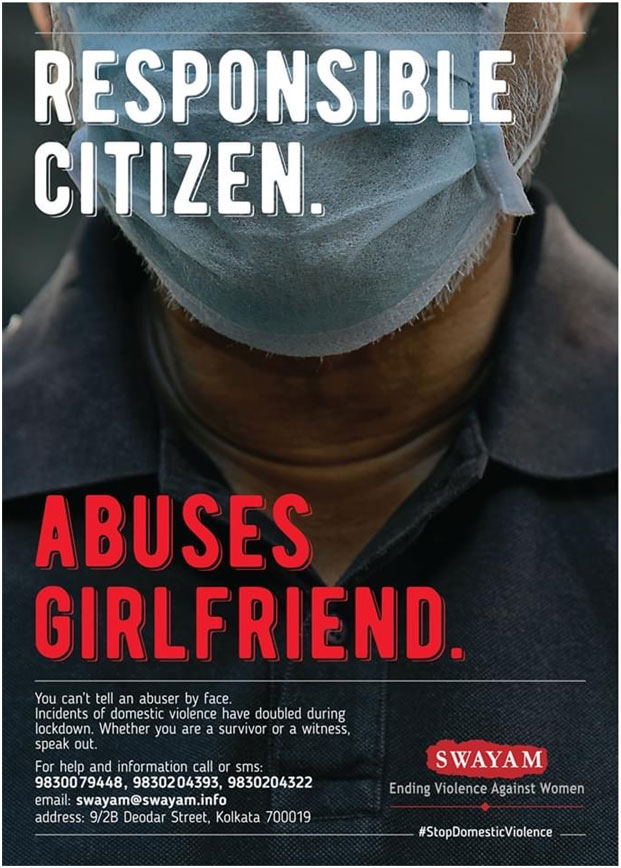 Since the launch of the campaign, #StopDomesticViolence Campaign, Swayam witnessed a 183% increase in new referrals in June 2020 compared to June 2019. There has recorded a significant increase in the number of new women approaching the NGO.

Close to 290 individuals and organizations have shared this campaign in three different languages in India, Bangladesh, and the USA.

The final campaign in three languages (English, Bangla, and Hindi) was launched between 9th and 11th June on Swayam and Rediffusion’s social media handles.
#StopDomesticViolence Campaign highlights different forms of Domestic Violence and underlines that men who abuse come from all socio-economic backgrounds. There are men who may superbly present themselves as publicly upright and responsible citizens, but have a vastly different persona at home!

Some reactions from social media:

• A social activist from Jharkhand shared; “These are super posters all focusing on the hypocrisy that exists in large, but never so evident. Really thought-provoking.”
• A leading National level mental health advocate shared, “This is so cool, stunning, so well-conceived”
• One of the leading human rights and women’s rights lawyer/activist in India shared that the campaign was powerful.
• A leading social and women’s rights activist in Bangladesh shared, “saying it as it really is! I hope this campaign truly helps expose hypocrisy!”
• Shiva a leading social activist at Georgetown University, USA shared the campaign on her Facebook page and added, “SWAYAM — and so many others at home doing the critical work — that has been around for centuries. When I was growing up, this was not even considered an issue.”

Maharashtra: Hitesh Tulaskar is a Creative Director with more than nine years of experience in advertising. He joins FreshBox Media,...