The year 2020 saw the worst pandemic and the ensuing lockdown with the broadcast industry being the worst hit with no fresh content. In July 2020, the government gave permission for shootings and the industry slowly limped back to normal and Star Network gained the most across genres and languages. The Dream 11 IPL 2020a tent pole property, opened successfully on Star Sports Network with the first match delivering around 30% growth over the past year. With fans enjoying matches from the comfort of their homes, Dream11 IPL 2020 set a viewership record with an overall consumption increase of 23%*versus 2019. Television viewership reached an outstanding 31.57 mn** average impressions.

Capitalizing on the regional appeal, five independent language channel offerings – Hindi, Tamil, Telugu, Bangla, and Kannada, contributed immensely to the increased viewership growth of Dream11 IPL 2020. The regional offering across languagesreceived well by viewers and increased the viewership by 28%# over IPL 2019.

In an exclusive chat with Medianews4U, Gurjeev Singh Kapoor, President – TV Distribution, India and International, Star & Disney India, speaks about his role in expanding Star’s footprint and accelerating the distribution agenda for India. He has also moved the international business from strength to strength – currently, Star is available in over 109 countries. Gurjeev talks about the increase in subscriptions for Star Sports post NTO and how the sports landscape in India has moved from Cricket only to other sports like Pro Kabbadi, Football league.

The implementation of NTO was a tectonic shift in the Broadcast industry as distribution head what was Star’s strategy?

The New Tariff Regime has been a pioneering event for the entire TV broadcast industry because it helped enable consumer choice by introducing retail pricing. At Star, our endeavour was to spearhead the transformation of the business and strengthen the network’s presence across the country. We rolled out segmented channel bundles with affordable pricing and attractive packaging options to cater to all segments. This was done keeping consumer needs in mind and ensuring that they continue to have access to the best of entertainment from our network. 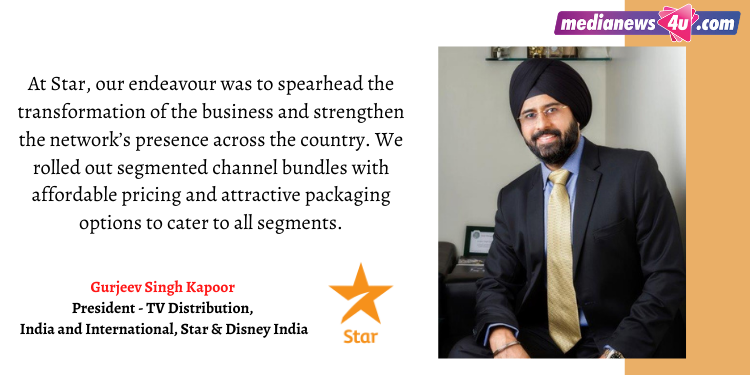 The consumer had an option of choosing the channels, what was the rise in Sports viewership immediately after NTO and now?

Sports and especially Cricket have always enjoyed high viewership amongst Indian viewers. After the New Tariff Order arrived, we endeavoured to ensure Sports continued to be accessible for the Indian audiences and therefore made it available along with our value packs to provide a holistic range of entertainment to our viewers. 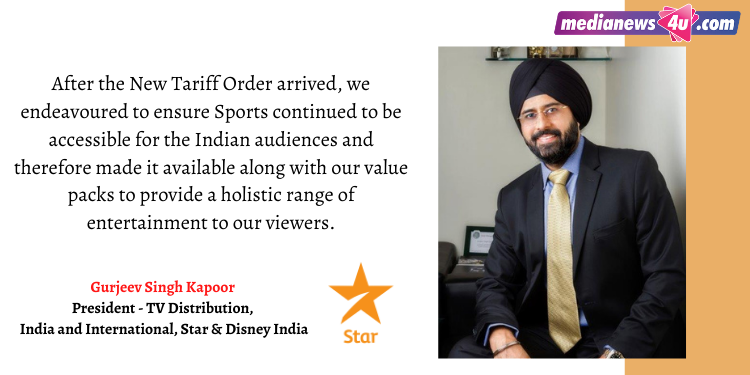 As a result of our efforts, sports subscription and viewership has seen healthy uptake year on year, especially during marquee properties like IPL.

How would you compare the subscription on the basis of Tier 1&2 v/s Tier 3&4?

We have seen strong growth across all the segments on the back of our two-pronged strategy. The first has been the localization of the Star Sports portfolio in regional languages, and the second is the value-driven pricing strategy that has enabled mass adoption of the Star Sports portfolio. There is a distinct Star Sports offering for various markets which has helped us strengthen our presence across semi-urban and rural segments, in addition to the metros. 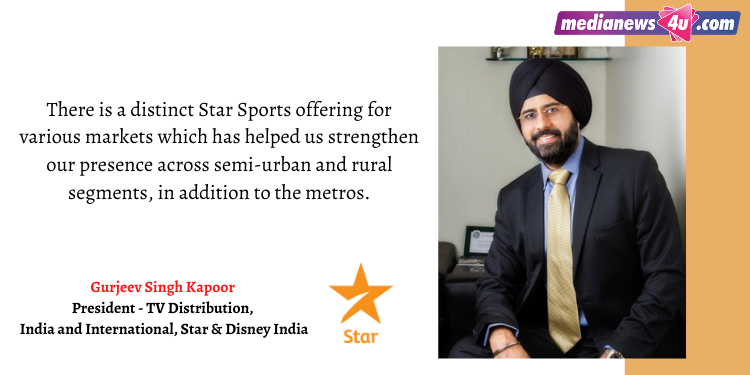 What is the viewership you see at IPL v/s Test Cricket?

IPL is one of the most awaited cricket tournaments every year and each one is bigger than the previous editions. There is no direct comparison as the formats are very different, bilateral series draws in cricket aficionados and IPL appeals to a larger set of audience. There is high interest in current India vs. England series post the remarkable Australia win. India is poised well and has already secured a win with its outstanding performance on the field and the fact that the test series will also decide India’s participation in the World Test Championship only adds to the viewer’s interest and excitement. What is the response for the on-going India Vs. England?

India’s favourite sport, Cricket, is back on Indian soil with the India vs. England series, where we are playing the current world champions. And as you are aware, the current sentiment of the nation is one of resilience, and the eagerness of fans to welcome their favourite cricket heroes has been well captured in our campaign ‘India TaiyyarHai’.

As Star are you betting on subscription purely on Cricket or on the other sports like Kabaddi / Football / Badminton etc?

Historically, cricket draws the maximum eyeballs and subscriptions year on year. But, India is now slowly transforming into a multi sporting nation with a growing public interest in varied sports, and, for years now, Star Sports has been a key catalyst of this welcome trend. So, while cricket is deeply ingrained in the Indian fabric, we have also seen the rise and success of domestic leagues such as the Indian Super League, Pro Kabaddi League, and more. We have also worked with the Ministry of Youth Affairs and Sports on providing ‘Khelo India’ a platform to young athletes at the grassroots level and help strengthen the sporting culture. 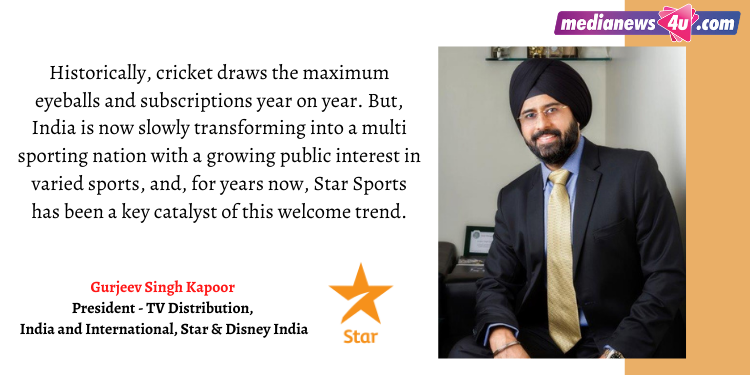 Star Sports has a strong sporting calendar this year with IPL, ICC World T20, Asia Cup, Wimbledon, Premier League, and more, offering something for every sports fan in the country.

Domestic non-cricketing leagues like PKL and ISL have been instrumental in sustaining sports viewers’ interest throughout the year along-with Cricket. So, our priority is to make the best of diverse sports programming available to our viewers.

Can you give an average of subscription between HD Vs. SD?

Sports fans enjoy watching their favourite sport with absolute clarity, experiencing the depth and detail of every action, offered best by HD channels. The aspect ratio of the resolution of the broadcast is 5x sharper and combined with that, the 5.1 Dolby Surround sound gives the viewer the remarkable semblance of watching the match with an in-stadium-like experience.

Right now, around ~10% of total sports subscriptions are in HD. Of course, SD is a huge driver of growth, and we are working to enhance viewer delight by informing and making them aware of the enormous superiority of the HD viewing experience. We offer both SD and HD versions of Star Sports 1 at INR 19(a la carte) and viewers can avail a better experience at the same price. 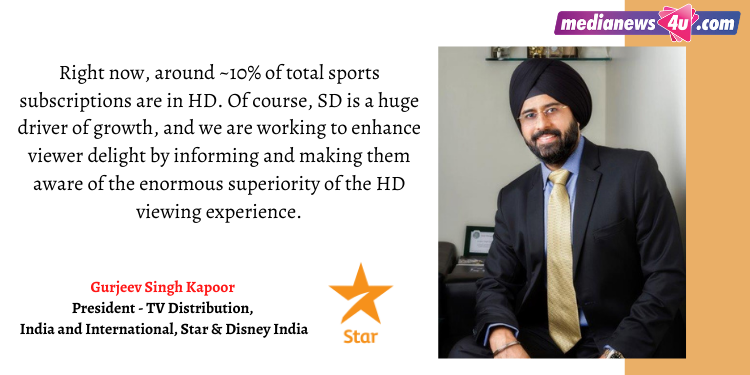 Many viewers moved to Disney Hotstar when NTO was introduced, did it affect TV subscription?

‘TV vs. OTT’ is a common perception; however, it needs to be ‘TV and OTT’. While the video streaming space is a very exciting medium, it is at a nascent stage.  Television is a habit in households and will continue to be a family entertainer. For instance, the Dream 11 IPL 2020 season saw Star Sports achieve something truly remarkable. It propelled sports penetration by growth of ~10%, to a high total of ~80%. Out of 10 pay homes, as many as 8 had a Star Sports connection on their TVs. 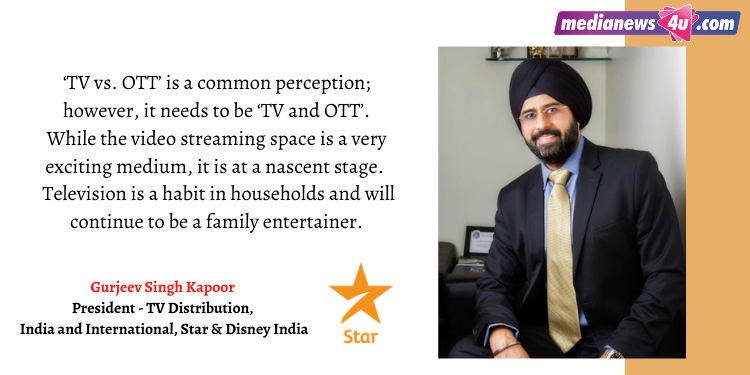 Now thanks to Star Sports in various regional languages how much of an uptake are you seeing in rise of subscriptions?

Regional language markets are the high-growth frontiers for linear broadcast, and sports is a massive driver, considering its incomparable appeal in India. More and more people prefer to consume television content in their regional languages. Cognizant of this important fact, we have focused on regionalisation of Sports, to enable viewers to watch it in, their preferred language. So, we have a total of six language feeds for Star Sports, which include four regional languages apart from English and Hindi. The affinity for sports in local languages has been best seen in the southern markets, like Tamil Nadu, where SS1 Tamil penetration is close to 90%, and Andhra Pradesh and Telangana, where SS1 Telugu is close to touching 80% penetration. 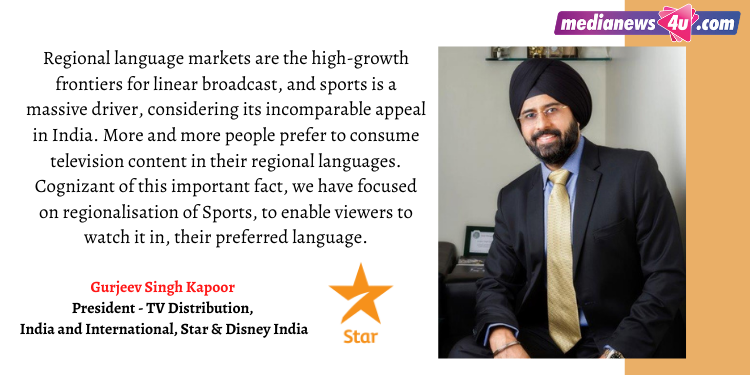 How different is the International viewership as compared to Indian viewership when it comes to Sports?

A sport is one genre that engages and unites fans everywhere. However, when it comes to market dynamics, India is a price-sensitive market, and affordability is one of the biggest factors that is helping grow subscriptions. 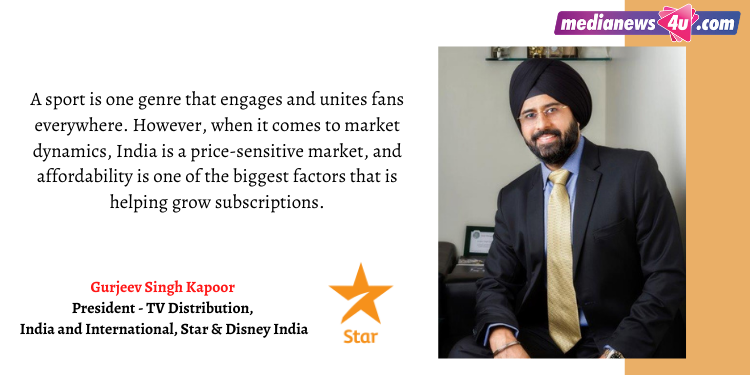 Comparatively, in International markets, what we see is a plethora of properties around which a dedicated and niche fan community is built. These die-hard fans are so deeply involved that they are willing to pay a premium to be able to access and watch these tournaments through a TV subscription.

New Delhi: The Nickelodeon franchise entertains millions of young fans across India and continues to be the undisputed leader with...

ZEE Biskope is all set to regale its audiences with the exclusive world television premiere of Bhojpuri movie Prem Pyaar Mein on Sunday,...

Mumbai: Test cricket has occupied a special place in the hearts of every cricket afficionado. For the past 144 years, the...

Brands strike a chord with emotional campaigns on Father’s Day