What a dramatic change the past one and a half year has brought to our lives, whether it is the business or for us human beings. Businesses, jobs, saw great upheavals, the world also saw a tectonic shift in the way we communicated, what we watched. For most of us, family time has become very important. The digital platforms have seen a surge and also how broadcasters have taken a view on kid’s content which now is curated for family watching.

During the lockdown the GEC had no fresh content; the Kid’s genre curated its best content to keep its audience entertained in the time of gloom and doom. Many of them also came up with fresh IP’s and the newer shows are not only for kids but for the family as a whole; young parents are bonding with their kids and spending quality time with them. Many channels have produced homegrown IPs which encompass Indian culture, celebrate Indian diversity, and also the rich Indian history and culture.

Today we spoke to Ronojoy Chakraborty, Head- Programming, Sony YAY!, Tanya Shukla, Programming Head, The Q, and Anish Mehta, CEO of Cosmos Maya, on the growth of the animation industry in India, local IP’s and content curated for family viewing…

The growth of the animation industry in India

Ronojoy: The Animation industry has come a long way in India and has grown from strength to strength over the last decade. As a matter of fact, all leading broadcasters are now into local animation creation with the industry today reaching out to around 74 million kids. While the Y-O-Y growth for the category being at 8%, we, at Sony YAY, who’s been the latest/last entrant, have grown by 42%. If you compare the numbers over the past 3 years, the category has grown by 26%, while we have grown by a resounding 150%. What has worked for us and played an instrumental role in reaching where we are today is that we’ve been into original content production right from the very beginning. By consistently producing local IPs and partnering with local studios, we have continued to raise the bar in the animation industry. We have partnered and worked closely with around 15-16 studios, which are based out of different cities in the country. Some of these major studios include Wackytoon Studio which is part of Greengold, Moons Animation, High Tech Animation, Cosmos Maya, etc. We’ve worked and partnered with these renowned studios that are known in India for their local production. Add to that, we’ve also worked with smaller studios, over the last five years. 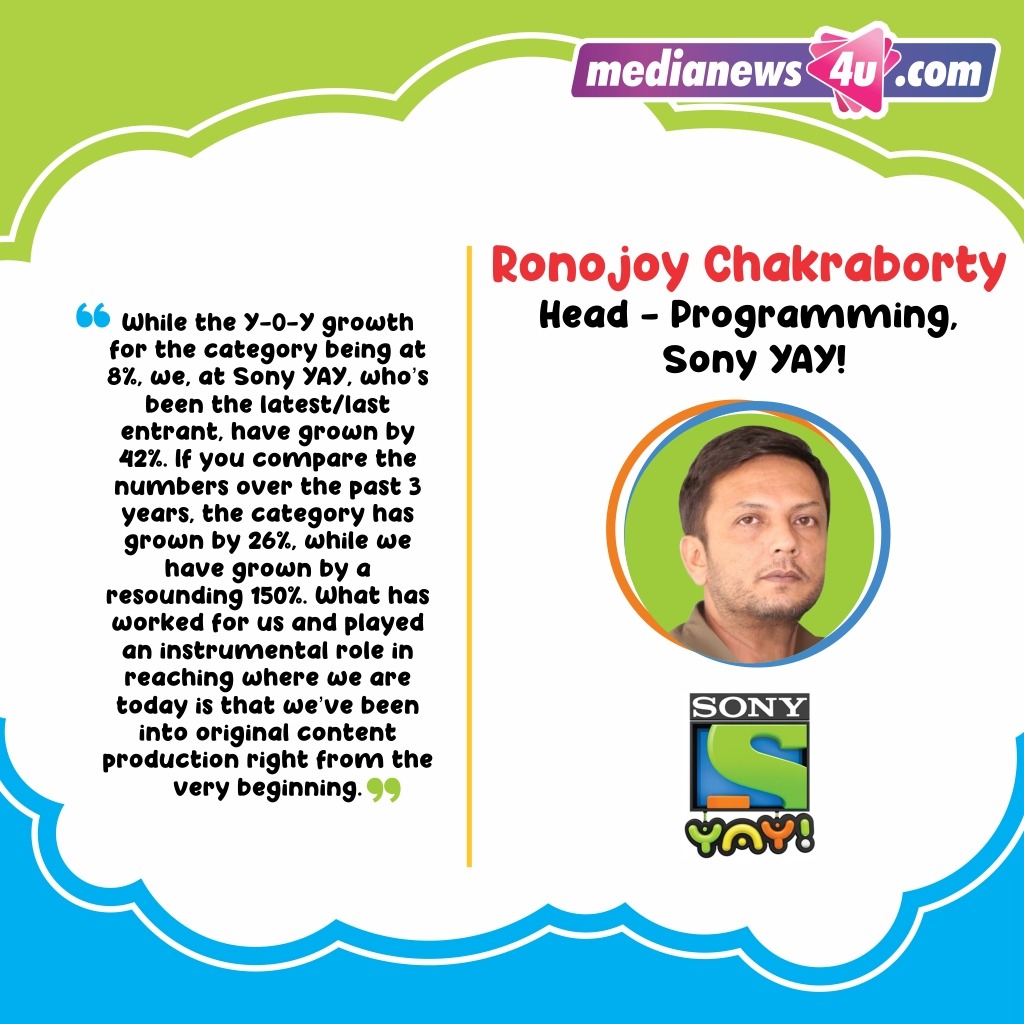 Tanya: Story-telling today is the key for audiences across the board on all platforms. There is already ample content out there but only the best-told stories find stickiness.

Anish: The industry is witnessing growth on every platform and across a plethora of genres. The genre has a consistently growing presence on domestic TV, and with the OTT boom of the past few years, animation producers have made the most of the dual monetization model – where the content releases with a TV and OTT partner simultaneously – as animated programming rarely facing the same kind of restrictions as that of live-action programming. There can be no better reflection of the increasing scope of this business in India than the fact that 14 out of 20 top-rated kid’s shows on domestic TV are local productions.

Ronojoy: I don’t think it’s the case anymore. I firmly believe that it’s a powerful and potent tool to put across a message and people have realized it as well. Today, there are animated movies that cater to both kids as well as adults. This conviction inside me stems from the fact that we recently launched a show titled Taarak Mehta KkaChhotaChashmah. This offering is based on the characters of the show Taarak Mehta KaOoltah Chashmah, but entirely done for kids. The concept is completely different, although it’s in the same comedy space. That said, we garnered a tremendous 10mn adult viewers within the first three weeks of the show’s launch. This is a strong testament to the fact that animation is being accepted by adults and kids alike. The perception/notion that cartoons are only for kids is fading away, especially with the content in the animation industry maturing over the past few years. The age group, who have grown up watching these shows, have now moved to a different category of viewers. They are now teenagers and young adults, who accept animation as a form or medium of entertainment that is not restricted to only kids, but adults as well. There is more acceptance of animation in India now. 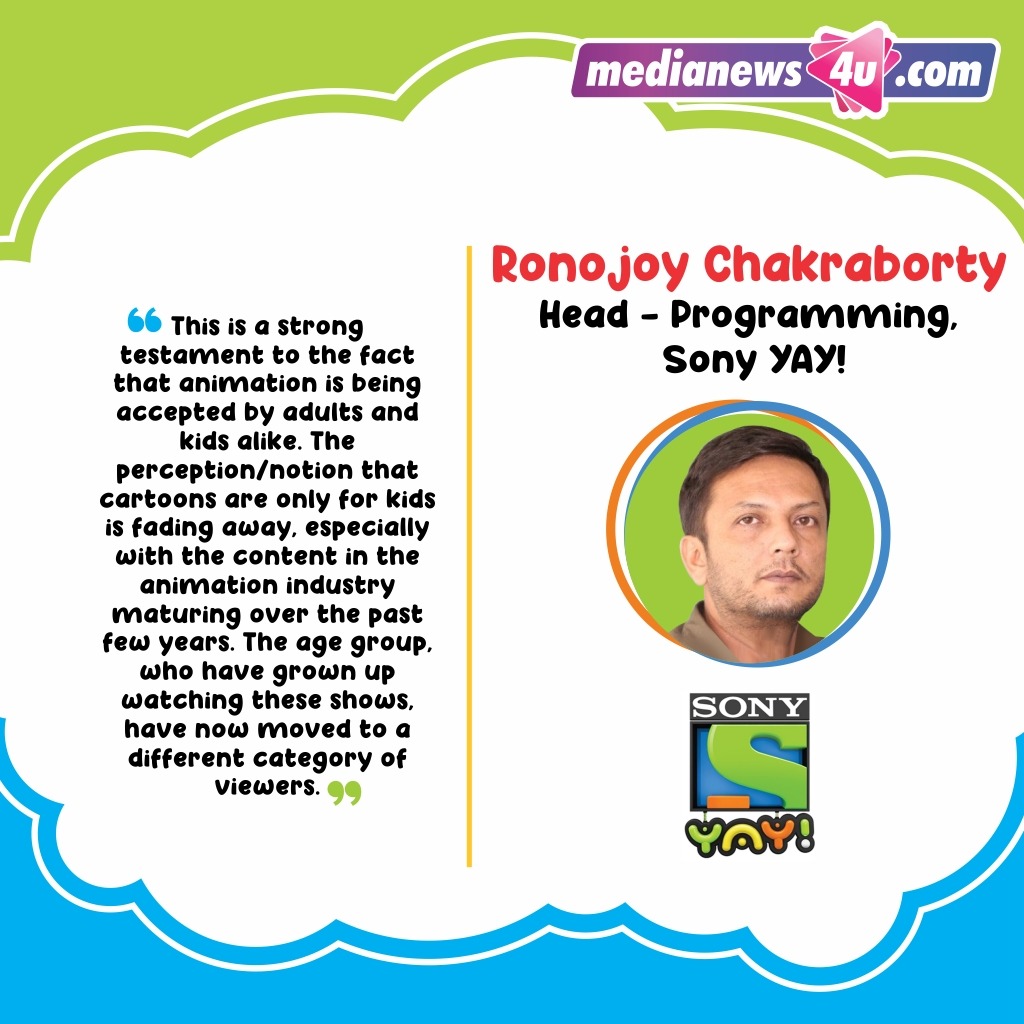 Tanya: Animation is definitely no longer only for kids because there is a lot of exciting animation content available for young adults and adults. Animation content that we showcase on The Q like DilchaspKahaniya, GazabKahaniyaare very interesting stories which are in fact inclusive to the entire household. DilchaspKahaniya is a series showcasing everyday family life, job issues, relationships & community living, very much like a mainstream drama series. Gazab Kahaniya is an animated horror series but for adults and the same goes for Daravni Kahaniyan. 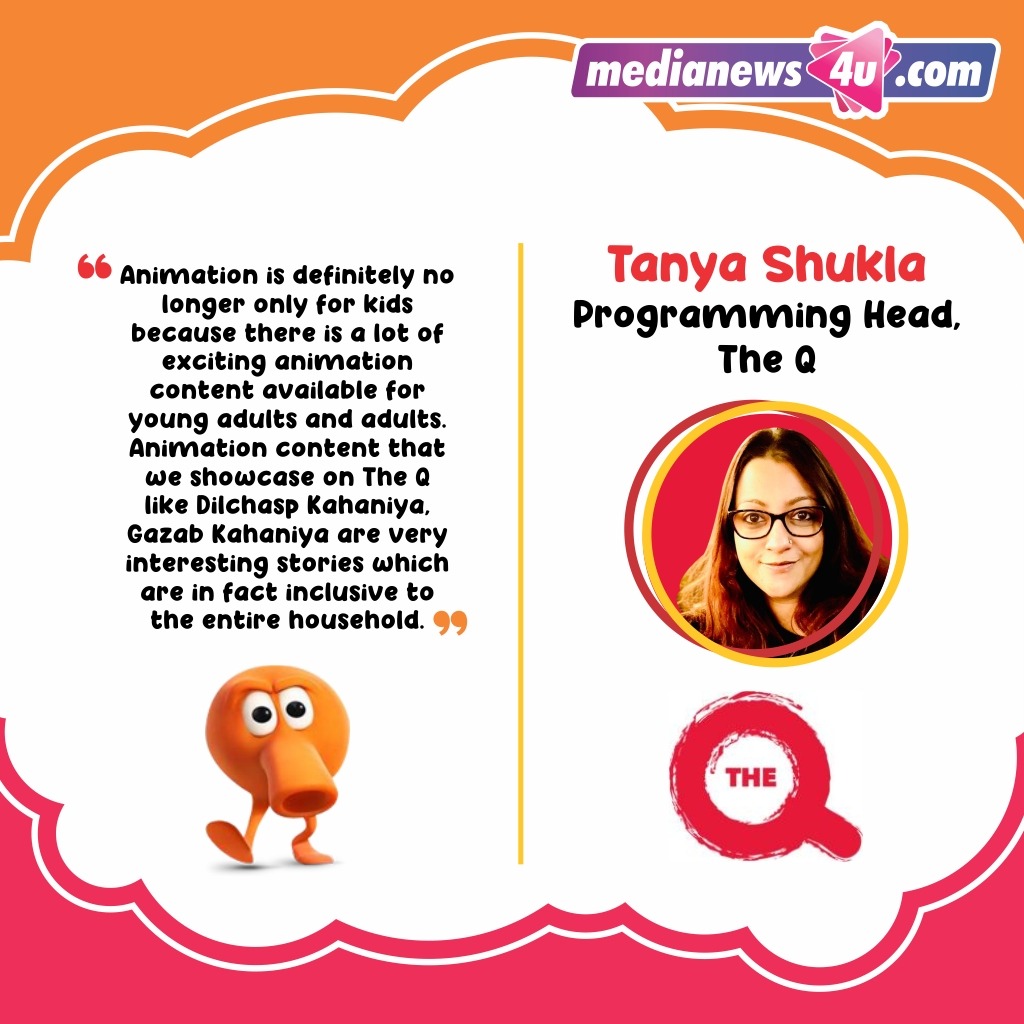 Anish: For the longest time, audiences have made the connection between animation and kids’ content, but the boom of the OTT space has proved that contemporary storytellers have used animation in various forms as a standalone medium and also within conventional live-action stories to give their unique signature to their content. We have seen the permeation of animation into music videos released by contemporary Indian musical artists. Within the OTT ecosystem, we have seen the acceptance of animation for content titles suited to more mature audiences such as a Bojack Horseman or a Castlevania, so that has opened up a larger playing space for Indian content creators looking to make stories in that format. 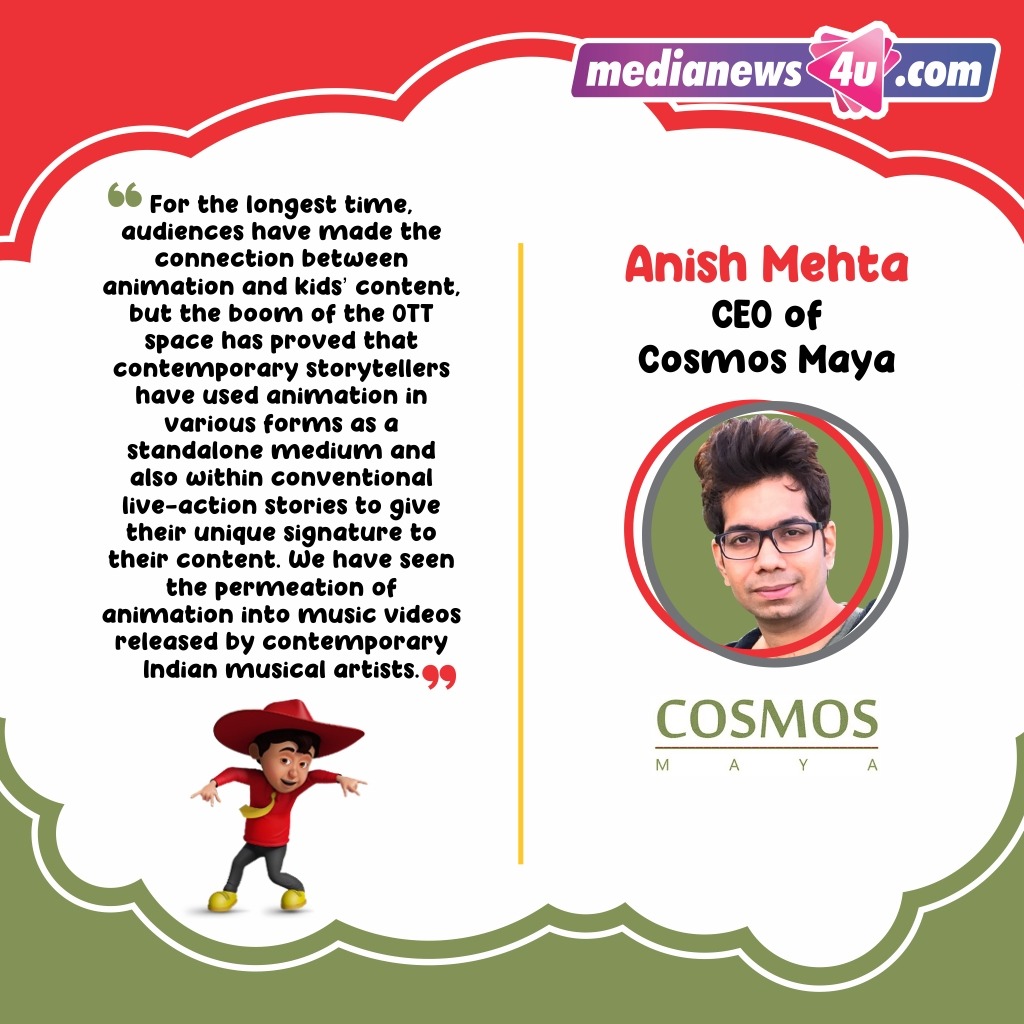 Are we going to see more and more Indian stories in animated versions not only for TV but also on the big screen?

Ronojoy: It all trickles down to the popularity of the characters. For example, if the characters from Taarak Mehta KkaChhotaChashmah become popular, we might see them in a movie very soon. The same goes for each of our characters on other popular shows as well. This is a trend we’ve seen right across the category, especially for ChhotaBheem and many such popular characters. What we, at Sony YAY!, have done is produce a lot/host of telemovies. These specials are a longer version of the popular animated series that exist on the channel. There is already an acceptance of this format of animated stories being presented on TV for an extended duration. This winning formula has seen us receive much better ratings for the telemovies that we produce and telecast on the channel. It is a matter of balancing the economies of scale when we see animated movies on the big screen in theatres because that’s a different ball game.

Tanya: The subject matter in all these shows is relatable to youth and adults. As a genre, the animation is definitely here to stay, grow and spread far beyond just the kid’s zone

Anish: The changing trends of Indian content consumption suggest a movement of the Indian entertainment industry in this direction. The translation of a big-banner Bollywood franchise like Dabangg into animated form has seen a stellar reception not just from the core kids’ audience but from family and youth audiences too. Home-grown animated stories have seen increasingly high demand over the past few years, with some of the highest-rated kid’s programs on Indian TV having been made in India. However, avenues for animation are to open up within Indian cinema and will not pan out before at least 3-5 years. Only Hollywood animation releases will continue to run successfully till then.

Ronojoy: The cost vs. quality dynamics for the animation industry varies from country to country. We see different territories having different models. The kind of volume of content that we produce in India is far higher than what is produced in the west/America. For example, we produced almost 107 episodes of Honey Bunny in the last financial year and these are 22 minutes’ episodes. If you look at the volume, which we are delivering, it makes up for the cost vs. quality debate that I mentioned earlier. So, I don’t think that we can compare ourselves cost-wise or quality-wise or we should compare ourselves in that respect to any other country because our working model and way of operating is completely different from the others. India has a unique animation industry and we work with certain cost dynamics that provide us the volume and a certain success rate. As long as the success rates of the shows match them, it is beneficial to everyone involved.

Tanya: I think animation is a medium of story-telling that is on the rise and not limited to kids. Development in technology has added great leaps to the production and impact of animation as a genre. Globally across visual mediums animation and live + animation have become the go-to genre for big-ticket projects for all age groups. It also takes away the fatigue of similar faces and known locations. So, yes, it is a time-consuming and detailed process however it also gives more flight to the imagination of the makers and as a result, is becoming a thrilling experience for the viewers. Animation is definitely co-inclusive and all-inclusive content in this day and age. 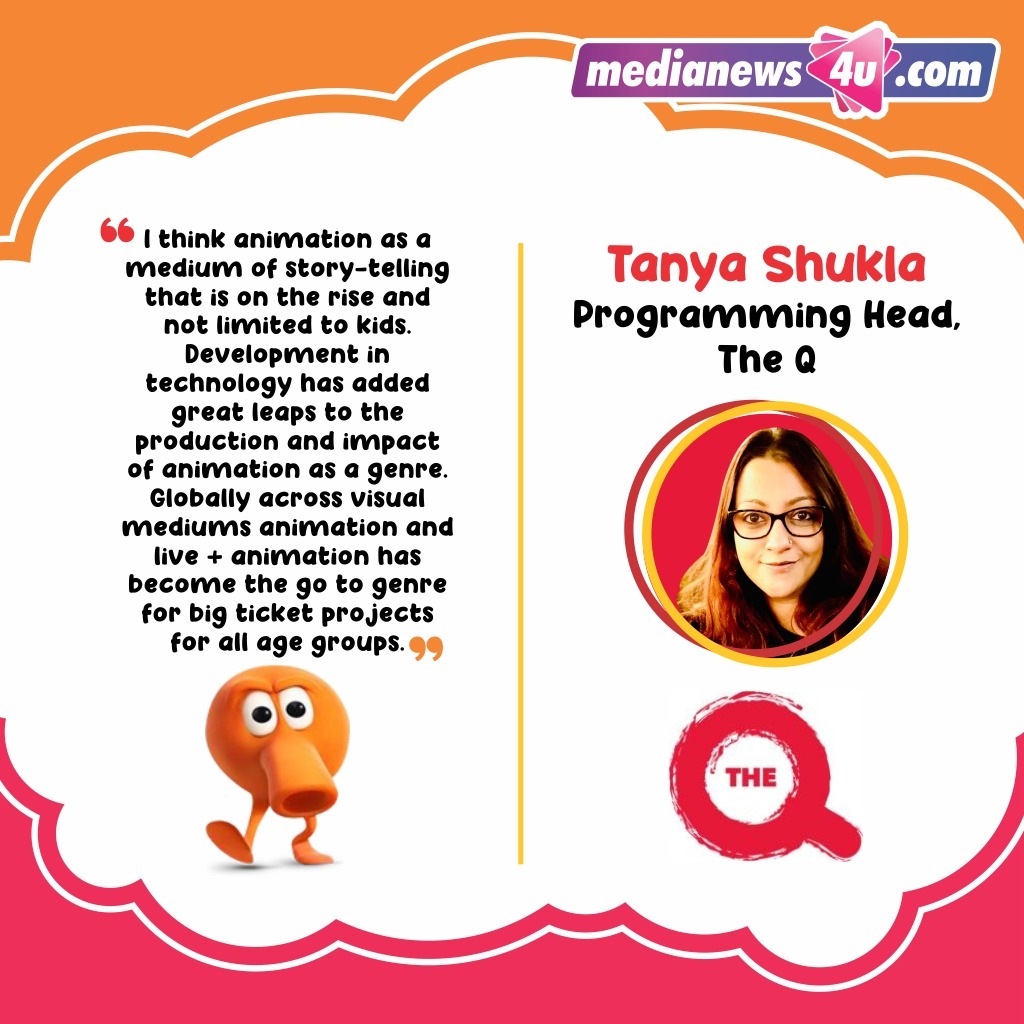 Anish: It is usually a matter of market demand. There is not a lot of sense for producers to venture into it currently as it is not economically worthwhile for them, especially for the big screen, since the majority of the animation audience in India is that of kids who are mostly consuming their content through their screens at home. This has reflected in the steady improvement of quality of production in both OTT and TV space, with shows such as MotuPatlu running strong for over 1000 episodes and a 13th season, showing how animation producers have their fingers on the pulse of kids’ audience tastes, and entering projects of superlative high value doesn’t maintain similar potential. The answer to this for Indian content producers is to deliver greater volumes of content across platforms and we have maintained our front-footing in both the domestic and international co-production market, which saw an original and homegrown title like EenaMeenaDeeka getting renewed for a 3rd season with Wildbrain Spark. 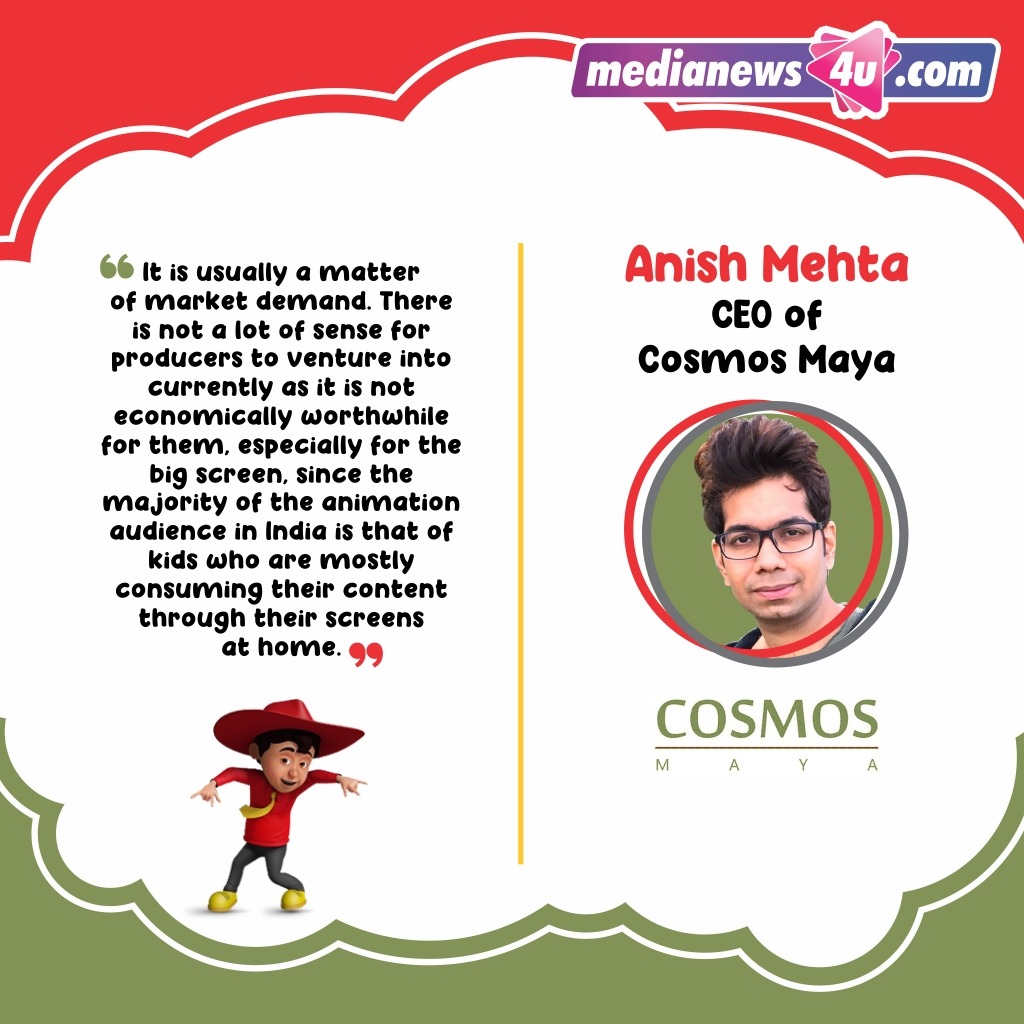 Mumbai: Music label Saregama and E-Major (Friday Filmworks’ music wing) have confirmed a strategic musical content partnership, where they will...

Celebrity endorsed advertisements grew by 23%, Akshay Kumar tops the list of most visible celebrities in 2021