Sony YAY completes 4 years in the Kid’s entertainment category, the channel has recently announced its mega release for the upcoming summer vacation with the new show *Taarak Mehta KkaChhotaChashmaah*.

In these past 4 years, the channel has scaled a mighty feat of prolific growth where we entered the cluttered Indian Kids Entertainment market with a unique proposition of being the only channel with 100% home-grown shows to now being a wholesome destination for kids with a robust library.  The year 2021 has begun with a barrage of new shows, each slated to entertain and tickle their funny bone with unique characters and hilarious narratives. Owing to this we have witnessed a meteoric rise with constant growth in our TSV and GRP numbers

Taarak Mehta KkaChhotaChashmah will bring iconic characters like Dayaben, Jethaalal, Bapuji, and Tapu into the realm of animation in a new avatar with fantastical twists.

Leena Lele Dutta, Business Head, Sony Pictures Networks India in a telephonic conversation speaks to us on the channel’s 4-year journey, the programming initiatives during the pandemic, the iconic show ‘Taarak Mehta ka Ooltah Chashmaah’ in an animated form, and much more…

It has been 4 yrs, how has the journey been?

Each year from the time we have launched, we were the last entrant in this entire category and it has been in fact even more of a challenge to mark a name for us in this space. I can proudly say that over the 4 years we have successfully achieved that peak and as we see each of these years have been completely different. Every time we see a high, there are external factors which determined like COVID, NTO, and things like that but we know we will always bounce back. We have had a great run in terms of the shows that we have launched over the 4 years. Our own IPs have arrived and have had a stellar resonance with the kids like Honey Bunny, Paap-O-Meter, our characters are much loved and as per our research, Honey’s popularity has now matched with Shin Chan’s of the world. So it is extremely heartening to see the response that actually comes from our audience. 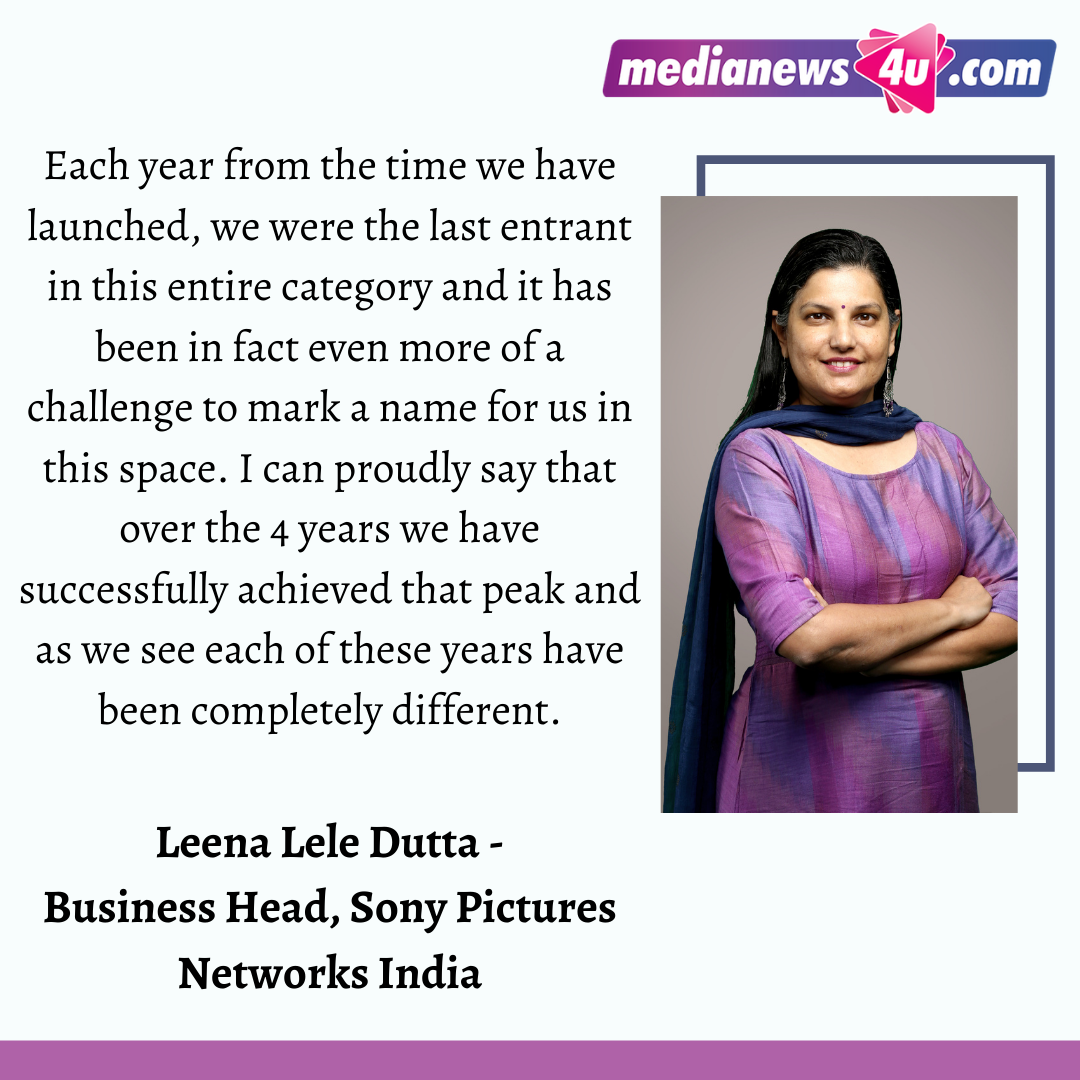 Post NTO did you see any disruptions regarding subscription to Sony YAY?

That was last year when the first part of NTO was introduced. In fact, the industry was also a little bit skeptical about this unknown factor that would have such a huge influence on the entire broadcast industry but for Sony YAY! As the Sony Network per se has a very very targeted product offering. From a packaging perspective, all our products, channels as a part of the NTO subscription drive, we did not have any issues in terms of distribution. 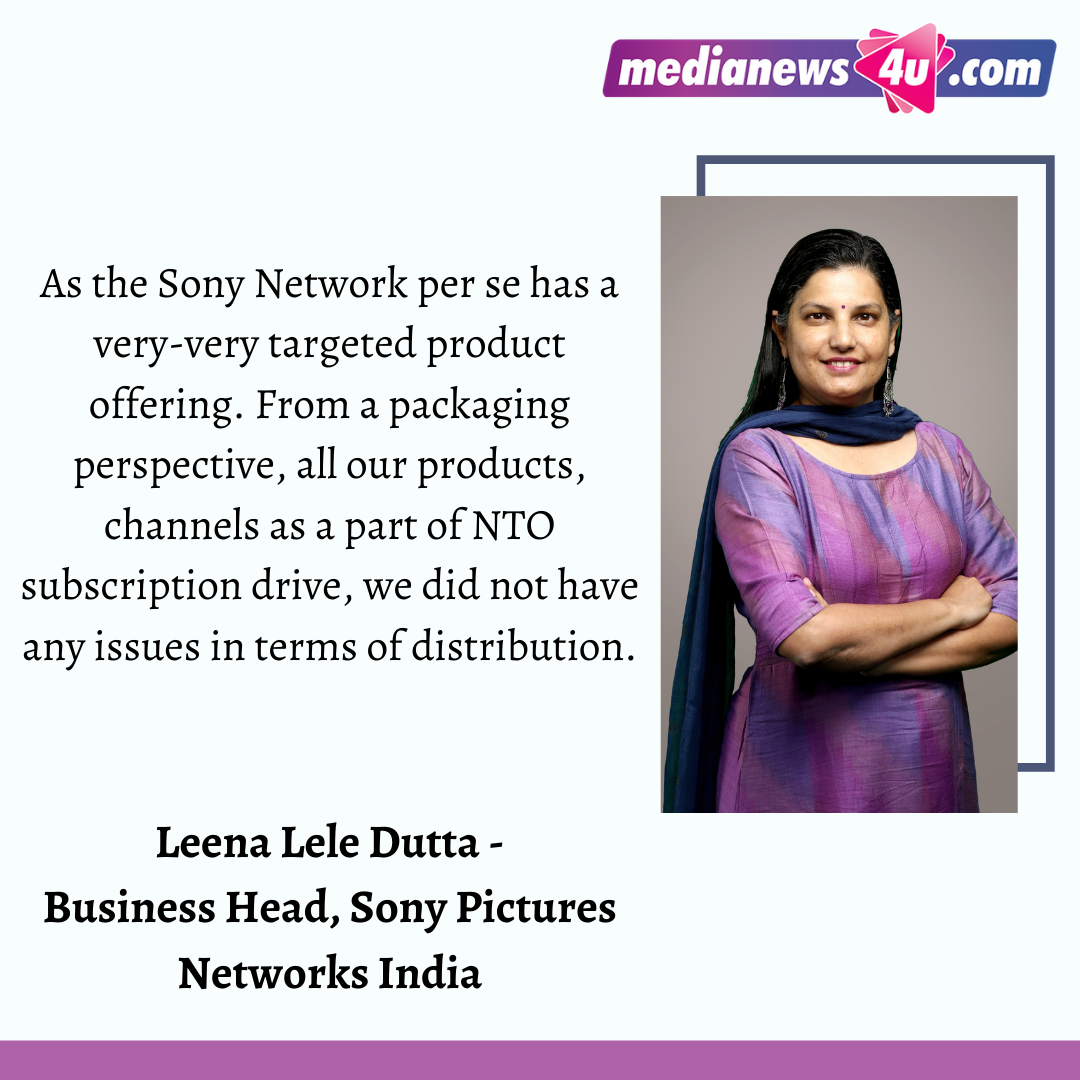 And of course, the whole idea for the channel to be launched after 20 years was to complete the distribution gap and we realized that how important it to cater to the child at home.

In the past year during the pandemic what were the content initiatives, you adapted to keep your audience entertained? What were the innovations in programming?

In the lockdown, it wasn’t only the kids, who were at home but parents who were at home too. In a typical one TV household, the remote was being snatched amongst core demographics which is the man of the house, a woman of the house, the kids. There was a lot of co-viewing that one witnessed during the lockdown, the parents were watching kids’ programming, the kids were watching GECand a lot more. And there was this whole abundance of GRP’s that were generated in the lockdown especially for the kid’s category was on an all-time high. It really touched its peak of 750 TRP, which was never done. 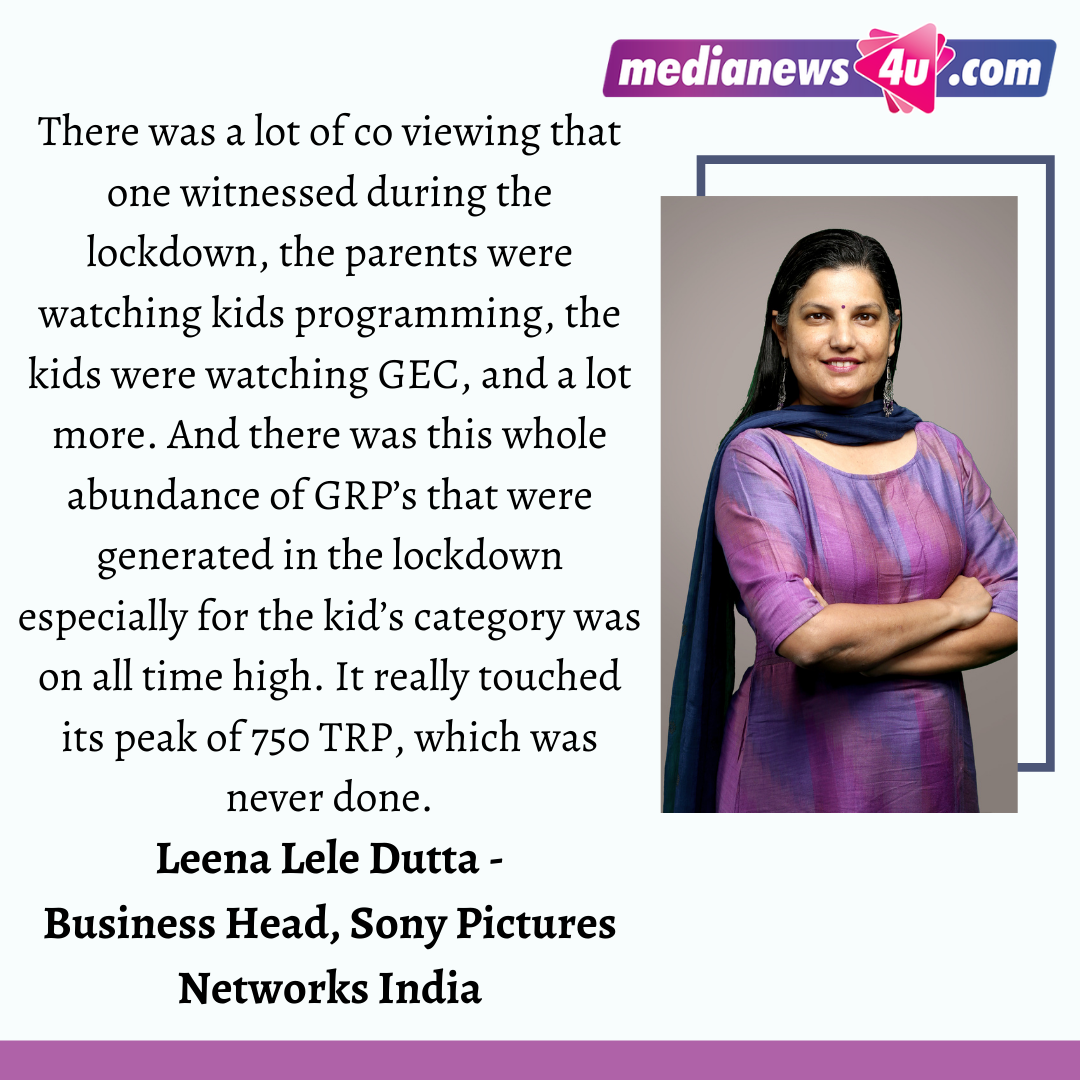 At that point and time kids have nothing to do, summer vacations, their schools were stopped, so we had to add programs to mingle enough to fulfill their exponential demands. We actually changed our strategy knowing for a fact that the lockdown was not there just for a month or 2. It is for longer and because of lockdown, kids are not going to school. So we kind of changed the programming strategy to reflect a whole lot of variety. We got a lot of new shows on the channel, in fact did a grand launch of existing shows and repackaged the shows, and kept the channel alive. So that the kid n the house doesn’t remove Sony YAY! We had to keep them entertained enough so that any time they come on they see the new characters.

From the marketing point, we very effectively created the content and did the DIY workshop on our YouTube channel and kept them engaged through the short form/ long-form content. It has been a year of challenges, it’s been a year of unique challenges and we learned a lot from it and hopefully this summer we are more prepared from a programming and marketing standpoint and giving the kids a much better menu of shows that we have. 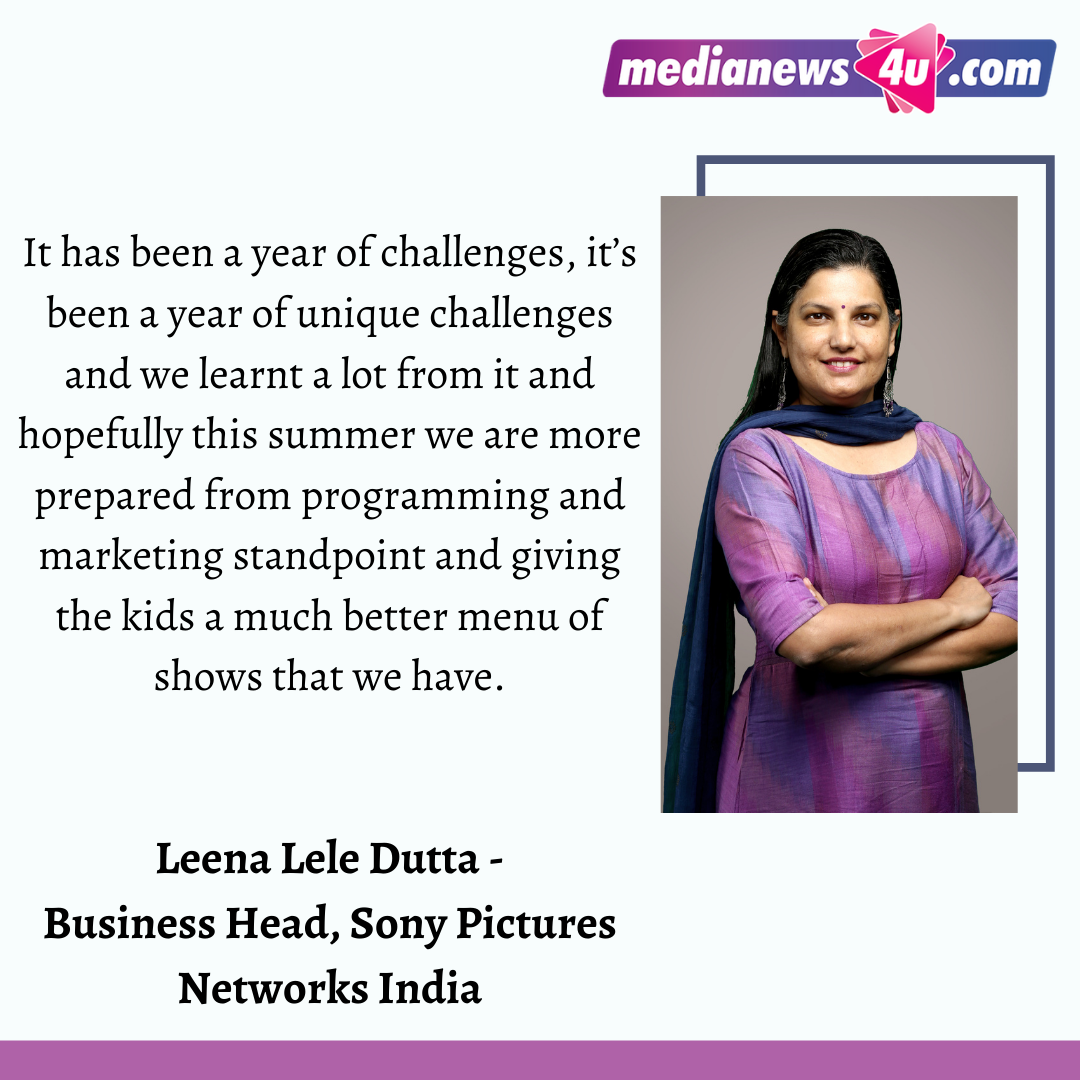 Recently you launched an animated version of TMKCC, the strategy behind this move?

The strategy was very simple like I mentioned earlier co-viewing was rampant and family staying together and the thought was as people started watching more of family-related content and Tarakis always been one show which has been a crowd puller for each and every member of the family, they really enjoy, laugh together, it’s very well relatable show. Ironically, the majority of viewers of Tarak on Sab TV are kids so what better platform for the kids and parents to get involved in a show that is relatable to them in an animated form. We had this need for a family entertainment animated show. We always identify the concept which is not currently done on any entertainment platform and a show which delved into the nuances of a quirky family was also not done so it just came together. 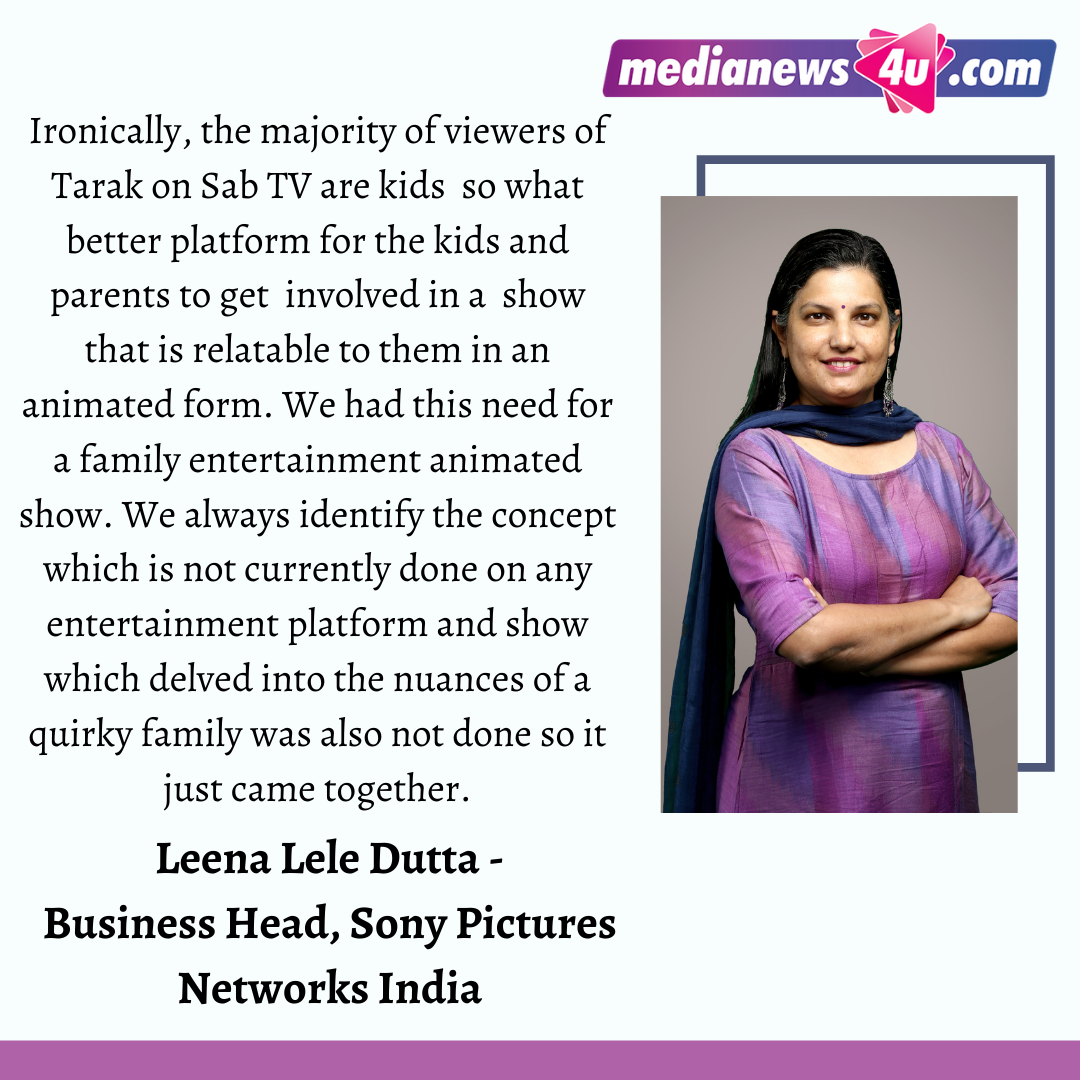 We have the show, right from AsitModi and we worked from entire redefining and reskilling of the show because it’s an iconic show and it has the characters set in a certain way and we could not have anything which was outside of the character wall and keep the integrity of the character intact even in the animated version. Keeping that in mind and getting to communicate with the kids in a language that kids understand is fun, humorous, and is identified with content with a layer of comedy and it was quite a challenge to get around reskilling the character and redefining the plug points. It’s completely different because it is something that kids will enjoy as well as the parents. The need-gap is there on the channel of a wholesome family entertainment animated show and what better show than Tarak to fill in the blank. 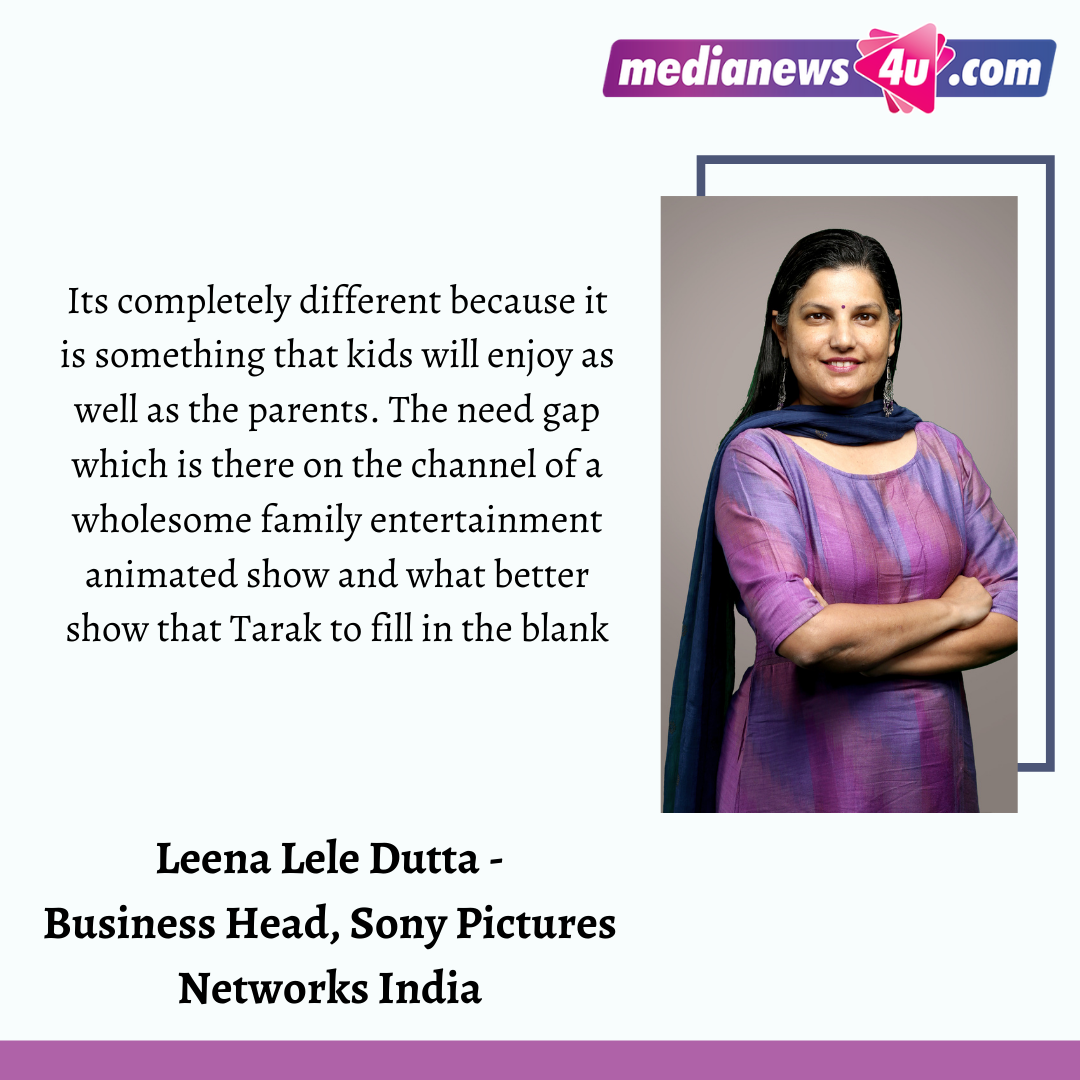 Sony in general is perceived as a very urban channel. Have you been at Sony YAY! able to penetrate the tier 3 market?

Absolutely, the biggest tool in animation that we have is that we are the only channel available in 8 regional languages. And other than toons have the character speak the languages that everybody identifies within that region. We recently launched Gujarati and Kannada and our Gujaratifeed we statistically launched it 3 months back prior to the Taarak launch as we wanted to hear that market.

For the first time, Taarak as a show is also kind of seen and heard in the Gujarati language over there. We got a phenomenal response in fact our market share was quite low before our Gujarati language feed. Now we are in the top 3 channel in that market. Likewise with Maharashtra, Kerala, West Bengal, so wherever we have our first-mover advantage in regional languages, is where we kind of cumulatively we are the first two channels in that market.

It is not urban as such because if you are looking in terms of the quality of animation it is far superior; it looks like an urban channel. But actually, 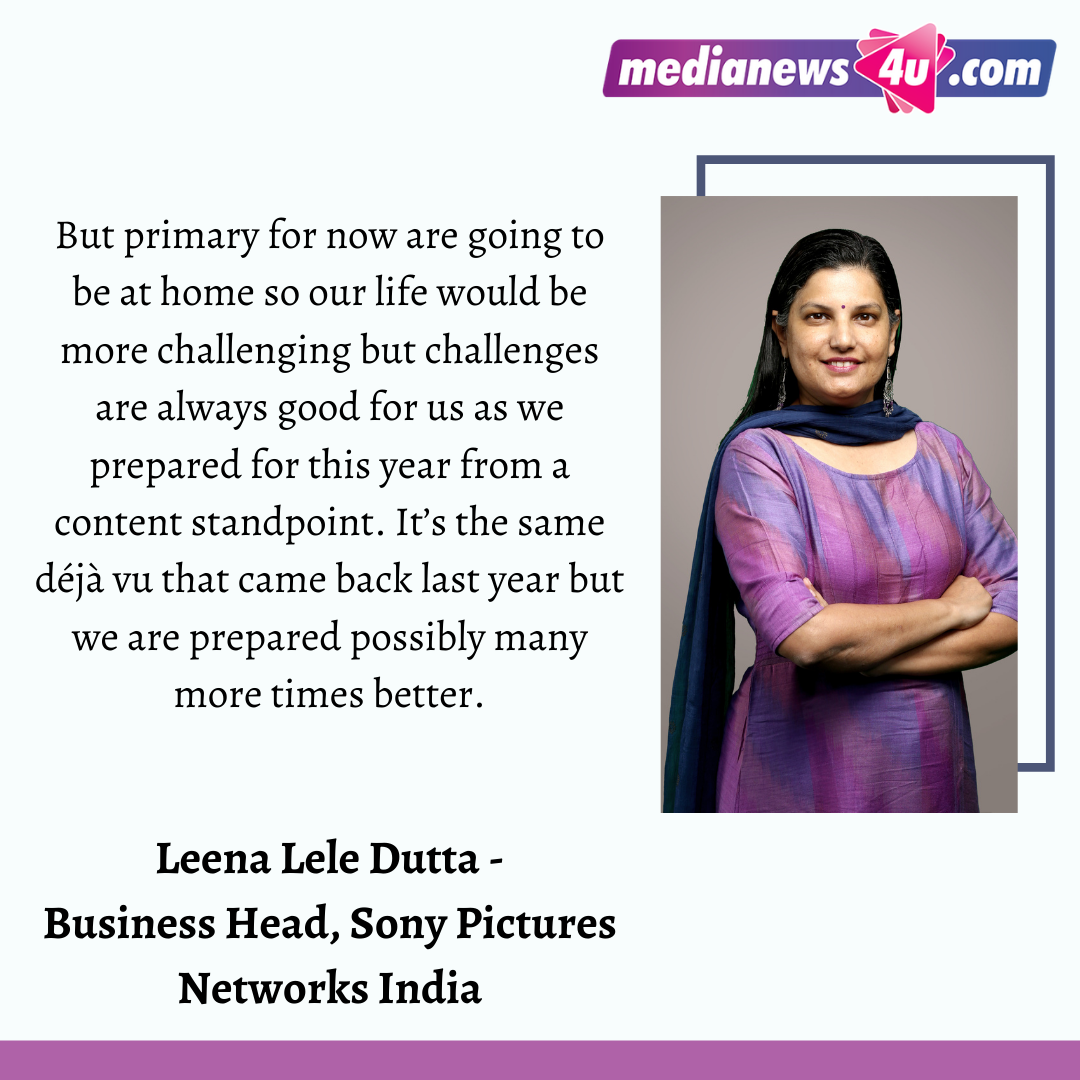 if you tune into the language feed, you kind of get a sense of the relatability of the content, it’s for the market and it is for everyone.

What would be your focus for 2021 now, how are you seeing it forward getting back to new normal now?

Unfortunately for kids, life will start in the morning online and online classes and coaching classes and all of that. So for them, going back to school I don’t think is a possibility in the near future. And I am not talking about the situation here in Mumbai and I am talking across the country. So even if there are places where the lockdown is not there or the curves actually flattened down.I think the secondary school actually starts and the school and it’s absolutely safe for kids to continue schooling, then I think primary will open up.

But primary for now are going to be at home so our life would be more challenging but challenges are always good for us as we prepared for this year from a content standpoint. It’s the same déjà vu that came back last year but we are prepared possibly many more times better.