The impact of Covid-19 on the Indian Economy has been disastrous, and recovery at the moment seems very far. Almost every industry has been down and out and is barely surviving by just scraping the barrel.

One such business of the M&E industry for which the long dark tunnel is still continuing with no visible light at the end is the multiplex and cinema business. Movie theatres across the country have only been bleeding ever since the lockdown began in March this year. And till date, the government has not issued any notice on when can movie buffs go back to enjoy their movies on the big screen. While some movies have gone ahead and released films on OTT platforms, there are some films that are awaiting the grand reopening of the box office.

Covid-19 has forced businesses across industries to innovate and improvise at various levels, and so we at Medianews4u asked the experts on the possibility and feasibility of drive-in theatres in India, in this two-part feature.

Chandrashekar Mantha, Partner, Deloitte India feels that this model may have some potential to drive a niche audience to step out and watch a film. He said, “The new consumer has changed from entertainment first to social distancing norms and personal hygiene as a priority. Outdoor drive through theatres would certainly provide the much-needed stimulus to the multiplexes as the audiences are yearning for the big screen experience again and maybe this would be a good model to provide them an experience within the safety parameters.”

Continuing Mantha said, “Some of the large players in the movie exhibition stream are already exploring the option to re-experiment with drive through theatres until resumption of complete operations. Whilst this model may have some potential in terms of driving a niche audience, and encourage people to step out to watch a movie, this alone will not be enough due to its limited scale and appeal at this point. However this could be potentially, be an additional stream of revenue that supplements the revenues for the exhibition sector.” 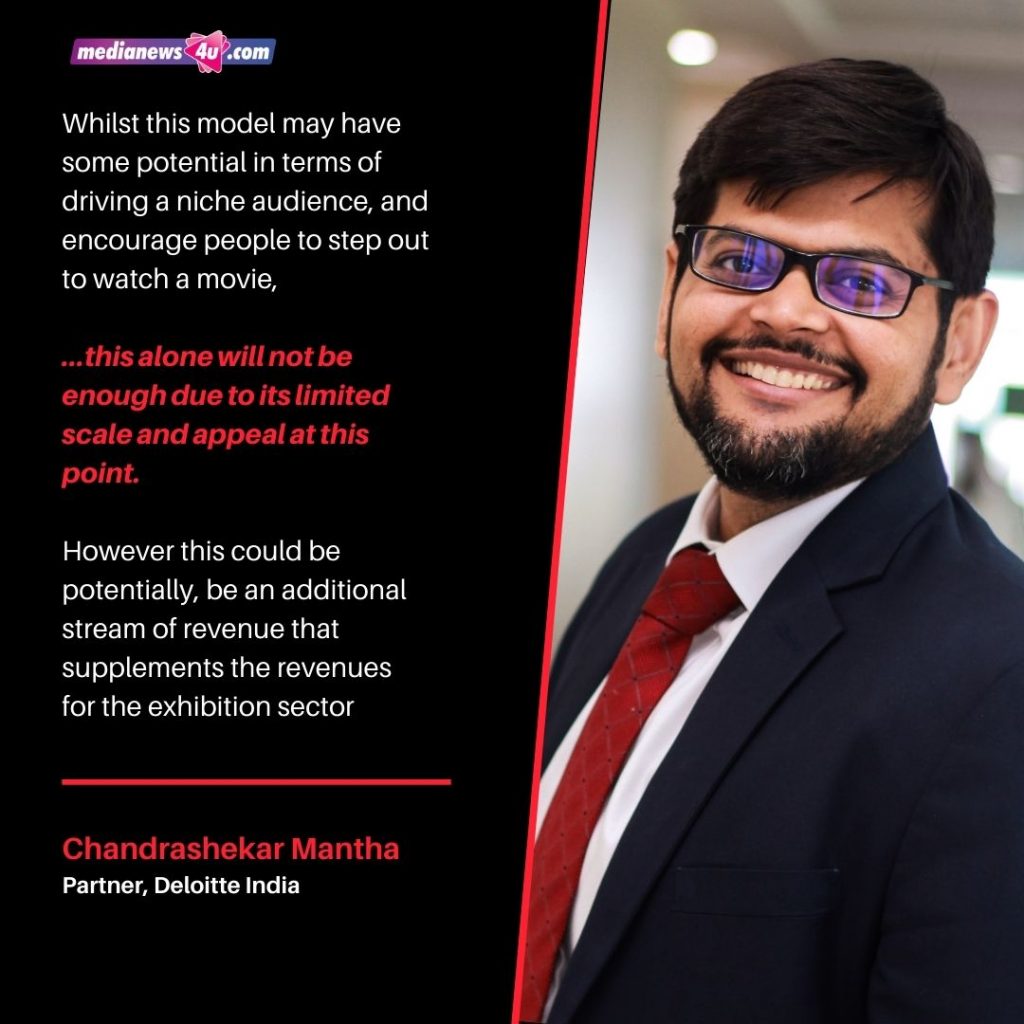 Whereas, financial analyst and expert, Karan Taurani of Elara Capital feels that, Drive-in is not a viable model which is why many of the Indian exhibitors are not exploring it.

Taurani said, “Whoever is exploring this model, is probably exploring it abroad, because they just want to give entertainment to people. It’s basically like a brand recall for people, because cinemas are not there, and the same brand is going for a drive-in cinema.” 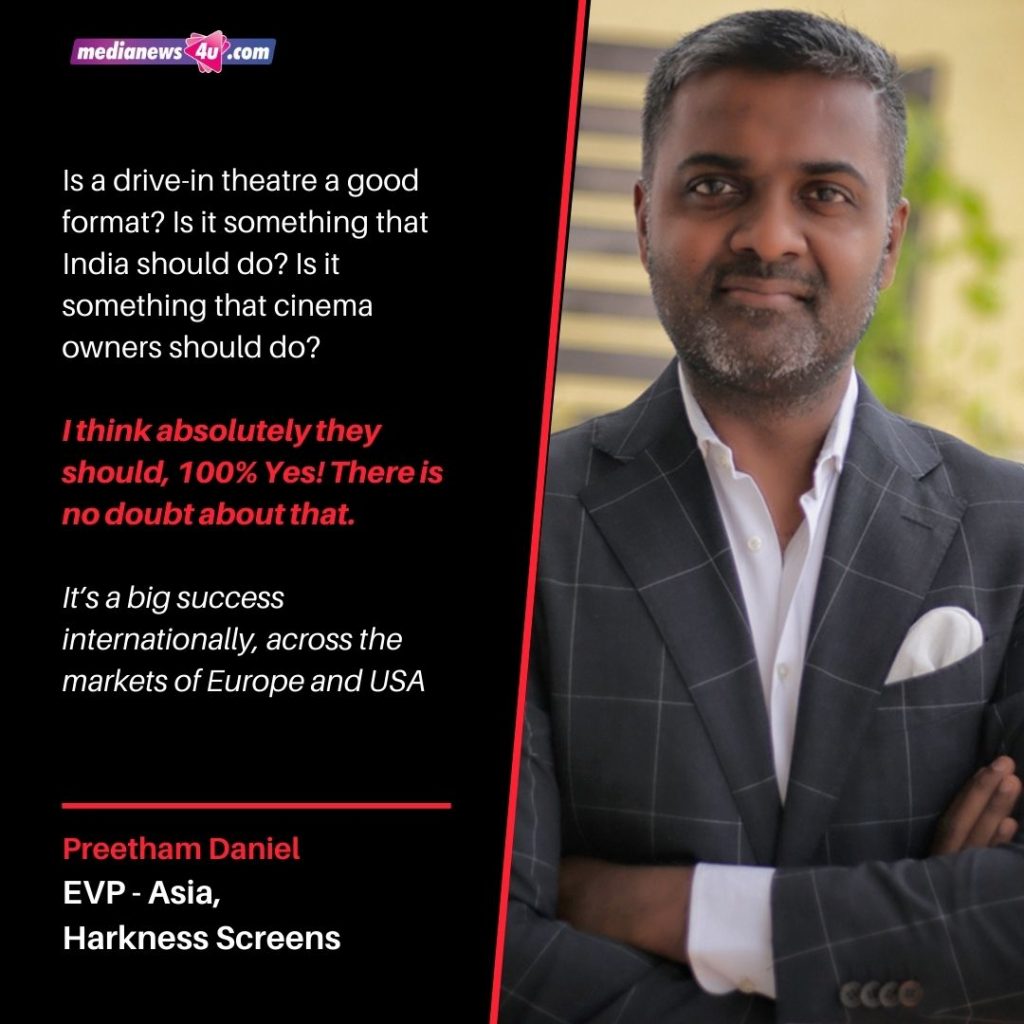 “I think that there is no reason to believe that it is not possible to do it in India. Some people spoke about weather, likewise, in Europe, the weather can be much more extreme than what we have in India. People spoke of pollution, but you know, pollution not such a big deal in India that, you know, it’s not killing. The point being, is it feasible? The answer is yes.”

Multiplexes missed the time! feels, Daniel, adding he said, “Will the cinemas do it now? I think, No, I think it’s gotten a little late, purely from a timing perspective. And the reason is now there is a lot of chat and talk about cinemas opening from the 1st of October, 2020, there’s no government order as yet. The point is, if as a cinema I open from October then my focus will be on what infrastructure I already have, and it’s not the time to re-invent the wheel or trying to do some more capex expense.  We may have lost an opportunity. You know, if somebody had jumped on the wagon and decided to open a drive-in theatre in July or even early August, I am sure it would have made some revenue.”

Gautam Jain, Partner Ormax Media, feels that since India is primarily a two-wheeler market, profitability might be impacted.  He said, “Drive-in theatres, wherever operational in the country, will not be able to help the cause of Multiplexes. Setting up new drive-in theatres at a Pan India level seems difficult at this stage for any multiplex operator. Outdoor Drive-through theatres work on a larger scale in countries which have higher car ownership. India, being a primarily two-wheeler market, probability of large scale success of Outdoor Drive-through theatres is limited.” 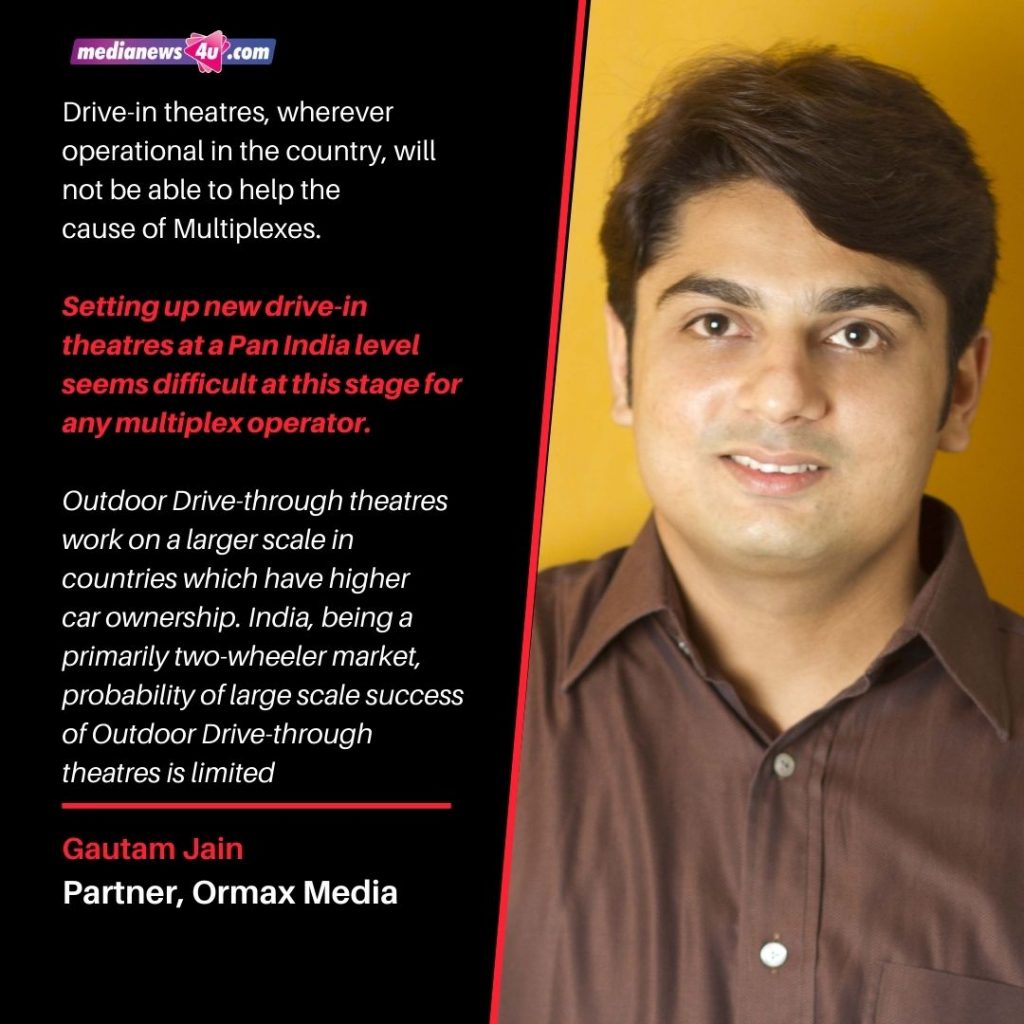 For an overall view on whether this makes financial sense for Indian exhibitors or for even an event management company, Chandrashekar Mantha, Partner, Deloitte India shed light on the all-important numbers and said, “The entire model will need a lot of cogitation before making the decision. There are multiple cost components to consider like, rental cost, size of land, equipment capex, climatic conditions, capacity, timing to fill in & out all vehicles, number of profitable shows one can exhibit in a day, ticket prices, food and experience costs depending on the differential experience a drive in would want to offer. Overall investments can vary based on the targeted cities as well as the experience the exhibitors want to provide to their patrons. This could typically range from INR 3 to 5 crores and can go up to INR 8 to 9 crores per property. This will be a high capex and operational cost model, which will consequently influence the ticket prices, affordability and profitability.”

“One good approach may be to pilot a project in a city with opportune weather conditions and test the waters for the ticket price appetite with the audiences for a differentiated experience. Smaller cities with lower real estate and set up costs may be a good starting point; it will also help adding more screens in a market like India that has lower screen count and density.” 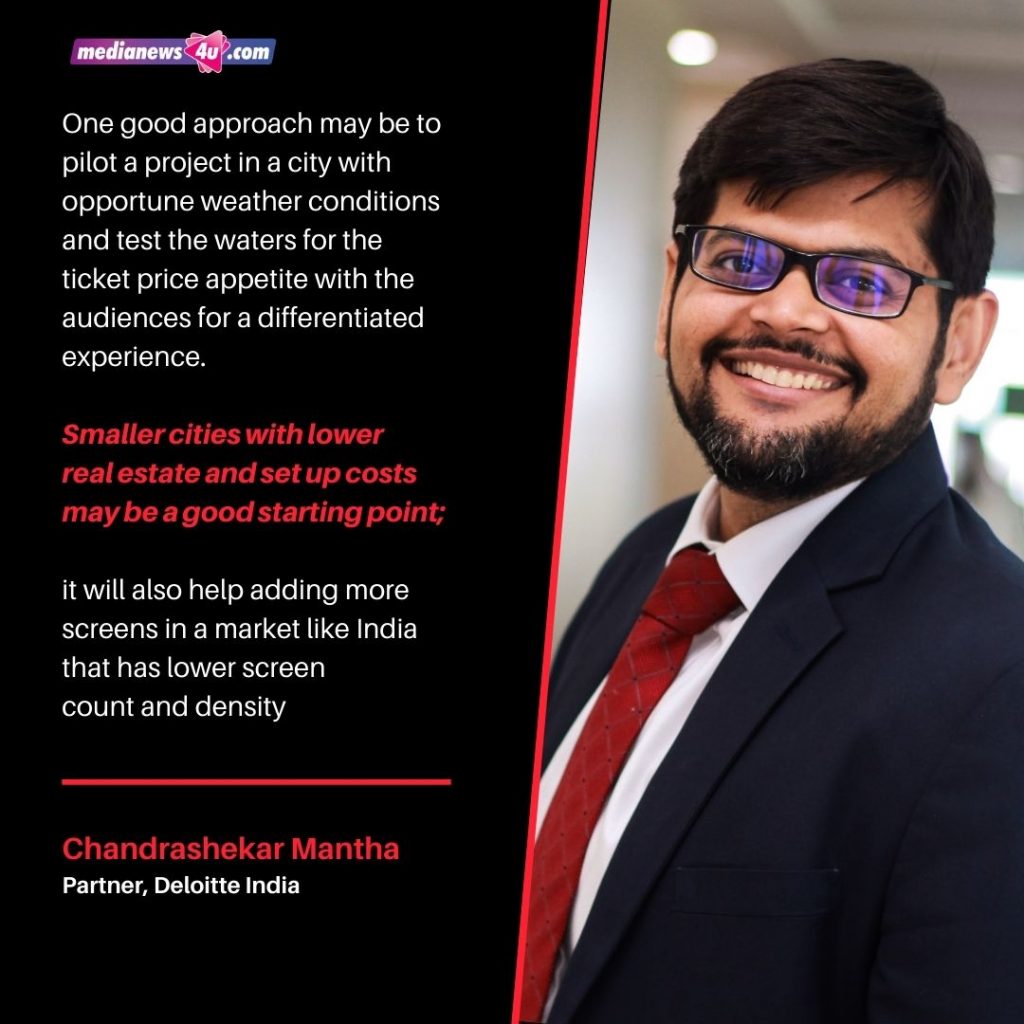 Preetham Daniel, Executive Vice President, Asia at Harkness Screens opines that a drive-in theatre is a two or maybe a two and a half crores of investment, to open one auditorium. In a market like this, our industry has been shut, there’s no business, there’s no revenues for the last five, six months. He said, “Where do I want to use my investment? Of course, I want to just retain my complexes and my employees so I can, make more money that can fit in.”

Gautam Jain, Partner Ormax Media said, “New films need a Pan India wide release in more than 2000 screens, which will not be possible with drive-through theatres release only. Additionally, there is a huge risk of piracy for new films. Hence, studios would wait for multiplexes to be allowed to open for releasing their upcoming films, especially the bigger ones. The Drive-through viewing experience works well for older, classic films which hold good repeat viewing appeal for the audience.”

On the limitations or challenges with this model, Chandrashekar Mantha, Partner, Deloitte India said, “The challenges such as limited capacity, space, number of shows in a day considering the time and weather constraints, capital intensity, price sensitivity of majority of the patrons, this model may cater to a very niche segment. Whilst exhibitors may continue to explore this option as well as related opportunities in terms of advertisement, brand activations as well as possible extensions of this concept to supplement their existing business model.”

“Exhibitors should equally or more focus on ensuring best in class safety and personal hygiene to instill confidence in their stakeholders as well as patrons to restore and scale up their primary business.”

While these are really hard times for exhibitors and cinema chains, enterprising companies such as Zee Live and Zee Studios are bringing an outdoor movie experience to movie buffs just next month! Talking about this offering, Swaroop Banerjee, COO – Zee Live said, “Our first on-ground event in Gurgaon and Bangalore under our flagship IP Supermoon – Supermoon Drive In. Pegged to be India’s Largest outdoor movie experience, ‘Supermoon Drive In’ will be hosted from October 2-4, 2020 with 10 shows over 3 days in 2 cities – Backyard Sports Club in Gurugram and Phoenix Market city in Whitefield, Bangalore. This show will enable audience to step out and watch the movie from the comfort and safety of their cars – Romantic action movie Khaali Peeli’ starring Ishaan Khatter & Ananya Panday will premiere at the show. In Bangalore, the ‘Supermoon Drive In’ will premiere ‘Ka Pae Ranasingam’ starring Vijay Sethupathi and Aishwarya Rajesh on Friday, 2nd October.” 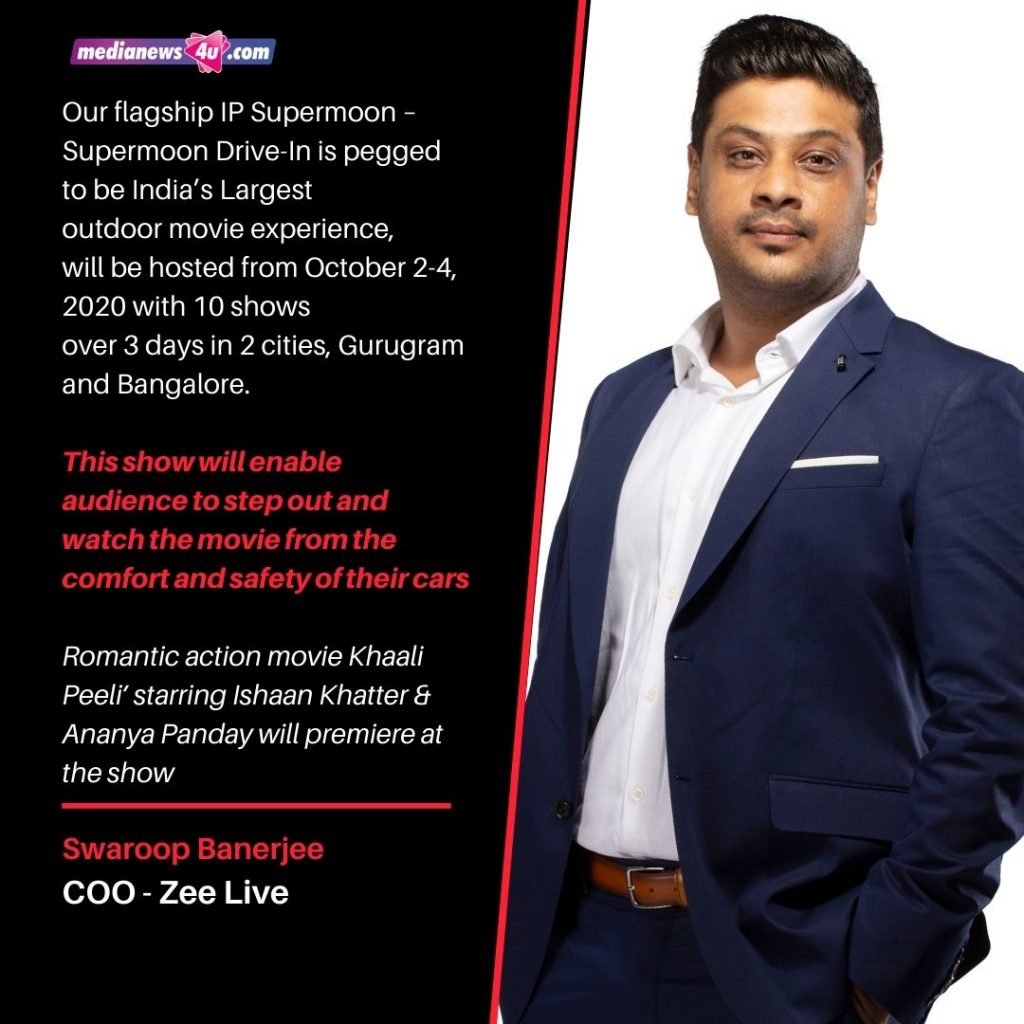 While we all patiently wait for multiplexes to open, the Supermoon Drive-in initiative by Zee Live would certainly test the waters for an outdoor film experience.

Stay tuned for part two of this in-depth feature on the drive-in theatres in India.