According to BARC and Nielsen’s report titled, Crisis Consumption: An Insight into TV, Digital and Audiences India witnessed an overall increase in TV consumption by 37% in week 12 starting 21st March 2020. This number came to light after PM Modi announced the nationwide lockdown to curb the spread of the fatal coronavirus.

TV Viewership significantly grew on the subsequent days of the lockdown announcement. On Wednesday 24th March it grew by 40%, on Thursday 25th March by 45% and Friday 26th March by 41%. It also was recorded as the highest TV viewing in minutes at 1.20 trillion minutes, where average daily viewers grew by 62 Mn. Another startling fact that was shared by BARC was that 622 Mn viewers watch TV daily for 4 hours and 40 minutes and hence growth was seen across all parameters.

A 38% increase was noted in the number of channels watched from 16 to 22. Average daily reach in minutes too increased from 560 to 622 which translates into a straight 11% increase. 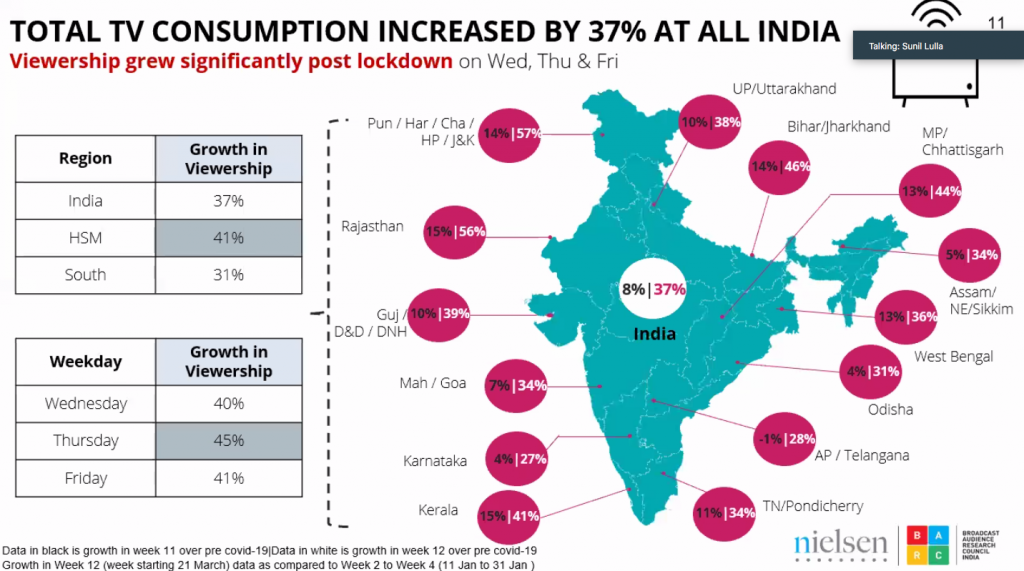 Non-Prime time viewership in India witnessed enormous growth with 71% increase in week 12 during Covid 19 period data when compared to week 2 to 4 which is pre-Covid-19 period data. The Non-Prime Time viewership surge in HSM market peaked to 83% while the surge in South stood at 54%.